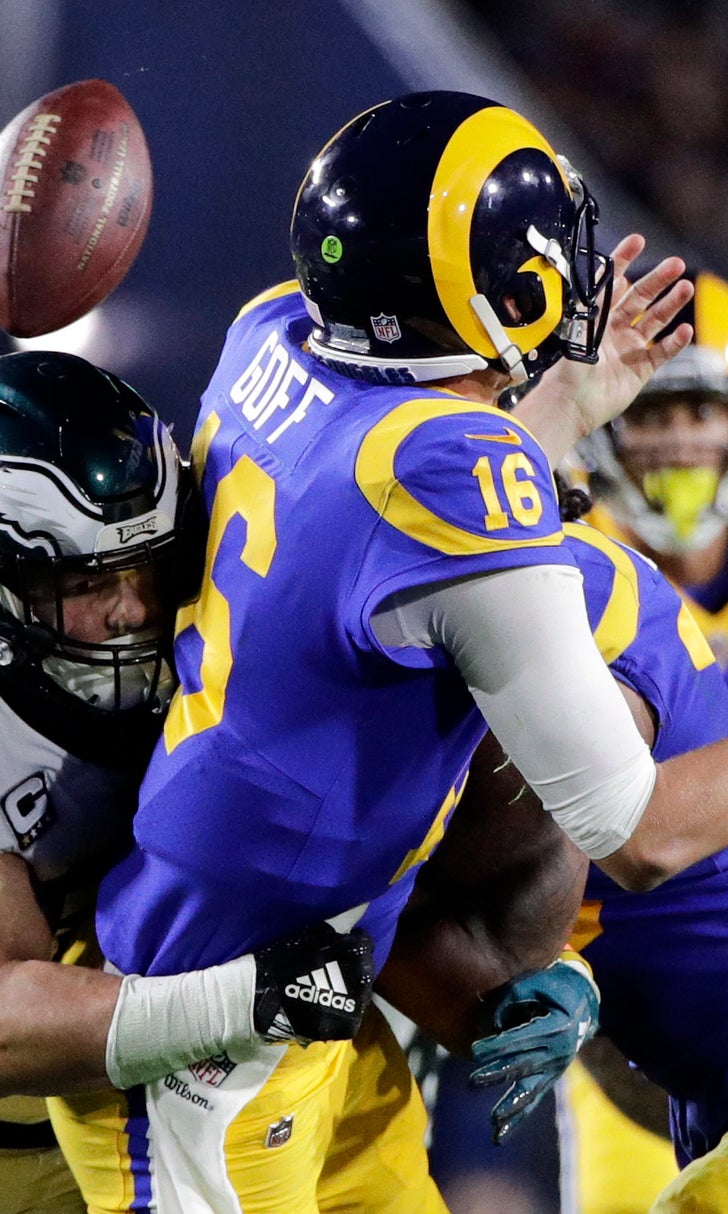 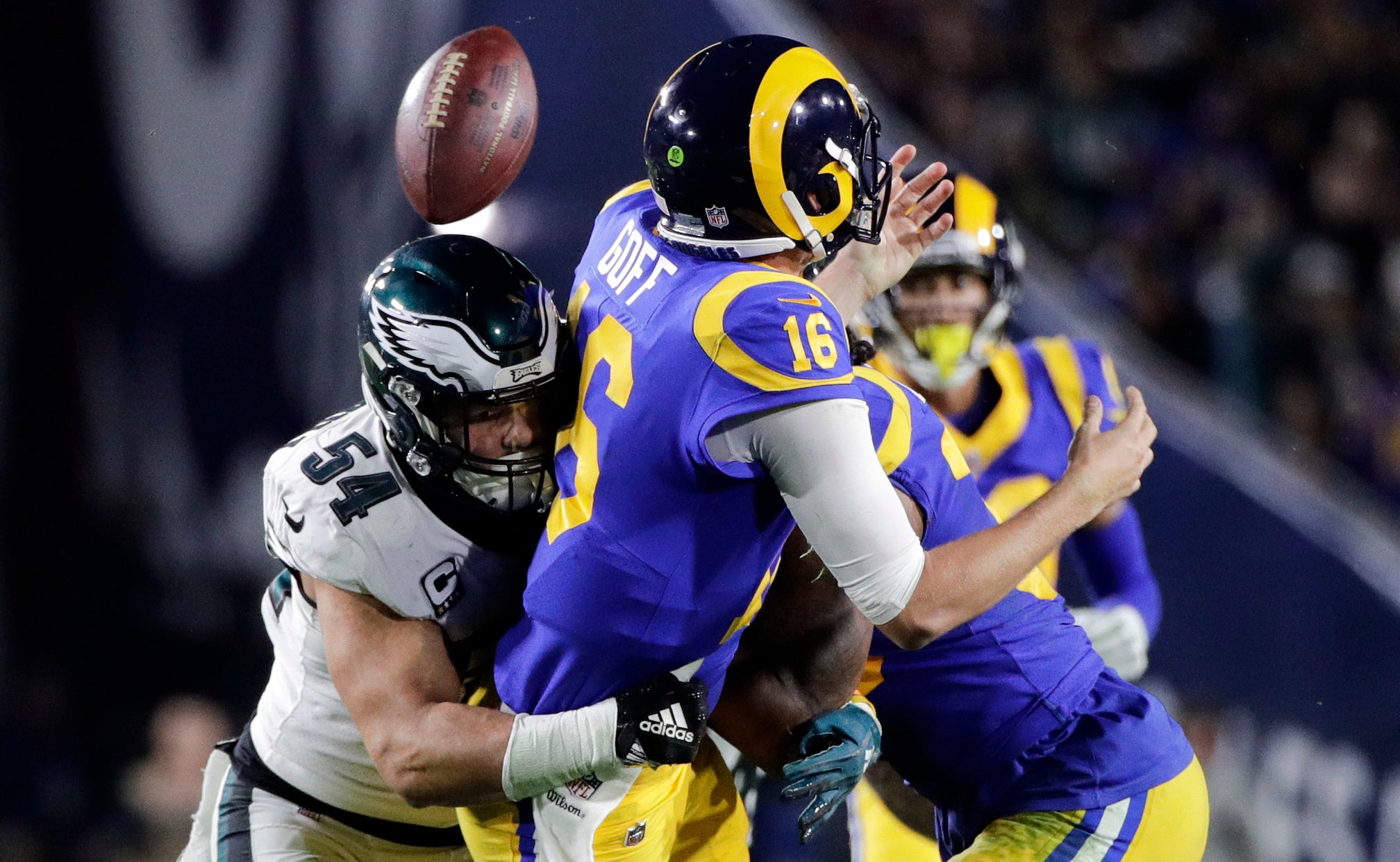 LOS ANGELES (AP) — The Los Angeles Rams are experiencing something they hadn't in Sean McVay's two seasons as head coach: a losing streak.

Philadelphia's 30-23 win at the Los Angeles Memorial Coliseum on Sunday night marks the first time under McVay that the Rams have dropped back-to-back games, something that seemed unfathomable after they defeated Kansas City 54-51 on Nov. 18. The Rams were 10-1 and tied for the league's best record when they went on their bye week, but haven't been the same team since, as they've dropped two of three.

Los Angeles (11-3) has had a playoff spot sewn up for a couple weeks, but no team wants to be stumbling with the postseason drawing near.

"It's hard to argue against that based on the way we've played. Your tape is your resume and we haven't played as good as a team," said McVay when asked if the bye week ended up knocking his team off its stride. "Guys are making decisions and mistakes we typically haven't seen. This wasn't good enough and it is a tough pill to swallow."

The epitome of the Rams' struggles has been Jared Goff. The third-year quarterback went into the bye week second in the NFC with a 113.5 passer rating, but he has been in a slump since. Over the past three games, Goff has completed only 55 percent of his passes, has six interceptions to only one touchdown and a 51.3 passer rating.

"We have been seeing a little bit of everything in terms of fronts and coverages. It is nothing we haven't seen before, but teams are mixing it up. At the same time we are beating ourselves and we have to figure it out," Goff said.

Goff — who was 35 of 54 for 339 yards and two interceptions — had a brutal third quarter in which he completed just 3 of 9 passes for 24 yards. He also had one of the ugliest turnovers of the season late in the quarter. On third-and-1 on the Rams' 34, Goff tripped over the foot of center John Sullivan and fumbled the ball, but he was able to recover. As Goff got up to throw, his half volley was intercepted by Eagles defensive end Brandon Graham at the Rams' 28 and returned 16 yards.

Two plays later, Wendall Smallwood scored from 4 yards out to extend the Eagles' lead to 30-13. It was the largest deficit the Rams have faced at home this season.

The Rams have a minus-three turnover ratio in their three games since the bye after being plus-11 in their first 11.

McVay said that Goff has to make better decisions, like taking a sack and punting it instead of making things worse.

The Rams rallied in the fourth quarter and had a chance to tie it on the last play, but Goff's pass to the end zone, which was intended for Josh Reynolds, was incomplete.

"It's good to go through some adversary at some point. We are in the playoffs, but we have to be urgent about getting these things fixed, but they are very fixable," Goff said.

Los Angeles did try to establish the run game early, but had to abandon it when it fell behind. Todd Gurley was out for part of the third quarter after tweaking his knee but he did return.

Gurley, whose first-quarter touchdown made him the third Rams player to score 20 TDs in a season, said he was fine after the game.

The secondary has been susceptible to big plays most of the season and Sunday was no exception as Foles had five completions of 18 yards or more. Alshon Jeffery had eight receptions for 160 yards, which is the third-most receiving yards he has had in a game for his career.

Los Angeles still controls its destiny for a first-round bye, but New Orleans (11-2) could take a huge step toward getting home field throughout the playoffs with a win at Carolina on Monday night. Even if the Panthers were to win, the Rams would need to win their final two games at Arizona and against San Francisco and need the Saints to lose either to Pittsburgh or the season-finale against Carolina to get the top seed because New Orleans has the tiebreaker after beating the Rams earlier in the season.

A Tale Of Two 5-2 Teams
The Rams and Bears are both 5-2, but after their Monday night matchup, it's clear both teams are on different levels.
6 hours ago

Herd Hierarchy: Week 7
Another week, another new No. 1 team in Colin Cowherd's 'Herd Hierarchy.' Find out who's in front heading into Week 7.
5 days ago