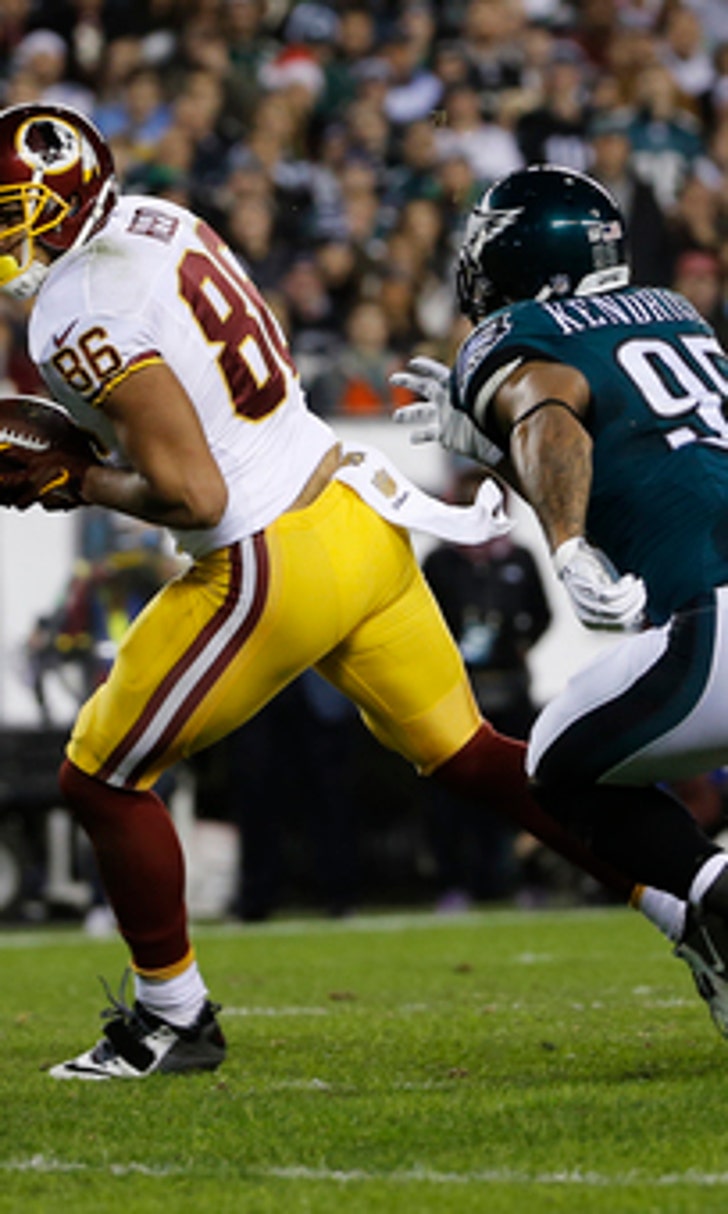 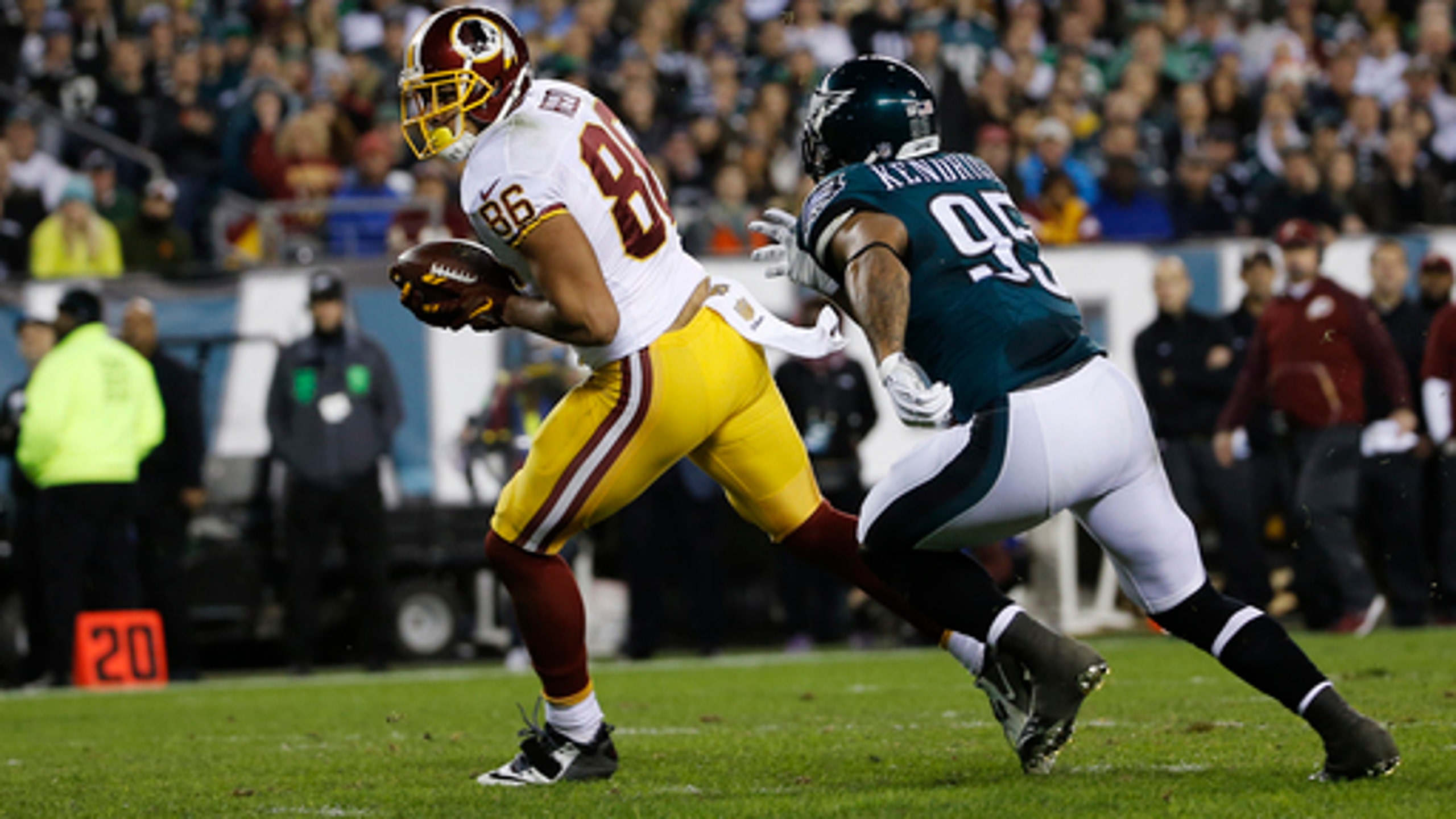 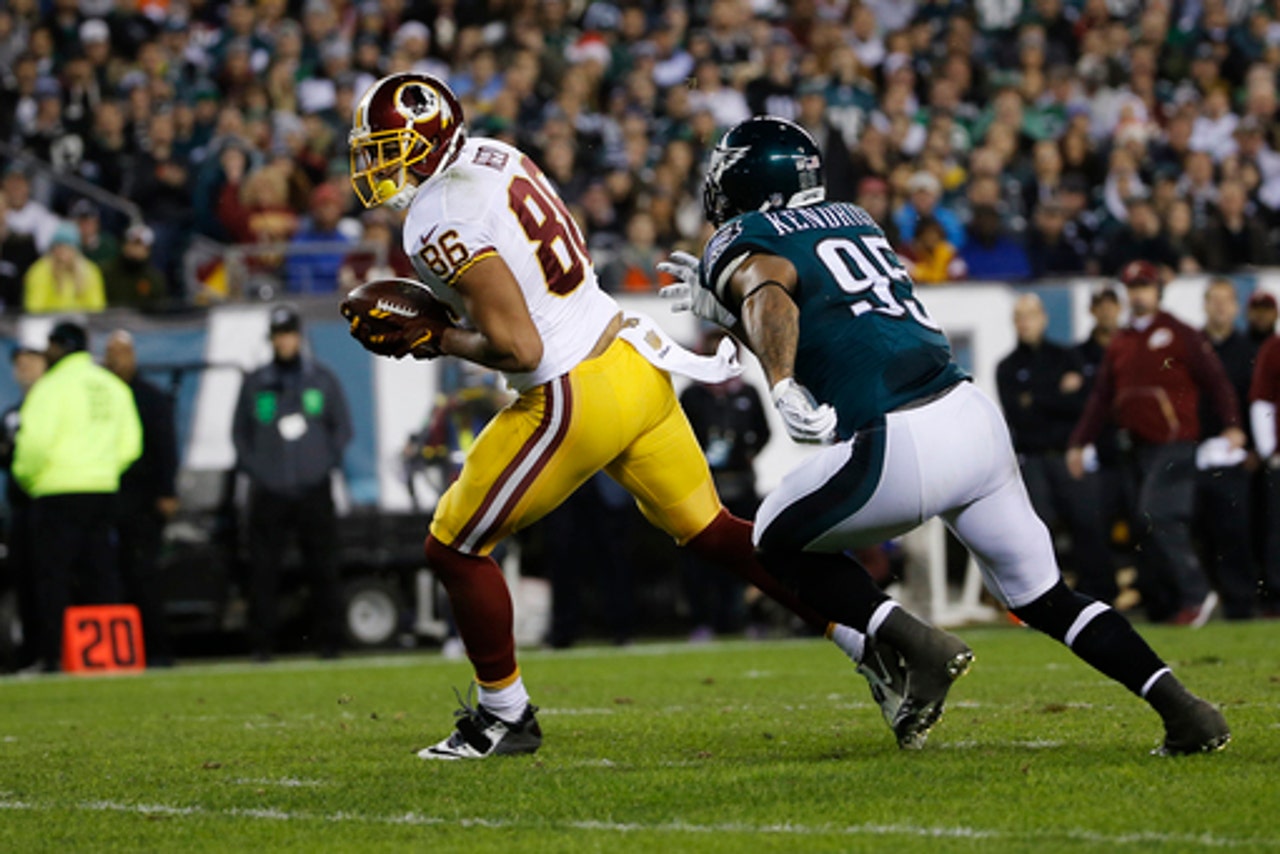 WASHINGTON (AP) Jordan Reed's route-running and pass-catching skills have never been in doubt - just his durability.

Figuring the tight end's talent outweighs any lingering questions whether he can stay on the field, the Washington Redskins signed Reed to a five-year contract extension Thursday that will start with the 2017 season. It's worth up to about $50 million, including $22 million in guaranteed money.

''It means a lot that the Redskins invested that kind of money into me and think that highly of me as a player and as a person. That means a lot to me,'' Reed said during a conference call. ''I'm going to show them that they made a good investment, and I'm going to prove them right.''

Reed emerged as one of the NFL's elite tight ends last season, finishing with 87 catches for 952 yards and 11 touchdowns - team-highs in each category, the first player at his position to lead the Redskins in all three in nearly 40 years.

He was particularly dominant down the stretch as Washington made a push for an NFC East title, compiling 38 catches for 498 yards and six TDs over the club's final five games, including the wild-card round loss to the Green Bay Packers.

''I feel like (offensive coordinator) Sean McVay was calling some great plays at the right time for us and things like that, and I was able to capitalize on it,'' Reed said. ''And I felt like my body was starting to peak around the end of the season. I was feeling real fresh and explosive.''

That has not always been the case for him as a pro.

A third-round draft pick out of Florida, Reed, listed at 6-foot-2 and 237 pounds by the Redskins, played in a total of only 20 of 32 games over his first two seasons, sidelined by various injuries. But he improved considerably in that regard after spending time during last offseason working out with Redskins left tackle Trent Williams and other NFL players in Texas.

Including the playoffs, Reed played in 15 of Washington's 17 games; it might not be a coincidence that the two he missed because of a concussion, in Week 5 at the Atlanta Falcons and Week 6 at the New York Jets, accounted for the Redskins' only two-game losing streak of the season.

''When I talk to (the Redskins) nowadays, it really doesn't come up,'' Reed said about any health concerns. ''I just want to move on and show that I can play 16 games.''

Reed, whose rookie contract expires after next season, said negotiations on a new deal began shortly after the postseason loss to Green Bay. He really wanted to stay with the Redskins, but started wondering whether the team would have enough salary cap space to fit in a big contract for him after adding free-agent cornerback Josh Norman.

''It was a concern when they signed Norman, because of the cap room and things like that,'' Reed said. ''I guess they made it work out and they were able to give me what my agent was asking for at the time.''

Keeping Reed fits with general manager Scot McCloughan's commitment to retaining Washington's top young players, including long-term deals last offseason for Williams and outside linebacker Ryan Kerrigan. Now the issue is whether McCloughan will be able to agree on a multiyear contract with starting quarterback Kirk Cousins, slated to play next season under the franchise tag.

''I just feel like Kirk is a real accurate passer, man. He also can read the defense really well,'' Reed said. ''I feel like I can create separation for him and get open. ... Those are some reasons why we were effective last year.''

Rivers Retires After 17 Seasons
After 17 years in the NFL, Philip Rivers is calling it a career. Is the Hall of Fame next for the trash-talking fan favorite?
27 mins ago

Jettisoning Watson
Should the New York Jets mortgage their draft future to land Deshaun Watson in a trade with the Houston Texans? Some say yes.
2 hours ago

How To Win $500,000 on Bucs-Packers
Jason McIntyre breaks down the NFC Championship and offers his tips to help you win big in this week's Super 6 contest.
20 hours ago

Members Only
How far would a win over Tom Brady go toward cementing Aaron Rodgers' legacy? Skip and Shannon have differing opinions.
21 hours ago

Playing Catch-Up
Lamar Jackson and the Ravens crashed out of the playoffs again. Is a true No. 1 receiver the answer to their postseason woes?
1 day ago
those were the latest stories
Want to see more?
View All Stories
Fox Sports™ and © 2021 Fox Media LLC and Fox Sports Interactive Media, LLC. All rights reserved. Use of this website (including any and all parts and components) constitutes your acceptance of these Terms of Use and Updated Privacy Policy. Advertising Choices. Do Not Sell my Personal Info