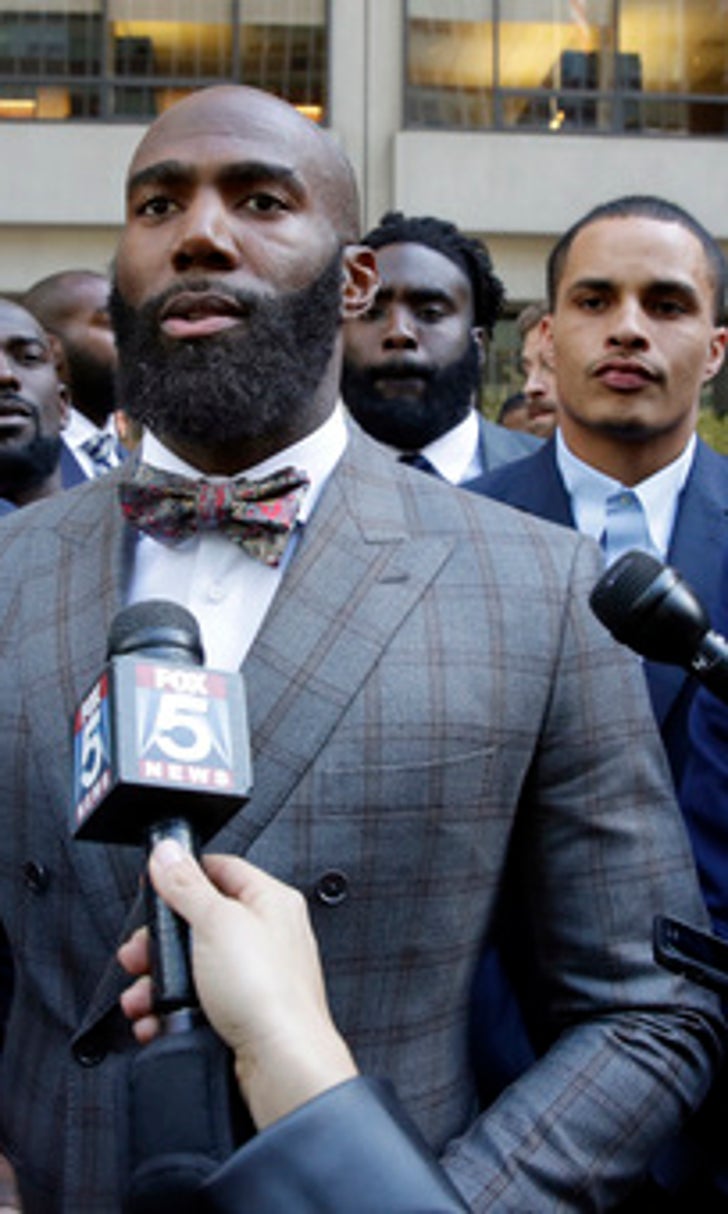 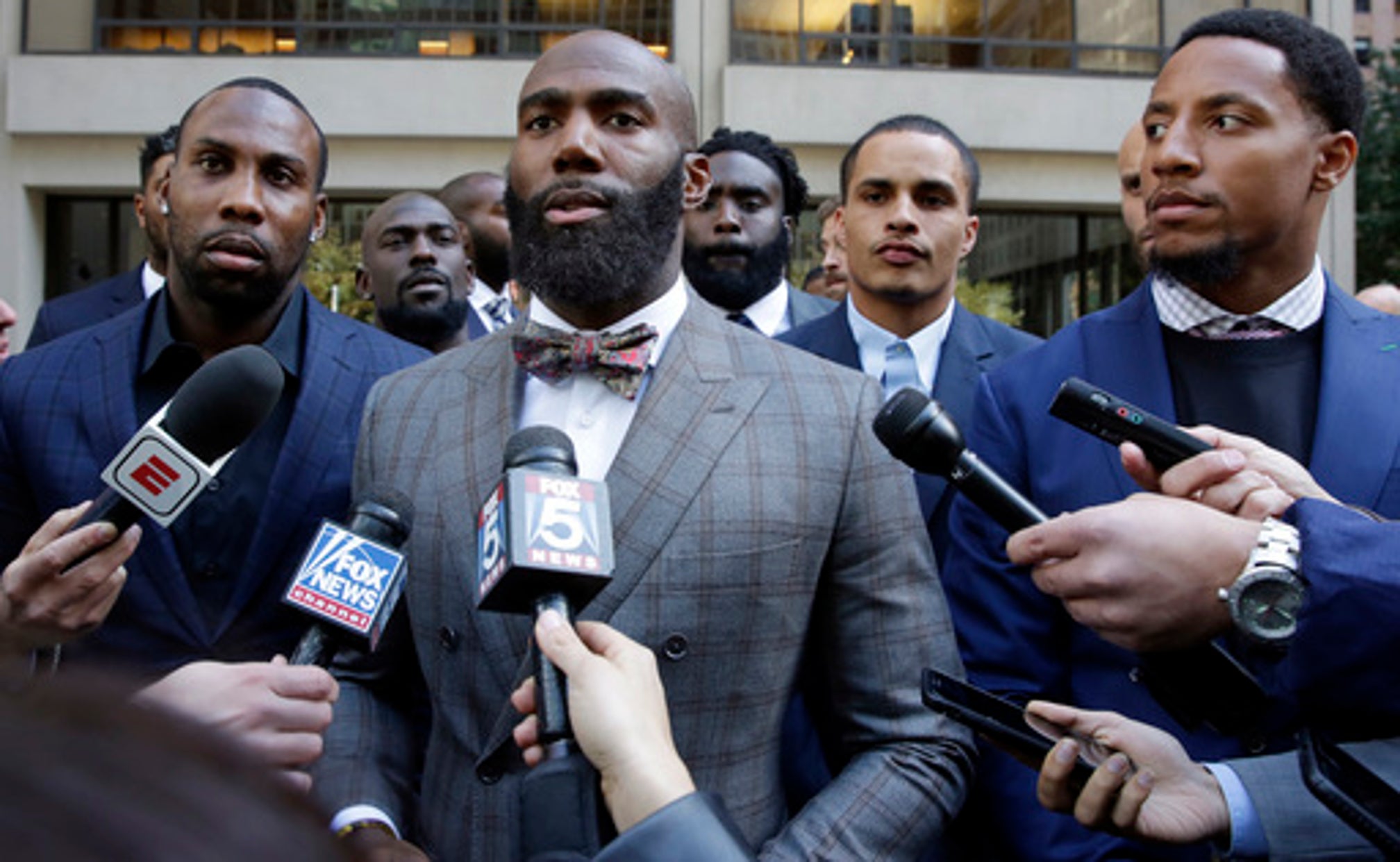 What was not discussed at any length was the divisive topic of the national anthem that has caught the attention of President Donald Trump.

''We spent today talking about issues that the players are trying to bring attention to,'' NFL Commissioner Roger Goodell said. ''That was the entire focus.''

Asked if the players committed to standing during the anthem, Goodell responded: ''We did not ask for that.''

Trump criticized the NFL again Wednesday on Twitter, writing that ''The NFL has decided that it will not force players to stand for the playing of our National Anthem. Total disrespect for our great country!''

A group of 11 owners and more than a dozen players met for more than two hours at the league's headquarters. Among the topics discussed was enhancing the players' platforms for speaking out on social issues.

''We heard what they had to say and they heard us,'' Miami Dolphins owner Stephen Ross said. ''It's open talks and that's a good thing.''

The NFL's policy on the national anthem did not come up. That policy states that the players ''should'' stand for the anthem, and some have suggested the league would seek to change that to ''must'' stand. Goodell said in a memo to the teams last week that the NFL prefers for players to stand during ''The Star-Spangled Banner.''

''Very little of the meeting was about the actual anthem,'' Eagles safety Malcolm Jenkins said. ''We were really more talking about solutions and how we get the results that we want to get.''

Goodell spoke briefly before heading to further league meetings. He emphasized the commitment on the part of the players and the NFL ''to work together on issues of social justice.''

''Our players are men of great character,'' he added, ''and they have a deep understanding and tremendous knowledge of the issues going on in all our communities. This is something our owners said we want to support you in.''

Butler, who played Monday night in Nashville before attending the meeting hours later, said both sides are headed in the right direction. He said the players delivered ''our perspective. Obviously it's a different perspective. I think that's the most important thing when it comes to these issues is perspective and respecting everyone's rights regardless of how they feel.''

The players' union and the league issued a joint statement just before the annual fall owners meetings began. The owners meetings continue Wednesday, when the anthem could be discussed.

''Today owners and players had a productive meeting focused on how we can work together to promote positive social change and address inequality in our communities,'' the statement said. ''NFL executives and owners joined NFLPA executives and player leaders to review and discuss plans to utilize our platform to promote equality and effectuate positive change. We agreed that these are common issues and pledged to meet again to continue this work together.

''As we said last week, everyone who is part of our NFL community has a tremendous respect for our country, our flag, our anthem and our military. In the best American tradition, we are coming together to find common ground and commit to the hard work required for positive change.''

Jenkins has been one of the leading spokesmen among the players, as well as highly active in the community. He said the discussion was about ''everything to do with the state of the NFL now, obviously anthem protests, activism that players have been doing, and how we can move this forward to really amplify players' voices and amplify these issues and make some long sustainable changes.''

''I'm not sure we're close to a resolution, but conversations are ongoing,'' he added. ''It went from just phone calls to obviously this is the first time meeting. So I don't think we could come up with a whole plan and solution in two hours, but we are happy that these things are happening. We're looking forward to the opportunity to really put a good plan together.''

Earlier, outside of the hotel where the owners are meeting, two dozen supporters of Black Lives Matter New York held a rally backing the players for speaking out - particularly former 49ers quarterback Colin Kaepernick for kneeling during the anthem last year in protest of racial injustice in America. Demonstrations during the anthem increased when Trump called the players unpatriotic if they knelt during the anthem, with both players and league executives saying the meaning of the protests has been misconstrued by the president and his supporters.

At a game earlier this month, Vice President Mike Pence walked out of Indianapolis' Lucas Oil Stadium after several 49ers knelt during the anthem.

Jenkins said after the meeting that Kaepernick had been invited by the players but didn't attend.

Also Tuesday, Dallas Cowboys owner Jerry Jones was confronted by two people in the lobby of the Manhattan hotel where the owners are meeting. The protesters shouted at him about the issue of white supremacy while Jones was surrounded by bodyguards. Jones stopped to listen but said nothing, and the protesters were peacefully led away.