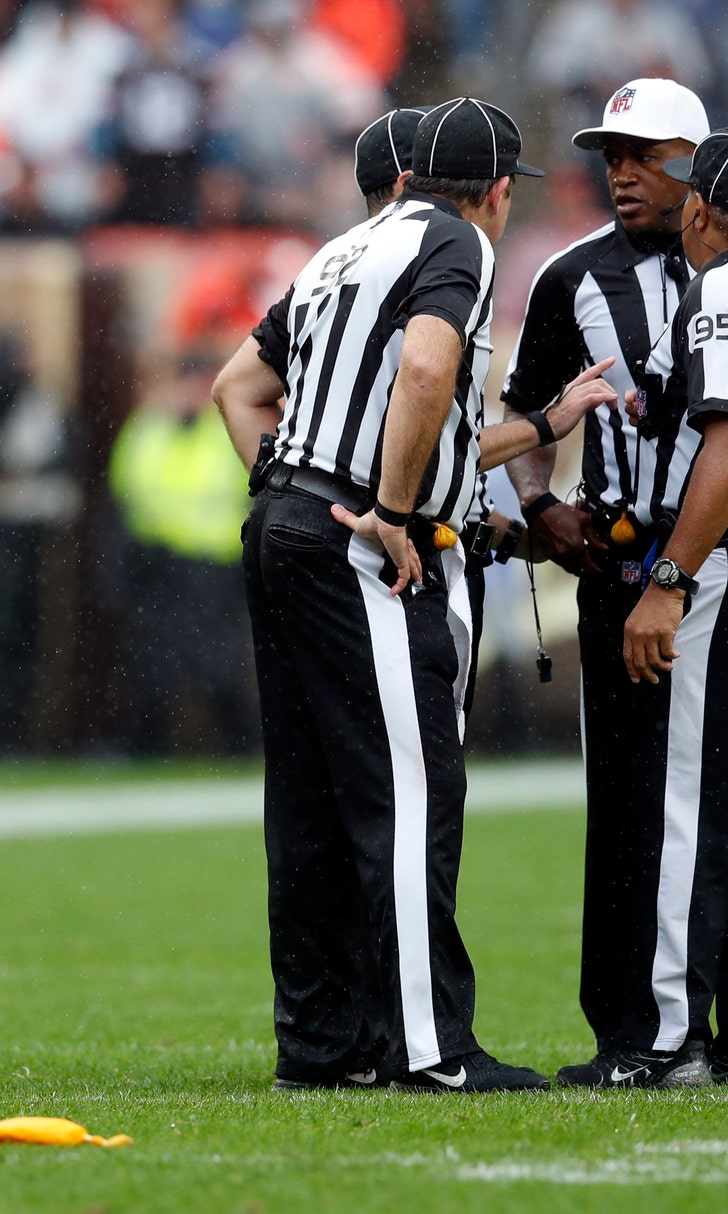 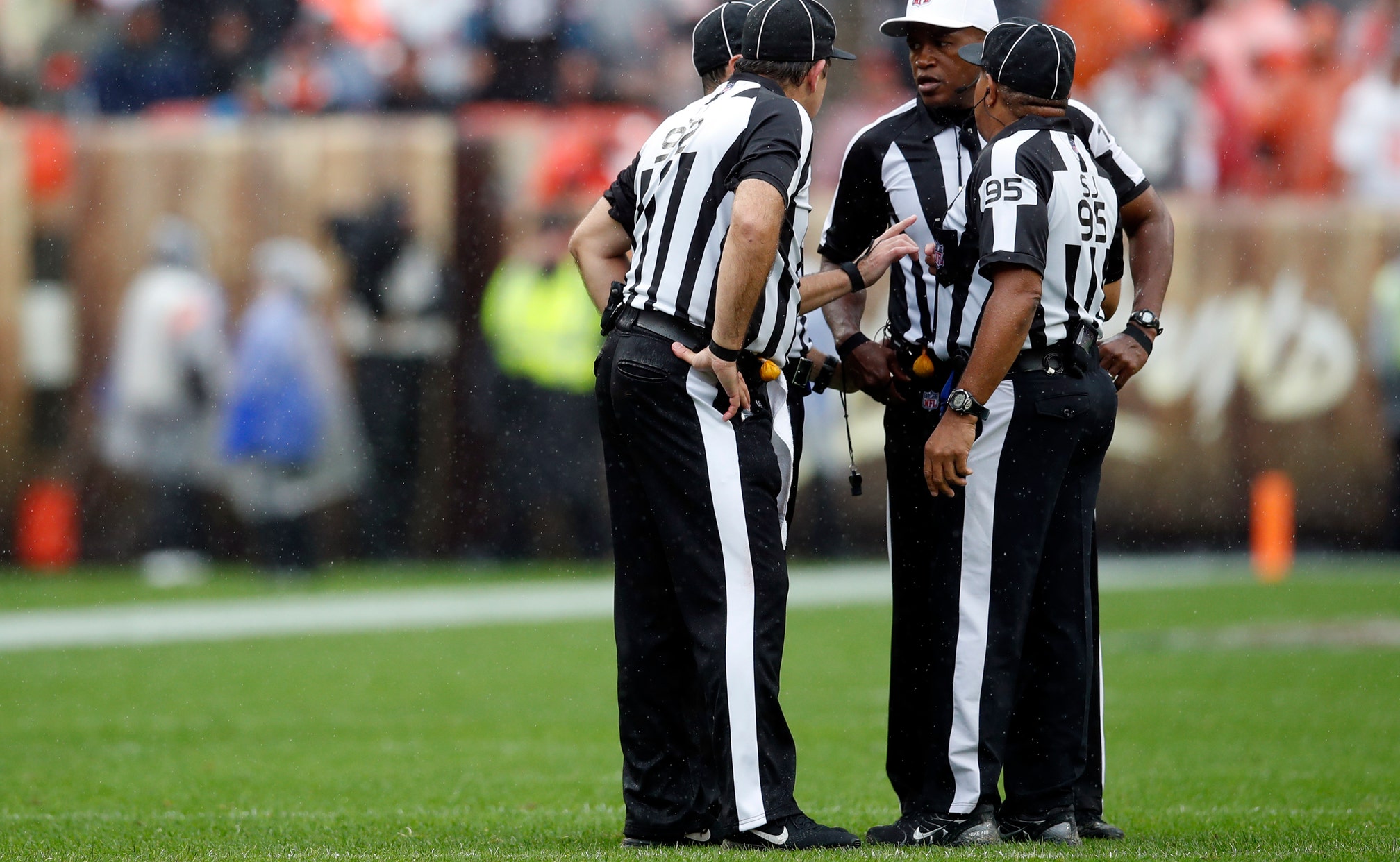 NEW YORK (AP) — One NFL fan is enraged by a penalty flag he sees fly on TV. He turns to the woman next to him and asks, "Where do they get these guys?"

Replay then proves the call was correct, and the fan just shrugs as the woman replies: "Guess they know what they are doing."

Those officials come from a pipeline established by the NFL that seeks to identify people with the right skill set, temperament and judgment to handle a thankless job week after week.

Often, the league puts a high premium on experience, even when some officials no longer seem to have the agility to keep up with the incredible speed of the game. Among current referees, Walt Coleman is in his 30th year as an NFL official, Walt Anderson has begun his 23rd and Tony Corrente is in his 24th. Overall, there are 19 officials in the 20th or more season of their NFL careers, and an additional 33 with at least 15 years on the job.

As explained by recently retired referee Gene Steratore, now with CBS as an analyst, "The officials learn from all the time they spend on the field about angles and getting the best view on a play."

He points to the new rule banning any hit initiated with the lowering of the head and use of the helmet, whether by a defender or offensive player. Noting it is a "necessary rule change to protect the safety of the players," Steratore understands there's an adjustment period for those players and the officials before reaching a full understanding of what should draw a flag.

"Sure there's a learning curve for them," he says, "but then a trigger will show right before that contact, and it will become clear if it is a penalty. I think that will come in a fast period of time."

It did. One such penalty was called in Week 1, on Kansas City safety Ron Parker.

The NFL, which has seven new officials this season, has a distinct pipeline for talent. It's not entirely unlike the flow for players in that many referees, umpires, linesman and judges come from the college ranks. But the in-depth process can begin well before the highest college levels.

"We look at officials at the high school level," says Al Riveron, the NFL's officiating director. "After a few years in high school, they might move to the lower college ranks and then to the Power Five conferences. We have a staff of 72 scouts and supervisors and our full-time officials who look at you. We first home in on their skills, and we are thinking long term if we have an interest in you. At some point, you could be ready (for the pros)."

To aid in the process, the league created the Officiating Development Program. Candidates must receive medical clearance, pass a background check, take a psychological assessment and complete an in-person interview with a panel of NFL staffers.

If they are accepted into the program, they study position-specific film with veteran NFL officials and current officiating supervisors. They get familiar with NFL rules that often are different from colleges. For example, clock stoppages to move the chains on first downs, or one foot in bounds on receptions.

Then the prospective officials attend an NFL preseason officiating clinic, participate in minicamps and training camps, and some work an NFL preseason game. They could get some experience in the Senior Bowl, East-West Shrine Game or NFLPA bowl game, as well.

When they are assessed for potential employment, the categories are:

—Ready for the highest level. The official gets a spot on an NFL crew when an opening comes.

—Great work, but room to improve. The league likes what it sees in the official but determines he or she is not quite ready for the NFL. That officials remains in the program.

—Not the right fit. The league does not see this official working in the NFL.

There are 39 officials in the program this year.

The NFL always is looking for outlets through which to develop game officials. The CFL and Arena League have been options, and they could have another when the Alliance of American Footballs starts up the week after the Super Bowl.

"We're keeping a big eye on the Alliance," Riveron says enthusiastically. "The more officials get to see live snaps, the greater that is."

Green Bay Pummels Chicago on SNF
The Packers routed the rival Bears in Week 12's finale, putting on a clinic on both sides of the ball.
4 hours ago

NFL's Top Plays Of Week 12
It's another wild Sunday in the NFL. Check out the best moments from across the league!
7 hours ago

Mahomes, Hill Torch Tampa Bay
Also, Denver has a nightmarish day at quarterback, and the Niners sweep the Rams for the second straight season.
7 hours ago

Henry Hammers Colts, Falcons Roast Raiders
Plus, the Patriots earn a gritty win over Arizona, the Bills outlast the Chargers, and the Vikings win in comeback fashion.
9 hours ago

Who's Playing QB For The Broncos?
All three Denver QBs missed Sunday due to COVID protocols. So ... meet Kendall Hinton.
10 hours ago
those were the latest stories
Want to see more?
View All Stories
Fox Sports™ and © 2020 Fox Media LLC and Fox Sports Interactive Media, LLC. All rights reserved. Use of this website (including any and all parts and components) constitutes your acceptance of these Terms of Use and Updated Privacy Policy. Advertising Choices. Do Not Sell my Personal Info