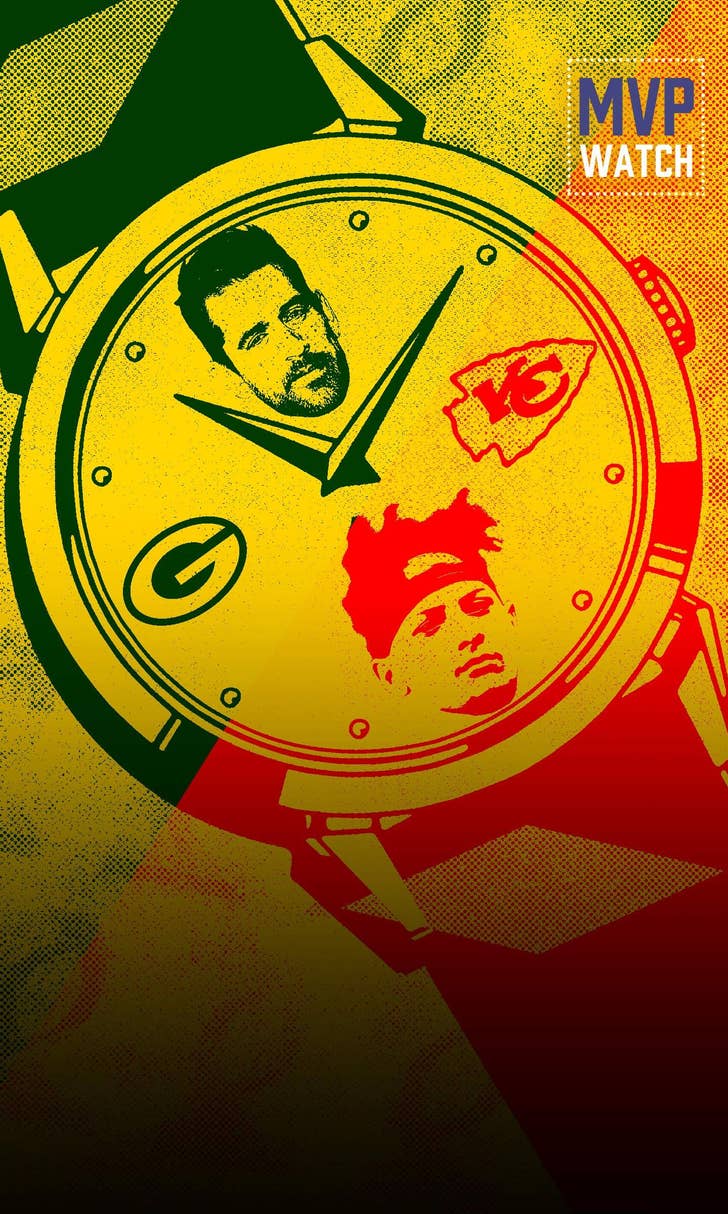 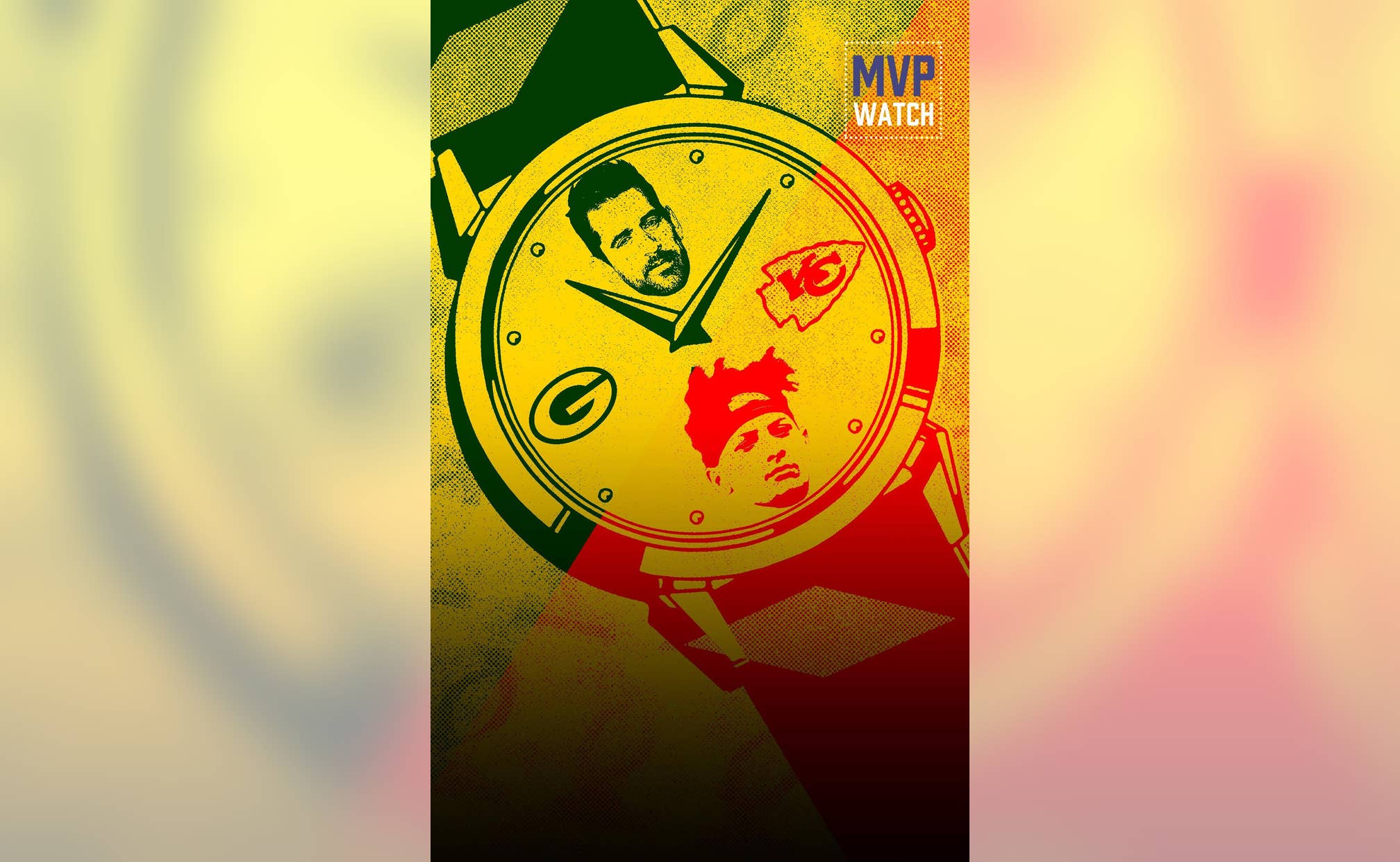 previous story
On The Outside Looking In
next story
All In On Allen?
National Football League

With one week remaining in the regular season, the NFL MVP race is essentially down to two contenders.

Aaron Rodgers and Patrick Mahomes have outpaced the field and will have one last opportunity to shine for the Green Bay Packers and Kansas City Chiefs, respectively, to try to add to their trophy cases.

Here are the MVP odds, according to FOX Bet's insights as of Tuesday morning, along with a breakdown of each candidate's recent play and what's on the horizon. 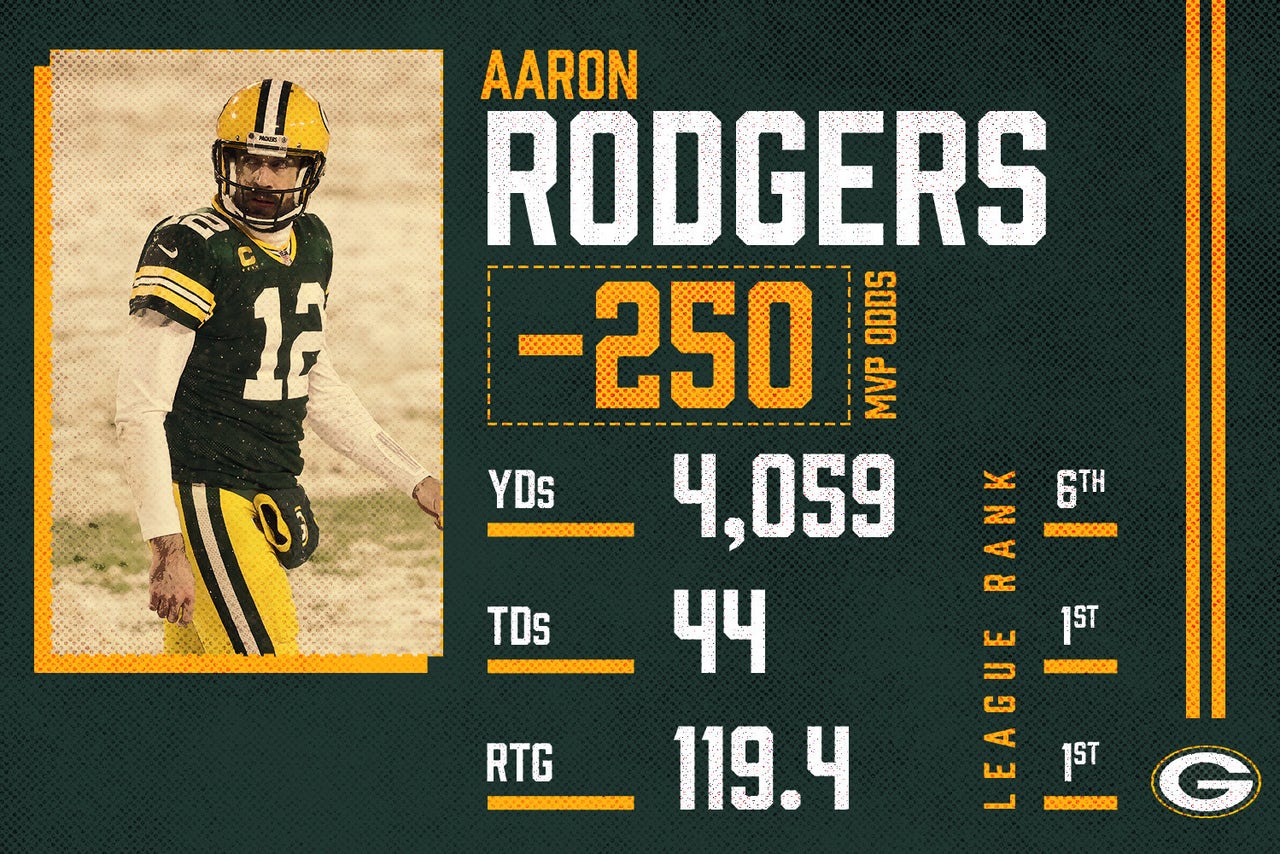 How it's going: An opportunistic Rodgers picked the ideal time to leapfrog Mahomes as the favorite to win the MVP award. This is Rodgers' first time leading the race since this feature began in mid-October, and the award looks like his to lose. Ever the consistent force for the Packers, Rodgers has only had one stinker of a game this season, a Week 6 loss to the Tampa Bay Buccaneers. Outside of that game, Rodgers has been sensational.

With two regular-season MVP trophies already in his name ⁠— 2011 and 2014 ⁠— the 37-year-old Rodgers has flourished in his second season under coach Matt LaFleur. He kept his outstanding season rolling with a Week 16 demolition of the Tennessee Titans, completing 84 percent of his 25 pass attempts for four touchdowns and 231 yards ⁠— while the snow fell at Lambeau Field. His one interception was the fifth he has thrown all season, the fewest of any QB to start every game this season.

What's up next: The 12-3 Packers still have plenty to play for in Week 17, as the NFC's No. 1 seed (and lone playoff bye) is up for grabs. Fortunately for Rodgers, a win against the Chicago Bears will lock that up. The Bears will also be geared up for the game, as their playoff lives hang in the balance. The last time these two NFC North rivals went head-to-head, Rodgers ripped off four TDs on 21 of 29 passing in a 41-25 victory.

What people are saying: "Aaron Rodgers is still the best quarterback in the National Football League ... Even in his down years, his last two years, he had 50 touchdowns with six interceptions combined." ⁠— Emmanuel Acho, Speak For Yourself 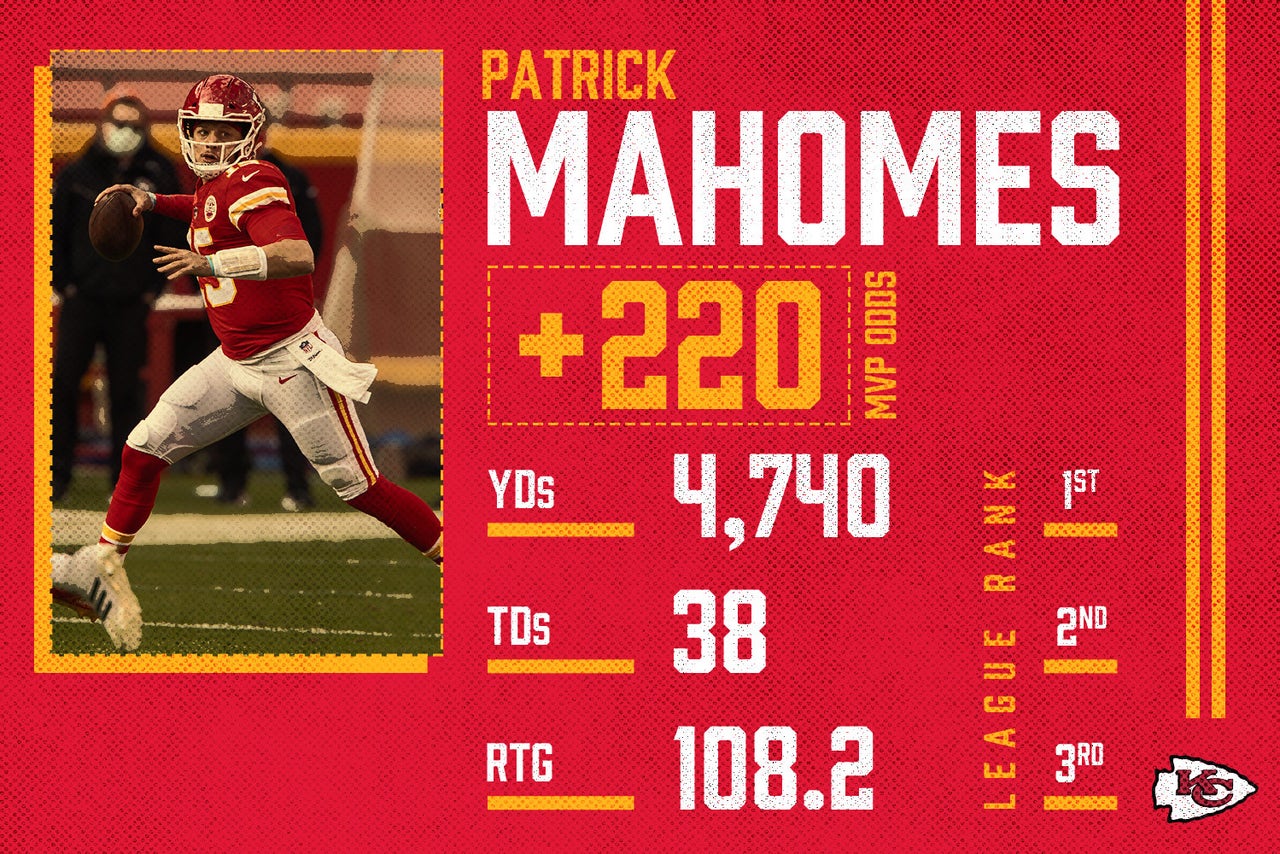 How it's going: By the standards set for Mahomes, he has been trending down since the calendar flipped to December. He's yet to crack the 100 mark in passer rating since Week 12, and his five turnovers in the past four weeks are nearly double the amount (three) he had in the first 12 weeks of the season. The Chiefs are still winning, though, and that's what matters when all is said and done.

Furthermore, it's not as though Mahomes has been playing poorly. He just has set a ridiculous benchmark after bursting onto the scene and winning the 2018 MVP award in his first season as a starter. Even as the Chiefs struggled last week against the Atlanta Falcons, it was Mahomes who found Demarcus Robinson for the go-ahead touchdown with less than two minutes remaining.

What's up next: The 14-1 Chiefs have the AFC's No. 1 seed locked up, so it's likely Mahomes' regular season has been written. The current MVP odds seem to reflect that he won't play against the Los Angeles Chargers on Sunday, giving him no shot to put on a showcase to supplant Rodgers. If Andy Reid does opt to rest his franchise quarterback, Mahomes will end the season with 4,740 yards, 38 touchdowns and six picks ⁠— and potentially a second-place finish in the MVP vote.

What people are saying: "It just feels like everybody's kinda talking themselves into Rodgers, more because they're either bored by Mahomes and the Chiefs, or disappointed. And those don't feel like good reasons to me." ⁠— Bill Simmons, The Ringer 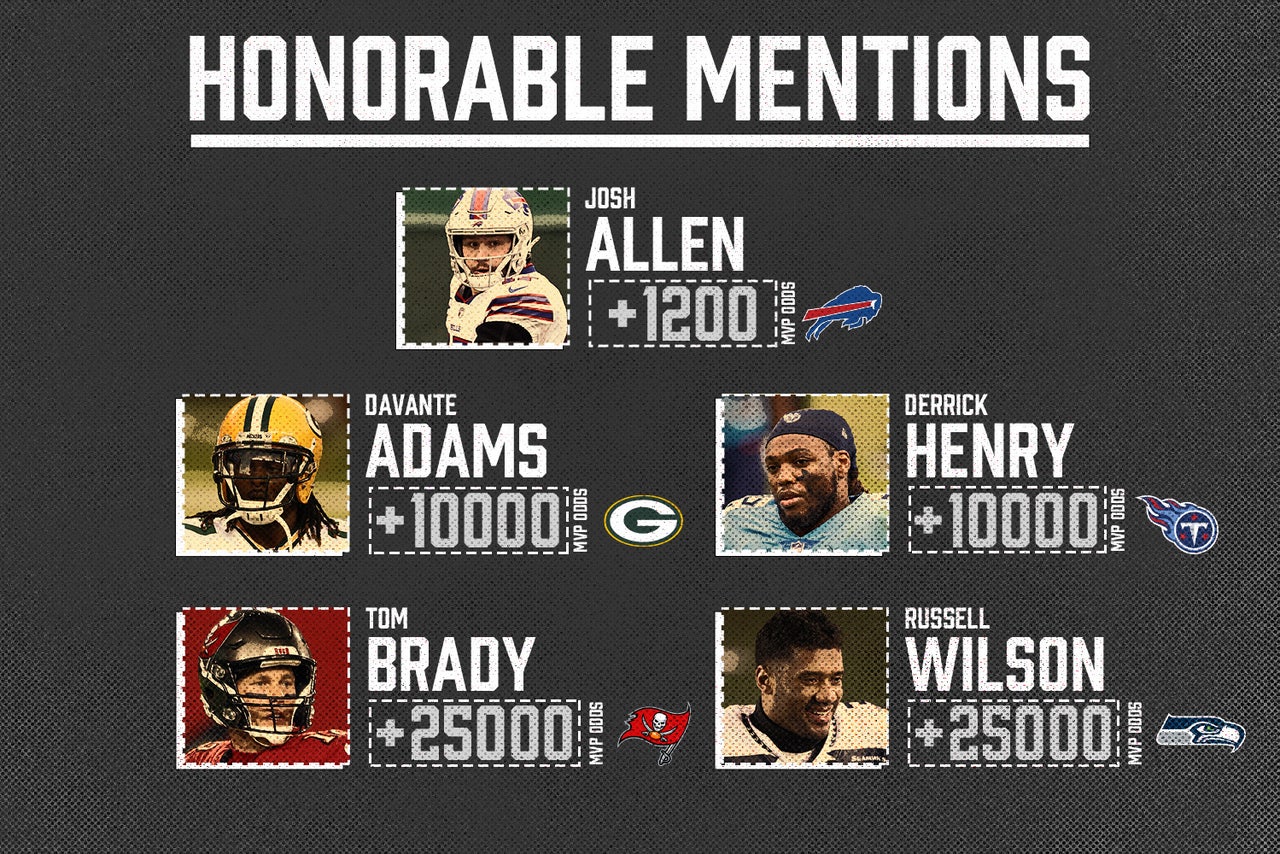 Tom vs. Time: The Ultimate Mismatch
At age 43, Tom Brady continues to defy the doubters, upending conventional logic and, yes, hunting yet another Super Bowl.
4 hours ago

Lifting Their Voices
On Martin Luther King Jr. Day, Bubba Wallace and other athletes reflected on using their platforms for social justice.
6 hours ago

Going For Glory (And The Win)
Mahomes was out. But that didn't stop Andy Reid from laying it all on the line with Chad Henne, Charlotte Wilder writes.
8 hours ago

Who's to Credit?
Do the Bucs deserve praise, or is Drew Brees to blame for Tampa Bay's victory over New Orleans? The reactions are split.
9 hours ago

Sports World Honors Dr. King
Dr. Martin Luther King Jr. was a pioneer unlike any other, and the sports world is spending Monday celebrating his legacy.
13 hours ago
those were the latest stories
Want to see more?
View All Stories
Fox Sports™ and © 2021 Fox Media LLC and Fox Sports Interactive Media, LLC. All rights reserved. Use of this website (including any and all parts and components) constitutes your acceptance of these Terms of Use and Updated Privacy Policy. Advertising Choices. Do Not Sell my Personal Info