SAN JOSE, Calif. -- Jared Allen received a text from Brad Childress after Ron Rivera ruled out Allen for the NFC Championship Game, despite the veteran defensive end's protesting and claiming he could play through a broken foot.

"Ron made the right move by keeping you out," Allen recalls Childress, his head coach from his time with the Minnesota Vikings, texting him.

"Yeah, me and you might have had a closed-door meeting on this one," Allen said he replied.

An energetic, vocal guy who admittedly doesn't "pull punches" with anyone, Allen emphatically stated his case and tried to change Rivera's mind by practicing in the days before the Panthers were to face the Cardinals. But in the end, Rivera held firm and ruled Allen out of the game that would decide whether the Los Gatos, Calif., native would play in his first Super Bowl, let alone one less than a half-hour drive from where he grew up. Had Carolina lost, Allen wouldn't have been sitting on a riser on Tuesday, telling the media stories about plays he made in high school and even Pop Warner, such as the 62-yard touchdown he had as a young running back.

"No big deal," he said with a wry smile.

Minutes after telling those stories, Allen praised Rivera for making the right decision that worked out well when the Panthers blasted the Cardinals. Allen said he's a go for Sunday against the Broncos and isn't even feeling any pain in his foot right now. He was wearing cowboy boots, not a walking boot. He's ready to "rock and roll."

But at the time Rivera made his decision, Allen wasn't happy. He expressed his opinions to Rivera, though it apparently remained civil, thanks to Allen's respect for the former Bears linebacker.

"I think that's what's so great about him. He allows those conversations to happen," said Allen, who was traded from the Bears to the Panthers in September, in large part because he saw an opportunity to make a postseason run with Carolina. "'Here's what's going on.' 'OK, here's what I think.' He listens. It doesn't always mean he's going to do everything the player wants, but he's going to listen, which I respect. Yeah, I was pissed off for a day and then you move on. It's not about me. 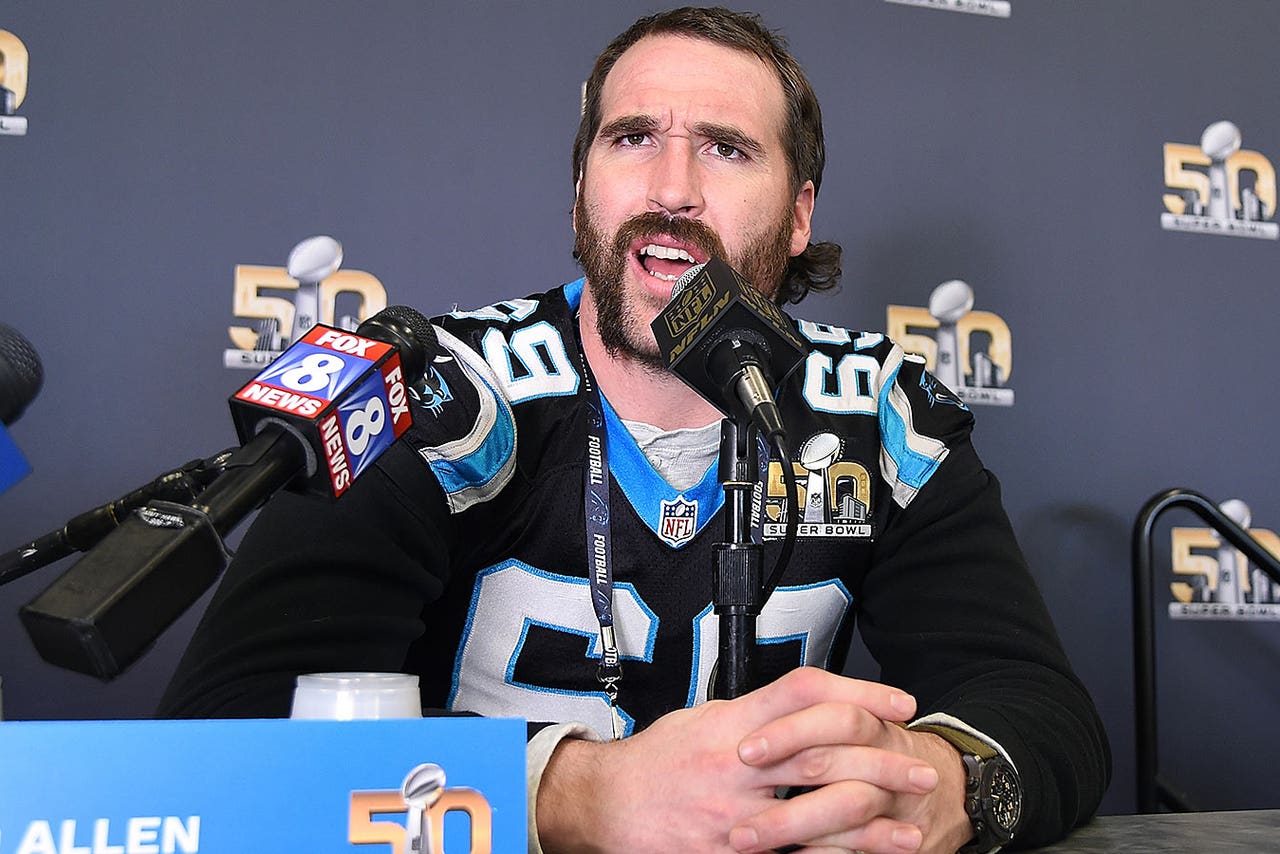 "If he would've just told me, 'I guarantee we're going to win, maybe it would've made it easier.' But that's why I like him so much. It's hard to describe. There's just something about Coach Rivera. He's cool, calm and collected. He gets it."

Rivera said the extra week off has helped Allen, who practiced well on Monday. Allen still has to make it through the week but all signs are positive for him right now.

Allen credited the team's training staff as well as his "buddy (Jay) Glazer," who hooked him up with some of the latest laser therapy via a company called Phoenix Thera-Lase. Glazer was skeptical of the healing power of lasers until actor and former NFL player Fred Dryer introduced him to the company.

"It's the biggest game-changer I've ever seen," Glazer said. "We've taken away high-ankle sprains in six days. We had (UFC champ) Rashad Evans, coming off a double ACL, ditch his knee brace four days after treatment. It was the first time in 20 months he was able to do that."

Glazer arranged for the company to send one of the $135,000 lasers to Carolina so Allen could undergo treatment to remove the inflammation surrounding the broken bone. That's why Allen was able to run within a few days and believed he was ready to play.

"I was with him on the sideline (before the NFC Championship). He was doing drills," Glazer said. "(The Panthers) just looked at it like there was no way he could play on it that quickly."

But they had no doubt he'd be ready for the Super Bowl.

"You could tell it bugged him because he was real quiet and Jared's not a quiet guy," said defensive tackle Star Lotulelei, who had a similar injury last year that required surgery. "So when he's quiet, you know something's wrong. He's a tough old man."

After the win over Arizona, Allen walked right into the locker room and immediately began telling his teammates he'd be ready for the Broncos. On Tuesday, he barely entertained a question from a reporter who even suggested there was a chance he'd sit out.

It's all worked for Allen so far, courtesy of the long view his coach took and the patience Allen showed in return.

"When you're at different points in your career and stuff like that..." Allen said, pausing after he trailed off before continuing his thought with a grin. "Yeah, in my younger days, the conversations might have gone a little different."