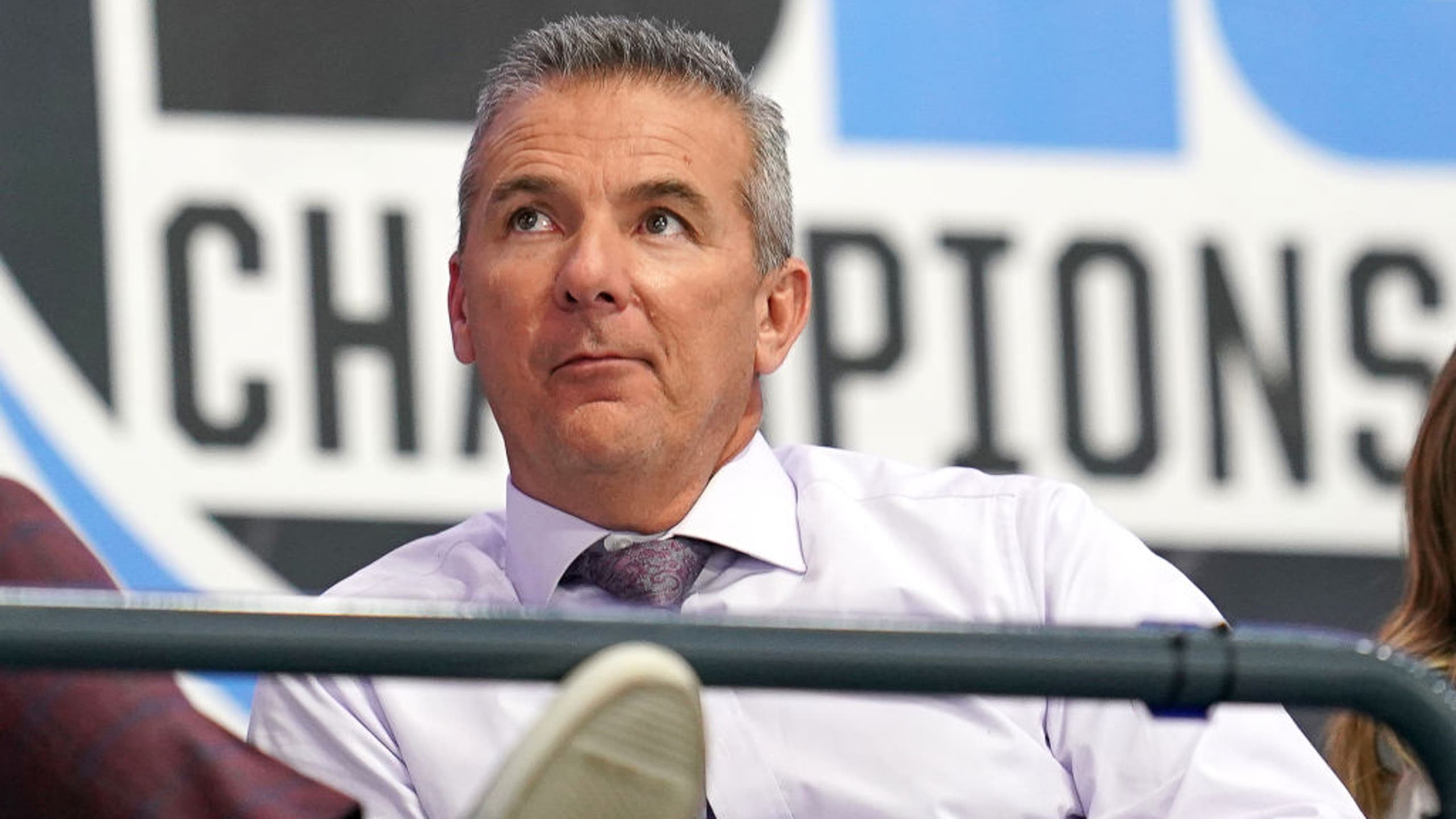 Urban Meyer has accepted the head-coaching job of the Jacksonville Jaguars, and he will now test himself at the sport’s highest level.

The NFL is the destination where Meyer can prove the professional belief he holds most dear: True leadership makes champions.

The new Jaguars coach defined his philosophy of leadership by a principle he called "above the line," his belief that winning behavior is purposeful and about intention, while "below the line" actions are impulsive and resistant.

During his career, Meyer has developed a veritable curriculum that teaches leadership as a skill and as a system. As head coach at Ohio State, he put on workshops, gave quizzes, implemented exercises and fostered deep discussion among his players and staff to drive home his ideas about leading.

As a young man, he was taught to want the game in his hands and learn to be disciplined — or else. 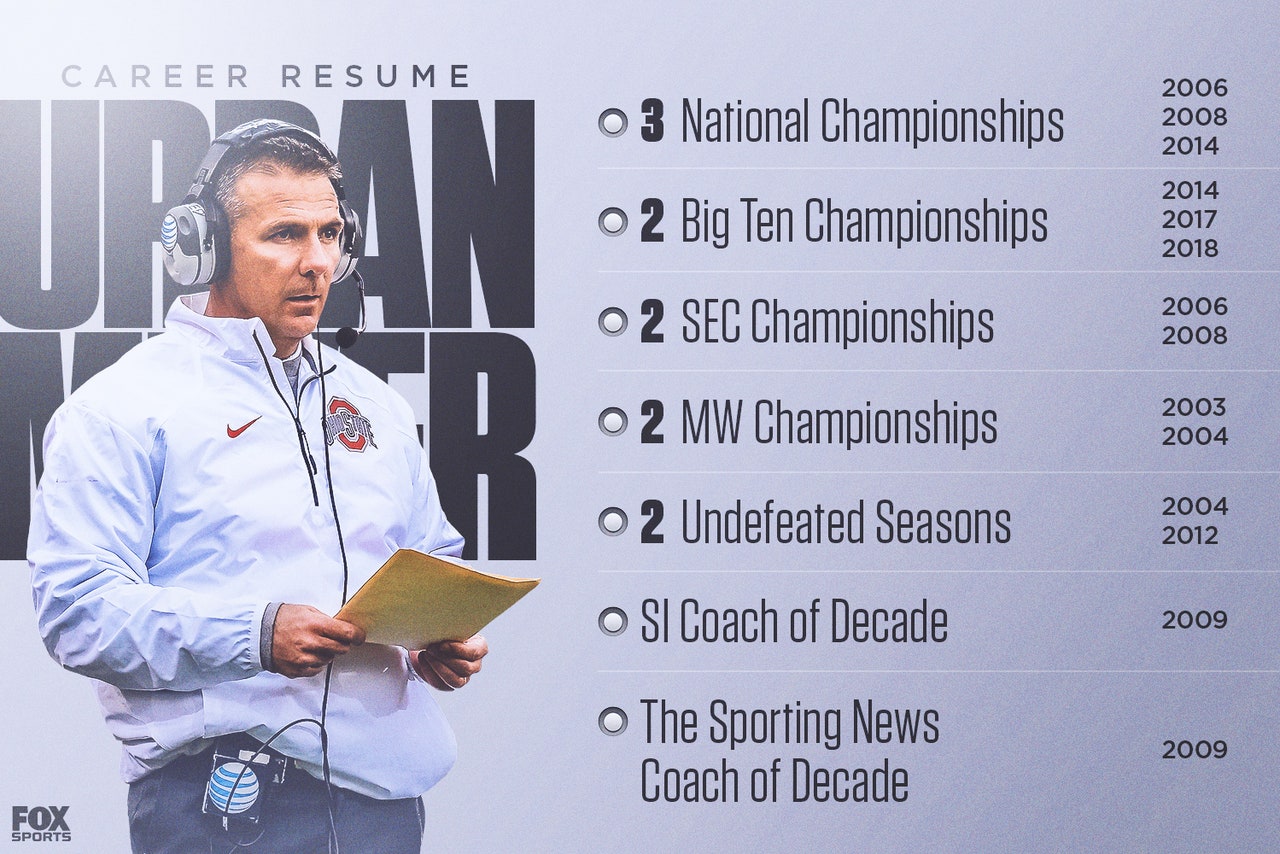 In May 1982, Meyer was a decent MLB prospect when the Atlanta Braves dangled a $13,000 signing bonus in front of him. But when he left the bat on his shoulder for a called strike three with the winning run on base for his St. John Heralds in a one-run game against rival Harbor High, his father, Bud, made him run the eight miles home following the game "as punishment for coming up small."

When Urban was in third grade, his teacher, Mrs. Stofko, told Bud that his son was cutting up too much in class.

"Paddle him," Bud said, according to Meyer's book. "Use a ruler. Punish him any way you want."

Meyer has proven four times that he can lead as a college coach. He has turned programs into contenders (Bowling Green), winners (Utah) and national champions (Florida and Ohio State).

There’s no question that Meyer, most recently an analyst on FOX’s Big Noon Kickoff, could’ve coached in college again had he wanted the opportunity. USC was a likely destination for him if that job came open, and he reportedly turned down multiple offers from Texas.

But the NFL held his interest, and the job in Jacksonville is a definite fixer-upper. The Jags have lost at least 10 games in nine of their past 10 seasons, and they have made the playoffs just three times since 2005.

The Jacksonville job is not unlike Meyer's first head-coaching gig. In 2001, he was mulling taking the job at Bowling Green while working as an assistant at Notre Dame. The Falcons had gone 2-9 the season before.

Meyer called one of his mentors and the man who hired him at Notre Dame, Lou Holtz.

"Coach, I don't know what I should do. This isn't a very good job," Meyer said.

"Of course it’s not a good job," Holtz said. "If it was a good job, they certainly wouldn't be talking to you."

Questions remain about how effective Meyer can be in the NFL, but those questions are secondary to concerns about his health. Meyer had surgery in 2014 for a congenital arachnoid cyst in his brain. He lost 37 pounds toward the end of his run at Florida. During his last season in Columbus, Ohio, his physical exhaustion was evident.

After a loss in the 2009 SEC Championship game, Meyer’s wife found him lying on the floor of their home and called 911. Meyer had experienced chest pains early that evening. He was treated at a hospital in Gainesville, Florida.

Three weeks after the SEC title game, he took a brief leave of absence before returning to coach the 2010 season.

The season ended with him earning his 100th win in the sport. He was the sixth-fastest coach to accomplish the feat, needing just 118 games in 10 seasons. But after going 7-5 that year, Meyer announced his retirement.

That retirement lasted only one season, as Meyer returned to coach Ohio State from 2012 to 2018, winning another national title in Columbus in 2014.

Now, Meyer moves to the NFL while coming off a second stint of multiple years outside of coaching. He will try to do what only Pete Carroll, Jimmy Johnson and Barry Switzer have done in football history: win the Super Bowl after winning a national title in college.

Meyer will try to succeed where national-title-winning coaches such as Nick Saban and Steve Spurrier have failed. He joins the fray alongside Carolina Panthers coach Matt Rhule and Arizona Cardinals coach Kliff Kingsbury, learning how difficult the transition from 85 scholarship players to 53 rostered men can be. He also faces the challenge of the salary cap.

College football coaches are notorious for micromanaging. Couple that with the roster management that comes with a defined budget, and there are challenges ahead for Meyer in Jacksonville.

"He is very demanding and pushes hard," Meyer’s friend, Tim Knight, said. "His standards are clear, and he expects that coaches and players perform to those standards. He will get in your face very fast if you are not doing your job."

"Like, Urban Meyer is a control freak, right?" an industry source told FOX Sports. "He makes every decision all day long with everything to do with that program. That can't happen in the NFL. You have to trust somebody else to evaluate and to make some of those decisions."

The general manager job is open in Jacksonville, as Dave Caldwell was fired in 2020, and the new GM will be most important to Meyer off the field in implementing his culture throughout the franchise.

The offense Meyer chooses to run and the defensive coordinator he chooses to hire will be indicative of the kind of personnel he’ll acquire through the NFL draft and free agency. What’s clear is that he won’t be able to just insert his favored spread offense in a league in which only the top 2 percent of college football players play.

Employing a defensive scheme that acts as a complement to the offense will be paramount to any success Meyer’s Jaguars enjoy. The NFL allows fewer drives and plays per game, raising the value of each possession.

The most plays per game in 2020 were run by the Los Angeles Chargers (70.5). Arguably the most explosive team in the NFL, Kansas City, ran just 67.1 plays per game. In his last season as a coach, Meyer’s Ohio State Buckeyes ran 75.1 plays per game — good enough for 37th in the country.

The Jags possess the No. 1 overall pick in April’s draft, and it’s widely believed that they will draft a quarterback. Most NFL draft analysts believe that the first player off the board will be Clemson quarterback Trevor Lawrence.

However, like most teams that finish dead last in the NFL, Jacksonville has more than one need. Pairing a rookie quarterback with a rookie pass-catching threat would be smart, especially with so many good receiver prospects available in the upcoming draft.

Kyle Pitts, the 2020 Mackey Award winner, and Ja’Marr Chase, the 2019 Biletnikoff winner, could each be available at the top of the second round. But acquiring talent through the draft is not only a difficult and arduous way to build a winning roster. It's also not necessarily meant for a career college football coach’s skill set.

The NFL is a socialist endeavor in which the best teams are penalized with lower draft positions and tougher schedules than the worst teams.

"In the NFL, you only get one first-round draft pick," Saban said in Saban: The Making of a Coach, "and that's if it hadn't already been traded away. You couldn't really outwork anybody. In college, I could recruit 10 players with first-round talent every year."

That’s the way Meyer built every one of his national championship teams and how he became the third coach in the history of college football to win national titles at two schools.

He’ll need to employ ingenuity and rely heavily on his presence as a motivating force in a locker room, where he won’t be the highest-paid person in the room and can’t hold an annual scholarship renewal over players' heads.

"The defining characteristic of every championship team is leadership," Meyer wrote. "Leadership isn't a difference-maker – it is the difference-maker. Talent will get you seven or eight wins [in college]. Discipline pushes it to nine wins, maybe. But when you add leadership, that’s when the magic happens."