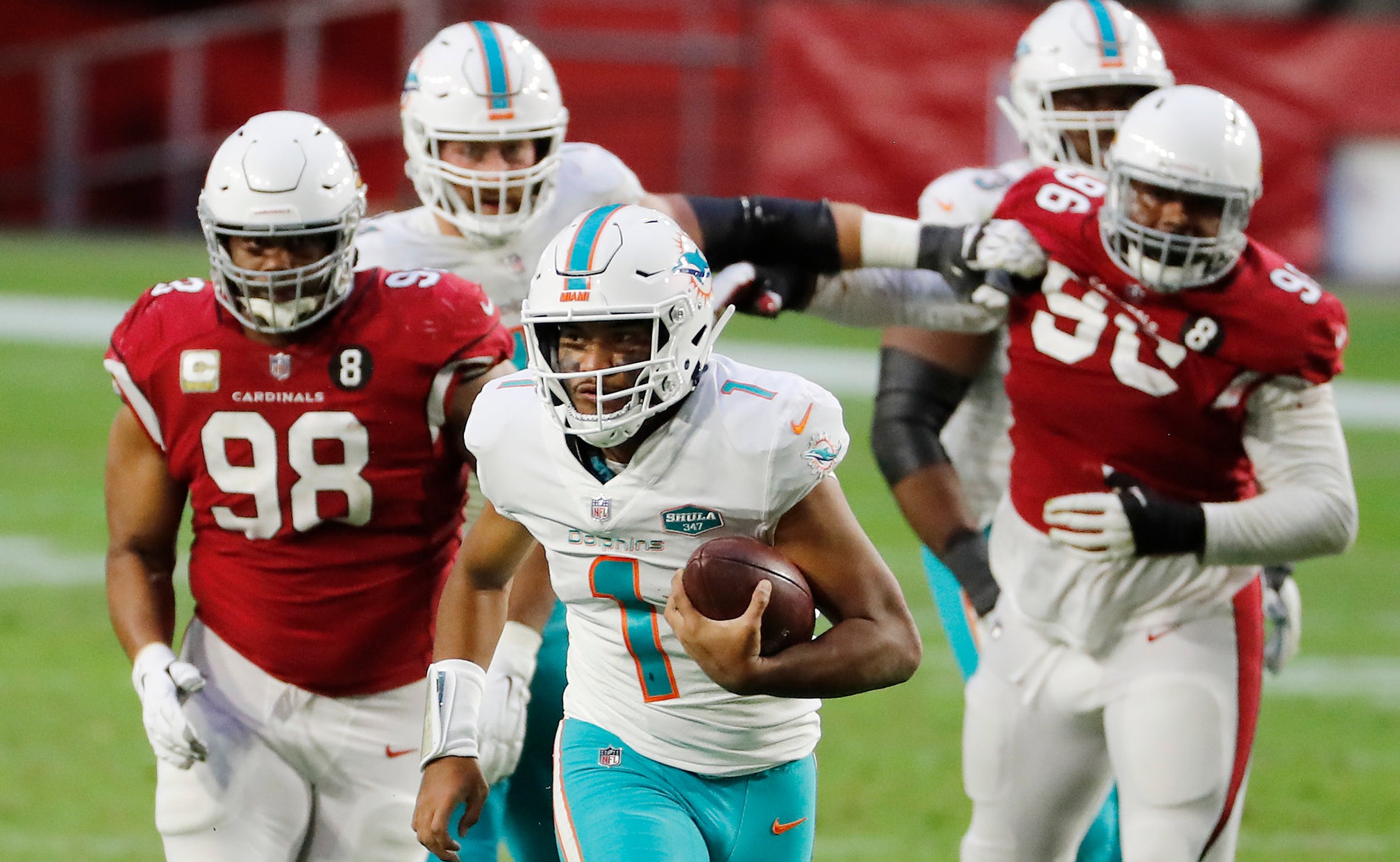 The three worst teams in football – the Jets, Cowboys and Jaguars – all covered, and they did so with a backup QB, a practice-squad QB, and a sixth-round rookie QB making his NFL debut. But I preach this weekly: Nobody is as good or bad as they were last week. Try to remove the emotion from gambling.

Take the Bucs. They laid one of the biggest eggs in national TV memory, losing by 35 points at home as a favorite. Just 24 hours before that, sports fans were prattling on about Tom Brady as an MVP candidate, and the Bucs being Super Bowl favorites in the NFC. Should all of that change because of one 60-minute outcome? If so, we’ve got to judge everyone differently, and yes, even the dregs of the league using backup QBs.

Enter the NFL Challenge contest on the FOX Super 6 app for free and you can win this week's $1,000,000 jackpot! Download now at foxsuper6.com. Also, join Jason McIntyre and Geoff Schwartz at noon ET every NFL Sunday for "Talk the Line: Q&A Edition," as they run through all the last-minute NFL updates and line movements.

NARRATIVE GAME OF THE WEEK

Los Angeles Chargers at Miami Dolphins:
The Dolphins are the luckiest team in the NFL! They got a defensive TD at Arizona, defensive and special teams scores against the Rams, beat backup QB Joe Flacco, and took advantage of a 49ers team decimated by injuries.

And now Miami is down two defensive starters in its front seven due to COVID-19, and also missing WR Preston Williams, who leads the team with four TDs and is sidelined with a foot injury.

When you combine Miami’s luck and injuries with the Chargers' lack of luck – they’ve lost six games by a total of 24 points! – that’s got to flip, right? Except that’s not how it works.

The Chargers' running game is down to free-agent RB Kalen Ballage, unless undrafted free agent/bowling ball Troymaine Pope is back from his concussion. Coach Anthony Lynn has punted on fourth-and-1 five times in the last eight games. Meanwhile, Miami coach Brian Flores is 15-5 ATS in his last 20 games after a rough start in South Florida. Pick: Miami -1.

Buffalo Bills at Arizona Cardinals:
You saw Miami's Tagovailoa move the ball fairly easily against the Cardinals (312 yards, 5.6 yard per pass) and you assume Allen will do the same after throwing for 415 yards against Seattle. But what you didn’t see is Arizona was without its second-best cornerback (Byron Murphy) and its best edge rusher (Devon Kennard). Both are back off the COVID-19 list, and Murphy will be instrumental containing Stefon Diggs in the slot.

Buffalo has thrown the ball on early downs 94 percent of the time in the first half, the most of anyone this season. However, Arizona’s defense will be the healthiest it has been this season.

Expect a big game from DeAndre Hopkins, who for just the second time in his career wasn’t targeted in the entire first half against Miami, with Xavien Howard shadowing him. Buffalo’s good, but its inflated record was built on early-season wins against teams they caught at the right time – Miami (with Ryan Fitzpatrick at QB), the Rams (in a brutal travel spot) and the Raiders (the week COVID hit Las Vegas hard). Pick: Arizona -1.5.

Minnesota Vikings at Chicago Bears:
Every week, there’s a massive overreaction line move to the previous week’s games. The Vikings are this week’s team. Based off Dalvin Cook running all over Green Bay and then Detroit, the Vikings moved from being two-point underdogs in Chicago to being two-point favorites.

Everyone wants to take the Vikings on the road. The Bears, losers of three straight, can seemingly do noting right offensively. Be careful. This is a classic Kirk Cousins letdown spot. He’s 0-9 in his career on Monday Night Football, and in his last three meetings with the Bears, they’ve sacked him 12 times.

Chicago has injury concerns, with RB David Montgomery’s status up in the air, and two other players' status (TE Cole Kmet and LT Jason Spriggs) unknown. Remember, it’s best to play the numbers, not teams or players. If you can get a full field goal, you definitely take it. Divisional underdogs are 29-15 ATS heading into Week 10, including 15-4 in the last three weeks. Bears +2.5.

I LOVE TO HAVE SKIN IN THE GAME, BUT I’M GOOD JUST WATCHING THIS ONE

Seattle Seahawks at Los Angeles Rams:
The boxing cliche “styles make fights” applies here because everyone knows how to beat Jared Goff: Pressure him. Of QBs who have started five or more games this season, Goff is second to last in completion percentage under pressure (38.9 percent) and has four interceptions.

But can Seattle generate pressure? No. They have to blitz (sixth in the league in blitzes), which worked against Josh Allen last week ... kind of. The Seahawks sacked him seven times, but Allen was accurate under duress and threw for 415 yards and three TDs. Allen completed passes of 20+ yards to seven different receivers.

The Rams excel in the short passing game and aren’t likely to play chuck and duck like the Bills. The Rams defense is eighth in efficiency, but that’s facing the weakest schedule of opposing offenses in the NFL. They swept the NFC East, beat the Bears, and contained Tua Tagovailoa in his debut.

My favorite Aaron Donald stat: No defensive player has faced more double teams than Donald (171) and he’s still leading the NFL in hurries (31) and tied for first in sacks (9). Someone wins a close game, with the Rams 31st-rated special teams perhaps biting them in the end. No pick.

IT’S US AGAINST THE WORLD. AND BY THE WORLD, I MEAN EVERY SPORTS BOOK IN AMERICA

Baltimore Ravens at New England Patriots:
Warning: This might be the most public NFL side of the 2020 season. Every sports book in the country is going to need the Patriots, because nobody is betting on New England.

The Pats needed 13 points in the final seven minutes to beat the winless Jets, and the last two times they played at home against top 15 defenses, they were shut down in a loss to Denver, and punchless in a blowout loss to San Francisco. The sooner everyone realizes these Patriots aren’t remotely close to Tom Brady’s Patriots, the better.

The defensive drop off has been stunning. Last year, the Patriots were ranked first in defensive efficiency. This season? The Patriots have fallen to 31st. They are 31st against the run, too. The Ravens, who didn’t have a rushing play of 10 yards or more in the victory over the Colts – aren’t the same offensively.  Last season, they were first; this year they’re 23rd. Still, Lamar Jackson should be able to get the struggling attack on track on the road. Pick: Ravens -7.

Houston Texans at Cleveland Browns:
Everything here sets up for the Browns. They’re healthy off a bye, getting RB Nick Chubb back, as well as guard Wyatt Teller (No. 1 ranked at his position, according to Pro Football Focus). The Texans are 28th stopping the run, and with winds of 20-plus mph expected in Cleveland, the Texans might have trouble moving the football.

Houston has been as terrible as expected; 2-0 against Jacksonville, 0-6 against everyone else. I’m not sure why this line is only three, and there’s no way I’m taking the Browns at -3.5. After all, these are still the Browns, who you might remember missed an extra point against Cincinnati, failing to cover at -3.5. No pick.

Because this was a busy week with the Masters and the upcoming NBA Draft, I wasn’t able to do the Tuesday teaser column. But, of course, I have a 6.5-point teaser play.

Take the Steelers down to -1 against the Bengals, a team they’ve beaten 10 straight times. The Bengals are healthy, and the Steelers looked exhausted last week in Dallas to close out a long three-game road trip. We saw Joe Burrow against a top-five defense earlier this season, and he was sacked seven times in a 27-3 loss.

Take the Bucs down to +1/2 points. Take Baltimore down to -1/2. Even if Bill Belichick coaches the game of the season, the Patriots don’t have the offensive firepower – or defensive talent – to hang with Baltimore. And to close out the teaser, push New Orleans down to -2.5 at home against the 49ers. That game scares me the most because the Saints are off a rout of the Bucs, and a letdown can be expected against a beat-up 49ers team that is 4-5 and has the toughest remaining schedule in the NFL.

Enter the NFL Challenge contest on the FOX Super 6 app for free and you can win this week's $1,000,000 jackpot! Download now at foxsuper6.com.