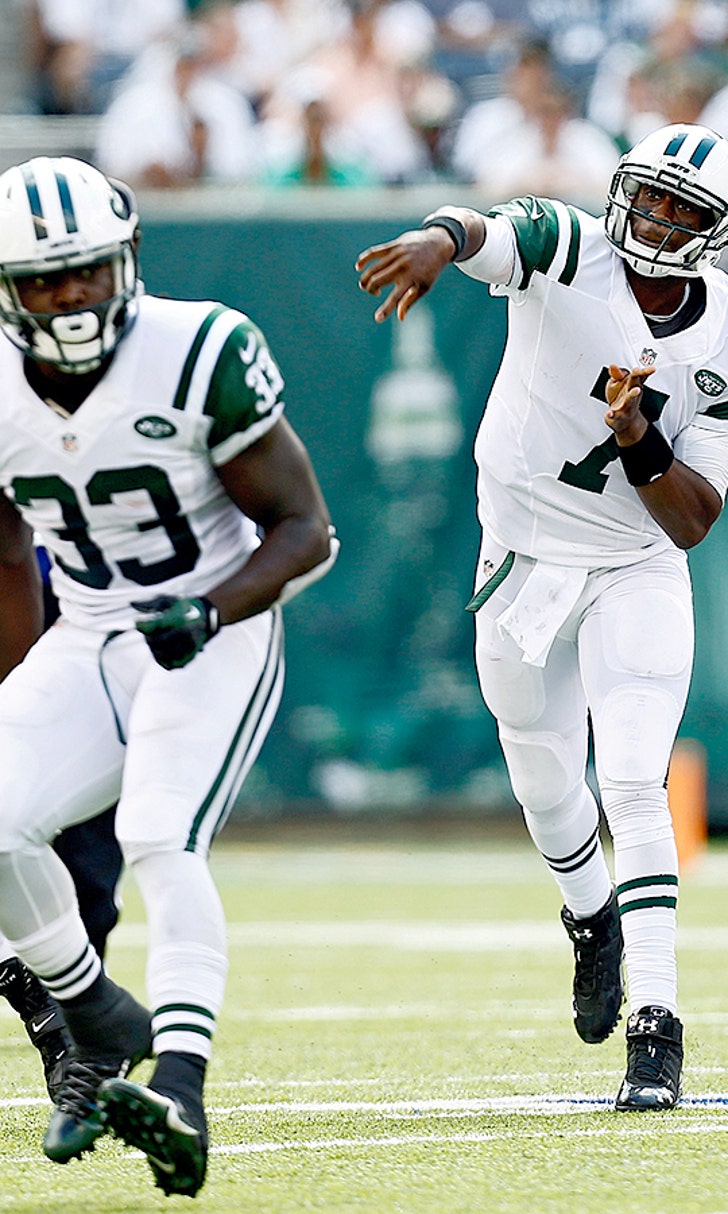 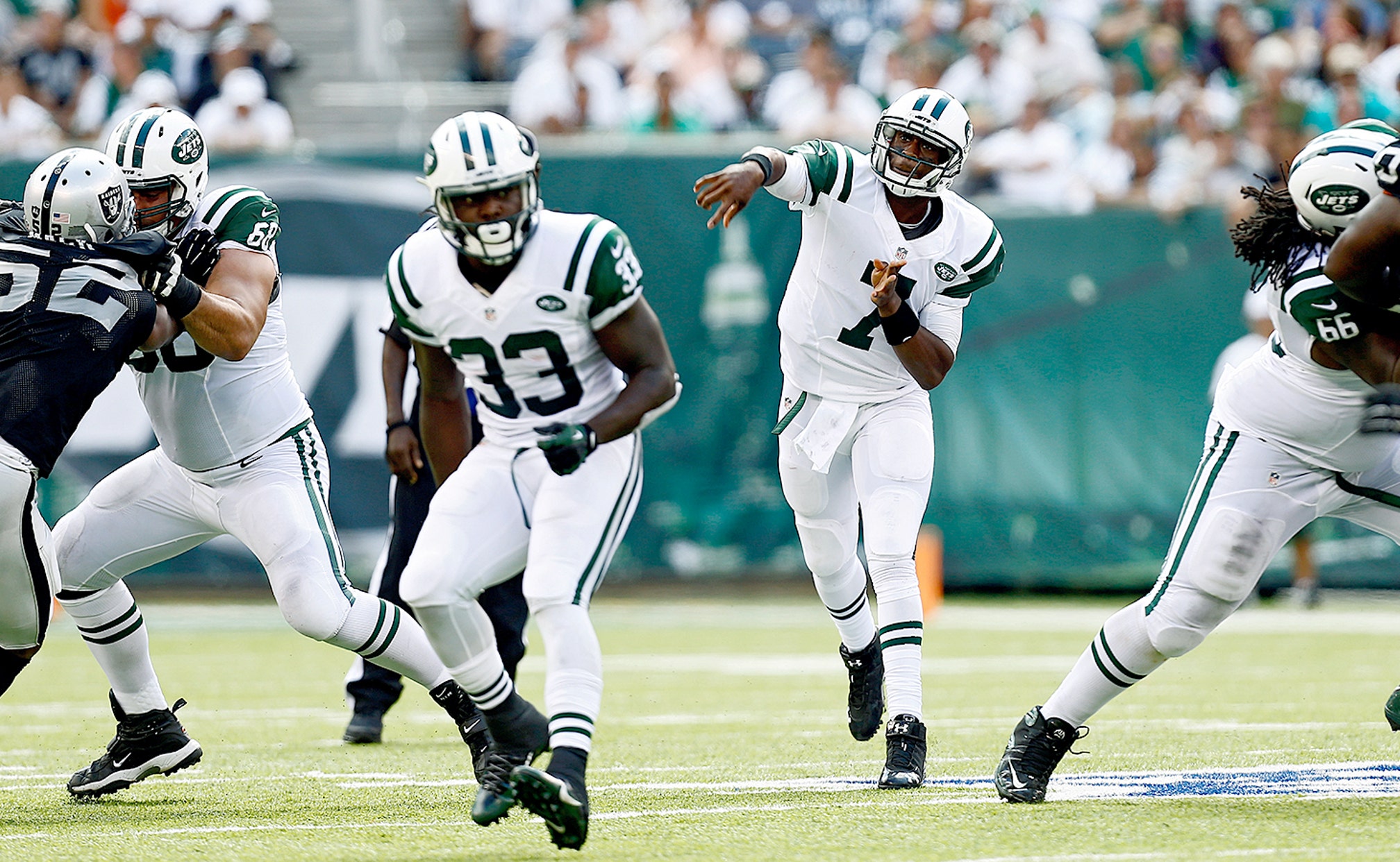 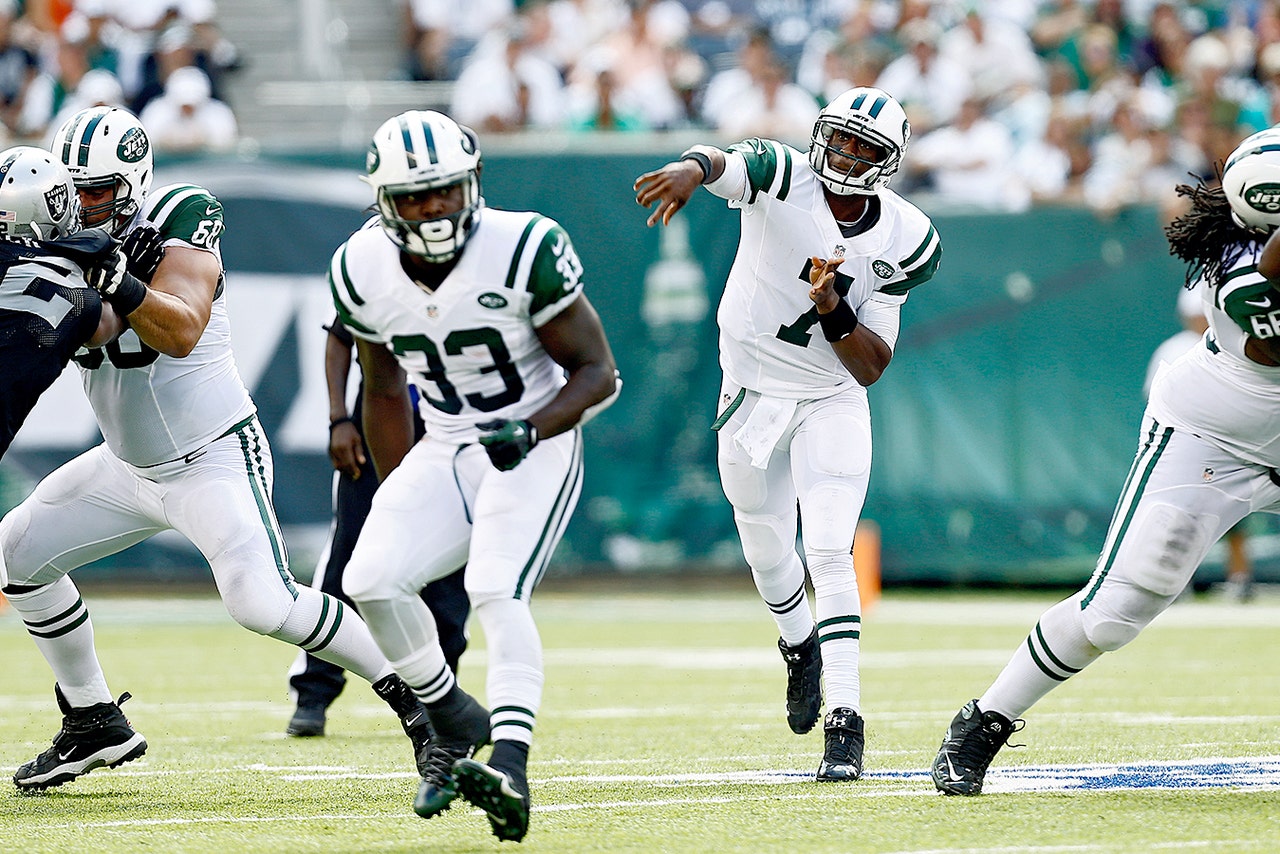 That's why the coach was far from thrilled after a 19-14 season-opening victory over the Oakland Raiders on Sunday.

Chris Ivory had a 71-yard touchdown run midway through the fourth quarter, and the Jets' swarming defense mostly clamped down on Oakland rookie quarterback Derek Carr as New York held the Raiders to 158 total yards and overcame a sloppy, penalty-filled performance to win.

"Our fans were better than our team today," Ryan said, bemoaning the Jets' 11 penalties for 105 yards.

"We never had any takeaways and had two turnovers, so that's obviously a work in progress. It has to get better for us to do what we want to do."

With the game still in the balance, Ivory rushed up the middle and appeared stopped. He slipped a few would-be tacklers and took off into the end zone. A pass on a 2-point conversion failed.

Carr, the Raiders' second-round draft pick, made it close with a 30-yard touchdown toss to James Jones, who made a leaping grab over Darrin Walls with 1:21 left.

The Raiders tried an onside kick, but Greg Salas recovered to seal it for the Jets.

Geno Smith was shaky early with an interception and lost fumble. But he threw a 5-yard touchdown pass to Chris Johnson as the Jets sent the Raiders to their 14th straight loss in the Eastern time zone. Smith finished 23 of 28 for 221 yards.

"We've got high expectations," Smith said. "We can't shoot ourselves in the foot and we can't make excuses for it."

Ivory finished with 102 yards on 10 carries, while Johnson had 68 yards rushing in his Jets debut and caught five passes for 23 yards.

The Jets were fired up by comments made by former right tackle Austin Howard, saying the Raiders would push around his ex-teammates.

"They certainly did that, to the tune of 25 yards rushing," Ryan said sarcastically. "And they gave up (212) rushing."

Carr, who got the nod over Matt Schaub, held his own in the first half, but the Jets pressured him throughout the final two quarters. He finished 20 of 32 for 151 yards, with touchdowns to Jones and Rod Streater.

"I don't think the game was too big for him," Raiders coach Dennis Allen said. "Overall, I saw some positive signs, some things that he did well. Obviously, I saw some mistakes."

With the Jets leading 10-7, the defense came out roaring to start the second half, holding the Raiders to minus-3 yards in the third quarter.

Carr had a short field to work with after Charles Woodson intercepted Smith. He got his first NFL touchdown on a screen to Streater, who scored from 12 yards to give the Raiders a 7-3 lead.

Smith turned it over again on the next possession, killing a long drive, when he fumbled -- with Michael Vick lined up at wide receiver -- while trying to get into the end zone. Sio Moore plowed into Smith, knocking the ball loose, and TJ Carrie recovered.

Johnson, signed by the Jets as a free agent in April, took a shovel pass and stretched into the end zone for a 5-yard score that put New York up 10-7 just 30 seconds before halftime.

The Jets nearly got a touchdown on some trickery on the previous play when Vick lined up as a wide receiver, sprinted into the backfield and took a flip from Smith. Vick zipped a pass just wide of an open Eric Decker as the ball went off his fingertips in the end zone.

It ended a sloppy first half for the Jets, who were called for eight penalties, including one that was declined. The Raiders had no first-half penalties, and finished with four.

Stuck in Neutral
With Chicago's offense sputtering, is it time for Matt Nagy to return to Mitch Trubisky as his starting quarterback?
1 hour ago

Falcons Take Flight, Beat Panthers On TNF
The Falcons avenged an early season defeat to Carolina on Thursday night, earning their second win of the season.
18 hours ago

Can You Smell What Russ Is Cooking?
Russell Wilson is enjoying an MVP-caliber season. But, he’s going to need some help along the way, Martin Rogers writes.
23 hours ago

Mining for gold in Week 8
Geoff Schwartz explains why he likes the Niners to keep rolling in Seattle, and why you can trust Baker Mayfield, but not Tua.
1 day ago
those were the latest stories
Want to see more?
View All Stories
Fox Sports™ and © 2020 Fox Media LLC and Fox Sports Interactive Media, LLC. All rights reserved. Use of this website (including any and all parts and components) constitutes your acceptance of these Terms of Use and Updated Privacy Policy. Advertising Choices. Do Not Sell my Personal Info