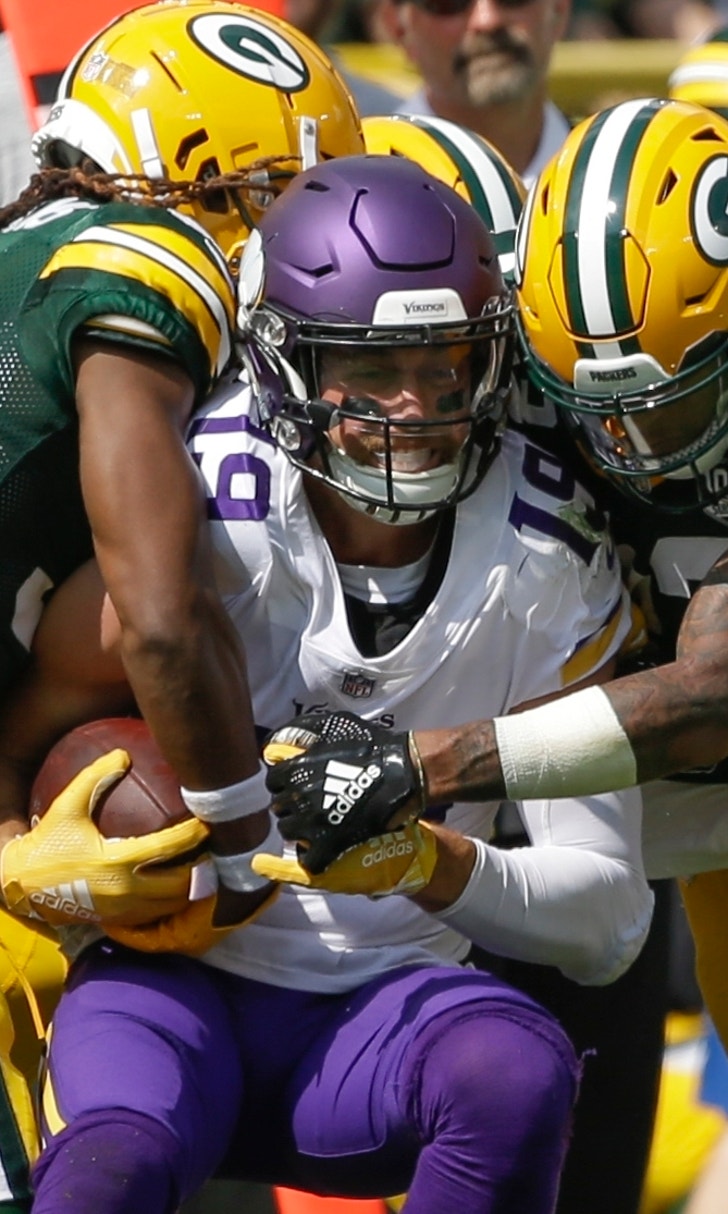 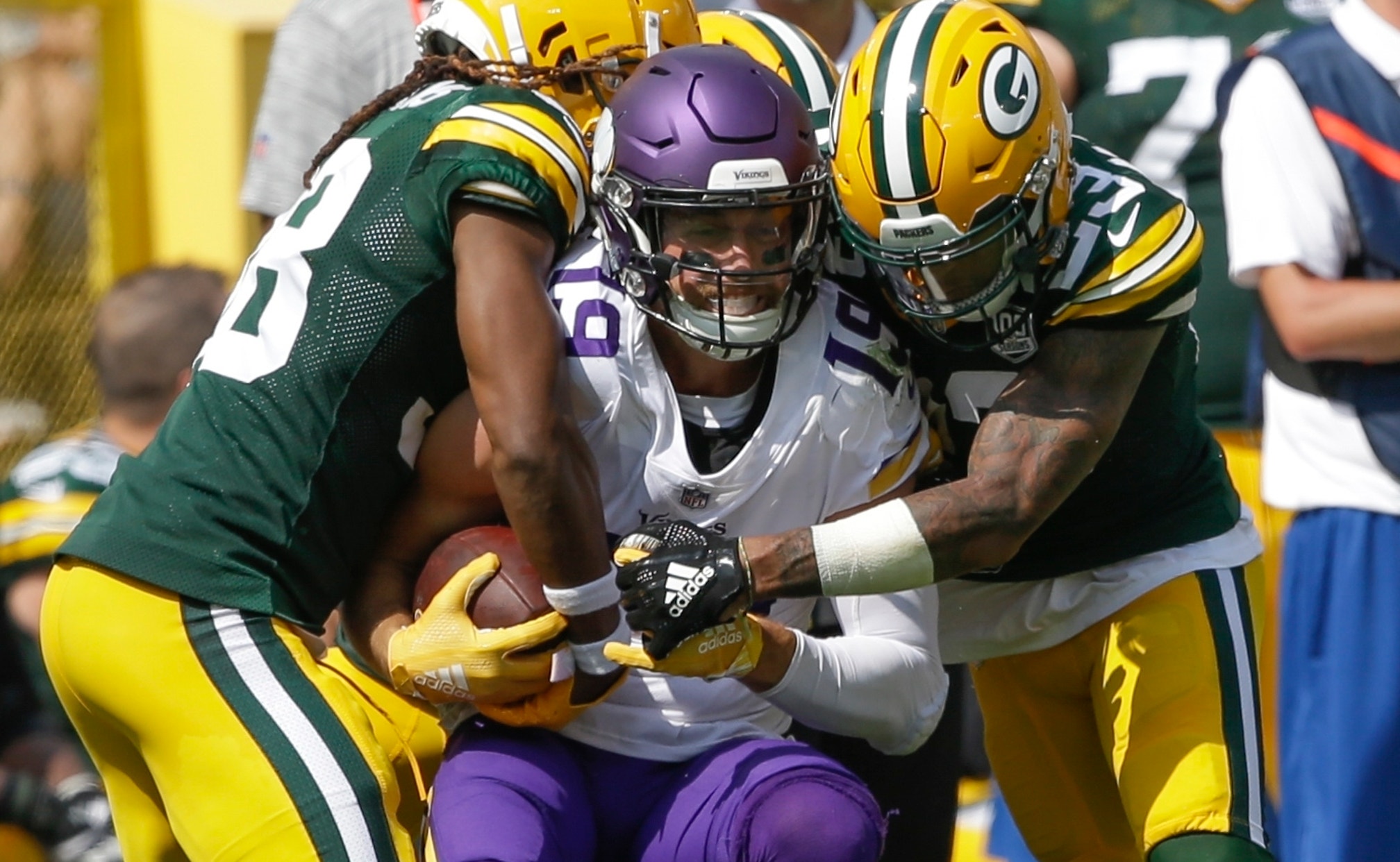 Daniel Carlson missed two field goals in overtime, including one from 35 yards as time expired, and the Minnesota Vikings had to settle for a 29-29 tie with the Green Bay Packers after rallying from a late 13-point deficit on Sunday.

The rookie's final attempt went to the right of the uprights, just like his kick from 49 earlier in overtime. Carlson also missed from 48 in the second quarter.

"It's disappointing when you've got an opportunity to win the football game there at the end and you come up with a tie. It's better than a loss," Vikings coach Mike Zimmer said.

It was the second straight week with a tie in the NFL after the Steelers and Browns played to a draw in their opener.

The result at Lambeau Field overshadowed memorable performances from both quarterbacks.

Green Bay star Aaron Rodgers played with a brace on his injured left knee and threw for 281 yards and a 9-yard touchdown pass to Davante Adams .

But a mishandled handoff with 5:17 left in overtime cost the Packers a chance at another long field-goal attempt. Rodgers recovered the fumble on second-and-1 at the 37, and he was sacked on third down to push Green Bay back to the 47.

"Close to an 'L.' Doesn't feel great," Rodgers said about the tie.

Minnesota's Kirk Cousins threw for 425 yards and four touchdowns, including three in the fourth quarter. He also threw an interception to Ha Ha Clinton-Dix after the ball bounced off the hands of Laquon Treadwell with 2:13 left.

Everything seemed to go the Vikings' way in the fourth, when they rallied from a 20-7 deficit. Until that point, the Packers had put together the kind of complete performance needed to support Rodgers, who got hurt in Green Bay's opening victory against Chicago.

Facing double coverage, Adam Thielen still caught a 22-yard touchdown pass from Cousins with 31 seconds left on a drive that included a roughing-the-passer penalty on Clay Matthews. Stefon Diggs caught a 2-point conversion pass to tie it at 29.

"I don't know where to start, to be honest with you. I have so many emotions running through as far as what a terrible call it was," Matthews said. "At the same time, I don't know what else to do."

The penalty negated an interception by Jaire Alexander with 1:45 left that would have allowed the Packers to run out the clock. Referee Tony Corrente said the call was not related to the new helmet-to-helmet rule.

"He picked up the quarterback and drove him into the ground," Corrente told a pool reporter.

Rodgers, who finished 30 of 42, didn't have his typical mobility that allows him to busy time for receivers.

But he was able to move around enough to scramble out of trouble on occasion. Operating out of shotgun or pistol formations also bought Rodgers more time.

The Packers (1-0-1), though, could have used more touchdowns from the offense.

They did get one on special teams after Geronimo Allison blocked a punt that was recovered by Josh Jackson in the end zone for a touchdown.

Carlson said he thought it might have been the first time he had missed three field goals in a game.

"I think I went out each time and it was a new kick," Carlson said. "Went out there confident, but something obviously was off and I've got to fix that and help this team."

The last attempt from 35 was set up with the ball placed between the hash marks, but Carlson still missed.

Crosby almost had six field goals, but his first, successful attempt from 52 at the end of the regulation was erased because the Vikings called timeout right before the snap.

According to the NFL , this is the first time since 1973 that there were two ties in the first two weeks of the season. The Lions-Packers game, along with the Eagles-Giants game, each ended a tie in week 2 that year.

It's also the first time in league history that a game ended in a 29-29 tie.

"We're disappointed with the outcome. Had a number of opportunities to come away with the win, but the tie, as they say, it is what is." — Packers coach Mike McCarthy.

Vikings starting right tackle Rashad Hill had to be helped off the field with a right ankle injury in the third quarter. He was then carted to the locker room after getting to the sideline.

MVP Watch: Brady Enters Fray
Russell Wilson has a firm lead in the MVP race, but a three-time winner with an unrivaled pedigree is creeping up the list.
2 days ago

NFL's Top Plays Of Week 7
Sunday's slate featured some of the wildest endings in recent memory. Here are the biggest moments from Week 7.
4 days ago
those were the latest stories
Want to see more?
View All Stories
Fox Sports™ and © 2020 Fox Media LLC and Fox Sports Interactive Media, LLC. All rights reserved. Use of this website (including any and all parts and components) constitutes your acceptance of these Terms of Use and Updated Privacy Policy. Advertising Choices. Do Not Sell my Personal Info