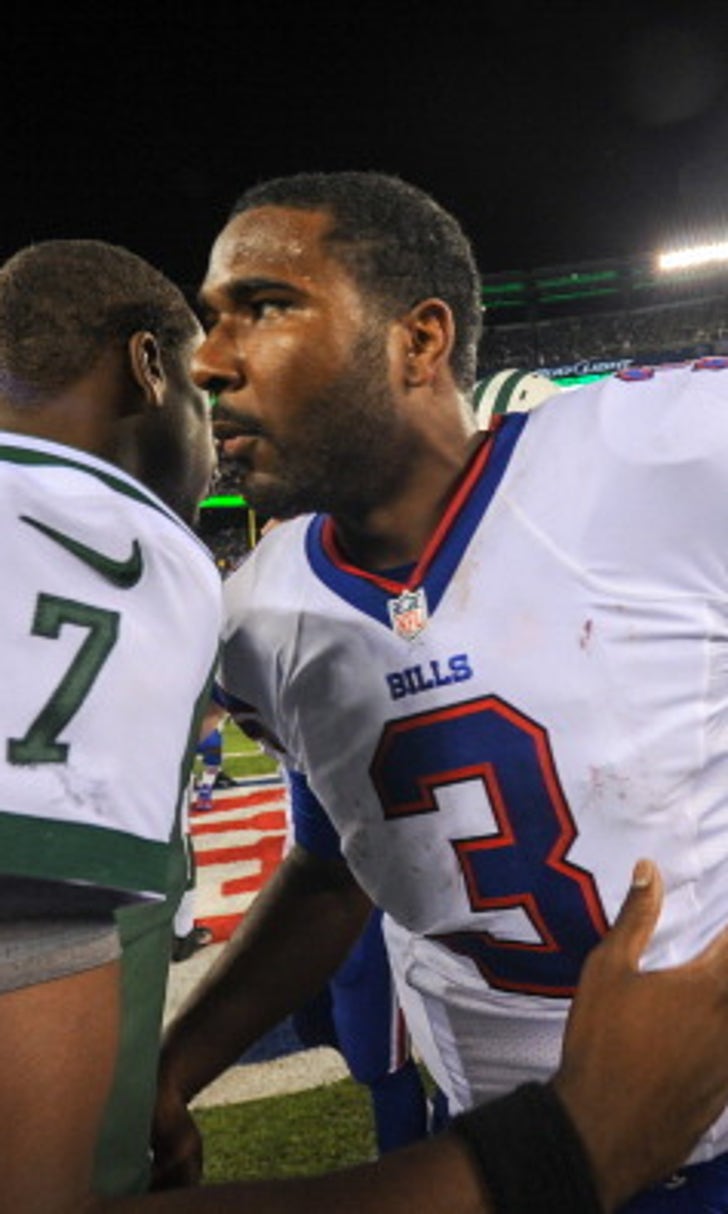 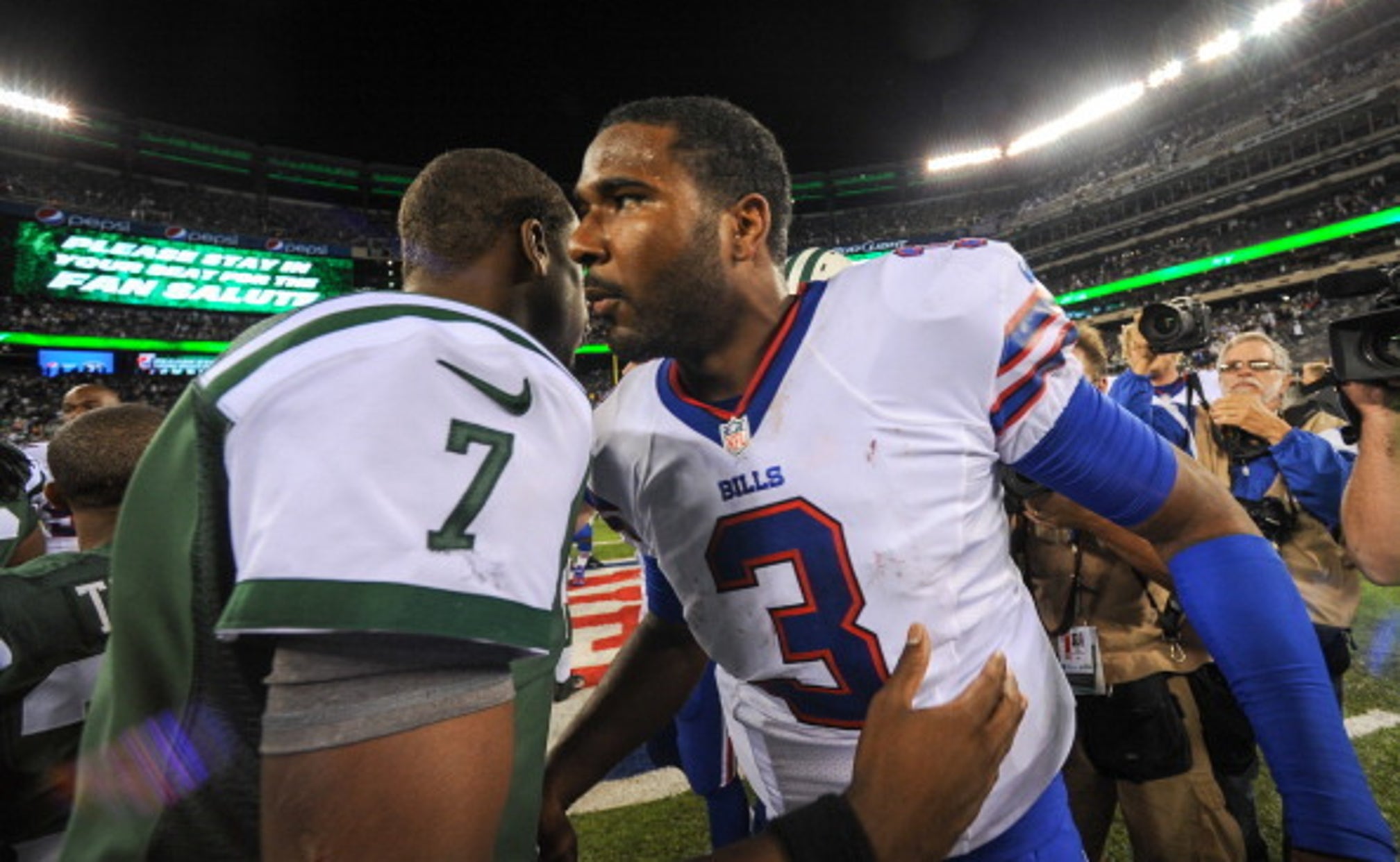 Can EJ Manuel or Geno Smith be a reliable starter? 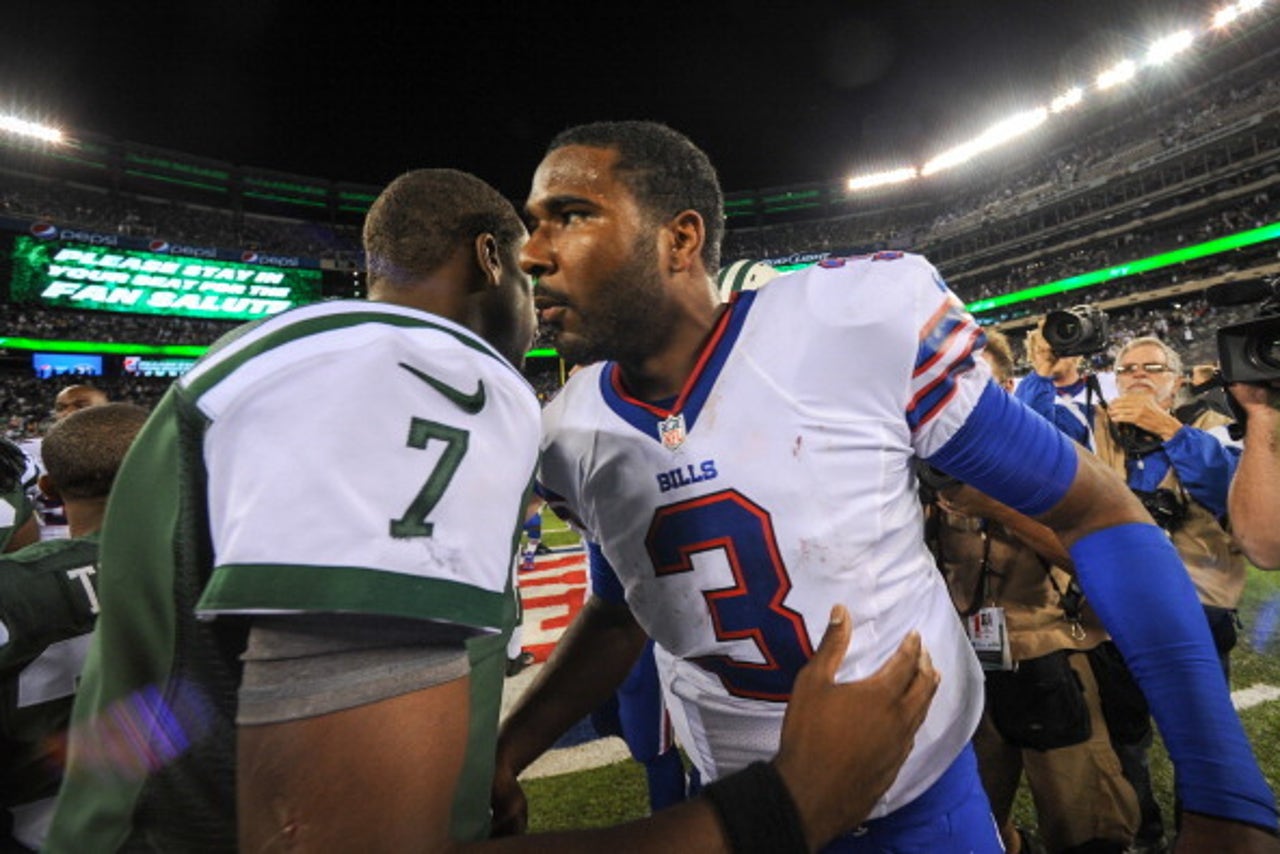 It was anticipated the 2013 NFL draft would be a black hole of suck at the quarterback position. Mock drafters and analysts routinely elevate average quarterback prospects each spring, often rightfully assuming the desperate search to find even competence leads to reaching.

And it did two years ago, but the object of desire was a surprise. The Buffalo Bills lunged at EJ Manuel with their 16th overall pick. He became only the third quarterback in team history selected in the first round. Meanwhile, Geno Smith—once billed as a potential top-10 pick—slid to the second round.

Here’s where we’re at two years later: They’ve thrown a combined 41 touchdown passes and 46 interceptions while averaging 6.7 yards per pass attempt, and 186.2 yards per game. They’ve also both completed less than 60.0 percent of their passes (58.6 for Manuel, and 57.5 for Smith).

Manuel was yanked and replaced with Kyle Orton after face planting in his second season. Now he’s acknowledging a reality that another journeyman replacement-level quarterback—this time it’s Matt Cassel—will give him tough training camp competition.

And Smith is still a starter right now only by default with the New York Jets as Ryan Fitzpatrick recovers from a broken leg. But similar to what Buffalo is bracing for, a quarterback competition that has a flailing potential bust on one side and a decent backup on the other awaits the Jets in training camp.

At this point, deciding between Smith and Manuel in a “who will have the better career?” discussion is a depressing exercise. It’s perhaps better approached with this question: “Will either have a career?”

That’s where two franchises find themselves, and both the Jets and Bills have reinforced the offensive supporting cast around their sputtering quarterbacks.

The case for EJ Manuel: Manuel’s only redeeming quality is the slice of athleticism he brings. He’s mobile enough, and over 10 starts during his rookie season the now 25-year-old ran for two touchdowns and 186 yards. Prior to that at Florida State he ran for 310 yards during his final collegiate season.

But he’s not remotely in the same stratosphere as, say, Colin Kaepernick in terms of mobility. That comparison is key, because new Bills offensive coordinator Greg Roman was able to construct an at-times thriving run attack during his time with the San Francisco 49ers, one spearheaded by the read option and the threat of Kaepernick galloping to the outside.

Instead with Manuel he has a quarterback who isn’t comfortable going through his progressions and making difficult reads. He’s inaccurate, and prone to making bad decisions.

That’s why Roman will likely aim to recreate a different 49ers offense: The one led by Alex Smith. LeSean McCoy can do the heavy lifting as a dynamic running back who has a significant presence in the passing game too, and tight end Charles Clay is also a reliable short-to-intermediate option who can churn out yards after the catch.

Cassel? He’s not impressive or exciting. But he’s the closest to Alex Smith 2.0. That could easily leave Manuel out of a job come Week 1, and put a dent in his future.

The case for Geno Smith: You have to squint to see it, but Smith has shown some fleeting promise. No really.

We can verify the NFL is a weird, strange football world when this statistical fact exists: During Week 17 Smith was the only quarterback in 2014 to post a perfect single-game passer rating. He completed 80 percent of his pass attempts against the Miami Dolphins, and their sixth-ranked pass defense.

But what’s confusing/baffling is that in Week 13 against the same team and the same defense, Smith imploded. He finished that game with a passer rating of only 36.7. Like Manuel, he struggles with accuracy and decision making, though there’s now hope the wingspan of wide receiver Brandon Marshall will help a bit with the former problem.

The verdict: Short term there’s more hope with Smith, who’s been inconsistent, but has still shown glimpses of what led to first-round consideration at one point. If Smith can hold off Fitzpatrick and get the top job, there’s also more long-term hope for him. But it’s the praying, reaching sort of hope, which is the worst kind.

Manuel? There’s some of that clawing hope for him too. But there’s a far greater chance he descends to permanent backup status soon.

Herd Hierarchy: Week 13
The Titans and Seahawks are the biggest movers in Colin Cowherd's latest rankings. As for the Chiefs? Not much has changed.
59 mins ago