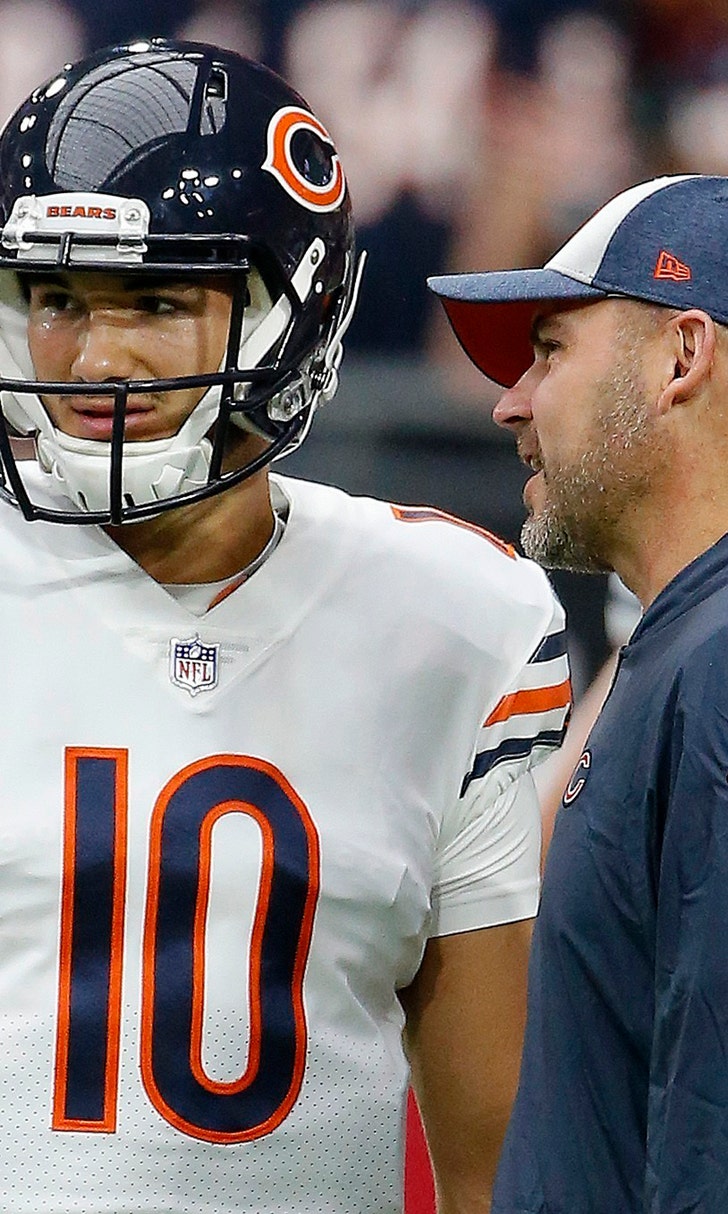 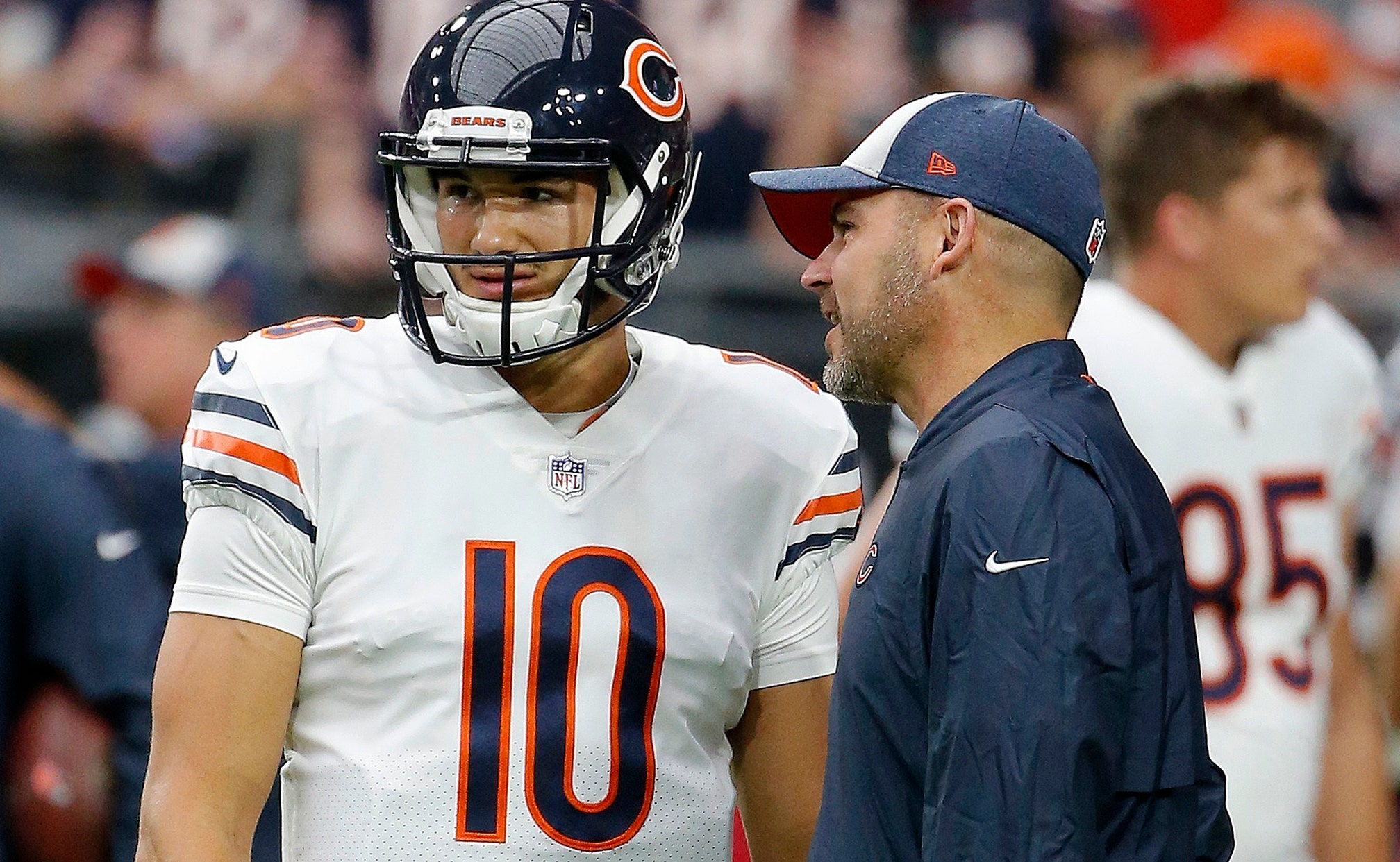 Bears have a different view of the draft this year

LAKE FOREST, Ill. (AP) — The Chicago Bears have a different view of the draft this year.

A worst-to-first jump last season left them staring down at the rest of the NFC North, and loaded with one of the league's best defenses and banking on a more creative offense led by quarterback Mitchell Trubisky to improve in coach Matt Nagy's second season.

As good as it all sounds, general manager Ryan Pace wasn't resting easy the past few months.

The Bears have a chance to do just that in the draft even with a long wait.

That's because they won't be selecting until the third round, at No. 87 overall, unless they make a trade. Chicago also has one pick each in the fourth and fifth rounds and two in the seventh.

The Bears' first-rounder went to Oakland in the blockbuster trade for All-Pro edge rusher Khalil Mack just before the start of last season. New England now has Chicago's second-round selection from a trade last year.

But even if they're little more than spectators in the early going, the Bears still have some work to do. They need a running back after trading Jordan Howard to Philadelphia and could use help in the defensive backfield, on the edge and at kicker.

But overall, the Bears have to like this view. They won their division at 12-4 in Nagy's first season after four straight last-place finishes and ended a playoff drought that dated to 2010.

The Bears created their biggest draft need when they traded Howard.

A poor fit for a scheme favoring pass-catching running backs, he set career lows in yards rushing (935) and attempts (250) in his third season. But he still had more carries than the four running backs currently on Chicago's roster — Tarik Cohen, Mike Davis, Taquan Mizzell Sr. and Ryan Nall.

If Chicago goes for a running back with its first pick, Penn State's Miles Sanders and Auburn's Damien Harris might be possibilities.

Though the Bears signed safety Ha Ha Clinton-Dix and cornerback Buster Skrine to replace Adrian Amos and Bryce Callahan, they could still use help in the defensive backfield. Iowa safety Amani Hooker and Michigan cornerback David Long could be options in the third round.

Don't be surprised if the Bears go for an edge rusher with one of their first picks. Sure, they tied for third in the league with 50 sacks. But with Leonard Floyd set to enter the fourth and final season of his rookie contract, Chicago might want to draft a potential replacement.

Pace has done some of his best draft work in the mid to late rounds since he was hired in January 2015, so there's a good chance the Bears get an impact player or two even despite having no early picks.

He hit in the fifth round in 2015 on Amos, who left for a $37 million, four-year contract with Green Bay in March. The Bears got Howard in the same round the following year, and he made a Pro Bowl while giving them two 1,000-yard seasons.

In 2017, Chicago took safety Eddie Jackson and running back Tarik Cohen in the fourth round. And both were All-Pros this past season — Cohen as a punt returner.

Defensive tackle Bilal Nichols had three sacks and seven quarterback hits in 14 games after being drafted in the fifth round a year ago.

"The job that (our scouts) do is remarkable and they help set the board, and you've got to give them a lot of credit," Pace said.

It's no secret the Bears need to find a reliable kicker. And keeping Cody Parkey was not an option.

If hitting uprights on six misses, including that double-doink off the upright and crossbar in the wild-card loss to Philadelphia at Soldier Field, didn't punch his ticket out of town, a "Today" show appearance a few days after the season did. He couldn't provide the consistency the Bears have been seeking since they let Robbie Gould go prior to the 2016 season and got released after one rough season in Chicago.

The Bears have three kickers with no NFL experience after signing Redford Jones, Chris Blewitt and Elliott Fry. Whether they draft another, they might add a veteran at some point.

A Tale Of Two 5-2 Teams
The Rams and Bears are both 5-2, but after their Monday night matchup, it's clear both teams are on different levels.
12 hours ago