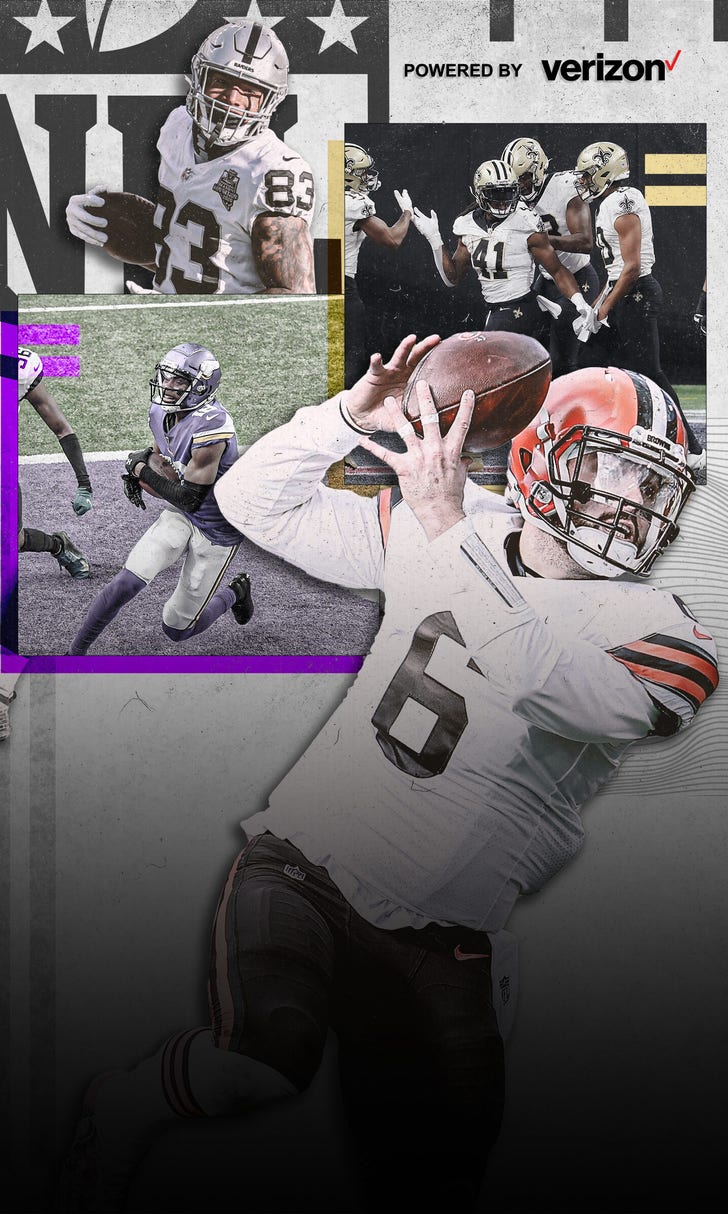 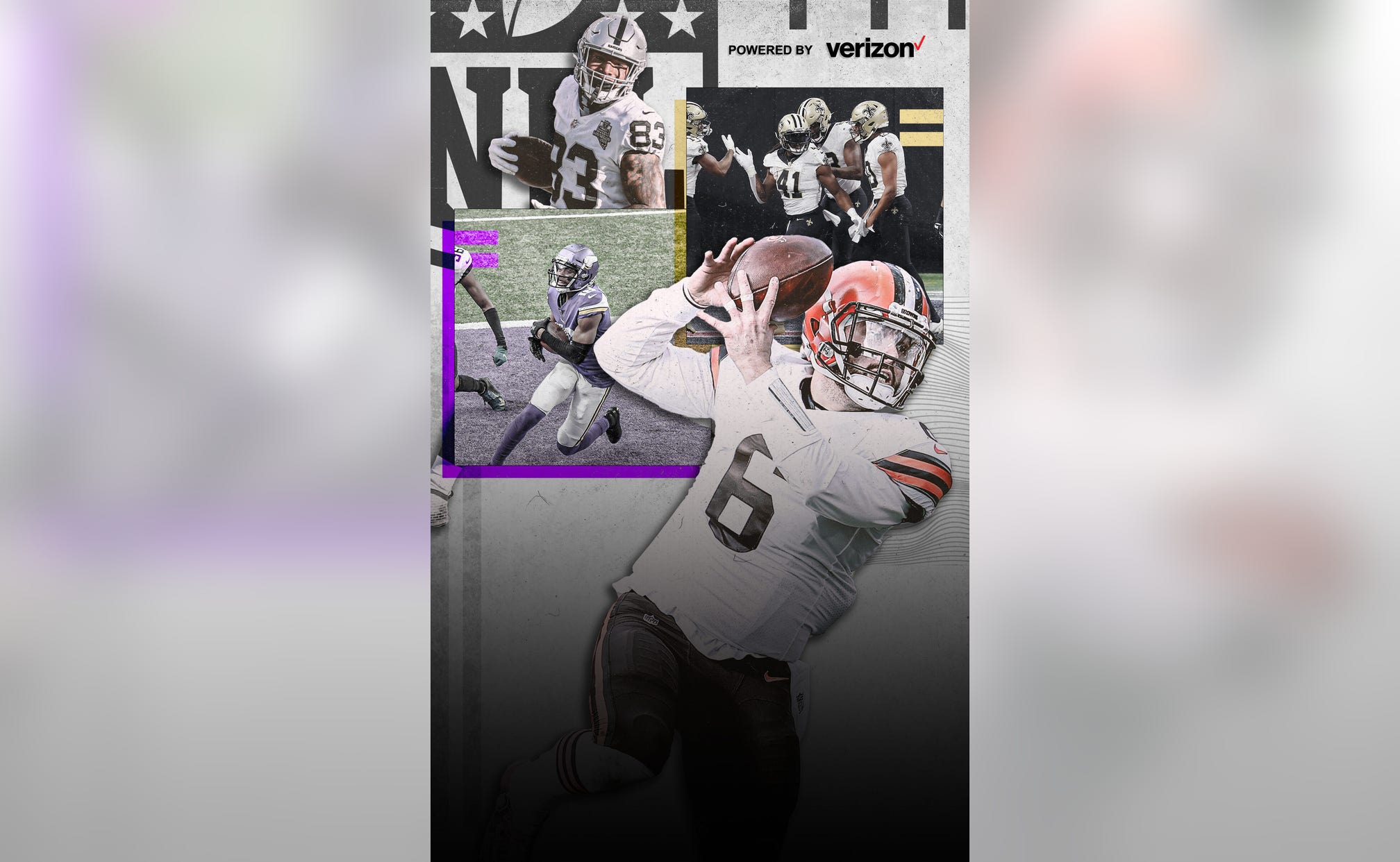 Week 13's early window certainly didn’t disappoint, as fans were treated to fireworks, including an offensive explosion between Cleveland and Tennessee, an overtime win for Minnesota, a must-see game-winning play for the Raiders against the Jets, and a whole lot more.

Here are the major takeaways from the early window of Week 13:

Have a day, Mr. Mayfield! 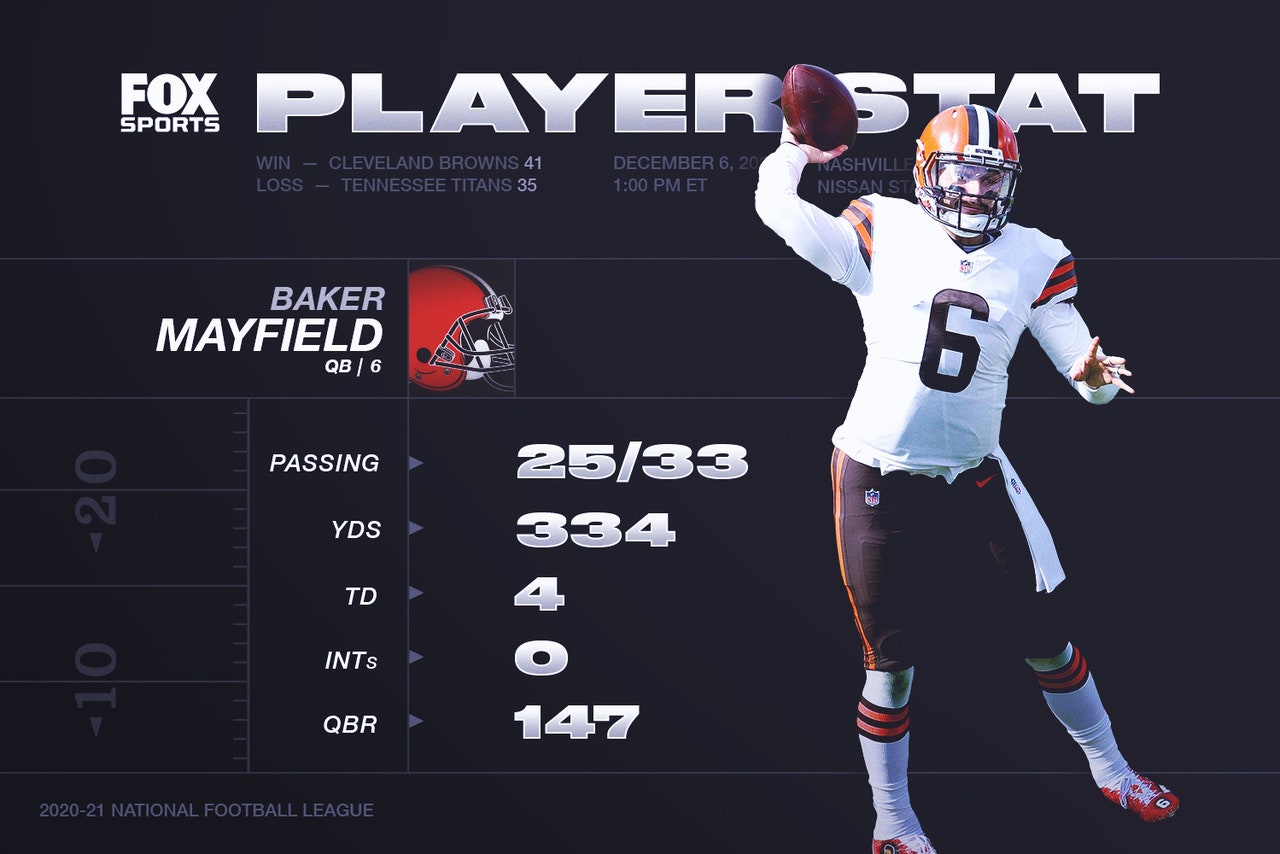 While most of the attention heading into this clash focused on the running games for the Browns and Titans, a good old-fashioned shootout between the quarterbacks became the story in Cleveland’s 41-35 win in Tennessee.

The Browns started the onslaught early, rolling out to a 38-7 first half lead thanks to a whopping four touchdown passes from Mayfield in the first 30 minutes.

Despite the massive hill to climb, the Titans didn’t pack it up in the second half.

Ryan Tannehill threw two TDs in the second half, and the Titans caught a huge break on a TD credited to MyCole Pruitt following an A.J. Brown fumble near the goal line.

In the duel between the QBs, Tannehill threw 45 times, completing 29 of his attempts for 389 yards, three touchdowns and one pick.

The highly touted rushing attacks for both teams remained relatively quiet. The Browns bottled up Derrick Henry for 60 yards on 15 carries, and even forced the Titans battering ram into an uncharacteristic fumble.

On the flip side, Nick Chubb (18 carries, 80 yards, one TD) and Kareem Hunt (14 carries, 33 yards) were held largely at bay. Both the Browns and Titans had matching 8-3 records coming into Sunday’s game, and the game certainly lived up to the hype.

For a moment, it looked as though the Jets were on track to claim their first win of the season.

With no timeouts left and the clock bleeding out, Raiders QB Derek Carr found a wide open Henry Ruggs III to let the air out of the balloon for the Jets.

The play helped Carr redeem himself for a costly fumble early in the fourth quarter, which the Jets turned into a touchdown for a 28-24 lead at the time.

Las Vegas responded by turning the ball over on downs on its next possession, but Sam Darnold and the Jets were unable to get the crucial first down needed to ice the game. Once New York punted to Las Vegas, Carr’s Raiders mounted their decisive drive.

Lost amid the late-game chaos was a colossal day from Raiders tight end Darren Waller, who went off for 200 yards and two touchdowns on 13 catches.

With the win, the Raiders jumped to 7-5, while the Jets remained winless. But on the bright side for the Jets, they remain in the lead for the No. 1 overall pick/Trevor Lawrence sweepstakes.

The New Orleans Saints won their ninth consecutive game in a 21-16 victory over the Falcons, booking a spot in the playoffs after the Chicago Bears lost to the Detroit Lions.

In his third start at QB in the sted of the injured Drew Brees, Taysom Hill tossed his first career touchdown pass about midway through the first quarter.

Hill wrapped up 27-for-37 with 232 passing yards and two touchdowns, to go along with 14 rushes for 83 yards. Alvin Kamara led all rushers with 88 yards and a touchdown on 15 carries.

The Saints also shined defensively, corralling Atlanta to 273 yards in the air and 70 on the ground, keeping the Falcons out of the end zone until the fourth quarter.

That touchdown from Matt Ryan to Russell Gage made it a one-possession game, and while Atlanta gave New Orleans a scare down the stretch, the Saints ultimately held on to move to 10-2 on the season.

Vikings squeak by Jaguars in OT

Considering the way the Jaguars got on the board on their opening possession – a deflected ball that fell to wideout Laviska Shenault Jr. – it should have been a warning that this game had some surprises in store.

Despite combining for 12 punts, both the Jaguars and Vikings brought plenty of intrigue on offense. Vikings running back Dalvin Cook tallied 120 yards on 32 carries, but it was rookie wideout Justin Jefferson who really stole the show with nine catches for 121 yards and a touchdown.

Jefferson’s performance put him among some elite company.

Another rookie, Jags running back James Robinson, continued his strong debut campaign with 78 rushing yards and a game-tying touchdown in the fourth quarter.

Both the Vikings and Jaguars had a chance to break the deadlock in the game’s final minutes, but Dan Bailey missed a 51-yard field goal attempt wide left and Jaguars kicker Chase McLaughlin’s 62-yard effort fell short as time expired in regulation.

The Vikes punted on their first possession in overtime, but Harrison Smith intercepted Mike Glennon to give Minnesota another bite at the apple.

From there, the Vikings drove down the field to set Bailey up with a chip shot 23-yard field goal attempt, which the veteran kicker drilled to give the Vikings a 27-24 win.

The Indianapolis Colts and Houston Texans put on an offensive showcase in the first half of a 26-20 win for Indianapolis, followed by a defensive clinic in the second half.

Philip Rivers threw for two touchdown passes in the first two quarters, as the Colts scored 24 first half points, while Deshaun Watson and the Texans kept it close with 20 first half points of their own.

The script flipped in the second half, however, with a safety favoring the Colts being the only points put on the board in the game’s final two quarters.

Houston had a late crack at a win in the game’s final 1:30, but a bad snap doomed their chances, as the Colts jumped on the loose ball.

Darrell Bevell’s first game as interim head coach of the Detroit Lions will be one he’ll never forget.

Not only because of the occasion for Bevell and the outcome for the Lions, but the dramatic way in which they pulled it off.

Down 10 points in the fourth quarter, the Lions racked up two touchdowns in 41 seconds to take their first lead of the game at 34-30.

After snagging the lead, Detroit’s defense stood tall against Mitchell Trubisky and the Bears, forcing a turnover on downs in the red zone.

Detroit’s Adrian Peterson continued to defy Father Time throughout the game, rolling up a pair of touchdowns in his 16 carries for 57 yards.

Matthew Stafford eclipsed the 400-yard mark in the air, hurling the ball 42 times for 27 completions with three touchdowns and an interception.

Trubisky had a solid 267-yard passing day for the Bears, but his fumble to set up Detroit’s game-winning touchdown proved to be a fatal miscue.

A 296-year outing from rookie Dolphins QB Tua Tagovailoa in his return from injury was marred by a series of ejections in an undisciplined game between Miami and the Cincinnati Bengals.

And Boyd found the end zone on a 72-yard catch-and-run touchdown to put the Bengals up early.

But both players wouldn’t finish out the game, as they were ejected following a scuffle in which the referees said punches were thrown.

The ejections didn’t stop there, though, as more disqualifications came after a dust-up on a punt return.

Tom vs. Time: The Ultimate Mismatch
At age 43, Tom Brady continues to defy the doubters, upending conventional logic and, yes, hunting yet another Super Bowl.
6 hours ago

Who's to Credit?
Do the Bucs deserve praise, or is Drew Brees to blame for Tampa Bay's victory over New Orleans? The reactions are split.
11 hours ago

Sports World Honors Dr. King
Dr. Martin Luther King Jr. was a pioneer unlike any other, and the sports world is spending Monday celebrating his legacy.
15 hours ago
those were the latest stories
Want to see more?
View All Stories
Fox Sports™ and © 2021 Fox Media LLC and Fox Sports Interactive Media, LLC. All rights reserved. Use of this website (including any and all parts and components) constitutes your acceptance of these Terms of Use and Updated Privacy Policy. Advertising Choices. Do Not Sell my Personal Info