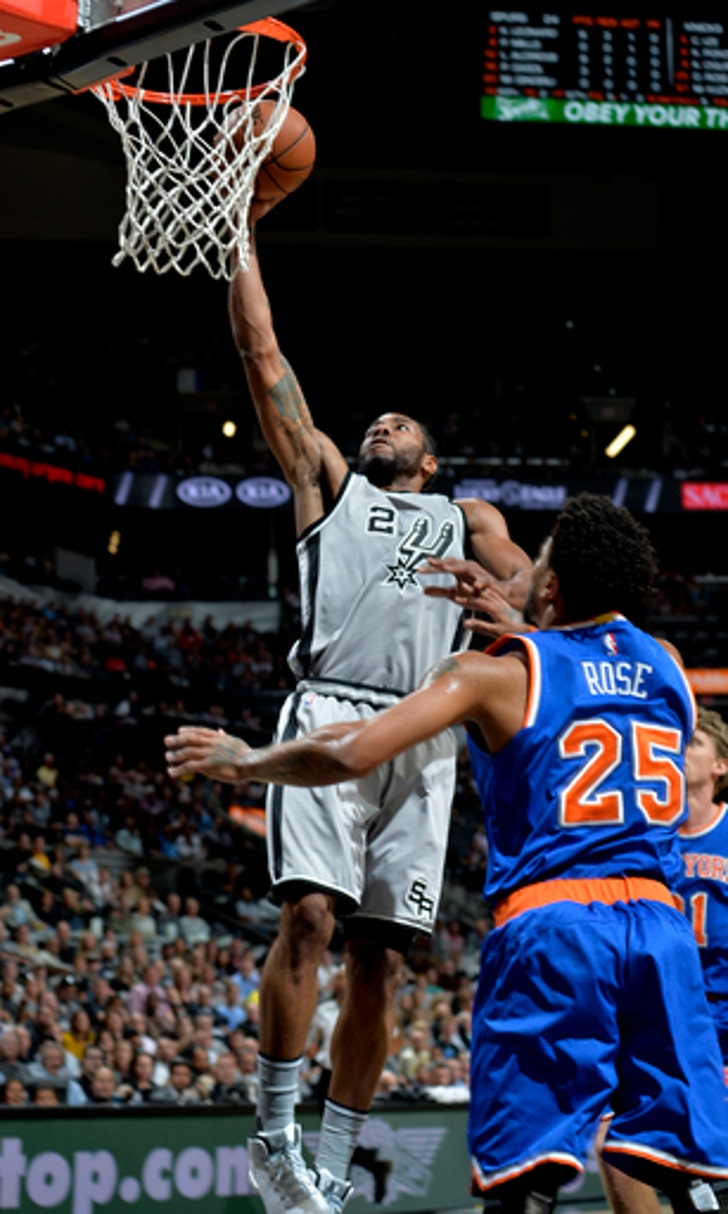 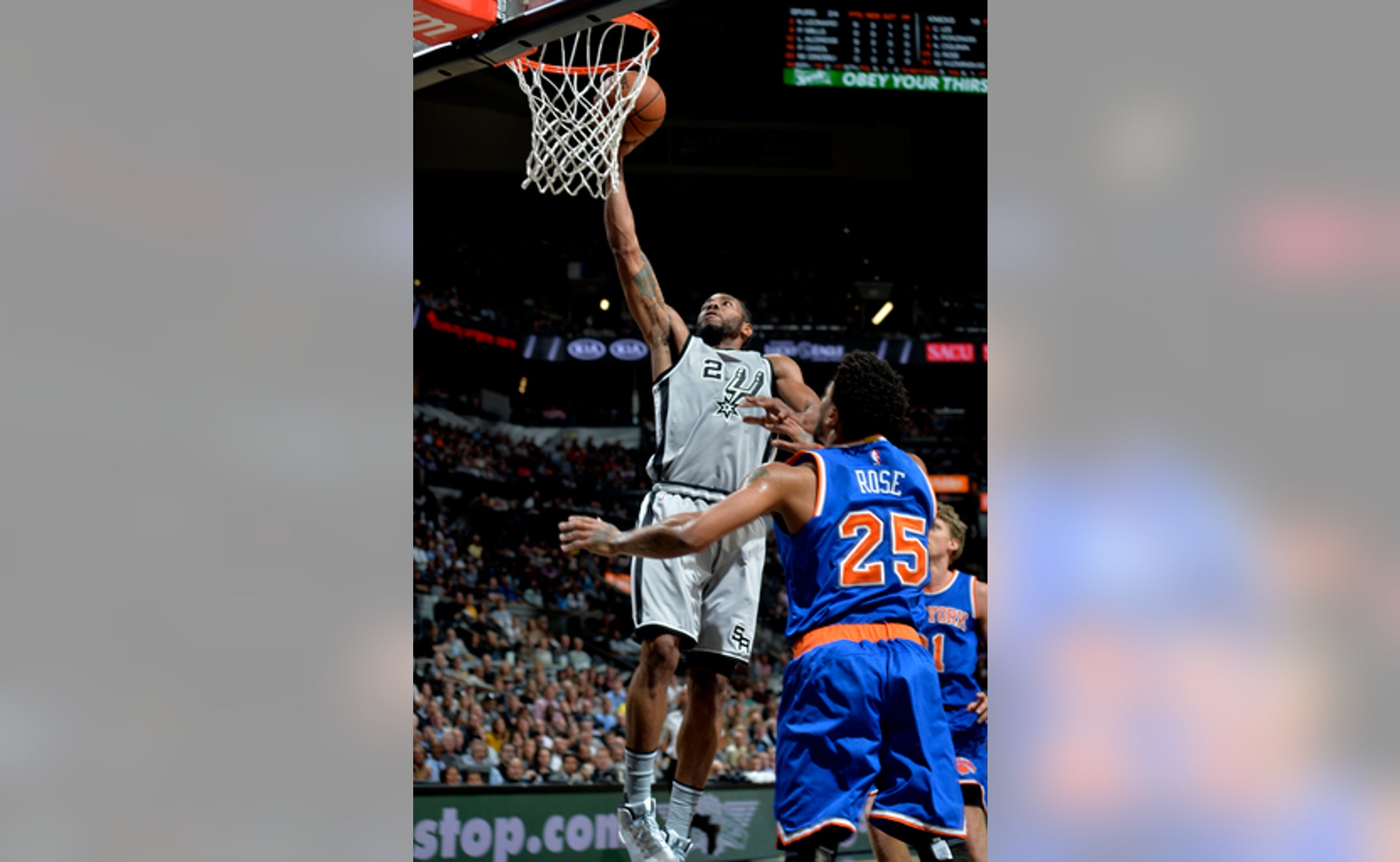 SAN ANTONIO (AP) Even with a difficult schedule ahead, the San Antonio Spurs refused to overlook the New York Knicks.

San Antonio has won four straight heading into home games against Cleveland on Monday and Golden State on Wednesday. The Spurs (56-16) are two games behind the Warriors (58-14) for the league's best record.

''If you look at the standings, you may think that we're great and we're in a good situation,'' San Antonio veteran Manu Ginobili said. ''But I don't have the feeling that we are ready yet, that we're playing at a level in which we are ready to go face whoever we're going to play in the playoffs. But we're in a good situation. I wish and I think that we could be paying better at this point. Hopefully we get better in these next two games.''

The Spurs nearly had a repeat of their 94-90 loss in New York on Feb. 12. San Antonio lost its focus in the second half, clinging to a three-point lead early in the final quarter after blowing a 20-point lead.

''We had too many defensive breakdowns,'' said Spurs center Pau Gasol, who had 19 points and 10 rebounds. ''They were getting in the paint too easily, which forced us to get bodies off other bodies. They got to many easy looks and they made the run.''

Willy Hernangomez had a career-high 24 points and added 13 rebounds. Derrick Rose also scored 24 points and Mindaugas Kuzminskas had 19 points starting in place of Carmelo Anthony, who missed his second straight game with a sore left knee.

Kristaps Porzingis had 12 points while being limited to 26 minutes due to foul trouble. He picked up his third foul with 3 minutes remaining in the first quarter and his fifth a minute into the fourth but did not foul out.

Mills had 10 points in the final quarter, including a pair of 3-pointers, to stop the Knicks' rally.

Knicks: Anthony has missed four games this season, including three because of a sore left knee. The other game he sat out was due to a sore right shoulder. ... New York is 11-29 in 2017, including four losing streaks of three games or more. ... New York's starting backcourt of Rose and Courtney Lee outscored San Antonio's Parker and Jonathon Simmons 30-16. Rose and Lee outscored Parker and Danny Green 27-6 in the team's first meeting.

Spurs: Leonard has scored in double figures in 99 straight games. ... Green was a late scratch, missing the game for rest. He has sat out two games for rest. ... The Spurs joined the Lakers and the Celtics as the only franchises with 55-plus wins in 20 seasons. ... Rookie point guard Dejounte Murray missed his eighth straight game with an injured left groin.

Spurs coach Gregg Popovich was bemused when a reporter asked if he had to motivate the Spurs late in the regular season considering they clinched a postseason berth three weeks prior.

If they get bored?

''Then I should play someone else,'' Popovich said. ''If I have guys that are getting bored, then we'd probably have 10 wins. Why would you have somebody on your team that's getting bored? Getting paid a gazillion of bucks and they're bored?''

Porzingis said he is still learning how to play defensively after battling foul trouble.

''That's something that I've always had trouble with,'' second-year player said. ''I try to be aggressive on defense, but I've got to find that balance where I'm still aggressive, but I'm not fouling. It's tough some games.''

Porzingis was able to play the entire game despite playing the final 11 minutes with five fouls.

''I hate that he fouled, but I liked that he didn't just let them have a layup,'' coach Jeff Hornacek said. ''He's still battling. He's trying not to give up easy shots.''

Getting On The Board
Jaylen Brown's magic number helped the Celtics avoid an insurmountable deficit, as the curse of home court continued.
1 hour ago

'It Pissed Me Off'
When asked about the MVP race at Friday's postgame press conference, LeBron James pulled no punches regarding the results.
13 hours ago