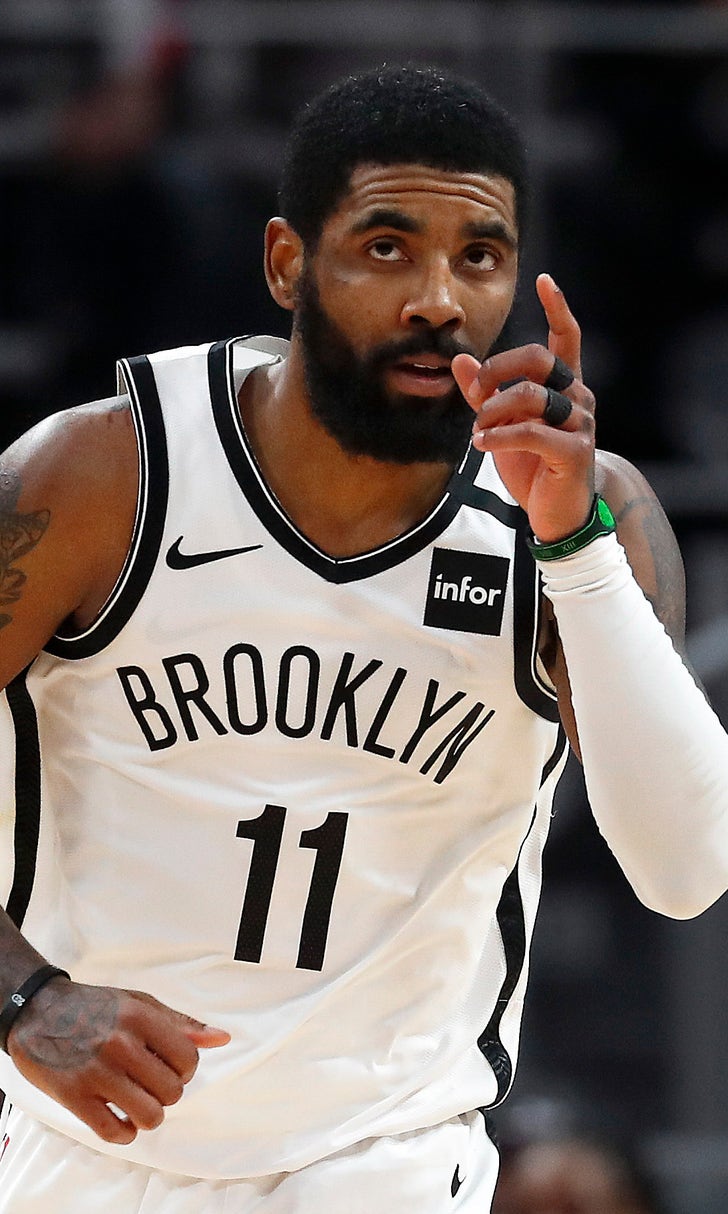 previous story
Okongwu and USC cruise in 75-55 win over Oregon State
next story
Baldwin's flurry leads No. 13 Butler past Marquette in OT

PHILADELPHIA (AP) — With a tribute to Kobe Bryant written on his Nikes, LeBron James moved past the retired Los Angeles great for third place on the NBA's career scoring list, scoring 29 points in the Lakers' 108-91 loss to the Philadelphia 76ers on Saturday night.

James scribbled "Mamba 4 Life" as he chased Bryant, the five-time champion, in Philly. James scored the milestone basket with 7:23 left in the third quarter. James entered 18 points shy of passing Bryant, and the layup gave him 33,644 points. James stands third with 33,655. Bryant finished his career with 33,643, all with the Lakers.

“Continuing to move the game forward @KingJames. Much respect my brother #33644,” Bryant tweeted.

James waved to the Philadelphia crowd that gave him a rousing standing ovation when the mark was announced by the public address announcer. The Sixers also posted a graphic of the NBA's top 10 career scorers with images of James in Lakers and Miami Heat jerseys.

The 35-year-old James entered averaging at least 25 points (25.2 ppg) for the 16th straight season and has played 44 games this season. Kareem Abdul-Jabbar is the NBA's career scoring leader with 38,387 points and Karl Malone is second at 36,928. James is on pace to pass Abdul-Jabbar in about three seasons. The top four scorers in NBA history played for the Lakers, who signed James as a free agent in 2018.

James passed Bryant in Philadelphia, where the retired Lakers star was born.

Ben Simmons had 29 points and 10 rebounds and Tobias Harris scored 29 points. The Sixers improved to 6-3 since they lost All-Star center Joel Embiid with a torn ligament on a finger in his left hand. Embiid hoped to return as soon as next week.

DETROIT (AP) — Kyrie Irving scored 17 of his 45 points in the third quarter to overcome a double-digit deficit and Brooklyn went on to beat Detroit in overtime.

The franchises are among many sub-.500 teams in the Eastern Conference, likely vying for the last two spots in the playoffs.

Irving made free throws early in the extra period to put Brooklyn ahead and end a five-game losing streak.

The Nets went ahead 106-104 with 38.4 seconds left in regulation when Andre Drummond was called for goaltending. Derrick Rose had an unforced turnover on the ensuing possession, then made up for it with a tying layup with 1.9 seconds left.

Irving missed a 3-pointer just before the buzzer, sending it to overtime.

Rose had 27 points for Detroit, scoring more than 20 for the 12th straight game to extend his career high.

LaVine made 16 of 30 shots and had 27 points at halftime. The 6-foot-5 guard also had 10 rebounds and eight assists, falling just short of his first career triple-double.

It was LaVine's second big game against Cleveland in eight days. He scored 42 points Jan. 20, including 21 in the fourth quarter when the Bulls rallied from a 15-point deficit to win.

Kevin Love had 20 points and 11 rebounds for Cleveland. The Cavaliers have lost seven straight and 12 of 14.

Donovan Mitchell scored 25 points, and Bojan Bogdanovic added 23 for the Jazz. They have won 14 of their last 15.

Karl-Anthony Towns scored 37 for the Timberwolves. They have lost nine in a row.

What Sports Fans Can Be Thankful For
2020 has been a year unlike any other. As Martin Rogers writes, sports have been there for us the entire time.
18 hours ago