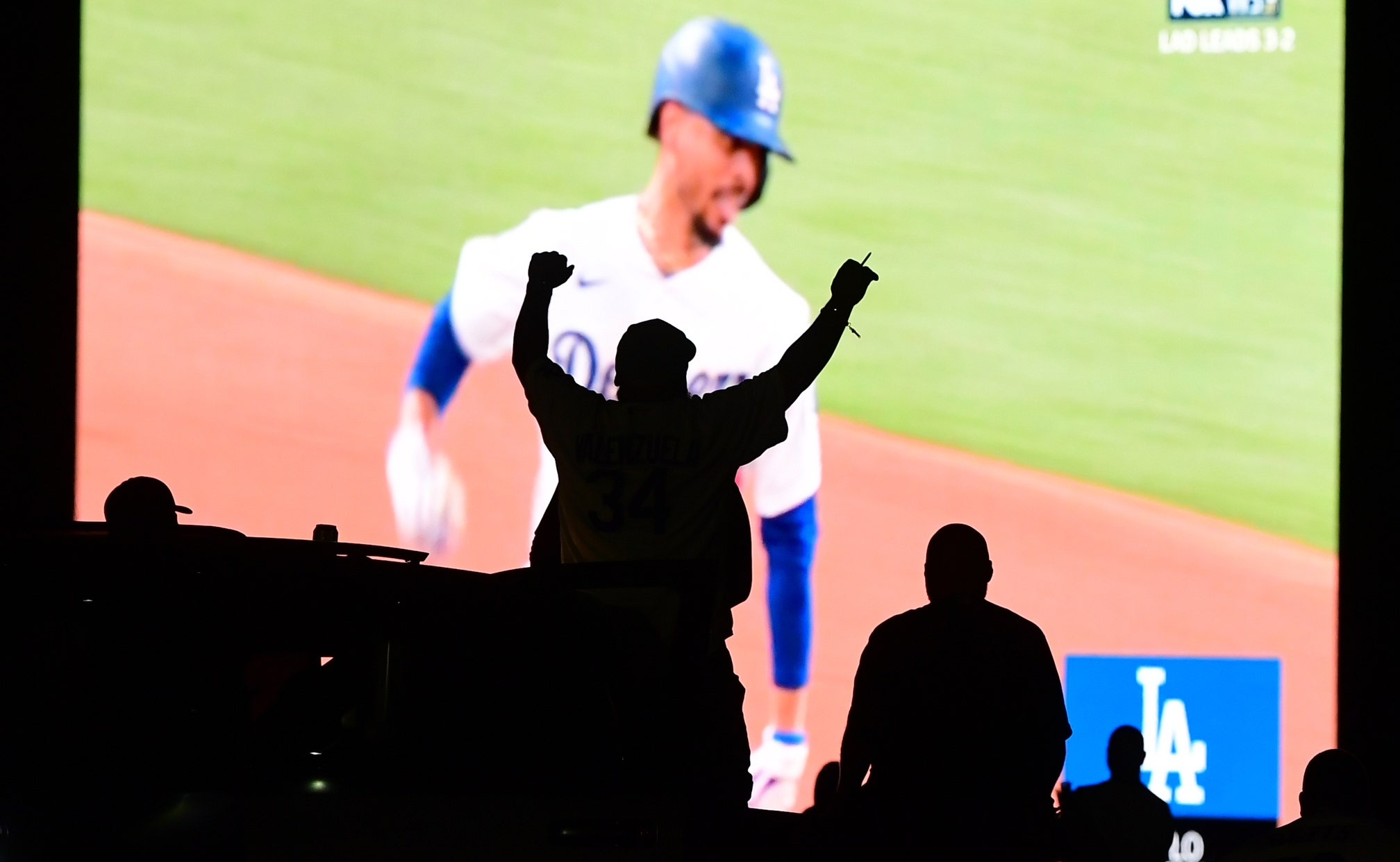 Before this year, loving sports was already a chaotic experience, one dictated by other people's actions that have both everything and nothing to do with you, the fan. But 2020 took that chaos, strapped it into a roller-coaster, and cut the brakes.

The World Series put those complex feelings into overdrive. We'll get into the fact Justin Turner was pulled from Game 6 due to a positive COVID test, only to pop up during the celebration. However, let's start with something slightly simpler: How did it feel to watch this World Series as someone who wishes Mookie Betts were still in a Red Sox uniform?

You could argue Tampa Bay Rays manager Kevin Cash lost the World Series when he pulled Blake Snell in the sixth inning ... and you wouldn’t be wrong.

But you also could argue Mookie Betts won the World Series for the Los Angeles Dodgers with ... (gestures wildly at everything) ... and because he kicked off a two-run inning for LA after Snell left the game and added a valuable insurance run with a homer in the eighth.

Either way, Mookie was the difference-maker this season for the Dodgers.

After two failed attempts to win the World Series in the past four years, the third time was finally the charm for LA, and Dodgers fans are celebrating their first title since 1988. Because they finally had a lucky charm. They had the best player in the game — yeah that’s right, I said it — after acquiring Betts from the Boston in February and signing him to a 12-year extension this summer.

Mookie not only helped end a 32-year drought for the Dodgers, he saved legacies. The difference between how baseball fans would’ve talked about Clayton Kershaw if he — the best regular-season pitcher in a generation — hadn’t won a championship is vastly different from how he’ll be considered now that he has a ring.

Kershaw pitched well in the postseason, going 2-0 with a 2.31 ERA in the World Series. He defended his own narrative. But Mookie was the superstar Kershaw and the whole team could count on. Just like he did Tuesday night, Betts got the bats moving all season and rallied his team to defend the leads any of its pitchers secured.

Mookie Betts is, simply put, the guy you want on your team.

So naturally, over the past few weeks, a lot of people have asked me if, as a Boston fan, I’m actually happy for Mookie Betts.

My answer is always yes.

Seriously! I’m not talking about the kind of yes that means, “No, but I’m too embarrassed to admit that if he can’t win for my team, I would like him to lose.” When the Dodgers clinched the pennant, I explained why. To make a long article short and save you a click: Betts is a once-in-a-generation talent who plays with infectious joy.

I’m no saint, but I’m not selfish enough to want to snuff out a light as bright as Betts simply because he doesn’t play for the Red Sox anymore.

Especially when Boston never made him a competitive offer. That’s something the occasional Red Sox fan will bring up to me on Twitter. They say I’m wrong to be sad he left, and they're angry the Sox let him, arguing Mookie didn’t want to play for Boston. They say the money the Sox saved from paying the luxury tax (eye roll) on his huge contract will be worth it since he wasn’t interested in sticking around.

OK, sure. If Mookie didn’t want to play in Boston, fine. But it's a disservice to the Red Sox and their fan base that the Sox didn’t even make an offer to entice him to stay. They acted like he was merely another replaceable player.

This Fall Classic made it clear that he isn’t.

The less altruistic reason I wanted the Dodgers to win was to prove the Sox’s actions were illogical.

Mookie isn’t the only superstar who has ever left a team. But the fan reaction — do you wish the player well, or do you hope for failure? — depends on circumstance. It’s hard to talk about Mookie Betts without talking about Tom Brady, who waltzed away from New England after two decades and six Super Bowls. Most people in the Northeast seem to hope Brady succeeds in Tampa, even though the Patriots now resemble the Bengals. Fans also don’t seem too mad at the Pats.

It was time, they say.

That’s because Brady was allowed to grow old with us. He gave the fans everything he had. He took pay cuts and the fall for Deflategate to stay in Foxboro. He turned a region of losers into a region of fans so insufferable that the rest of the country hates us.

But here’s the truth of the matter: Wanting a player to succeed is not the same thing as enjoying it when it happens.

It stings watching Brady throw four TD passes and run for another on the same day Cam Newton was benched for Jarrett Stidham. The Patriots’ stats are the worst they’ve been in decades.

It totally sucks watching Mookie steal a historic amount of bases when the Red Sox didn’t make the postseason. I’m jealous of Los Angeles, and I’m jealous of Tampa Bay (the football team, not the baseball team — thoughts and prayers to Snell, Cash and the rest of the Rays).

I also just can’t believe how much attention I’ve had to pay to Tampa this year, but I digress.

I know I sound spoiled being upset about Betts and Brady. What more could Red Sox fans want? Boston has won four World Series this century, shattering the Curse of the Bambino. What else could Patriots fans possibly ask for? There are 18-year-olds in Boston who don’t know what it’s like to root for a team below .500.

But sports are about winning, and fandom is bizarre. There’s something endlessly fascinating about the emotions people attach to outcomes they can’t control and people they’ll never meet. Loving a sports team means outsourcing feelings. It’s a safe way to experience highs and lows that — with the exception of losing money on a bad bet — doesn’t have a direct impact on fans’ lives.

And yet, it’s intensely personal. Silly as it sounds, I truly feel sick to my stomach when I remember the day I found out Mookie was gone. I screamed “WHYYYY?!” on the couch when he homered. No one likes being left, even if the person leaving is an athlete who doesn’t know you exist. It’s human nature to bristle when others have what you want. 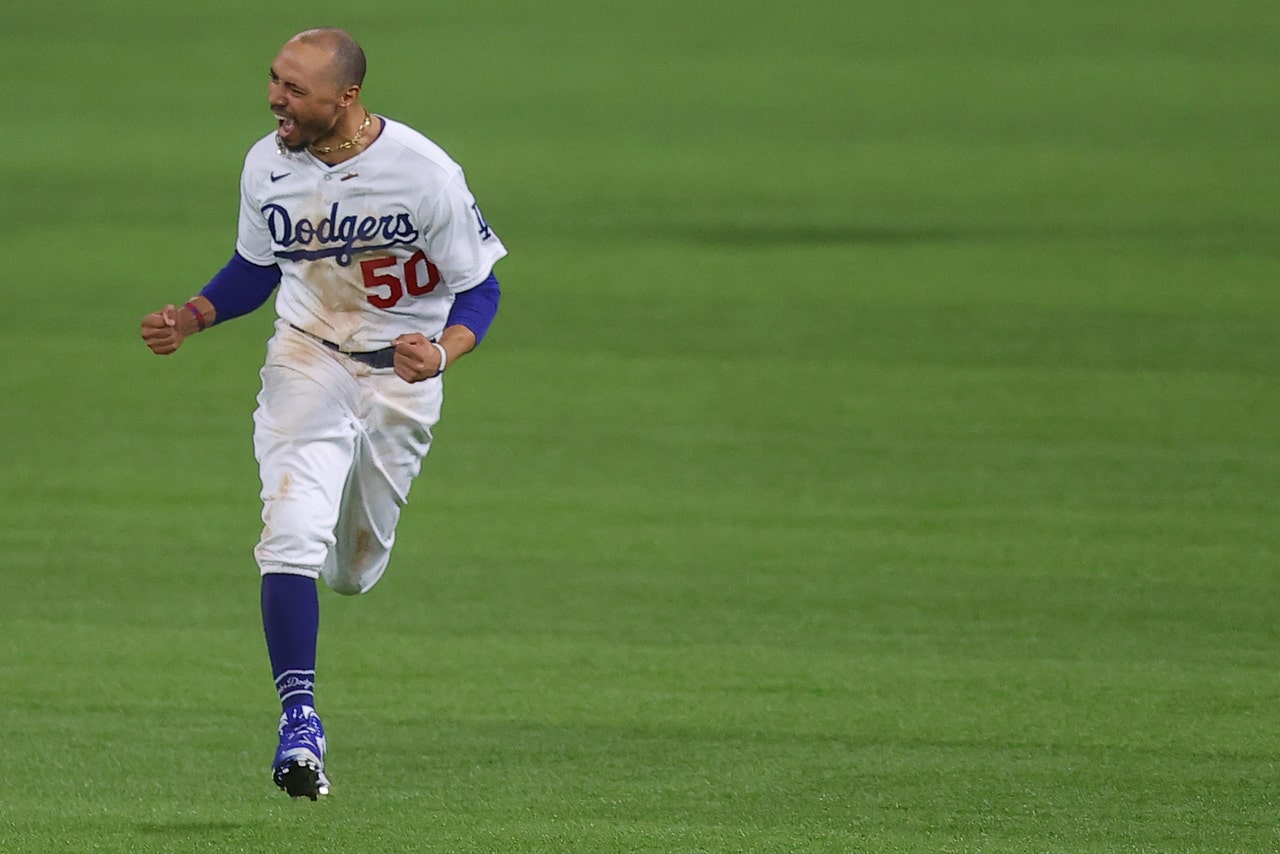 Mookie Betts celebrates the second World Series title of his career and the Dodgers' first in 32 years.

So, of course, it’s unpleasant when your team hands another team a once-in-a-generation talent with a bow and a card that says, “We loved winning a World Series with this guy. Now it’s your turn!”

But 2020 always finds a way to complicate things, and the Dodgers’ first win since 1988 was overshadowed by a horrible reminder that this year has thrown curveballs every chance it gets. Justin Turner was pulled in the eighth inning because of a positive COVID-19 test. The country watched as Turner — who’d been asked to isolate — strode out onto the field postgame to celebrate with his teammates, kiss his wife and pull his mask down to smile for the team picture next to cancer survivor Dave Roberts.

It was such a deflating moment after the high of watching Mookie and Kershaw sprint toward the mound to embrace Julio Urias, elated at reaching the height of their sport. It was also a reminder of how sports are less of an escape from the real world and more of a mirror.

In 2020, it has felt like the only way to make it through every day is to compartmentalize. So many things are true at once: You can be thrilled for the Dodgers and dismayed at Turner’s actions. It can totally suck watching the Dodgers get a ring with the guy who left you, you can also be happy that Mookie and his new team did.

At least that’s what I tell myself as I look at pictures of Mookie celebrating his second World Series in two years, this time wearing Dodger blue, and cry myself to sleep.