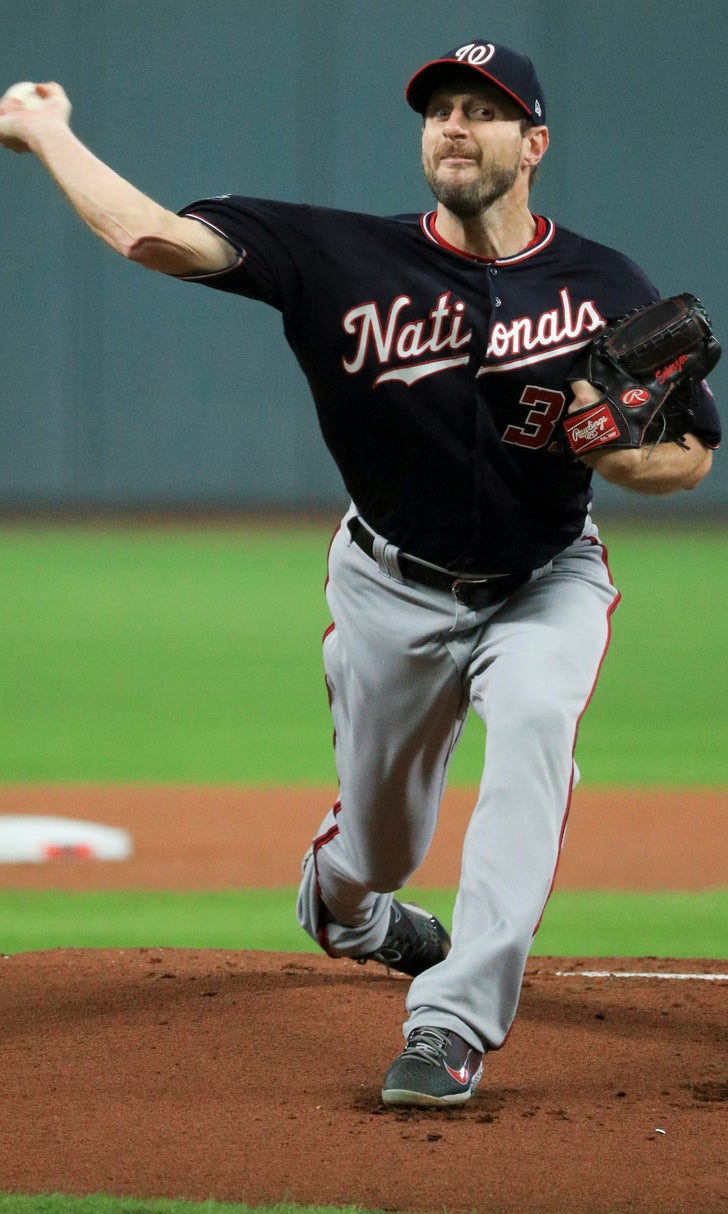 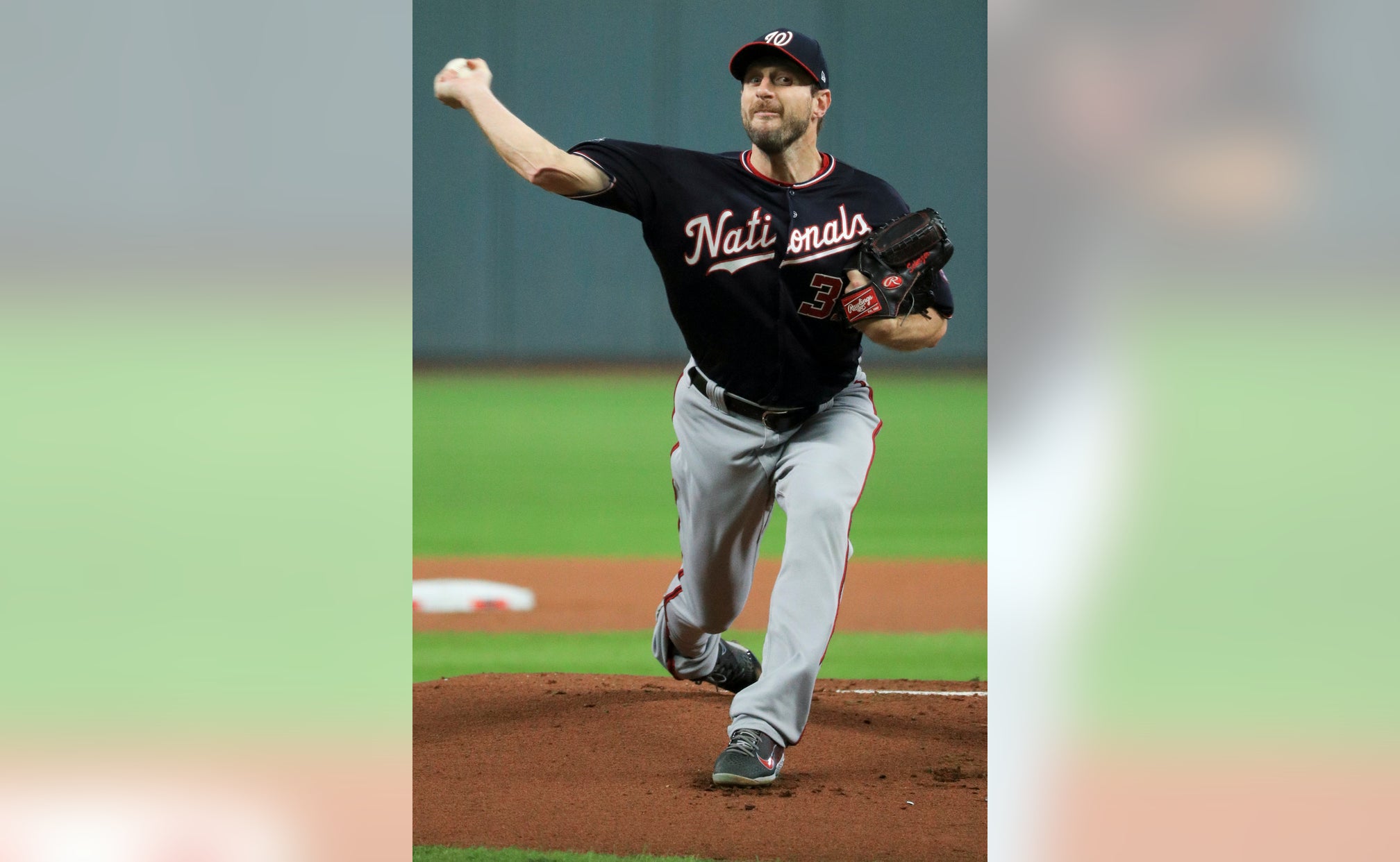 HOUSTON (AP) — Max Scherzer never had a clean inning in Game 7 of the World Series for the Washington Nationals. He finished with more walks than strikeouts and walked off the mound trailing.

Yet, Mad Max delivered in the clutch for the Nationals even without getting the win.

Boosted by a cortisone injection and the adrenaline of trying to get his first World Series ring, Scherzer labored through five innings while throwing 103 pitches. The three-time Cy Young winner gave up seven hits and four walks, yet allowed only two runs.

Three days after being unable to make his scheduled start at home in Game 5, when he could barely move his right arm because of an irritated nerve near his neck, Scherzer is finally a World Series champion.

The Nationals rallied late — their record fifth comeback win in a potential elimination game this postseason — to beat the Astros 6-2 in a World Series where the visiting team won every game.

While Scherzer never looked dominating, the incredibly intense right-hander still was throwing fastballs in the mid-90s throughout his five innings. All but one of the Astros hits against him were singles and only one runner outside the two that scored reached third base. Houston managed only a 2-0 lead before Patrick Corbin relieved Scherzer to start the sixth, then threw three scoreless innings for the victory.

"For him to grind out those five innings, absolutely kept us in the ballgame, gave us a chance to win. It was gutsy," reliever Sean Doolittle said. "It wasn't his most probably overpowering performance, but it was one of his most gutsy and he willed us to stay in the game. ... I know guys fed off of that effort for sure."

Despite plenty of hard-hit balls, the Astros left nine runners on base against Scherzer while going 1 for 8 with runners in scoring position. That kept the Nationals close enough to surge ahead late.

Scherzer knew he was getting better once he made it through the flight to Houston, then had another round of treatment at the hotel.

"I was like, 'Man, I'm feeling pretty good.' Waking up for Game 6, that morning I was moving my head around even better," he said. "I could tell the cortisone was working. That was the movement I knew, 'OK we're on the path to get to Game 7.'"

Scherzer finished this postseason 3-0 with a 2.40 ERA. He had 37 strikeouts and 15 walks over 30 innings in six games, five of them starts.

Washington finally got to Astros starter Zack Greinke in the seventh when Anthony Rendon hit a one-out solo homer. Two batters later, after a pitching change, Howie Kendrick made it 3-2 with his two-run shot that ricocheted off the right field pole.

Yuli Gurriel led off the Houston second with a solo homer, which was followed by well-struck singles by Yordan Alvarez and Carlos Correa — both had exit velocity over 104 mph. But they were stranded out after a popped-out bunt, a grounder and a liner.

The Astros had two more runners on with one out an inning later before consecutive flyouts by Gurriel and Alvarez.

"We got a lot of traffic, but we also know how incredible he is,' said Astros cleanup hitter Alex Bregman, who had a walk but was 0 for 2 with runners on base. "He was a warrior coming back from being hurt. He pitched his tail off."

Scherzer's first strikeout didn't come until facing his 17th batter, when he got Robinson Chirinos for the second out in the fourth before Houston stranded two more runners.

Correa's RBI single in the fifth, a slicing two-out hit off a diving Rendon, made it 2-0 before Scherzer struck out Chirinos again for his final out.

"I never felt like the situation of the game was going to wear me down," Scherzer said. "I knew the situation, even though I was giving up some runs and Greinke was throwing the ball well that our team was still going to fight. I took it as far as I could."

Scherzer threw 58 of his 103 pitches for strikes, the 56% strike ratio his lowest this season. With four walks and three strikeouts, he ended a streak of 257 consecutive starts (regular season and postseason) without more walks than strikeouts. STATS said that was the longest such streak by any pitcher since 1920.

For all that irritation, he finally gets a ring.