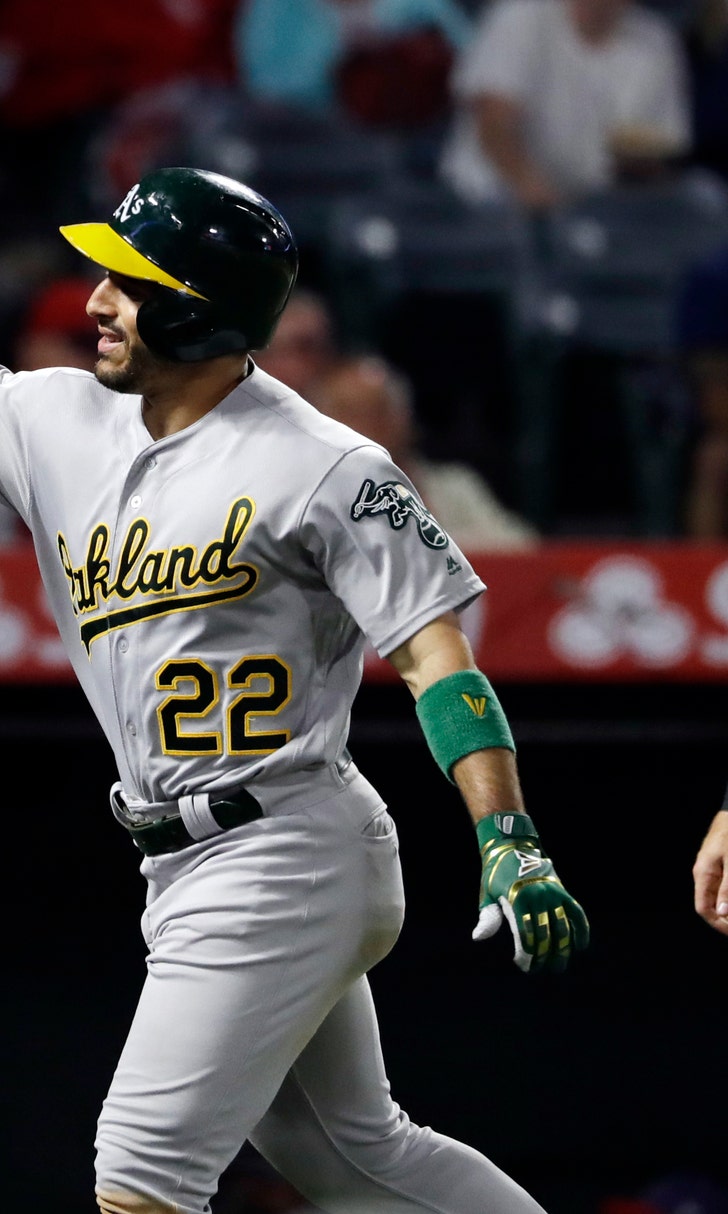 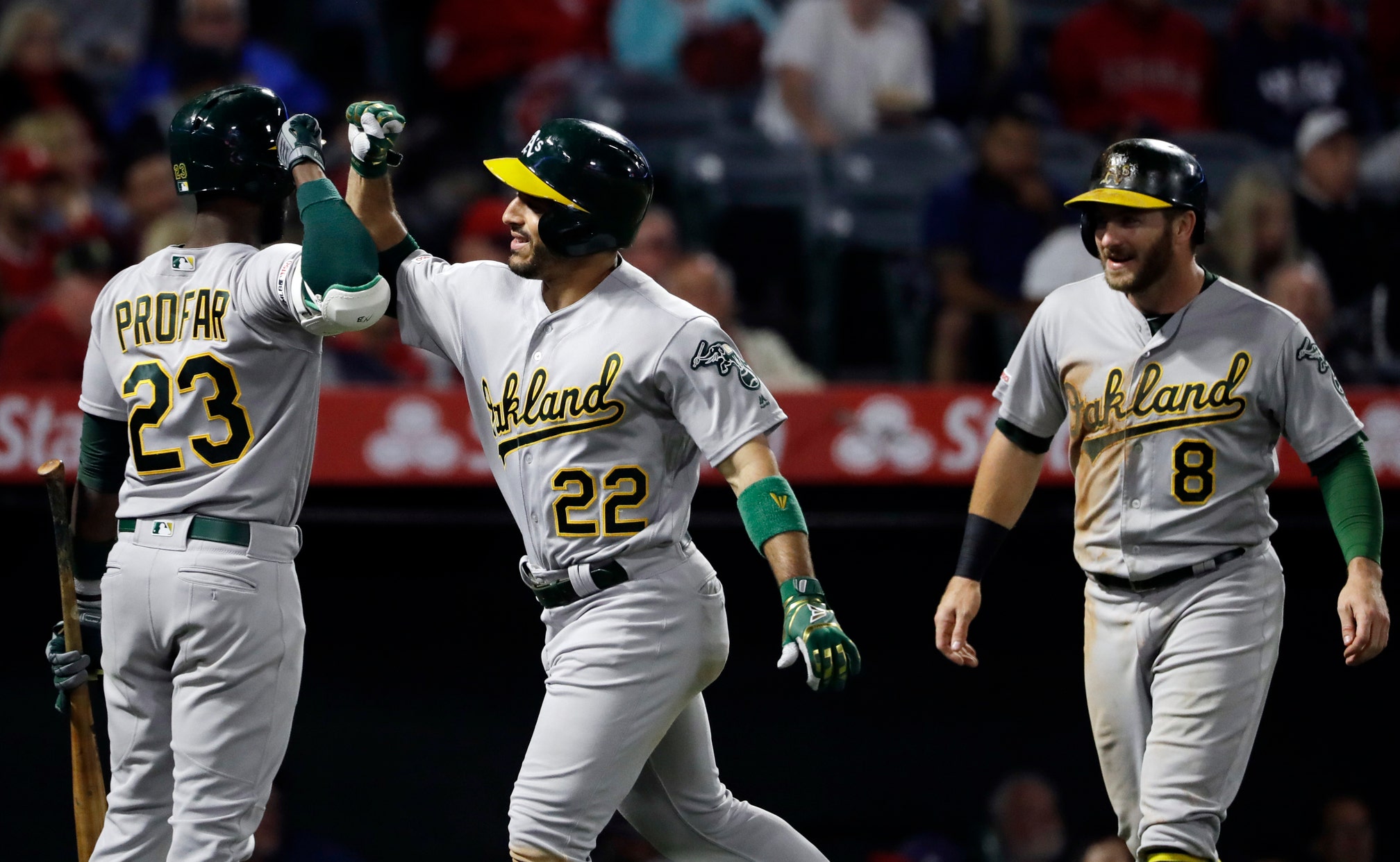 ANAHEIM, Calif. (AP) — Ramón Laureano has been known primarily for his defense, but the Oakland center fielder is starting to become an offensive presence.

"I want to be known as an all-around player," said Laureano, who has the majors' longest active hitting streak and the longest in the American League this season. "I feel good. I am trusting my instincts instead of guessing what pitches are coming."

Laureano is batting .365 (23 of 63) during the streak. He extended it with a double in the fourth inning and then hit his eighth home run of the season — a two-run shot to left off Griffin Canning (2-2) — to extend Oakland's lead to 4-0 in the sixth.

"It was a good game for us. We got some big hits at certain times and got great pitching during the game," Oakland manager Bob Melvin said.

Frankie Montas, who is sixth in the AL with a 2.83 ERA, allowed two runs on four hits to improve to 7-2. His only mistakes came in the sixth inning when he hit Mike Trout with a splitter on the 13th pitch of the at-bat. Shohei Ohtani followed with a two-run drive to center for his fourth of the year. It was the first time in the right-hander's last nine starts and 53 1/3 innings that Montas surrendered a home run.

"He's a tough hitter. I wish I could have struck him out," Montas said of Trout. "I was a little tired. I thought I missed a pitch a time or two."

Canning, who was facing an opponent for the second time in his major-league career, gave up four runs on seven hits in six innings. The right-hander struck out eight, making him the fourth rookie AL pitcher to strike out five or more in each of his first seven starts. He joins Masahiro Tanaka (11), Herb Score (10) and Orlando "El Duque" Hernandez (nine).

"All their guys can obviously do some damage. It's kind of just a fine line of being aggressive, but at the same time not laying pitches in there," Canning said. "My slider was better. I threw a couple good changeups. Fastball command was a little bit better."

The four hits by the Angels is a season low at home and the ninth time this season they have been held to four or fewer. Three have been against Oakland. Blake Treinen retired the side in the ninth for his 12th save.

"Mike's at-bat was outstanding. I think Montas was getting a little bit frustrated trying to get him out. Maybe in theory he wore him down for Ohtani. But really that was the only offense we were able to muster tonight," Los Angeles manager Brad Ausmus said.

Oakland opened the scoring with a pair of runs in the third. Matt Chapman got aboard with a single, advanced to second on Matt Olson's walk and scored on Khris Davis' double to center. Stephen Piscotty's sacrifice fly to right drove in Olson.

The Angels were happy to return home, but it was their third straight game in a different city. They traveled 3,462 miles, which is third-most by a team in a three-day span in MLB history.

Los Angeles won 13-3 at Seattle on Sunday but had to travel to Chicago on Monday for a makeup game against the Cubs, which it dropped 8-1.

Robbie Grossman also had two hits for Oakland, continuing his strong play against division opponents. The left fielder is batting .299 (23 for 77) against the AL West compared to .170 (15 for 88) against all other teams.

Athletics: LHP Sean Manaea (left shoulder) threw 15 pitches during batting practice in Stockton. Manager Bob Melvin said Manaea came out of the session healthy and they will look to increase the number of pitches the next time out.

Angels: C Kevan Smith (concussion) caught a bullpen session and took batting practice. ... SS Zach Cozart (left shoulder inflammation) said he is still experiencing tightness, which hasn't allowed him to get full extension on his swing. There isn't a timetable for him to resume batting practice and Cozart said he is talking with the hitting coaches about possibly changing his swing.

Athletics: RHP Daniel Mengden (1-1, 3.05 ERA) is 0-2 in five career appearances, including three starts, against the Angels.