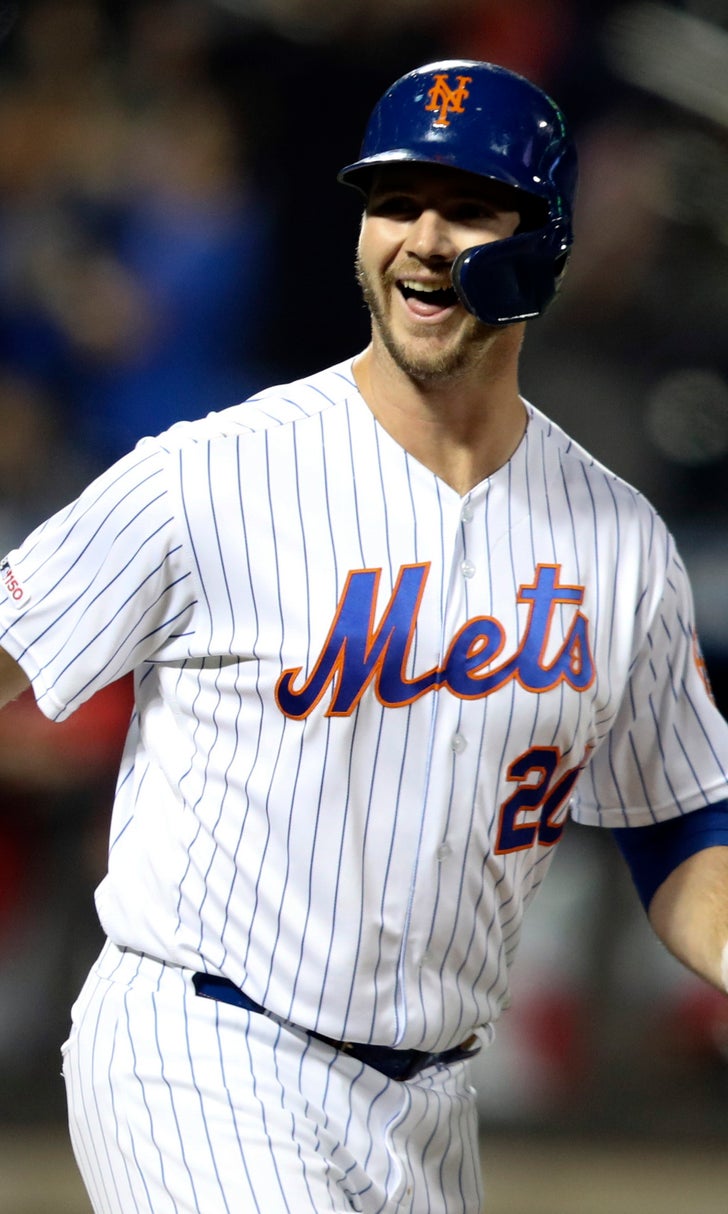 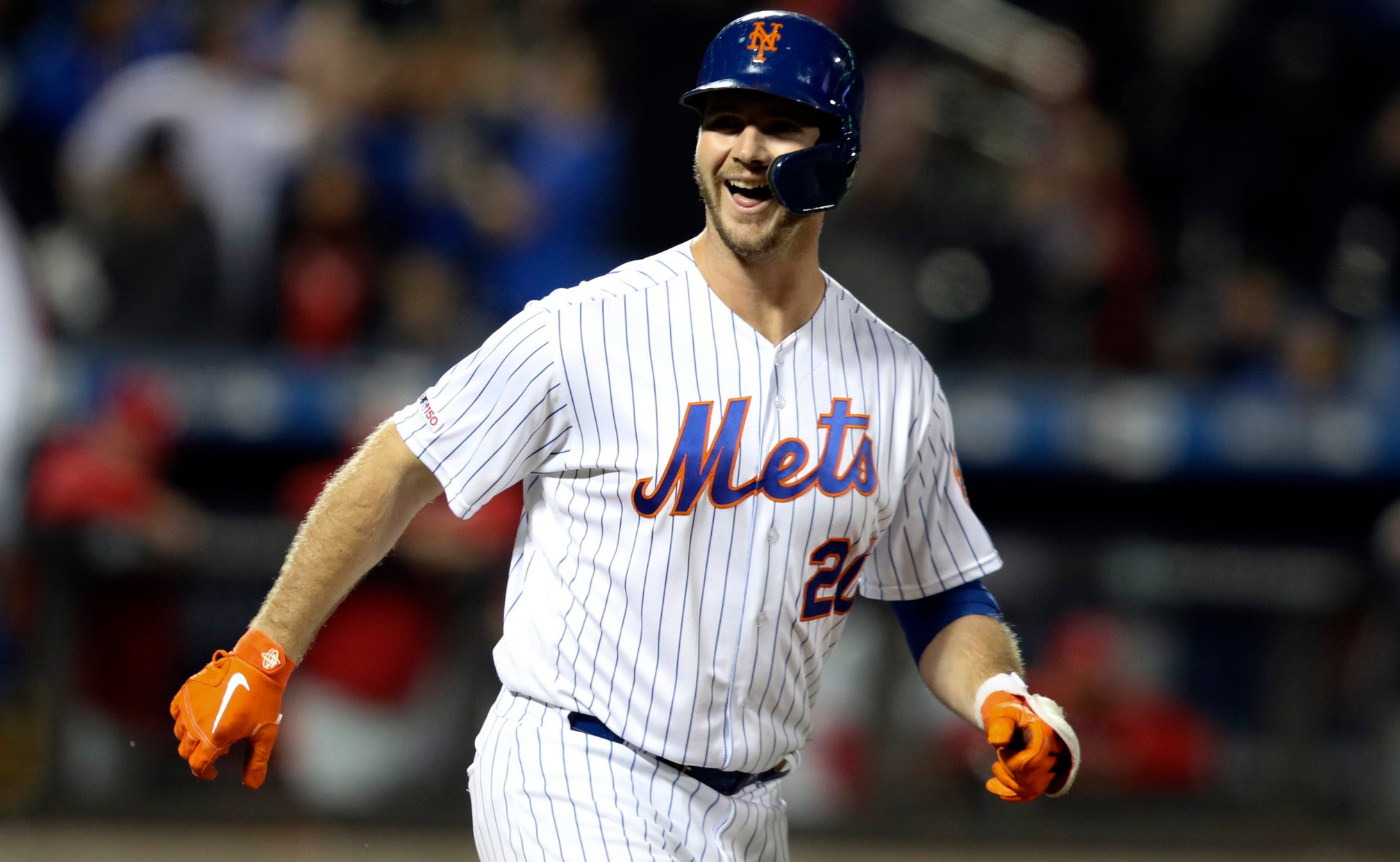 NEW YORK (AP) — Pete Alonso walked up and down the New York Mets' dugout in the ninth inning declaring he wanted somebody's shirt.

In the end, everybody got his shirt.

Alonso drew a bases-loaded walk with two outs to cap a chaotic ninth inning and lift the Mets to a 5-4 win over the Philadelphia Phillies that tightened the National League wild card race.

"He was saying in the ninth inning that he wanted somebody's shirt," said Michael Conforto, who was the first Mets player to have his uniform ripped off by Alonso during an on-field celebration on Aug. 9 following a winning walkoff single that beat Washington.

"And then he ended up being the guy."

Alonso had an RBI single in the eighth to give the Mets a 3-2 lead. Wilson Ramos added a two-out RBI single to provide a run that turned out to be valuable in the ninth, when embattled closer Edwin Diaz (2-7) gave up a two-run homer to J.T. Realmuto.

The appearance was the first for Diaz since Tuesday, when he allowed a walk-off three-run homer to allow the Nationals to complete a seven-run ninth inning in their 11-10 win.

Mike Morin (1-2) retired the first two batters in the bottom of the ninth before Juan Lagares singled to left-center. Lagares went to third when J.D. Davis — whose shirt was torn off by Alonso following a walk-off single against Cleveland on Aug. 21 — pinch-hit for Diaz and singled on a full-count pitch.

Nick Vincent then plunked Jeff McNeil with an 0-2 pitch to load the bases. Alonso got ahead 2-0 against Vincent, who evened the count before issuing ball three.

Vincent's final pitch was up and well out of the strike zone. Alonso tossed his bat and trotted to first, where he was engulfed by teammates and eventually had his jersey ripped off.

"I honestly couldn't tell, I was getting seeds and Gatorade dumped on me," Alonso said when asked who ripped his jersey off. "So I've got to watch the video on that one.

The Mets (72-68) moved into a tie with the Phillies. Both teams are four games behind the Chicago Cubs for the NL's second wild card.

The Phillies have lost three straight, the last two by walk-off.

"We're staying in the game but we're just not quite finishing it when we need to," Realmuto said. "That's a good club over there. They're in the same spot we are. They were able to get it done tonight and we weren't."

The Phillies likely dodged potential disaster in the third when right fielder Bryce Harper was hit in the right hand by an up-and-in pitch from Mets starter Steven Matz. Harper remained in the game to run the bases before being replaced by Sean Rodriguez.

The Mets took the lead on McNeil's two-out RBI single in the third and Conforto's leadoff homer in the fourth.

The Phillies tied it on Realmuto's RBI double in the fifth and Maikel Franco's run-scoring single in the sixth.

Todd Frazier reached a milestone when he singled to center for the 1,000th hit of his career. Frazier was congratulated by first base coach Glenn Sherlock as the ball was tossed into the Mets dugout for safekeeping.

Phillies: Harper was diagnosed with a right hand contusion and had the hand wrapped afterward. He said he was uncertain if he'd be able to play Saturday.

Mets: INF Jed Lowrie (knee, calf) went 0 for 4 as the designated hitter for Single-A Brooklyn, which beat Hudson Valley 4-3 to advance to the New York-Penn League finals. It was the 12th rehab game since Aug. 20 for Lowrie, who signed a two-year deal in January but hasn't played in the majors due to a variety of injuries.

Phillies: LHP Drew Smyly (3-6, 6.65 ERA) will look to win back-to-back starts for the first time this season. Smyly has a 4.57 ERA in eight starts since joining the Phillies on July 21.

Mets: RHP Marcus Stroman (7-12, 3.28 ERA) is aiming to earn his second victory for his hometown team. Stroman, who grew up about an hour east of Citi Field, is 1-1 with a 4.55 ERA in six starts since being acquired from the Toronto Blue Jays on July 28.