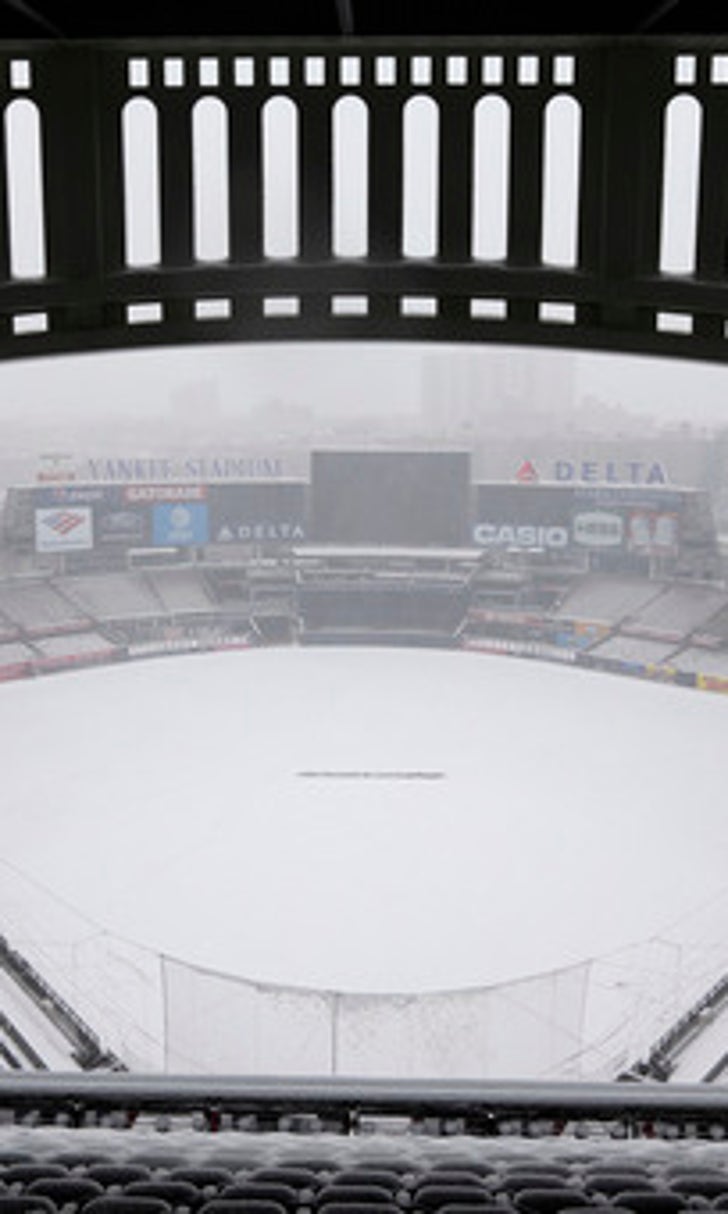 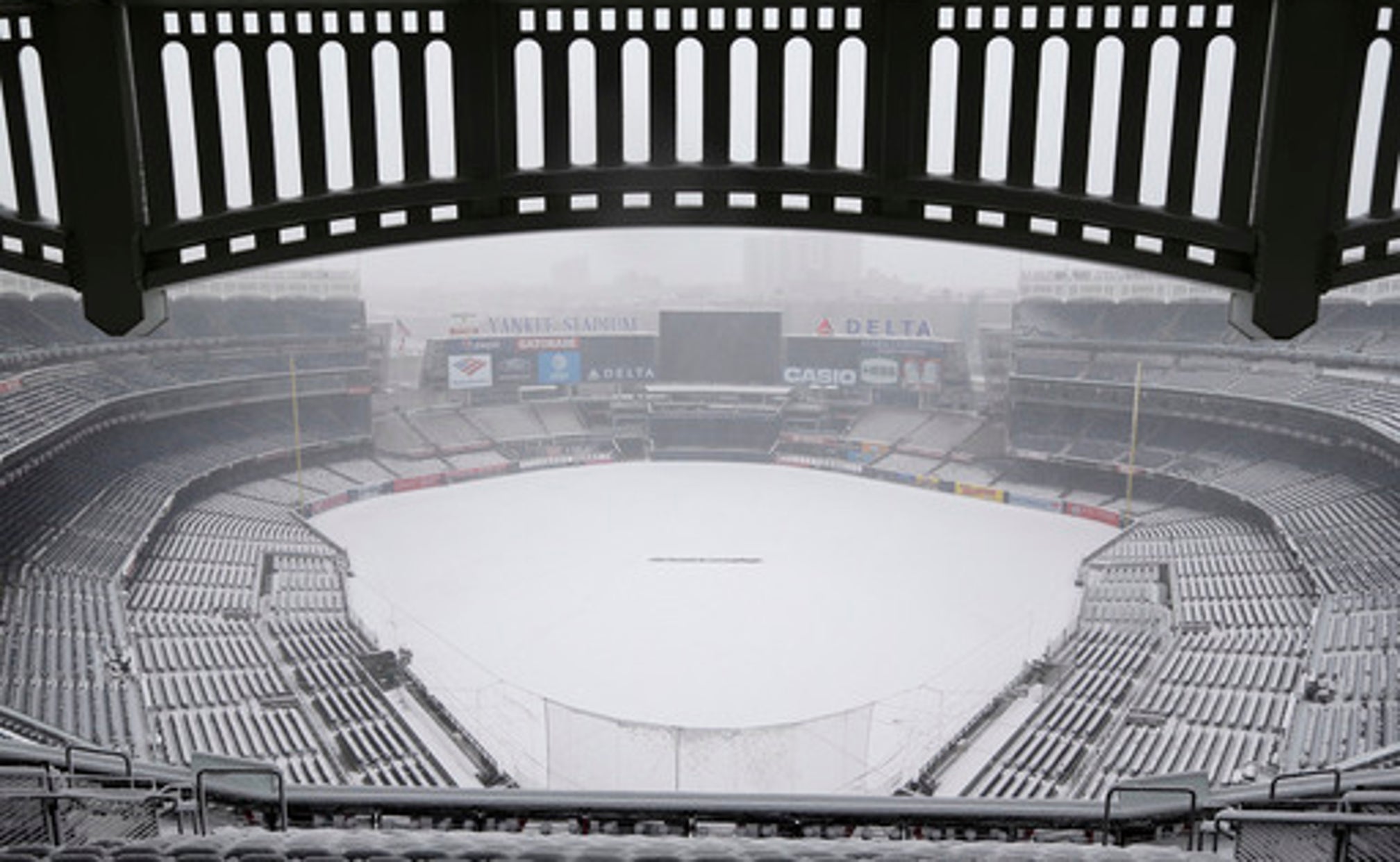 NEW YORK (AP) Aaron Boone's managerial debut was considerably smoother than the first game run by his father Bob, who pulled Kevin Appier with a no-hitter after 6 2/3 innings and 98 pitches in the Kansas City Royals' 1995 opener.

''When I walked out and I heard all the boos from the fans, I wanted to go: Wait a minute. He's got too many pitches and this is the first game out of spring training,'' Bob Boone recalled Monday. ''But they didn't understand. So when I look back on it, I go, that was dumb. That kind of set the tone as to how dumb I was for the rest of my managerial career.''

Aaron Boone won his first two games as the New York Yankees manager, then watched relievers Dellin Betances and David Robertson implode the following two days at Toronto as the Blue Jays rallied for a four-game split. The Yankees returned to New York for their home opener against the Tampa Bay Rays, which was snowed out and rescheduled for Tuesday.

''The first two, it was like, this game's pretty easy. Just snap your fingers and everything falls into place,'' said Bob, now the Washington Nationals vice president of player development. ''And then all of a sudden Betances got in and couldn't throw a strike and couldn't hold the runner, and things kind of went to hell.''

Aaron Boone sent Betances back to the mound for a second inning of relief Saturday. Yangervis Solarte led off the eighth with a tiebreaking homer, and Kevin Pillar singled, then stole second, third and home in a 5-3 win.

New York led 4-1 Sunday before Justin Smoak hit a two-run homer in the seventh against Tommy Kahnle. With runners at second and third with two outs in the eighth, Aaron Boone elected to intentionally walk 2015 AL MVP Josh Donaldson. Smoak hit a grand slam on the ninth pitch of his at-bat against David Robertson.

''I won't be a guy - not because of yesterday - that intentionally walks people a lot,'' Aaron Boone said. ''I'm not a big believer in throwing extra guys on base, but there are important times in the game where I think you have a decision to make. There's a lot of debate on that decision yesterday. I understand. But I felt like we made the best decision. And sometimes it works out, and sometimes it doesn't, and that's sports, and that's baseball.''

The Boones are a three-generation baseball family. Ray, the grandfather of the Yankees manager, was a two-time All-Star infielder from 1948-60. Bob was a four-time All-Star catcher from 1972-90, then managed the Royals from 1995-97 and Cincinnati from 2001-03. Aaron's brother Bret was a three-time All-Star second baseman in a big league career from 1992-05.

Bob has been conferring with Aaron and was in New York for the home opener. They talked about how the Yankees scrambled to deal with injuries to Greg Bird, Jacoby Ellsbury, Aaron Hicks, Billy McKinney and Adam Warren.

''Man, he was giving me so much advice last night on my drive home from the airport,'' Aaron Boone said.

''He's just like: Welcome to managing,'' Aaron added with a chuckle. ''I wouldn't say he's so much a critic. He's opinionated, and he has a lot of thoughts and he's seen a lot in this game, and so he shares with me how he could do things.''

Dad thinks his son quickly will learn the challenges of running a big league club.

Bob agreed with the decision to walk Donaldson.

''I'm laughing about the critics,'' Bob said. ''My answer would have been - have you checked the salaries of these two guys? We've got all the Strat-O-Matic stuff. This guy makes $25 million and this guy makes $1.2 million (actually $23 million and $4,125,000). Who do I want to pitch to? The stats may say one thing, but those numbers on the contracts tell you something.''

The Yankees put up all their retired numbers in silver in a ring around the clubhouse just under the ceiling. The idea was suggested by equipment manager Rob Cucuzza. Giarcarlo Stanton inherited Alex Rodiguez's old stall, used by Matt Holliday last season.

LHP Oliver Perez was signed to a minor league contract. ... RHP Ben Heller's minor league option was voided. The Yankees put him on the 10-day DL retroactive to March 27, because of a bone spur in his pitching elbow.

Yankees: RHP Adam Warren, who left Saturday's game with a bruised right ankle sustained when he was hit by a comebacker, could be available Tuesday.

Rays: Chris Archer starts in place of Austin Pruitt, who won Thursday's opener in relief, and Blake Snell moves up to pitch Wednesday. That puts Tampa Bay on track to possibly have two bullpen days in place of a starter during its four-game weekend series at Boston.

Yankees: No. 5 starter Jordan Montgomery remains the scheduled pitcher for New York, which had considered skipping his turn and starting Luis Severino on Tuesday.

Special Delivery
Clayton Kershaw's postseason reputation may precede him, but the Dodgers star is setting the stage to flip the script.
2 days ago
those were the latest stories
Want to see more?
View All Stories
Fox Sports™ and © 2020 Fox Media LLC and Fox Sports Interactive Media, LLC. All rights reserved. Use of this website (including any and all parts and components) constitutes your acceptance of these Terms of Use and Updated Privacy Policy. Advertising Choices. Do Not Sell my Personal Info