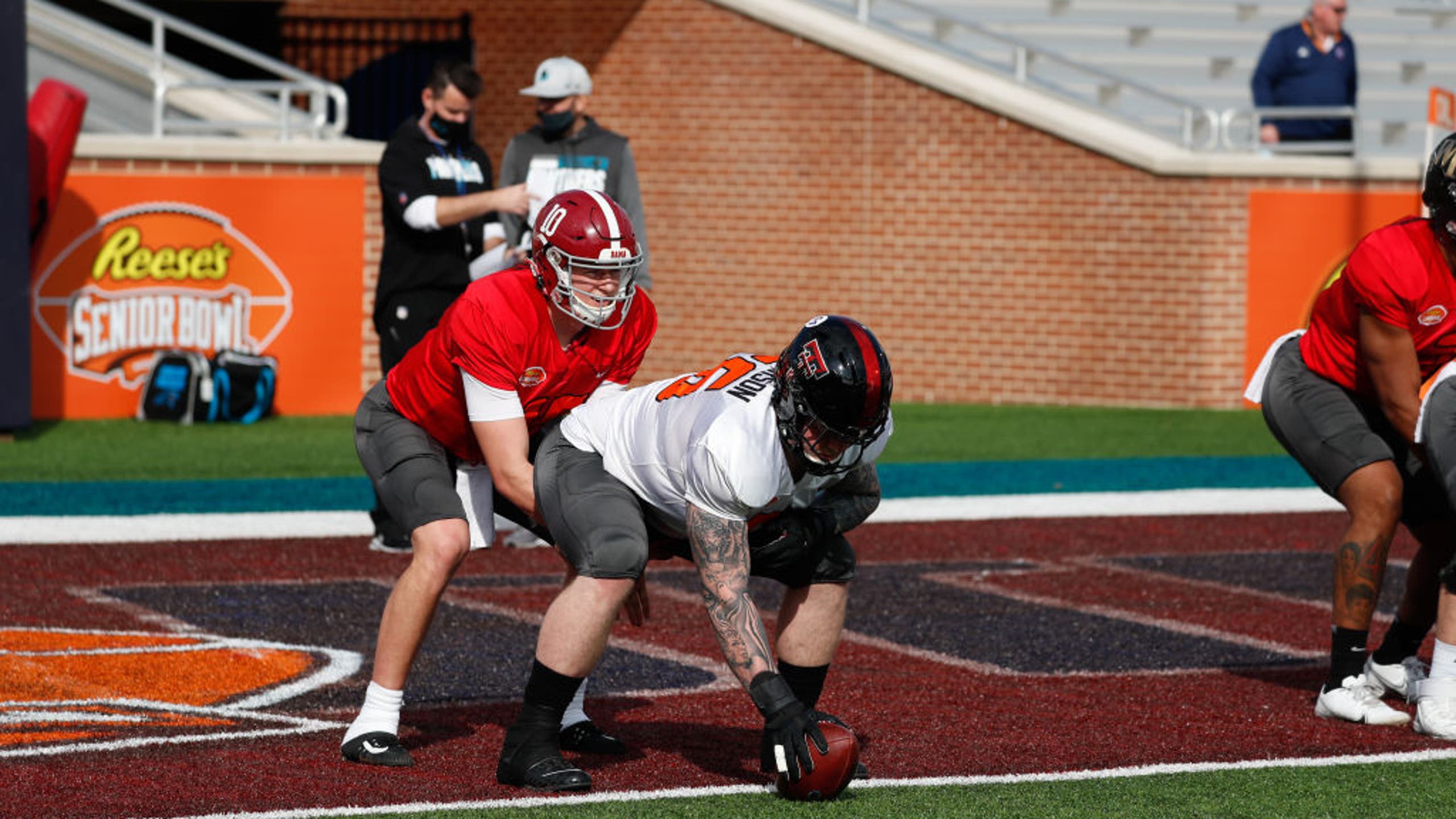 The 2021 Senior Bowl was arguably the most important in the event's 72-year history.

Like he did all season, former Alabama quarterback Mac Jones took advantage of the opportunity in front of him, shining during the week despite not playing Saturday in this all-star game in this odd year.

Carolina Panthers coach Matt Rhule was clear earlier in the week about why this Senior Bowl carried so much added importance: Information on players is at its most precious.

With no NFL Scouting Combine in Indianapolis, restrictions on travel and little to no face time (but lots of FaceTime), it pays — millions of dollars — for this class of seniors to make like the O’Jays and come out and play.

"This would be a year when everyone across the NFL knows less about players than any other year," Rhule said. "We think we know these guys, and our scouts do a great job, but that's only information from a third party. This is a chance for players to speak for themselves and say, 'This is who I am. This is what my makeup is.'"

Rhule and his staff, along with Miami Dolphins coach Brian Flores and his assistants, enjoyed a unique opportunity no one else in the NFL can claim. They got to coach the players, provide hands-on training and understand how each of these prospects responds to an entire week of instruction in Mobile, Alabama.

Rubbing shoulders and small-talking with players is one of the most important evaluation tools coaches and scouts possess, and those chance encounters can shape a career.

"There was a player last year, and I won't say who, but [he] was supposed to be drafted pretty highly," Rhule said. "And I got in the elevator with him at the combine, and by the end of that elevator ride, I was like, 'There's no way that guy will be a fit with us.'"

For some, such as South Dakota State wide receiver Cade Johnson and Wisconsin-Whitewater offensive lineman Quinn Meinerz, these three days of practice and a chance to feature in the Senior Bowl offer the best chance they'll have to stand out among a who’s who of college football’s graduating seniors.

For others such as Jones, it’s a chance to separate from a crowded group of talented quarterbacks in a year when up to 10 teams could be in the market for a QB in the first half of April’s NFL Draft.

Jones did not play in the game after spraining his ankle earlier in the week, but he managed to increase his stock by making himself available.

His work during the week was recognized by players and coaches alike: In a vote by the secondary, he was named the top quarterback on the American team.

"I don’t think I needed to prove anything," Jones said after Thursday’s practice. "The tape is the tape, and I did what I did. And obviously I had a great team, but I just wanted to come and kind of learn more about NFL football and learn a new playbook, which I’ve done a good job with."

These impressions matter, and they’ll certainly matter more to some players who received invitations to participate and those who decided against showing up, such as former Florida quarterback Kyle Trask.

Trask, who initially accepted his invitation to the game in November, withdrew from the weeklong event at the last minute because of an ankle injury.

Trask was one of only two 4,000-yard passers with 40 passing TDs in the country, and he was a finalist for the Heisman Trophy.

His last game as a collegian was his worst as a starting quarterback, though. With Florida undermanned in the Cotton Bowl, Trask completed just 16 of 28 passes for 158 yards against Oklahoma as the Gators lost 55-20.

Trask's three interceptions at AT&T Stadium were the most he’d thrown in a single game. This after he threw just five interceptions in his previous 13 games dating to the 2019 season.

In giving up his spot, Trask made way for Jones, against whom he is being evaluated.

Jones put on a virtuoso performance in the national title game, completing 36 of 45 pass attempts for 464 yards with five TDs in the Crimson Tide’s 52-24 shellacking of No. 3 Ohio State. Jones set the NCAA record for passer rating in a season, with 203.1, and was surging on mock draft boards. 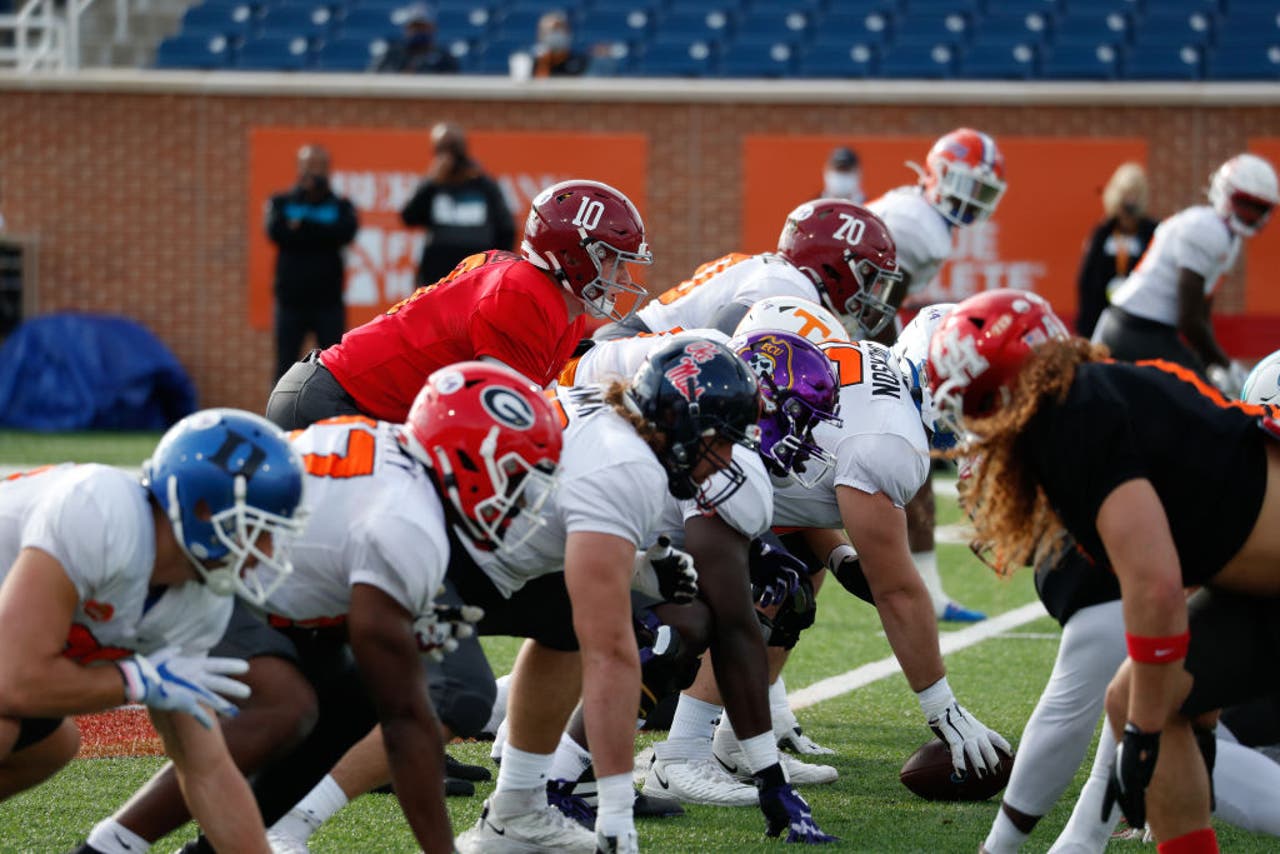 Mac Jones was named the top quarterback on the American team for his performance in practices during the week.

Just days after winning the national title, Jones became the fifth player on that roster to elect to participate in Senior Bowl week – even though it came just a couple of weeks after the College Football Playoff National Championship. Heisman Trophy winner DeVonta Smith, Doak Walker Award winner Najee Harris and Outland Trophy winner Alex Leatherwood — all linchpins on Nick Saban’s team — each saw the value of going through meetings, getting to know NFL verbiage and learning what pro coaches will expect from them.

With most in agreement that Trevor Lawrence, Justin Fields, Trey Lance and Zach Wilson make up the first tier of QBs likely to be selected in the draft, Trask might have benefited from being seen, heard and evaluated mentally by NFL coaches. It bears noting that the Dolphins and Panthers each hold a pick among the top eight.

Jones took advantage of the opportunities, and Rhule raved about the Tide QB during the week of practices.

"The thing about Mac right off the bat is he’s a gamer," Rhule said. "He’s got a great presence about him. He loves the moment, loves the competition. So there’s not much doubt that he has that quarterback swagger that you can feel when you’re on the field."

"Mac Jones could not have had a better day than he did today at Senior Bowl practice," he said. "Total command of every play he participated in and threw the ball with exceptional accuracy."

Neither Jones nor Trask was expected to be a starting quarterback at an SEC school. Trask needed Florida to take a flyer on him after a high school career spent backing up 2021 Heisman candidate D’Eriq King.

Jones joined a 2017 Tide recruiting class headlined by Tua Tagovailoa, only to have some people question whether he’d lose his starting job as a senior to a true freshman. He responded like he did at Senior Bowl practice: by separating.

Like Trask, Jones put together a Heisman finalist season with 4,500 passing yards, throwing 41 TDs to just four interceptions. His practice performance during the Senior Bowl served to further demonstrate that he is as advertised and that he wants to play.

There’s no better way to show that than to show up.

'Michigan State was a whole new world'
In our series of Black History Month Stories, RJ Young looks at how Michigan State championed integration and changed college football.
1 day ago

Gus Johnson wins Jake Wade Award
FOX Sports announcer Gus Johnson is the winner of a prestigious award for "outstanding contributions" in the media to college sports.
4 days ago
those were the latest stories
Want to see more?
View All Stories
Fox Sports™ and © 2021 Fox Media LLC and Fox Sports Interactive Media, LLC. All rights reserved. Use of this website (including any and all parts and components) constitutes your acceptance of these Terms of Use and Updated Privacy Policy. Advertising Choices. Do Not Sell my Personal Info