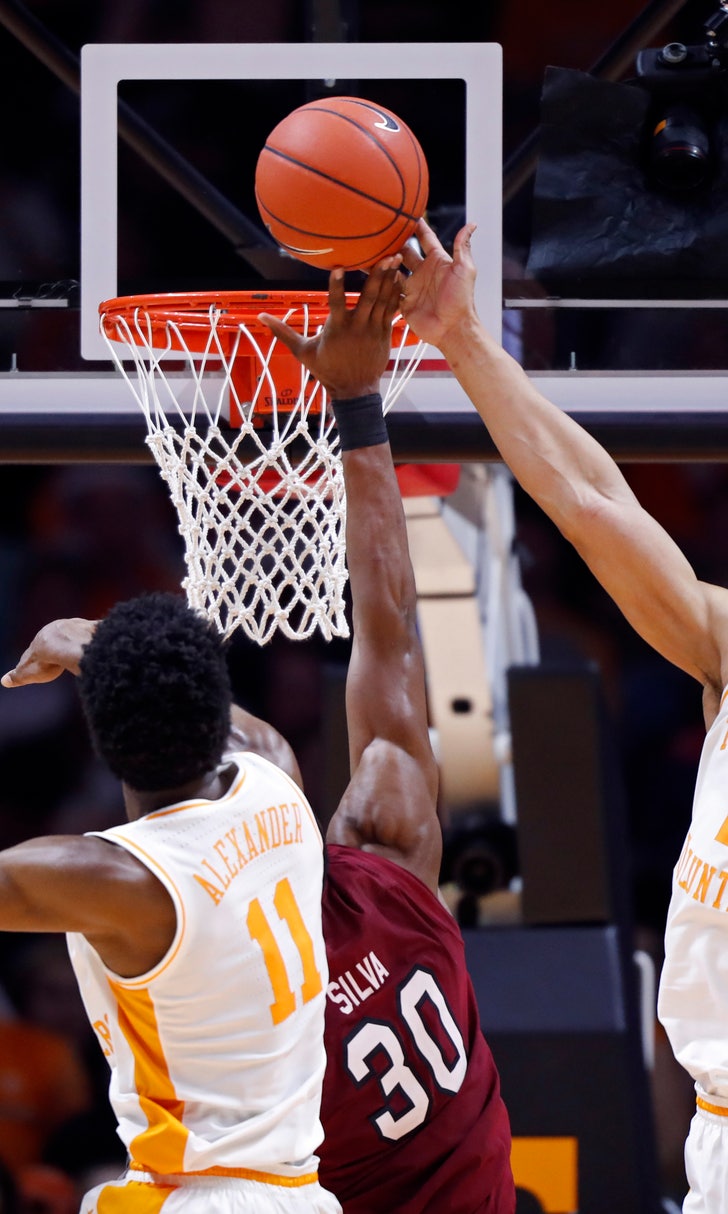 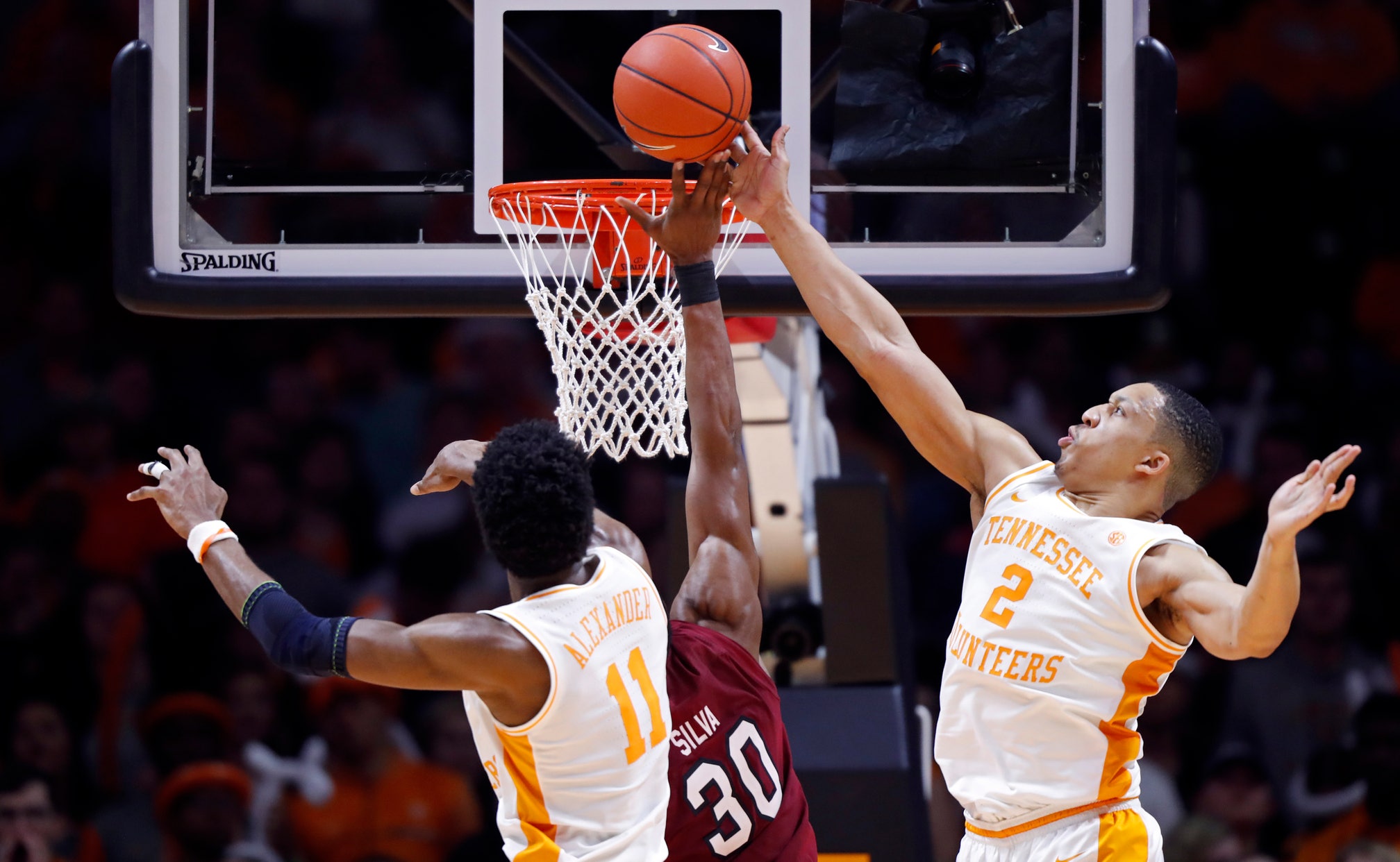 KNOXVILLE, Tenn. (AP) — South Carolina couldn't miss from 3-point range and still couldn't put up much of a challenge against No. 1 Tennessee.

Admiral Schofield had 21 points and 10 rebounds as the top-ranked Volunteers defeated South Carolina 85-73 on Wednesday for their school-record 19th consecutive victory. South Carolina (12-12, 7-4 SEC) made a season-high 14 3-point baskets and shot 60.9 percent from beyond the arc, but still trailed by double digits throughout the last 28½ minutes.

"It's a game at the end of the day, and they're going to make shots and we're going to make shots," Schofield said. "It's just we've got to eliminate as many opportunities for them to score as we can, and that's our job. That's what defense is, just trying to steal possessions away from them and create more for ourselves, especially on the offensive glass."

Tennessee (23-1) owns the longest active winning streak of any active Division I team and is 11-0 in Southeastern Conference competition for the first time in school history.

The Vols' high-powered offense assured that Tennessee would keep its winning streak going. Tennessee shot 9 of 20 from 3-point range and had five players score in double figures.

"We've got to get tougher," South Carolina coach Frank Martin said. "It hurts my soul that we're not a tougher team. That goes against everything I stand for, but those are the kids we've got. They're trying real hard. I'm real proud of them and we've got to keep working to get better there."

On a night when both teams were on fire from beyond the 3-point arc, Tennessee's superior accuracy from shorter range made the difference. Tennessee was 25 of 49, while South Carolina was just 12 of 40 on 2-pointers.

"That's all fine and dandy," South Carolina's Hassani Gravett said of the Gamecocks' 3-point accuracy, "but you've got to get stops. You can't keep trading buckets with a team like this."

Tennessee took command by going on a 26-6 run that turned a 15-12 deficit into a 38-21 advantage. The score was tied 15-all when Jalen Johnson hit a 3-pointer while getting fouled to start a four-point play that put Tennessee ahead for good.

The Vols reeled off 14 straight points later in that 26-6 stretch. The 14-0 spurt featured two dunks by Alexander and 3-pointers from Bowden and Schofield.

South Carolina: The Gamecocks haven't figured out a way to slow down Tennessee's offense. Tennessee shot 56.3 percent in a 92-70 victory at South Carolina on Jan. 29. In Wednesday's rematch, Tennessee shot 49.3 percent and dipped below the 50-percent mark only by missing eight of its last nine attempts.

Tennessee: The Vols are about to enter the toughest stretch of their schedule. Three of their next four games are away from home, including road dates with No. 5 Kentucky and No. 19 LSU each of the next two Saturdays. Tennessee hasn't faced a ranked team since a Dec. 9 victory over No. 3 Gonzaga, which was ranked No. 1 at the time.

"There's a lot of basketball left to be played," Tennessee coach Rick Barnes said. "I know we've got Kentucky next, but I also know that we have to start out with what did we not do well tonight, and what do we have to do to try to fix that before we can even talk about Kentucky."

South Carolina was playing its first game since losing reserve guard Evan Hinson, who also plays tight end on the Gamecocks' football team. Hinson had been averaging 9.5 minutes per game off the bench before leaving the basketball team this week to focus on football.

Tennessee welcomed back reserve swingman Yves Pons from a one-game absence after he injured his face while colliding with a teammate in practice last week. Pons wore a clear mask and played just three minutes.

The Gamecocks said after the game this Tennessee team reminds them of their South Carolina squad that reached the Final Four two seasons ago.

"It's the discipline and the fight they have," Gravett said.

Tennessee: At No. 5 Kentucky on Saturday.