For the first time in 17 years, LeBron’s title window is no longer wide open

Have you noticed all the chatter?

LeBron James needs the Lakers as much as they need him. @ColinCowherd explains: pic.twitter.com/y1t2Y5HeBL

This isn’t the old LeBron – it’s just an older LeBron.

This version of the King needs help.

"I don't believe one ounce of it. Trade deadline came and went and LeBron wants to save face. They didn't get the guy in Marcus Morris."

—@RobParkerFS1 on report that LeBron's connection w/Lakers front office is best of his career pic.twitter.com/So024MpYEt

And after not getting that extra bit of help at the NBA trade deadline, the pressure is once again on LeBron to deliver a title for a team with presumably not enough championship pieces.

However, James isn’t getting any younger. And if the Lakers don’t win a title this year, the future looks bleak.

"I think the No. 1 seed matters. For the Lakers to keep the No. 1 seed, LeBron is going to have to play 37-38 minutes a night down the stretch. … You'll see a better version of the Lakers in a few weeks." — @getnickwright pic.twitter.com/mVycVHfx7C

Los Angeles still has the best record in the Western Conference and arguably two of the top three players in the West.

But after James and Anthony Davis, there is a dropoff.

"The Clippers are a better team. The Lakers are too LeBron-centric. It's not LeBron's fault, it's his greatness, but he's got to create for everybody. The Clippers have two stars, but the ball finds everybody." — @Chris_Broussard pic.twitter.com/fitl81WsDD

If you compare the Lakers’ roster to the in-town rival Los Angeles Clippers, there is no comparison, especially after the trade deadline.

The Clippers landed Marcus Morris, who had been targeted by the Lakers in trade talks.

They gotta dog in Hollyhood @LAClippers let’s gets it pic.twitter.com/lQ760kdPxm

Morris is a dog, indeed, and he added depth to an already-deep Clippers roster, featuring Kawhi Leonard, Paul George, Lou Williams, Montrezl Harrell, Landry Shamet and Patrick Beverley, among others.

"It does hurt the Lakers because the Clippers got Marcus Morris. I think the Clippers are better… Marcus Morris is a 44% 3-point shooter, he can guard the post and he's a dog." — @Chris_Broussard pic.twitter.com/R537Uj7zyz

Now, back to the Lakers.

"The Lakers need another ball handler. … I still think this team can win a title, but it is going to be all on the shoulders of LeBron James come the playoffs b/c they have no one else they trust handling the ball or initiating the offense." — @getnickwright pic.twitter.com/YLFb8GXfoT

This season, LeBron has served as the dedicated point guard for the first time in his career, and he’s excelled, dishing out a league-leading 10.8 assists per game.

⬇️🔟¢ @KingJames has been dropping dimes this season! pic.twitter.com/TeKlIKHceZ

Still, at the trade deadline, the Lakers aggressively attempted to un-retire a retired point guard.

Darren Collison is sitting with Jeanie Buss at the Lakers game tonight. pic.twitter.com/DqUibRc44u

It didn’t come to fruition.

Veteran guard Darren Collison has decided that he won’t return to the NBA this season and plans to stay retired, league sources tell ESPN. Lakers and Clippers had been courting him, but Collison has informed teams that the timing isn’t right for him.

Lakers expected to have an "exploratory conversation" with Dion Waiters in the near future, per @wojespn

The question is, why did the Lakers even need another piece? In years past, LeBron, coupled with a talent like Davis, would be enough to beat any team in the league – handily.

But LeBron – in his 17th season – isn’t the same guy that can carry a ragtag group of guys to the NBA Finals. 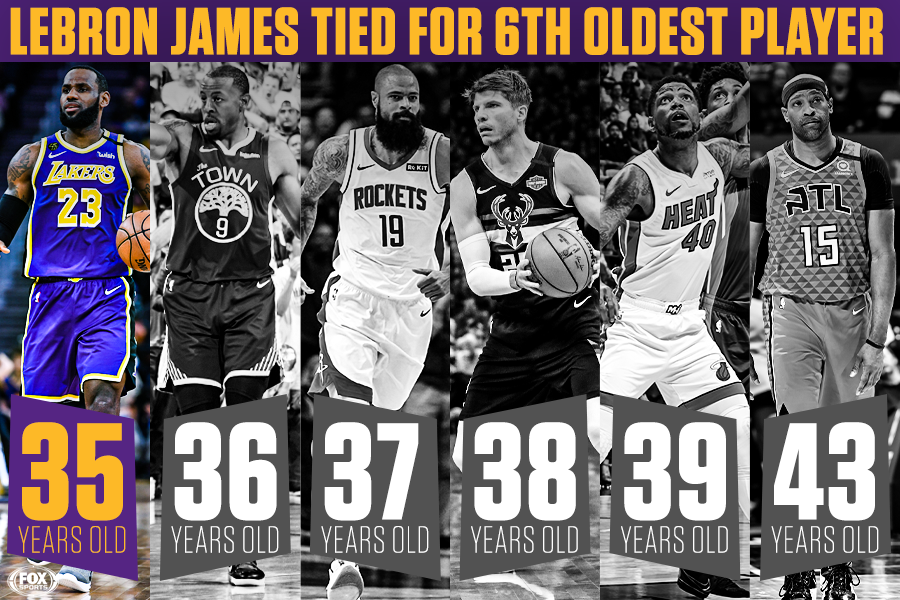 That’s right: Only five players in the NBA are currently older than James.

"LeBron is like many superstars who put everything into their craft. They want everybody else doing the same thing. If he feels like the front office is all in on trying to win, he's not going to complain."@Chris_Broussard on LeBron's connection with the Lakers front office pic.twitter.com/YHQ7y1WqGS

He certainly puts everything into his craft.

But Father Time is un– you know the rest.

Tim Duncan won a title at 38, but he wasn’t the driving force. Kawhi Leonard won NBA Finals MVP that season.

LeBron is, and always has been, great.

But what happens when great is no longer good enough?

FOX Bet has the Lakers favored to win the NBA title, and if the betting public is correct, James will make history this season.

But if it’s incorrect, his title window might be history.