His on-court game was lethal. For Kobe Bryant, however, words were as dangerous a weapon as any move he ever pulled on the court.

In 20 years with the Lakers, Bryant has had some amazing quotes aimed at coaches, teammates, opponents, the general concept of basketball, and … bees, believe it or not.

We went through page after page of Bryant transcripts and mined our 20 favorite quips, quotes and responses — with a tip of the hat to FOX Sports’ own Dan Carson, who took some of the very best and turned them into "inspirational" Kobe posters. Enjoy:

And with that, one of basketball’s most legendary careers got its start. 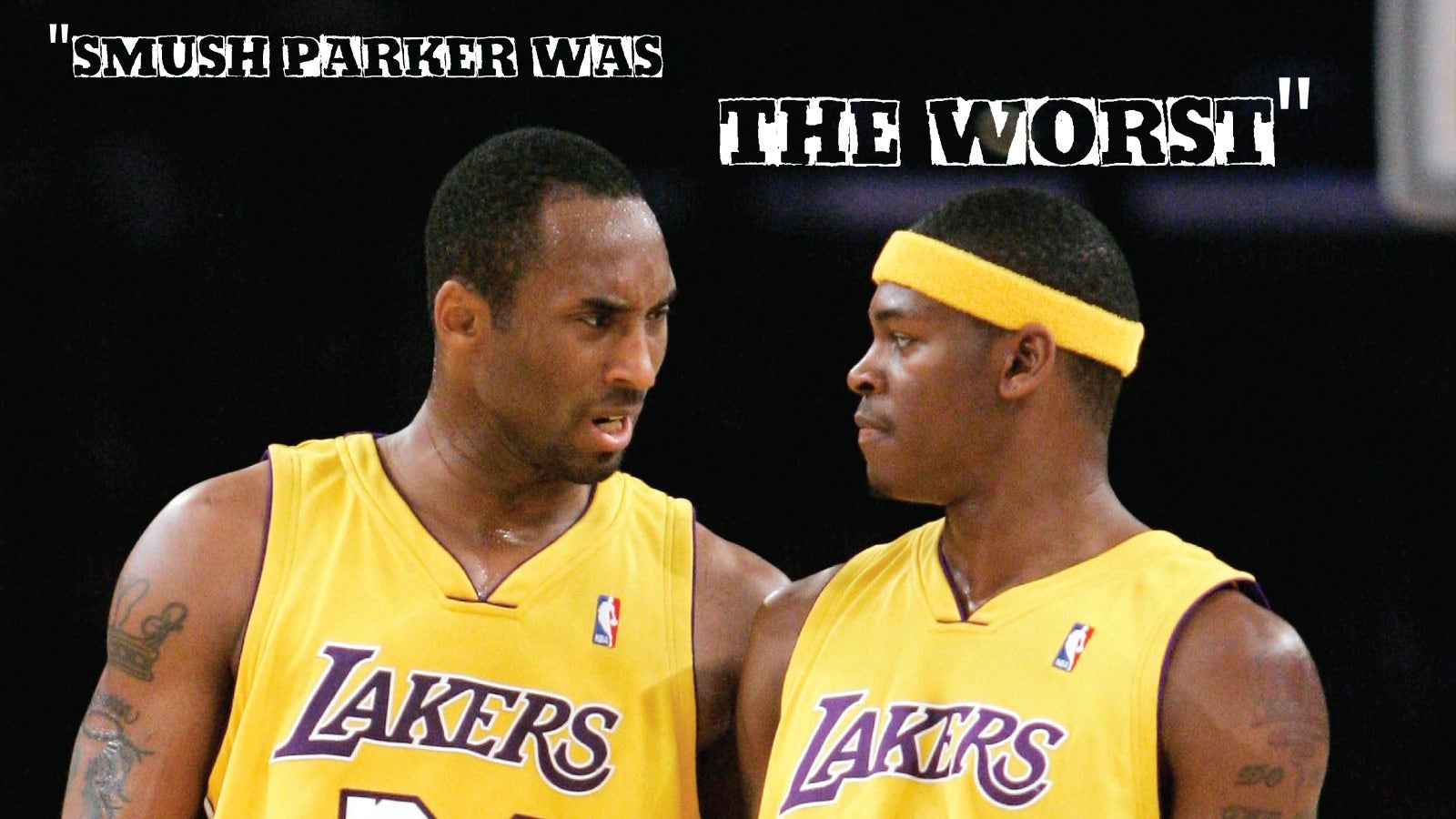 Poor, poor Smush. And that wasn’t the extent of Bryant’s quote. He continued:

"Smush Parker was the worst. He shouldn’t have been in the NBA but we were too cheap to pay for a point guard. … I was shooting 45 times a game [in 2007]. What was I supposed to do? Pass it into Chris Mihm and Kwame Brown?"

18. "I would go 0-for-30 before I would go 0-for-9. 0-for-9 means you beat yourself, you psyched yourself out of the game. … The only reason is because you’ve just now lost confidence in yourself."

This quote is reportedly second-hand from the director of Kobe’s recent documentary. But it absolutely sounds like something Bryant would say.

17. "If I wanted to play, I’d still be playing for the Lakers. The health thing I could’ve figured out…I just don’t want to play anymore."

Yes, that’s right. While you see Kobe out on the court struggling to walk, he’s convinced he could keep going if he really wanted to.

He just doesn’t want to, he claims. So he’s taking his ball and going home.

In early 2015, retirement was still far on the horizon for Kobe. Asked if having his arm fall off would cause him to retire, Bryant responded in typical Mamba fashion with the quote above.

15. "Better learn not to talk to me. You shake the tree, a leopard’s gonna fall out." 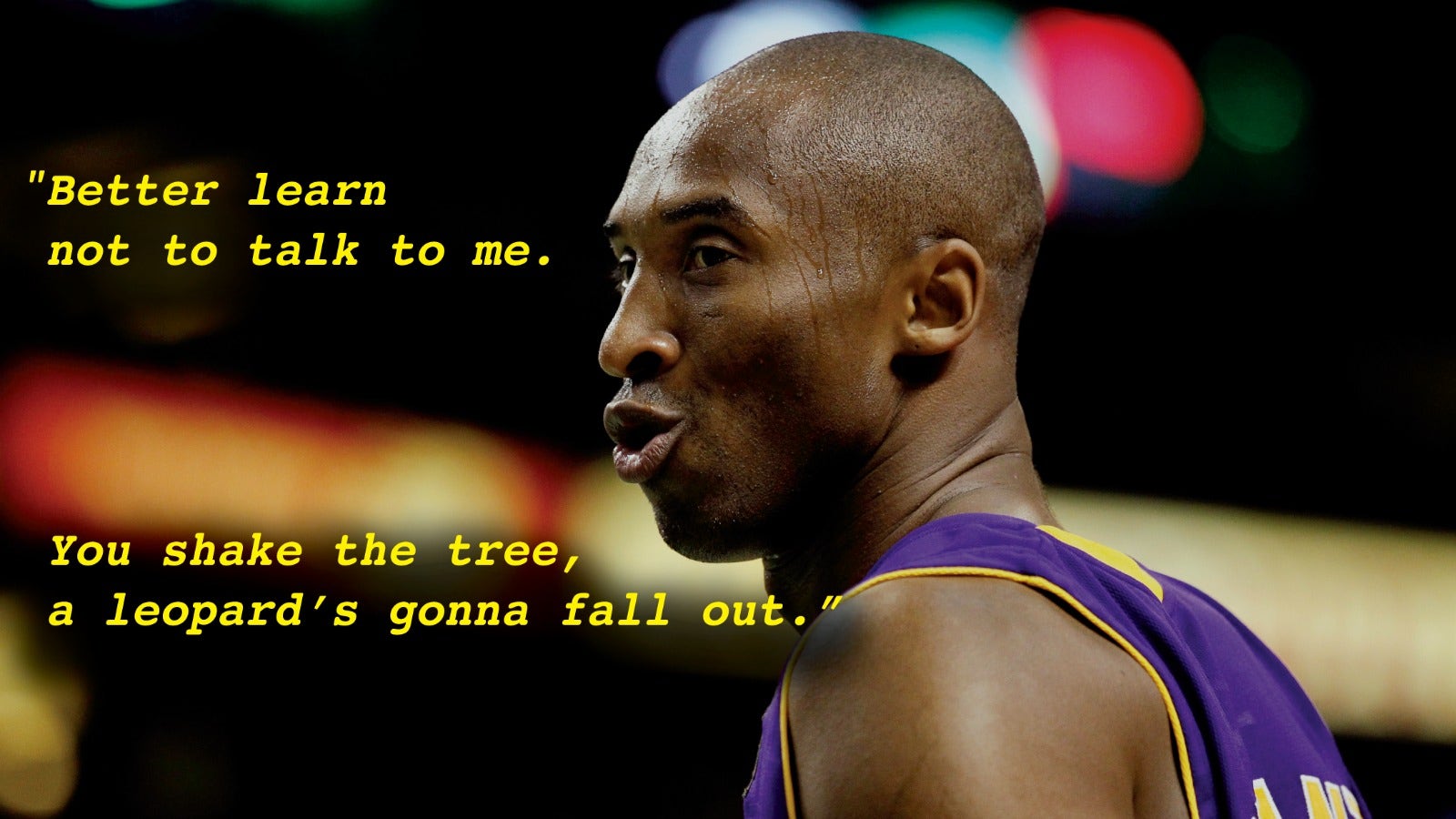 Kobe’s gone to the animal comparisons time after time in his career, and this might be the most fitting — other than the whole "Mamba" analogy, of course. After J.R. Smith and Kenyon Martin got under Bryant’s skin in the playoffs, he went off for 20 points in the first quarter of Game 2 and uttered this famous warning following the game.

2007 was a dark time in Los Angeles, and Kobe was unhappy with the Lakers because of a leak within the organization that blamed him for Shaquille O’Neal’s departure. Asked if the relationship could be salvaged, Bryant was clear:

"No," Bryant said. "I just want them to do the right thing."

13. "The last time I was intimidated was when I was 6 years old in karate class. I was an orange belt and the instructor ordered me to fight a black belt who was a couple years older and a lot bigger. I was scared s—less. I mean, I was terrified and he kicked my ass. But then I realized he didn’t kick my ass as bad as I thought he was going to and that there was nothing really to be afraid of. That was around the time I realized that intimidation didn’t really exist if you’re in the right frame of mind." 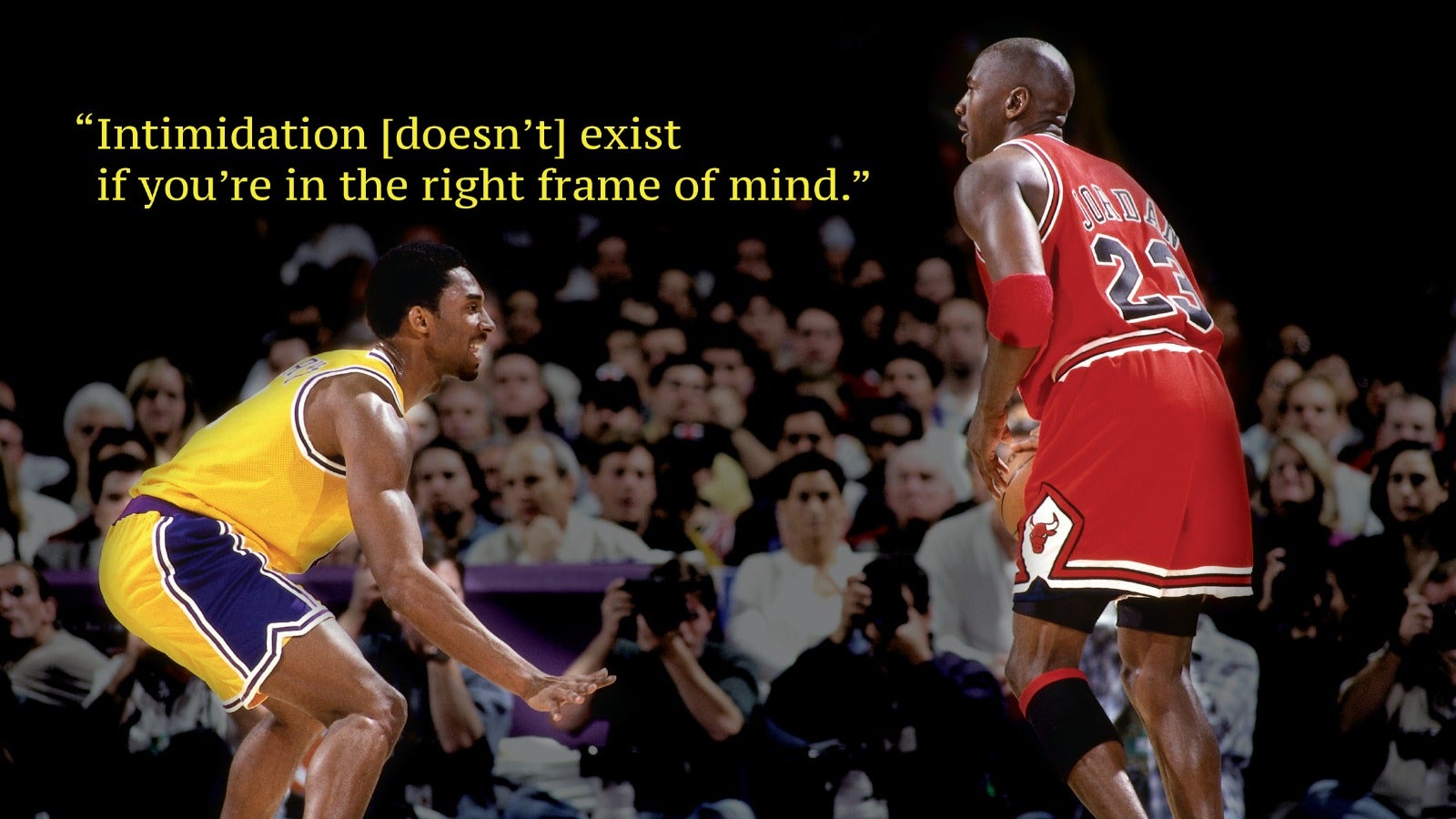 12. "Because I don’t want chumps, I don’t want pushovers, and if you’re a chump and a pushover, I will run over you."

The pushover in question, hypothetically, was Jeremy Lin, whom Bryant had encouraged to be more aggressive during his stint with the Lakers. When Lin eventually came out of his shell, Kobe explained why he was so hard on the now-Hornets point guard. 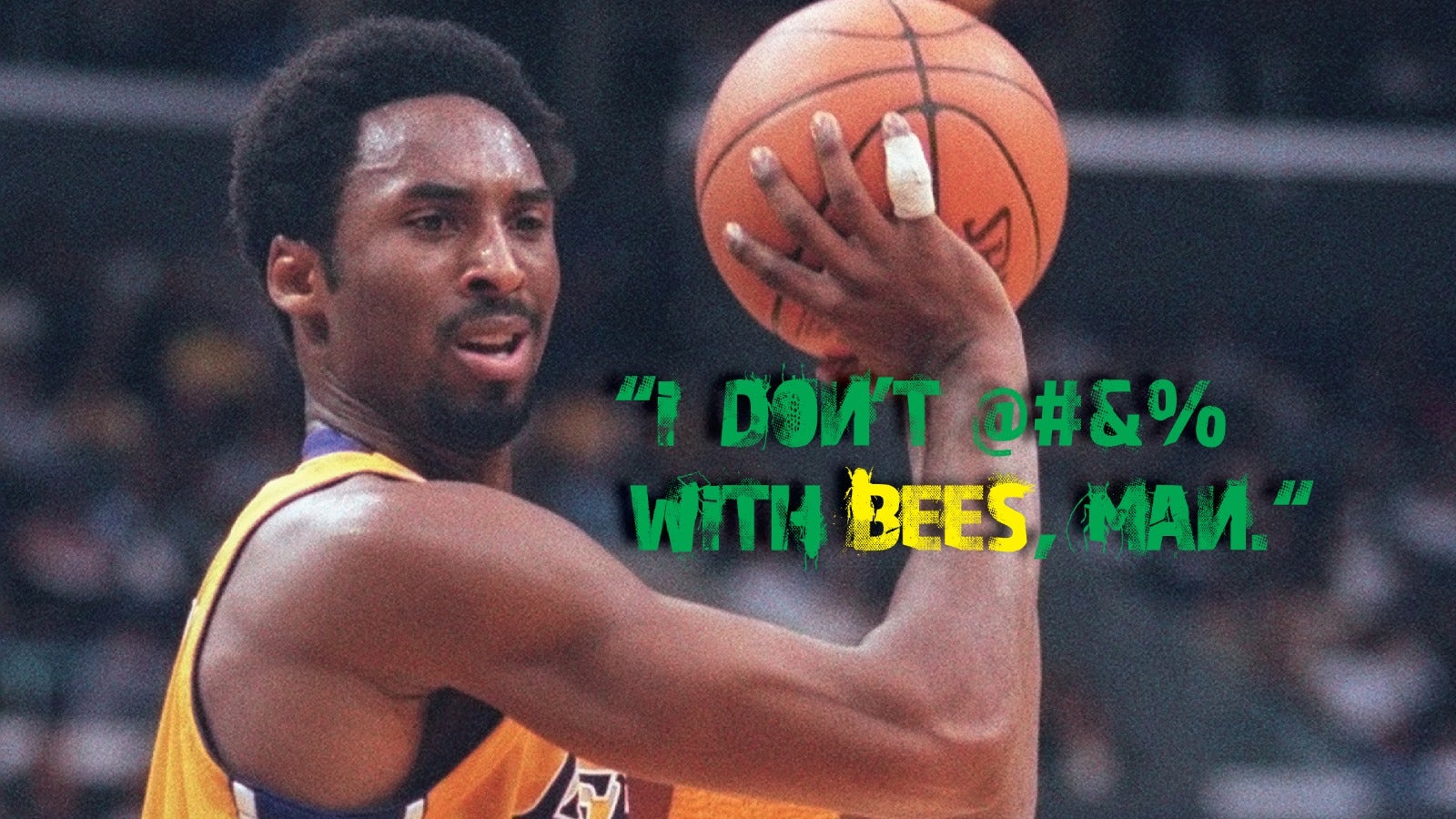 10. "I’d rather not have to do that, but you can’t sit back and watch crime happen in front of you."

The "that" in question was Bryant’s 44-point outburst (on 34 shots) in a lopsided loss to the Golden State Warriors at the start of the 2014-15 season. Bryant extended his crime metaphor, too:

"Obviously I’d rather get guys involved early, but if a purse gets stolen in front of you, how many blocks are you going to let the guy run?" he asked.

Bryant wanted no part of a reporter’s question about Phil Jackson winning so many titles simply because he had great players. That’s the way basketball works, after all. It takes great coaching and great talent.

8. "I just got one more than Shaq. You can take that to the bank … You guys know how I am. I don’t forget anything."

The fifth ring might have been the sweetest for Bryant, given the tale of the tape against his former teammate.

7. "I was like a wild horse that had the potential to become Secretariat, but who was just too f—ing wild. So part of that was [Phil Jackson] trying to tame me." 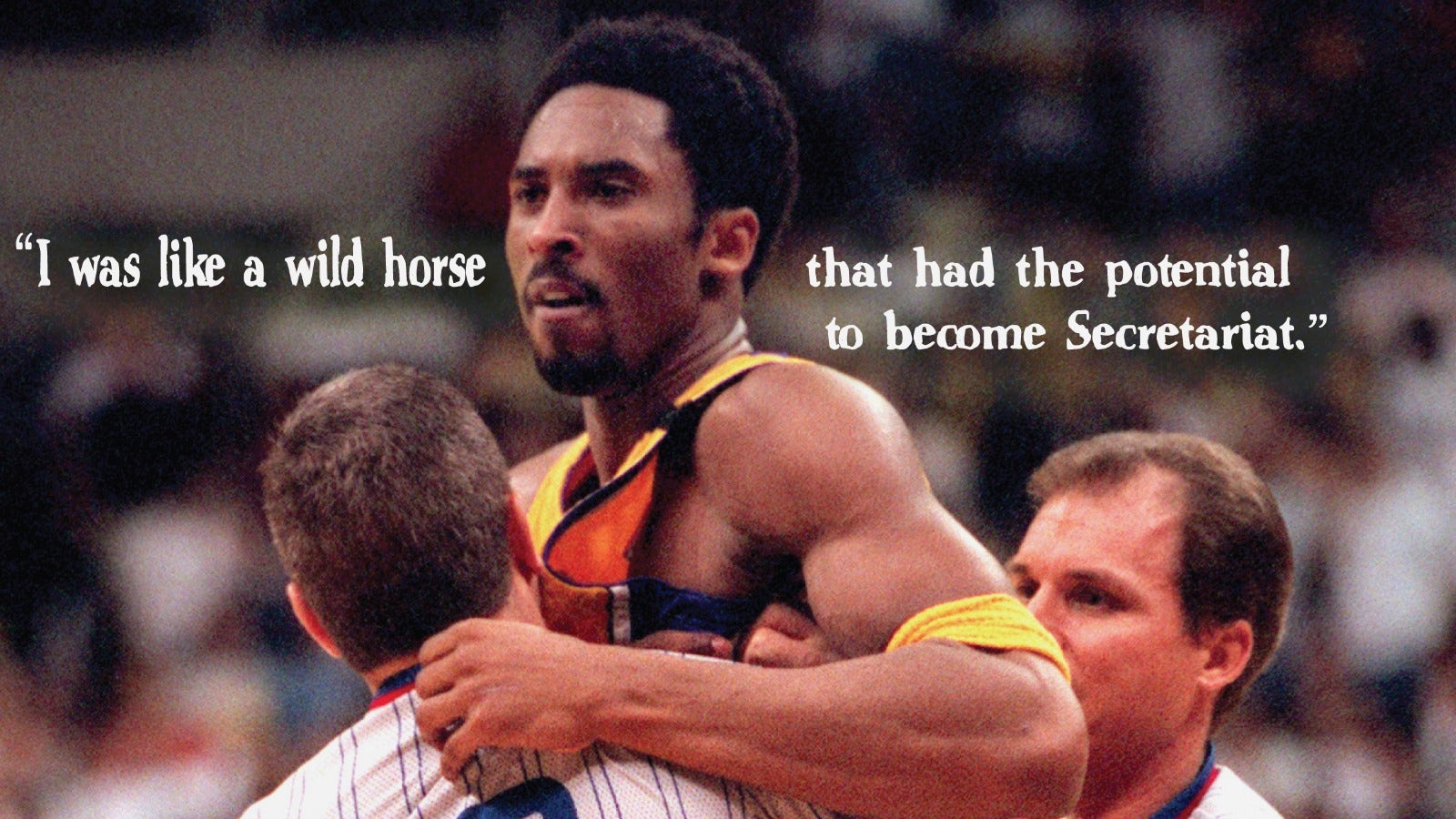 In a wide-ranging interview with GQ, Bryant compared himself to a Harry Potter villain and to famous musician Mozart, too. But he wasn’t the first person to make the Secretariat comparison. Former Lakers head coach Mike D’Antoni saw the similarities as well.

6. "I close my eyes and just reminisce. That’s what keeps me sane."

Kobe Bryant on all the past Lakers success: "I close my eyes and just reminisce. That's what keeps me sane."
(Lakers are 15-59)

5. "Losing is losing, there aren’t different degrees of losing. You either win a championship or you’re s—. It’s very black & white to me." 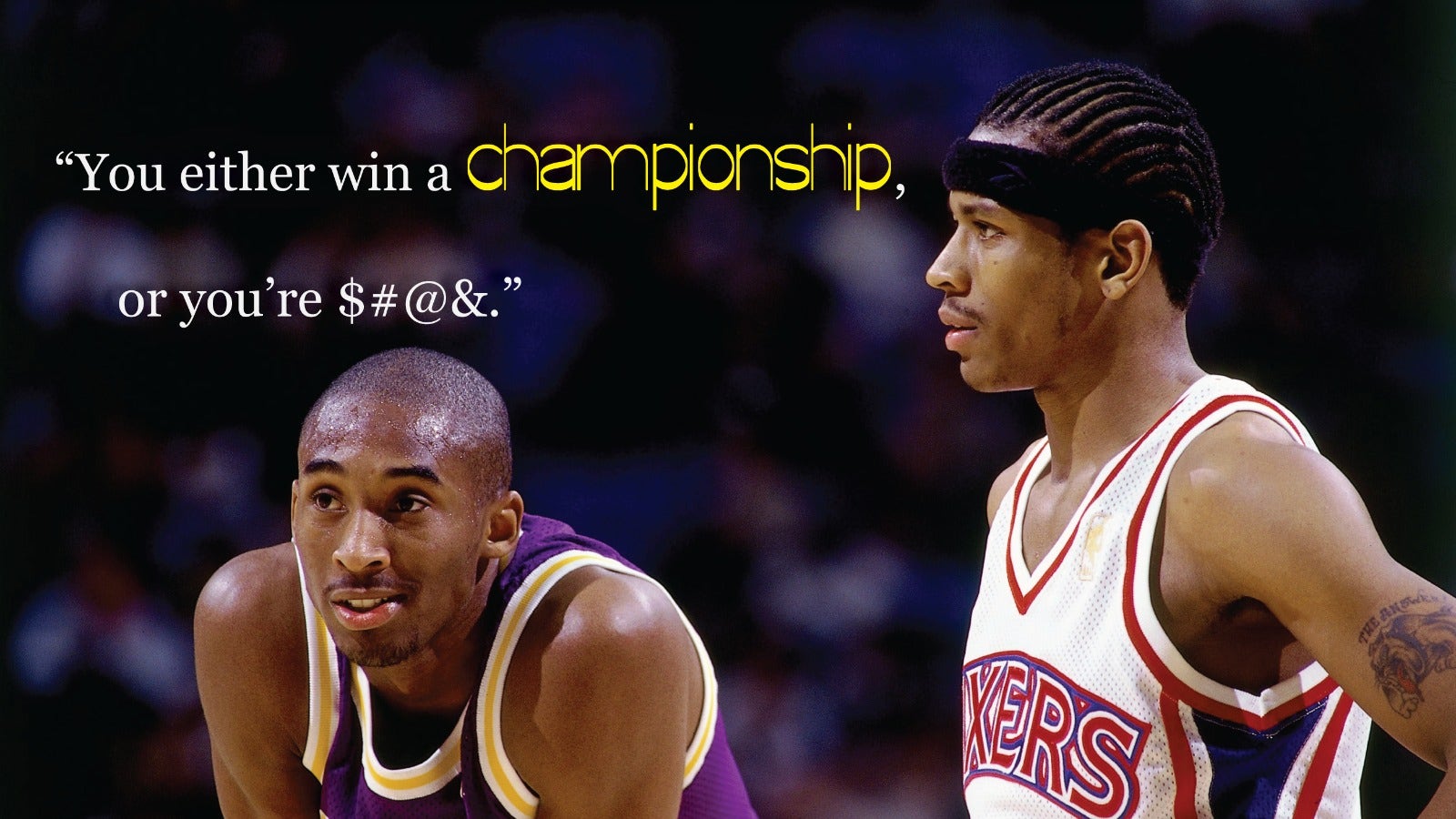 No, this Lakers season isn’t any harder on Kobe than others where they’ve failed to win a championship. It’s all the same. Sorry, AI.

4. "Leaders don’t beg for a contract extension and negotiate some 30 million (dollars) plus per year deal in the media when we have two future Hall of Famers playing here pretty much for free. A leader would not demand the ball every time down the floor when you have the three of us (Karl Malone, Gary Payton, Bryant) playing beside you, not to mention the teammates you have gone to war with for years — and, by the way, then threaten not to play defense and rebound if you don’t get the ball every time down the floor."

If we could only pick one Kobe quote about Shaq to explain their entire relationship, it would be this one. It’s lengthy, but it encapsulates everything that went wrong between two of the greatest NBA players ever. And that kind of makes us sad.

3. "I feel like killing everybody every time I go to the arena." 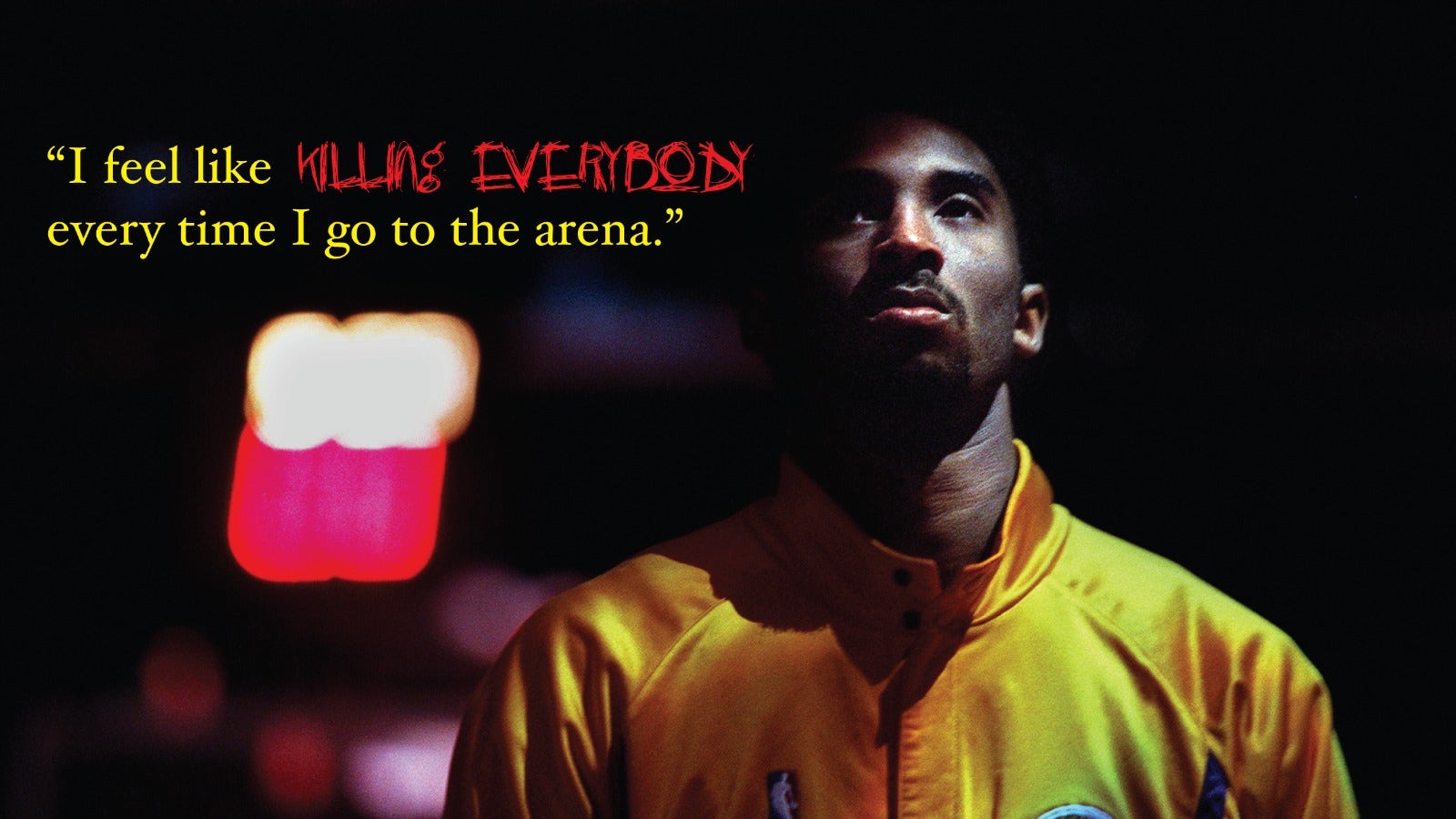 To some extent, one could argue that’s Bryant’s mentality at all times. But he was specifically referring to the horror show last year, when he couldn’t do anything but watch as the Lakers reached new lows:

"To answer your question, yeah, I still feel it, probably more than anybody in the organization does, and it drives me absolutely crazy."

2. "We’re happy — until next January when people start talking about trading one of us."

Okay, we lied. This quote is probably the best one to sum up Kobe and Shaq. Probably. They’re all so good, you guys. It’s hard to choose.

But either way, this one is excellent for its humor, self-awareness and veracity.

1. "Friends can come and go, but banners hang forever."

Here, then, are the nine words that define Kobe Bryant. We couldn’t have said it any better ourselves.

Kobe’s last game is Wednesday, at home against the Utah Jazz. And if you’ll excuse us, we’ll be weeping in the corner.