The individual storylines change from year to year, but as the NCAA tournament unfolds each spring, it’s the buzzer-beaters that ultimately put the Madness in March.

This past weekend saw a pair of clutch game-winners from Florida’s Chris Chiozza, to send the Gators to the Elite Eight, and North Carolina’s Luke Maye, to put his team in the Final Four — where the Tar Heels will look redeem themselves after a devastating down-to-the-wire loss to Kris Jenkins and Villanova in last year’s national championship game. And as you thumb through the NCAA tournament annals, it seems every edition includes a last-second bucket that becomes the lasting memory of the event.

One of those snapshots was taken 30 years ago on March 30, 1987, when Indiana’s Keith Smart rose over Syracuse forward Howard Triche and nailed a baseline shot — or “The Shot,” as it’s become known — to deliver Indiana its fifth, and most recent, national championship. And though Smart says he didn’t necessarily appreciate the magnitude of the basket at the time, the 52-year-old Memphis Grizzlies assistant coach now recognizes how powerful the moment was.

“The game was over, we finally got everybody off the floor, everyone was sitting in the locker room waiting, and finally Coach comes in and he starts to talk,” Smart said of former Hoosiers coach Bobby Knight by phone last week, recalling Indiana’s 74-73 win at the Louisiana Superdome. “And I remember he made this statement, he said to us, ‘You guys have no idea what you’ve done.’

A junior college transfer, Smart spent two seasons in Bloomington, and as he entered his first, in the fall of 1986, the program was looking to right the ship — at least by Indiana standards.

National title-winners under Knight in 1976 and ’81, Indiana hadn’t won the Big Ten since 1983 and saw its previous two seasons end with an NIT berth and a first-round loss to 14-seed Cleveland State, the former coming weeks after Knight’s infamous 1985 chair-throwing incident and the latter serving as the denouement in John Feinstein’s heralded book, “A Season on the Brink.”

Given the team’s recent setbacks, Smart says he felt pressure to help returning stars Steve Alford, Daryl Thomas and Rick Calloway guide Indiana back to its rightful place among the college hoops elite, but admits he didn’t fully grasp the level of disarray the program was in, or the way it manifested itself on the court.

“The term you hear now is ‘a sense of urgency,’ but when myself and Dean Garrett came to Indiana, we just assumed that this is the intensity of playing at a school that’s going to be playing for championships and going after it at a high level,” said Smart, who played his first two seasons at Garden City Community College, while Garrett transferred in from City College of San Francisco. “We assumed that’s always how it is. But Coach really laid the foundation for our team that year based on the loss the year before.”

Whatever the motivation, Indiana, ranked No. 3 in the preseason AP poll, never fell out of the top 10, won a share of the Big Ten championship and entered the NCAA tournament as the No. 1 seed in the Midwest region. However, Knight was careful not to let his team’s strong regular season lead to complacency in the postseason.

Convincing the team of that wasn’t difficult, either, considering that the Hoosiers had played in 11 games during the regular season that were decided by five points or fewer — including two of their four losses. That experience later proved valuable as Indiana staved off a late Duke rally in a six-point win in the Sweet 16, then used a Calloway putback with six seconds left to steal a come-from-behind win over 10-seed LSU in the Elite Eight.

“I think we had four or five of our guys make a shot to either take a game to overtime or win a game or tie a game during the course of the year,” Smart said. “So going through all those moments over the course of the season, in close games, and then getting into the tournament and having some of those close games, you didn’t panic.

“Even the Auburn game, we got down and Coach said, ‘These guys are going to score 120 points if you don’t start playing Indiana basketball,’” Smart continued, recalling the team’s 107-90 second-round win over the 8-seed Tigers. “And we settled down, we got back to our game and eventually won it.”

For many followers, Indiana’s national semifinal, against fellow No. 1 seed UNLV, was viewed as the de facto national championship game, but after a fast-paced 97-93 win over Jerry Tarkanian’s Runnin’ Rebels, the Hoosiers got all they could handle from Jim Boeheim’s Orangemen in front of a New Orleans crowd of 64,959.

With 38 seconds left, Indiana trailed 73-70, and after Smart cut the deficit to 73-72 with a jumper with 32 seconds to play, he immediately fouled Syracuse freshman Derrick Coleman, putting the 68.6-percent foul shooter on the line for a 1-and-1. Coleman then missed the first and after an IU rebound — Boeheim elected to leave his players back on D rather than have them fight for an offensive board — the race to the finish was on.

But while the assumption was that Alford, the team’s leading scorer, would take the final shot — broadcaster Brent Musburger speculated that Alford, now the coach at UCLA, would hoist a potential game-tying 3 in the event Coleman made his free throws — Smart says there was no particular play in mind when Thomas passed the ball to Alford to start the play.

“We ran a motion offense predicated on what the defense would allow,” Smart said. “You don’t force things into areas that you know may not have success. Obviously we had a great player in (Alford), who could come off screens and shoot the ball from 3-point range, but we trusted what we were going to do. We weren’t going to force the issue.”

After the rebound, Smart and Alford burned about 20 seconds off the clock, passing the ball back and forth at the top of the key as the rest of the offense got into place. Then with 11 seconds left, Smart drove to his left and dumped the ball off to Thomas on the low block. Thomas was being hounded by the future NBA rookie of the year Coleman, though, so he passed back to Smart with seven seconds to go, and with four ticks left on the clock, Smart’s fall-away jumper fell through the hoop, giving Indiana the lead for good.

“When it left my hand, I felt it was good, I thought it was in,” Smart said. “When I’d taken the one earlier from the other side of the floor, I knew it didn’t feel right, I was too stiff-armed. But when it came around to me again, I felt real smooth, because I was moving into the comfort area of how I play.”

According to Smart, his comfort with the shot was a result of years of practice on that particular play.

“When you’re a young kid, in the summertime playing basketball, and we’d finish up playing pick-up, five-on-five, before we left the court to go home, we all would have to make a certain number of shots from the baseline, falling out of bounds,” Smart said. “That was the thing, drifting out of bounds as you released the shot.”

Of course, in Smart’s younger days, the thought wasn’t that he’d someday use the shot to win a national championship.

“In high school, the cheerleaders were on the baseline, so what you wanted to do was take a shot then fall out of bounds into the arms of the cheerleaders — it was this little thing we had as teenage boys,” Smart said with a laugh. “I wasn’t thinking of that moment — and if I had thought, ‘If I don’t make this shot, we lose the national championship,’ I probably wouldn’t have (practiced it so much).

“But I took what the defense gave me,” Smart continued, returning to the ‘87 title game. “And I was able to make it, based on many years of preparation for that moment — never actually thinking that I would be in the moment, let alone be the one to take the shot.”

Following a ‘Cuse timeout, Smart, the tournament’s most outstanding player, came up with a steal on Coleman’s last-ditch, full-court heave, and as the clock ran out, Musburger bellowed, “Indiana wins the championship, Keith Smart is the hero.” And as Knight told his players after the game, it wasn’t until decades later when that line and the gravity of what Smart accomplished sunk in.

“When my boys were 5 and 7, I’ll never forget we were watching one of the tournament games, and the kids recognized me on TV,” Smart said. “They were showing clips from different champions and they saw me and they saw my shorts and how short they were and got a kick out of that. But then Brent Musburger said, ‘…and Keith Smart is the hero,’ and my youngest son took off running around the house.

“And that whole moment, from that night,” Smart continued, “when Coach Knight said to us, ‘When you’re 20 or 30 years removed, that’s when it’ll sink in,’ — that’s what it did.”

Unfortunately, the following year, the Hoosiers’ title defense ended in the first round with another upset, this time to 13-seed Richmond, and after a cup of coffee with the San Antonio Spurs in 1988, Smart spent most of his career playing overseas. Then, in the late ‘90s, Smart got into coaching and has since served as both an assistant and head coach of the Cavs, Warriors and Kings, in addition to a stint as an assistant in Miami prior to landing his latest gig with the Grizzlies.

During that time, Smart’s sons, Andre and Jared, have grown into adults, but even at 20 and 18, Smart’s boys still love reliving the greatest play their dad ever made, as they watch and wait, together, for the next iconic March Madness shot to fall.

“I’ll never forget when Gordon Hayward missed that half-court shot in Indianapolis (against Duke, in the 2010 championship game), and every year you go through that, you do get into it,” Smart said when asked if the tournament makes him nostalgic. “Because, like Coach told us, when you’re watching the tournament and you can share with your kids — ‘When Dad played in that, he won it.’

“Now, my sons (will tell) their friends, ‘You know, he’s a national champion — he made that shot,’ and they kids will obviously say, ‘What shot?’” he continued. “So they’ll say, ‘Google his name!’ and then I pop up, the video will show, and they’ll get a chance to see it. And it’s amazing to see the faces of some of the kids who just see me as Mr. Smart.” 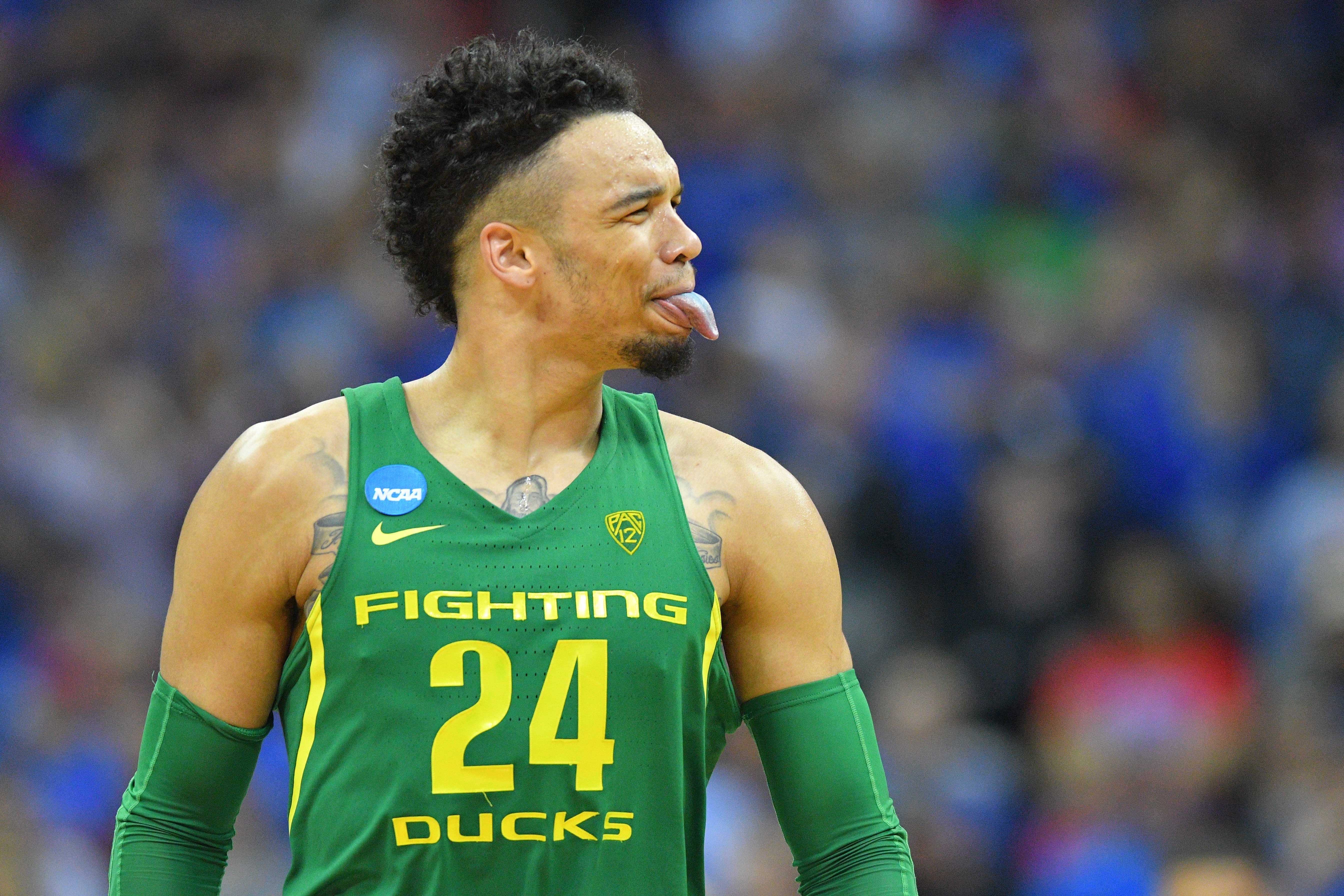