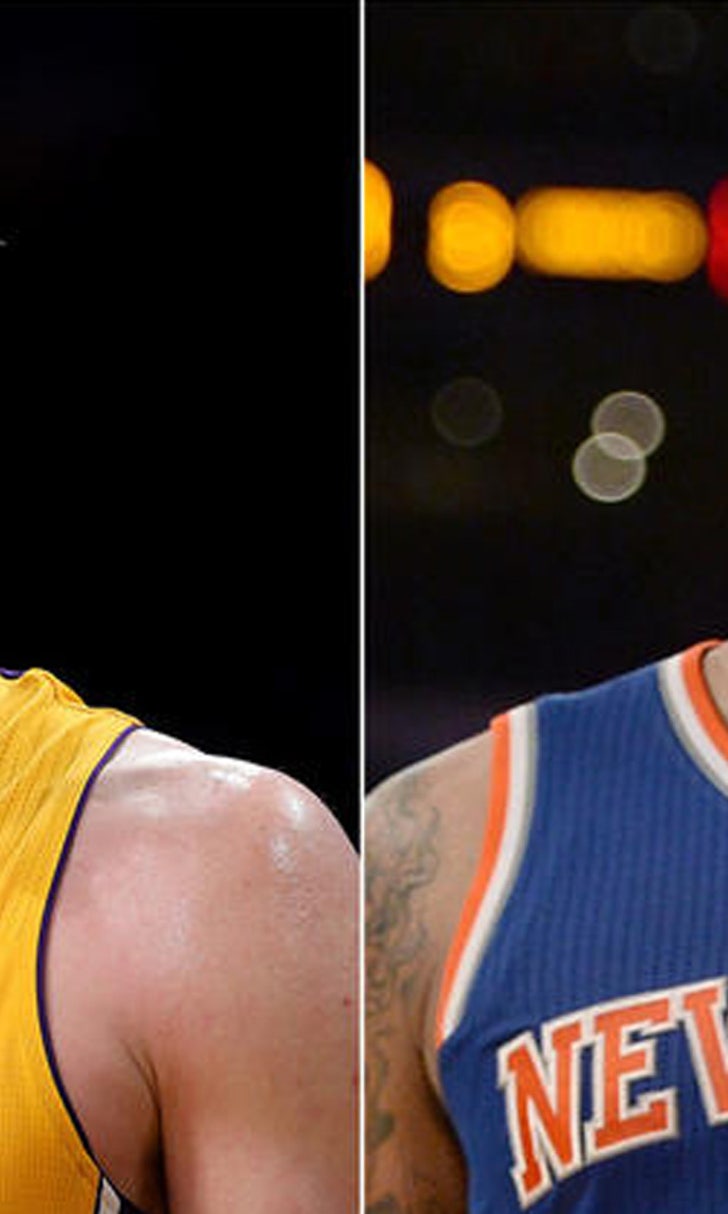 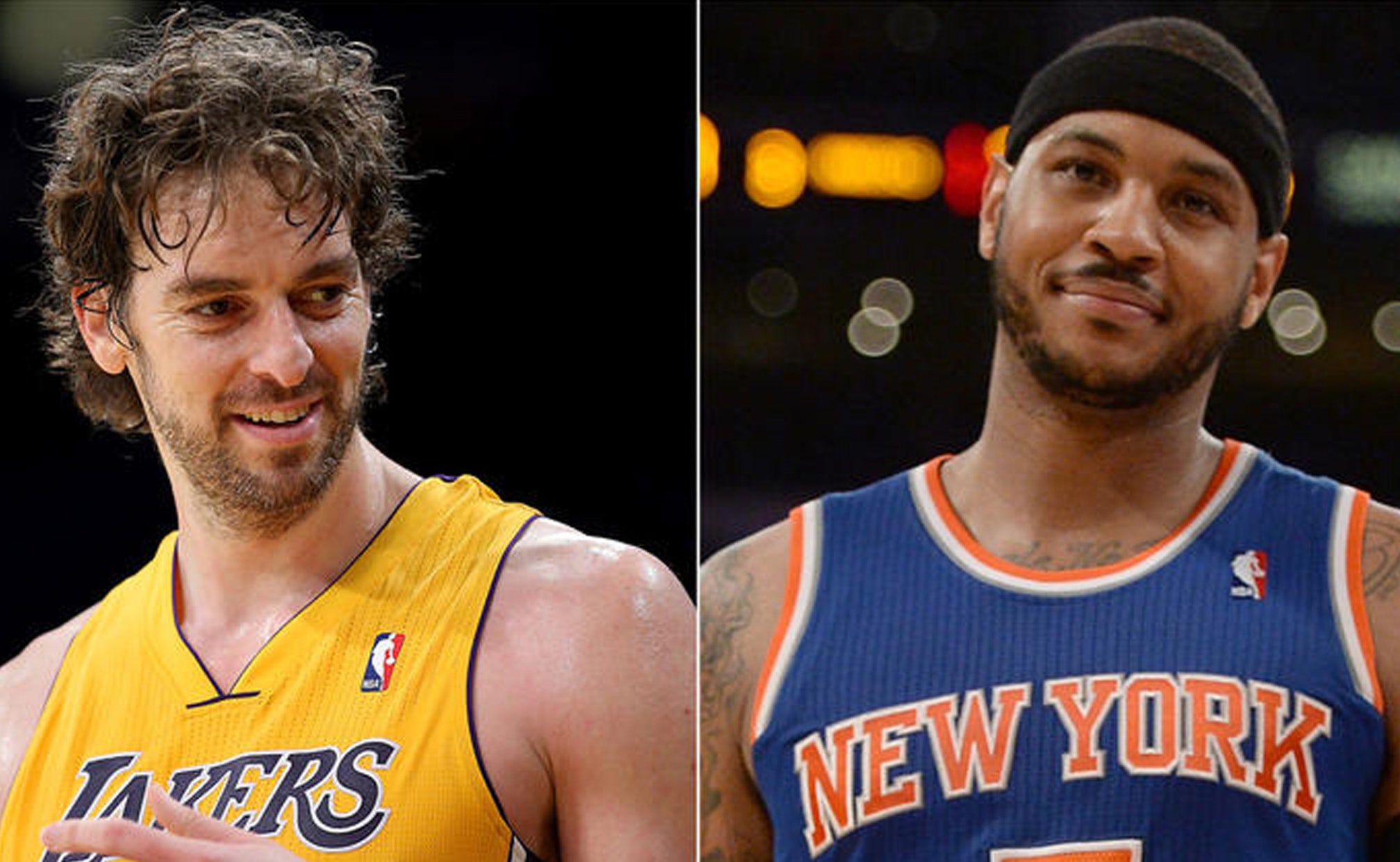 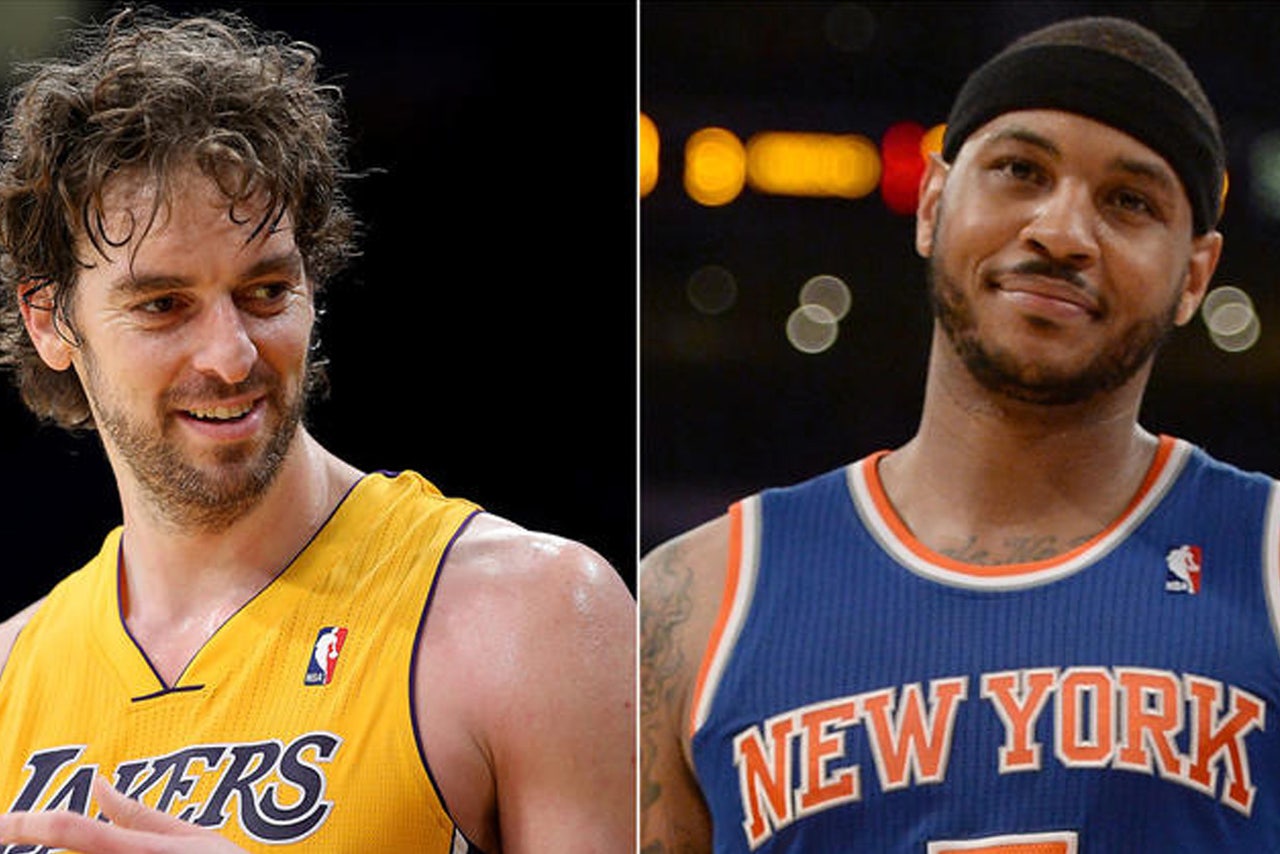 The Lakers are envisioning a future with Carmelo Anthony and Pau Gasol together in their frontcourt, hoping to make it a reality with step one Thursday.

The Lakers will meet with Anthony at an undisclosed location in Los Angeles, pitching their franchise as a perennial championship contender and their city as a wealth of opportunity.

If Anthony eventually chooses the Lakers, they feel they have a good chance of bringing Gasol back.

"If the Lakers get Carmelo, Pau will stay," said a person familiar with Gasol's thinking.

Assuming Anthony wanted a maximum salary starting at $22.5 million next season, the Lakers could waive Steve Nash and spread his salary over three years, and give Gasol $8 million or $9 million next season as part of a multiyear deal.

They would have very little to offer other players beyond that, giving them a nucleus next season of Gasol, Anthony, Kobe Bryant, rookie power forward Julius Randle and a point guard to be determined later -- perhaps incumbent Kendall Marshall or second-round pick Jordan Clarkson of Missouri.

The Lakers will make their pitch to Anthony much more differently than Chicago or Houston, two of the teams he's already visited in their respective cities.

Anthony was the toast of Chicago for a day, his appearance for a meeting at the Bulls' arena captured by a swarm of local TV cameras as he walked past the revered Michael Jordan statue Tuesday at United Center.

Large images of him in a No. 7 Bulls jersey ran the length of the arena, and, later in the day, fans waited for him to finish dinner at the luxurious Peninsula hotel.

Houston, for its part, tried a similar salute that included large electronic images of Anthony wearing a No. 7 Rockets jersey outside its arena Wednesday when he visited. One problem: The number belongs to Rockets guard Jeremy Lin, who is under contract for one more season.

Lin responded on Twitter by referencing a biblical verse: "Luke 6:29 -- If someone slaps you on one cheek, turn to them the other also. If someone takes your coat, do not withhold your shirt from them."

The Lakers will be much more low-key in their approach.

The meeting will include team officials Jim Buss, Jeanie Buss and Mitch Kupchak, as well as Lakers business/marketing expert Tim Harris. It was unclear if Bryant would be present as well, but he and Anthony are longtime friends who have already talked about the high-profile scorer joining the Lakers.

Bryant was involved in the Lakers' ill-fated attempt to keep Dwight Howard last summer, challenging the one-year Lakers pivot man to stay in L.A. if he wanted to win championships.

The Lakers don't have nearly the financial advantage in trying to convince Anthony to leave the Knicks that they held a year ago in trying to get Howard to stay.

Anthony, who also considers Dallas and New York as possible destinations, can make $129.1 million over five years with the Knicks. Any other team that tries to sign him can offer the maximum of four years and $95.9 million.

Randle does not need surgery on his right foot and is clear to begin playing.

Randle consulted with foot specialist Dr. David Porter on Wednesday in Indiana and was told he did not need a screw to be replaced or removed in the foot where he had a broken bone repaired about 18 months ago. It did not affect him last season at Kentucky and he was drafted seventh overall by the Lakers last Thursday.

It is not certain if the power forward will play for the Lakers when summer league begins next week in Las Vegas. He would need to be signed in order to play, and the Lakers were trying to hold off on that until the free-agency period progressed in order to conserve cap room.

If Randle, 19, had needed surgery, it would have sidelined him several months but was not expected to impact the rest of his career.