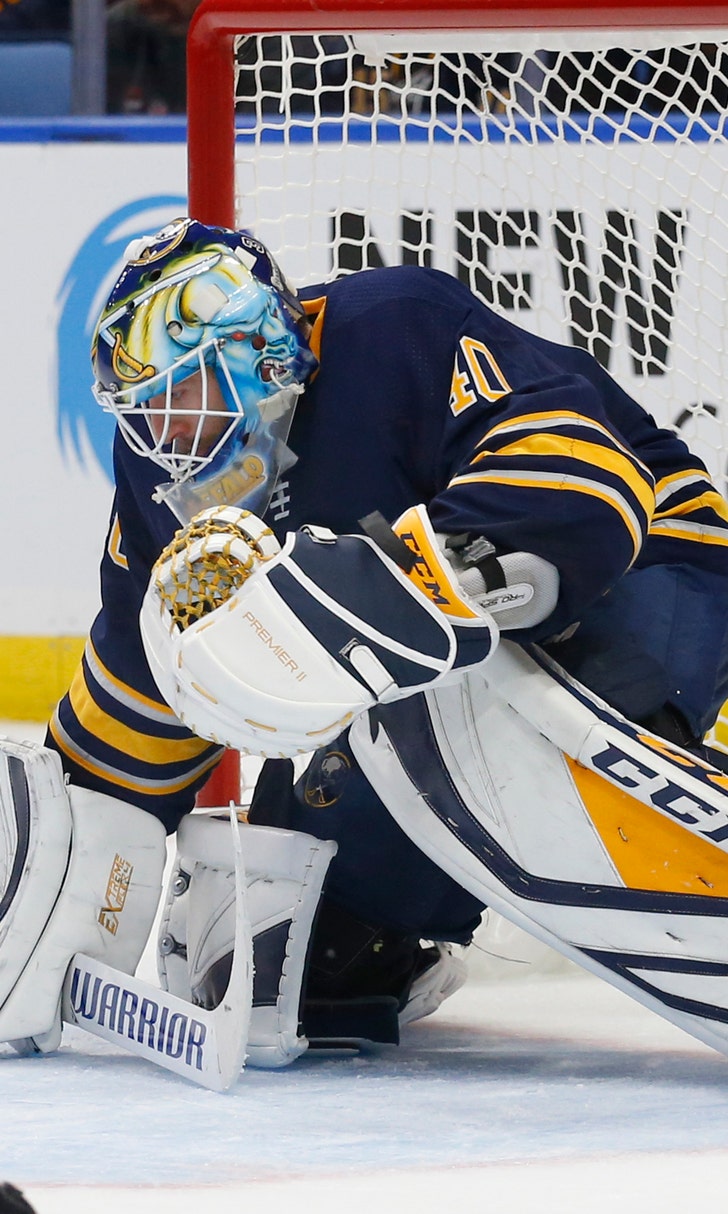 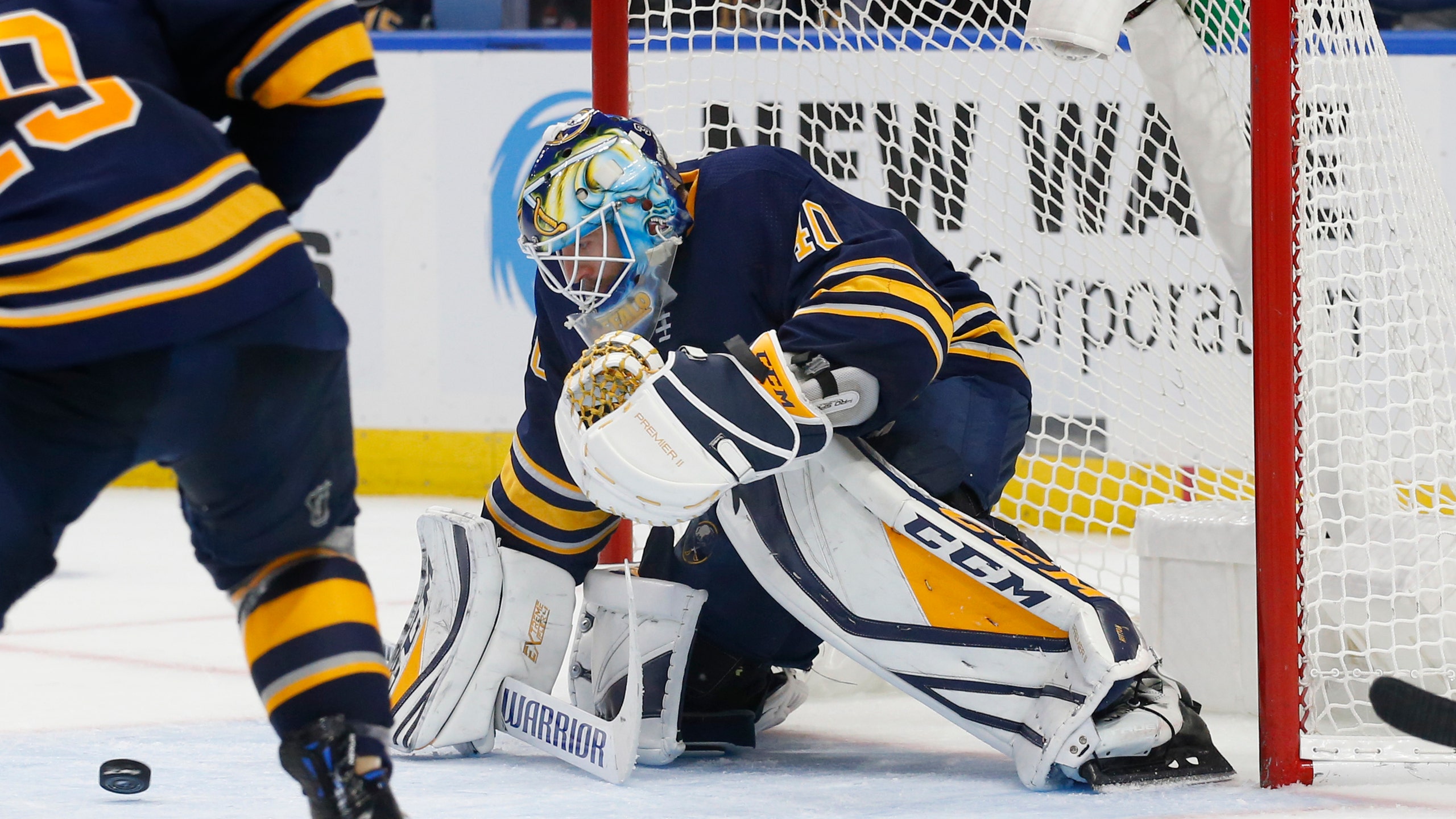 BUFFALO, N.Y. (AP) — The Buffalo Sabres had to go to overtime after squandering a two-goal lead in the third period, but they still made it a perfect 10.

Jeff Skinner scored his team-leading 19th goal 1:19 into overtime, and the Sabres won their 10th straight by beating the San Jose Sharks 3-2 on Tuesday night.

Rasmus Ristolainen scored off a deke around Brent Burns, and Nathan Beaulieu also scored for Buffalo, which hasn't lost since Nov. 4.

Carter Hutton stopped the first 32 shots he faced and 36 overall to extend his personal-best winning streak to eight, during which he's allowed just 15 goals.

Joe Pavelski scored twice for the Sharks in the final 8½ minutes to up his team-leading total to 15.

Martin Jones stopped 28 shots and had little chance on any of the three goals.

Jake Voracek, Radko Gudas and Travis Konecny scored for the Flyers, who coughed up a 3-1 lead over the final 6½ minutes and lost for the sixth time in seven games.

TAMPA, Fla. (AP) — Ryan Miller made 34 saves and Nick Ritchie had a goal and an assist for Anaheim.

Miller won his 373rd game, moving past Andy Moog for sole possession of 17th place on the career wins list. He also moved within one victory of tying John Vanbiesbrouck for the most by a U.S.-born goalie.

Josh Manson and Carter Rowney also scored for the Ducks.

Brayden Point scored for Tampa Bay, which is 3-1-0 on a five-game homestand. Louis Domingue stopped 19 shots.

Victor Rask and Trevor van Riemsdyk scored for the Hurricanes, who have won four of five.

McElhinney made 21 saves in the third period alone for his fourth straight victory.

Montreal outshot Carolina 49-22, but its scoring woes continued. The Canadiens have seven goals in their past four games.

CHICAGO (AP) — Cody Eakin and Shea Theodore each had two goals and an assist, and Vegas picked up its season-high fourth consecutive victory.

Alex Tuch added a goal and an assist as Vegas continued its resurgence in the opener of a three-game trip. William Karlsson, Ryan Reaves and Daniel Carr also scored, and Marc-Andre Fleury made 21 saves for his sixth win in his last seven starts.

Dylan Strome had a goal and an assist in his Chicago debut, but the sliding Blackhawks lost for the third time in four games. Defensemen Gustav Forsling and Erik Gustafsson also scored.

Chicago goaltender Corey Crawford stopped 24 of 30 shots before he was replaced by Cam Ward for the third period. Ward finished with 11 saves.

Tyson Jost had the other goal for the Avalanche, who have won five straight. Colorado also ended an 11-game losing streak to Nashville in the regular season.

WINNIPEG, Manitoba (AP) — Zach Aston-Reese scored the tiebreaking goal with 5:12 remaining off a perfect pass from Phil Kessel, and Pittsburgh rallied past Winnipeg.

Derek Grant's first of the season pulled the Penguins even 5:08 into the third period. Sidney Crosby and Riley Sheahan also scored for Pittsburgh (10-8-5).

Mark Scheifele scored twice for the Jets (13-8-2), and Brandon Tanev had their other goal.

ST. PAUL, Minn. (AP) — Josh Archibald had two goals and an assist, and Arizona rallied from a two-goal, third-period deficit for the win.

Devyn Dubnyk, who missed Minnesota's last game with a stomach bug, stopped 10 of 14 shots. Antti Raanta stopped 17 of 20 shots before leaving with a lower-body injury after two periods. Adin Hill stopped all five Minnesota shots in the third period.

Goalie Mikko Koskinen made 28 saves and earned his second career shutout for Edmonton.

Anton Khudobin stopped 30 shots for the Stars, who lost for the fourth time in five games.

Leon Draisaitl made a perfect pass 2:42 into overtime to set up Klefbom for the winner as the Oilers snapped a two-game losing skid.

Alex Iafallo scored for the Kings in regulation, assisted by Brown. Cal Petersen made 32 saves, and Anze Kopitar had two assists.

Markus Granlund tied the game for the Canucks with 3:43 to go in the third period. Jacob Markstrom stopped 23 shots.

Kings coach Willie Desjardins returned to Rogers Arena for the first time since the Canucks fired him at the end of the 2016-17 season. Desjardins took over in Los Angeles when John Stevens was dismissed this month.

Desjardins received a mix of cheers and jeers from the crowd when his face was shown on the big video screen before the game.