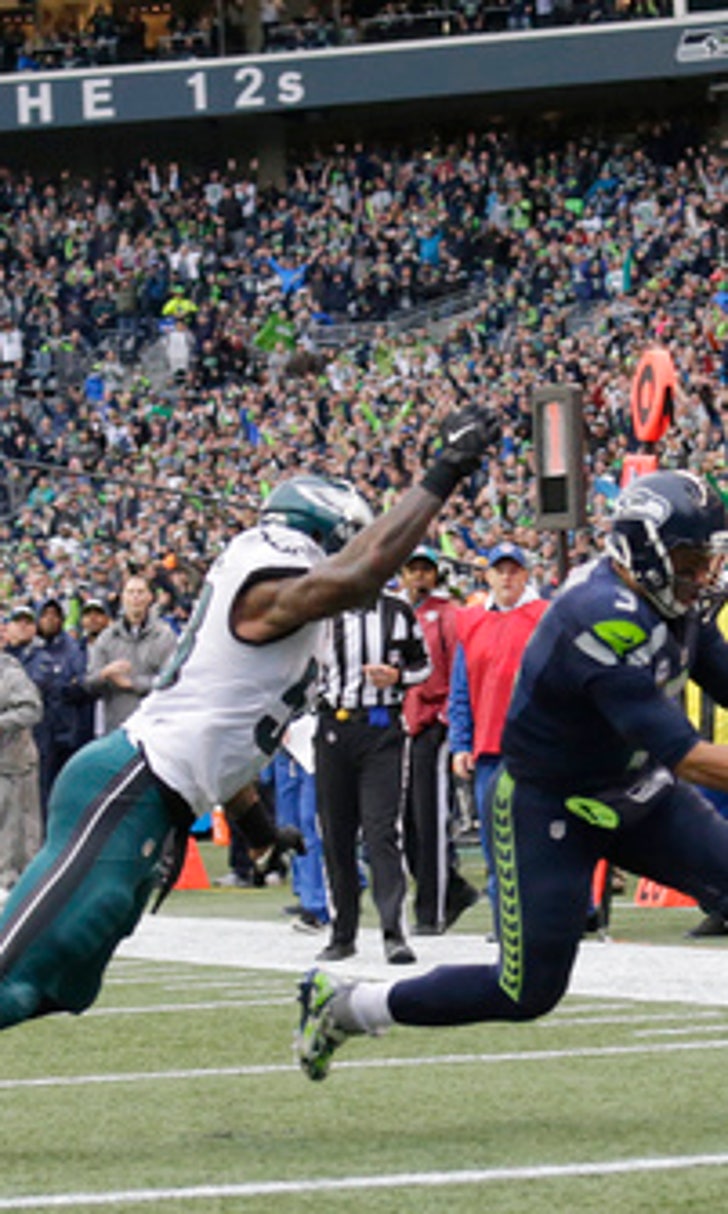 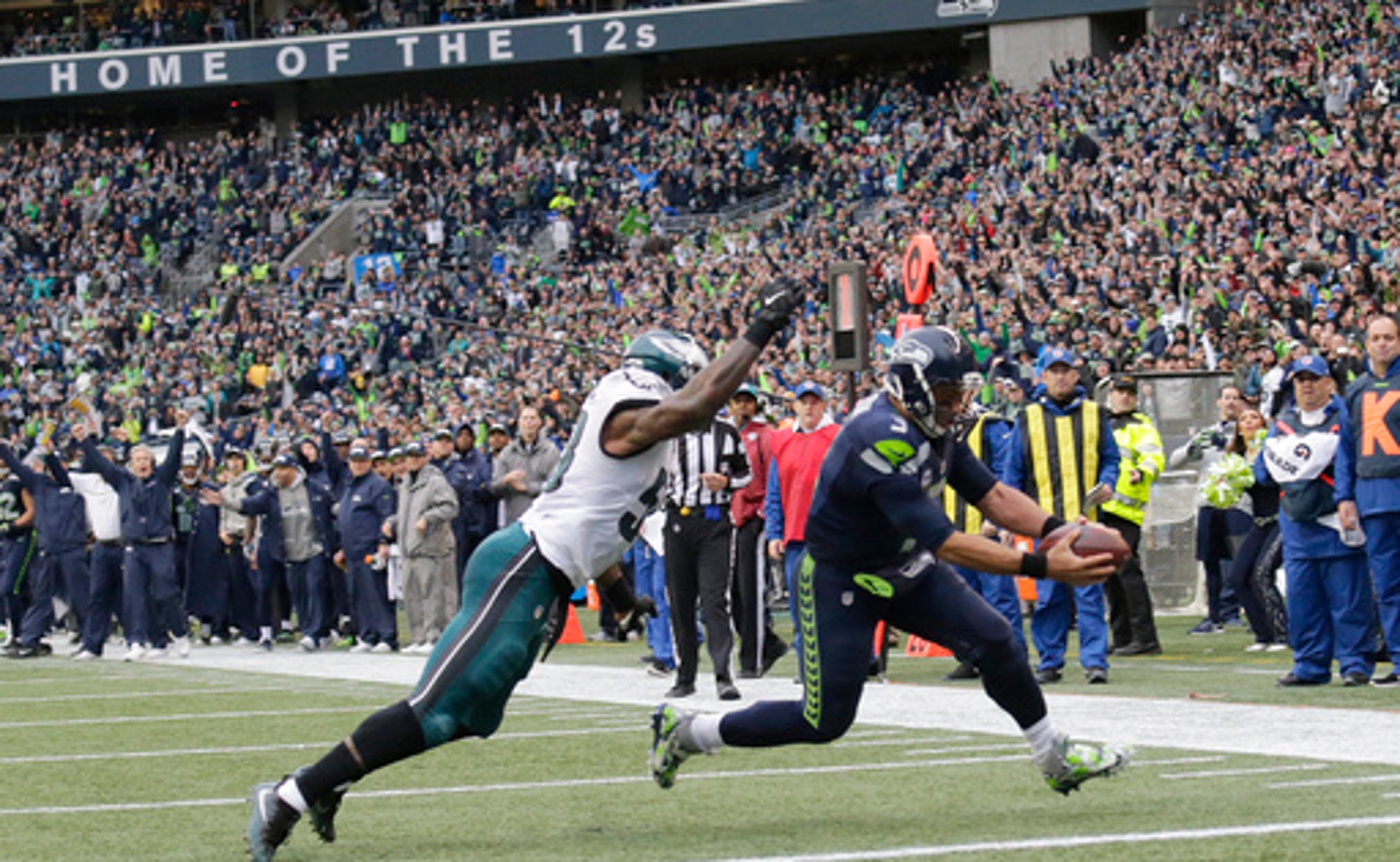 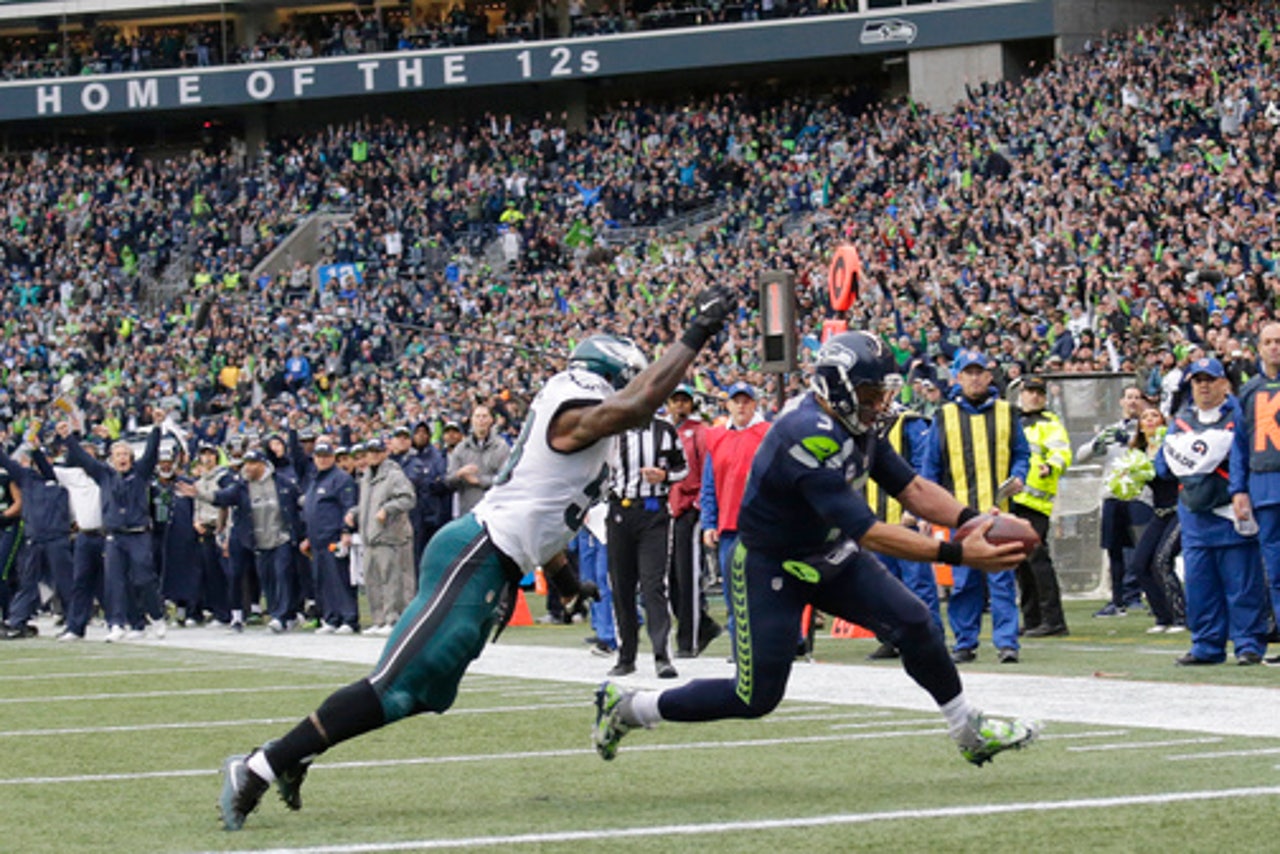 SEATTLE (AP) Everyone knew Russell Wilson could run and pass.

But catch? The Seattle Seahawks quarterback showed he can do that, too.

Wilson threw for 272 yards and a touchdown, and caught a 15-yard touchdown pass from Doug Baldwin as the Seahawks rolled past the Philadelphia Eagles 26-15 on Sunday.

Wilson became the first quarterback in franchise history to catch a touchdown, a perfect end-around pass from Baldwin to Seattle's athletic QB as he ran down the left sideline and dove into the end zone to give the Seahawks a 23-7 lead.

Wilson was already causing headaches for the Eagles well before his TD catch. He scrambled and threw across his body to find Jimmy Graham on a 35-yard catch-and-run touchdown in the second quarter as Seattle built a 16-7 halftime lead that was more than enough. Rookie C.J. Prosise had a 72-yard touchdown run on Seattle's fifth offensive play - the longest run ever by a Seattle player since CenturyLink Field opened in 2002.

Wilson completed 18 of 31 passes with four of them going to Baldwin for 104 yards, along with the first touchdown pass of his career.

Philadelphia lost its fifth straight road game as rookie quarterback Carson Wentz was provided an education on facing one of the best defenses in the NFL.

Wentz (23 of 45 for 218 yards) was good early, especially on Philadelphia's first scoring driving that was capped by a 4-yard TD pass to Zach Ertz in the opening moments of the second quarter. Wentz then went 5 of 14 for 25 yards and two interceptions during the rest of the second and the third quarter.

Philadelphia's wide receivers didn't help Wentz as they were mostly invisible against Seattle's secondary. Until the early stages of the fourth quarter, Eagles' wide receivers had the same amount of yards receiving combined as Wilson - 15. Dorial Green-Beckham caught a 5-yard TD with 3:46 remaining.

The game took a brutal toll with injuries. Philadelphia lost running back Ryan Mathews (knee) and Darren Sproles (ribs) before halftime, while Prosise injured his shoulder and cornerback DeShawn Shead hurt his hamstring in the first half. Neither returned.

The biggest loss could turn out to be Seattle safety Earl Thomas, who grabbed at his left hamstring in the third quarter running in coverage downfield on Wentz's pass that was intercepted by Richard Sherman. Thomas was examined on the sideline for several minutes and taken to the locker room.

Seattle got the services of running back Thomas Rawls for the first time since he suffered a hairline fracture of his right shin in Week 2. With Prosise getting injured, Rawls took the bulk of the carries in the second half and finished with 57 yards on 14 carries.

Seattle coach Pete Carroll picked up the 100th regular season win of his career, becoming the 39th coach in NFL history to reach the milestone.

Nelson Agholor had a first half to forget for Philadelphia.

Agholor failed to line up properly and was flagged for illegal formation on what would have been a 57-yard catch-and-run touchdown by Ertz. Agholor later had a critical drop late in the half as he ran wide open across the middle after beating Sherman off the line of scrimmage.

Superstar Wars
Bill Belichick has anointed a new star. And there's a chance that his powers have already surpassed those of his predecessor.
20 hours ago