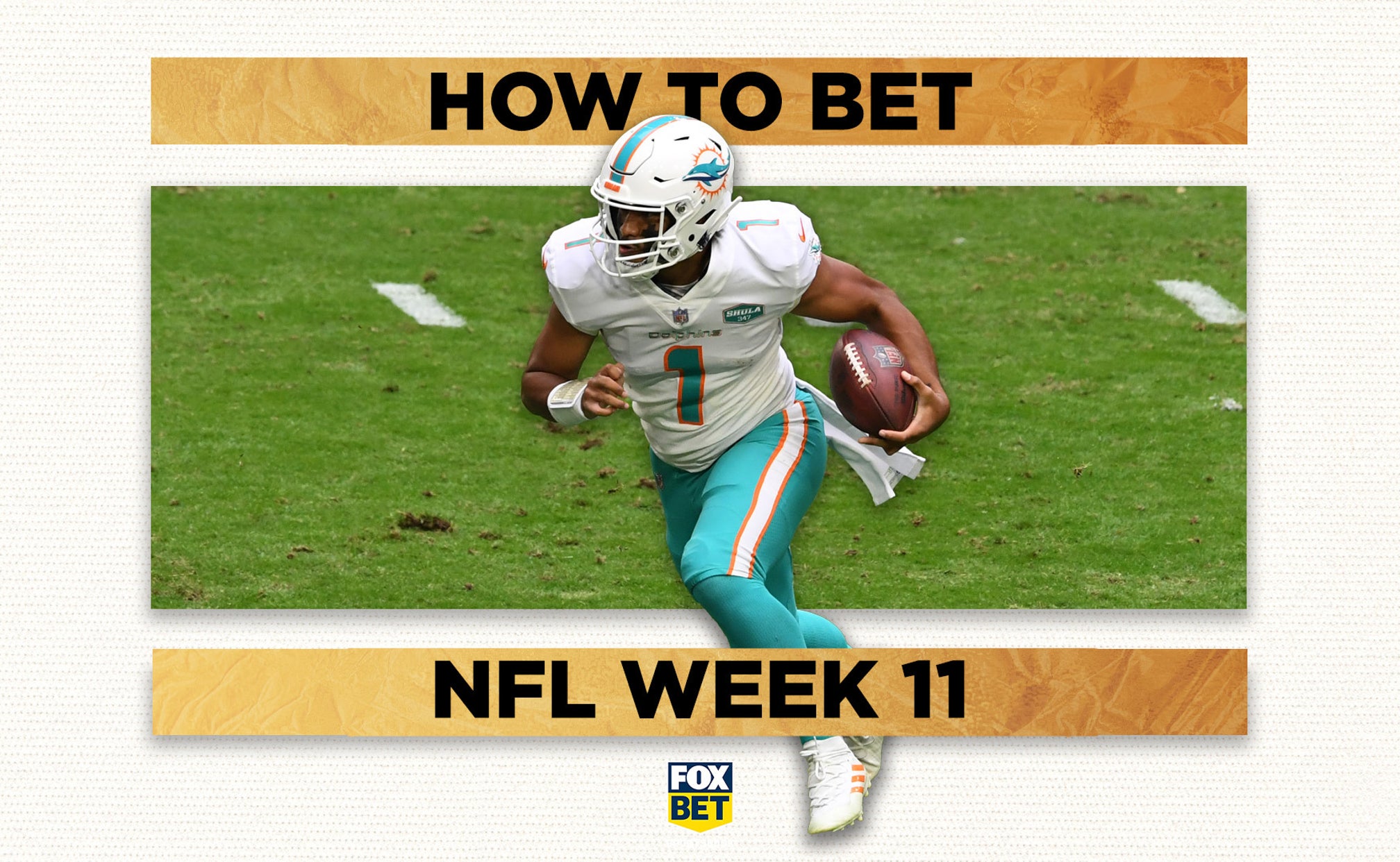 This has been one of the trickiest weeks in the NFL, with multiple games coming off the board due to COVID around the league and quarterback uncertainty in Carolina and New Orleans.

That has led me to stop betting early in the week to try and beat the line moves. Remember, information is the most valuable commodity as a gambler, and the more we know about this week's games before making our picks, the better.

Almost the entire Raiders defense hasn’t practiced this week, and their best defensive lineman is out. The Titans had a scare. The Eagles put four players on the list. The Chiefs offensive line is doing contact tracing. On Friday, Cleveland’ best defensive player, Myles Garrett went on the COVID list and won’t play.

As unfortunate as that all is – and it absolutely is – we have to take it all into account as we handicap Week 11, with all odds via FOX Bet.

WHEN YOU LOOK BEYOND THE OBVIOUS …

A lot seems to be in Indy's favor here.

The Colts come in with extra time to prepare following their destruction of the Titans in Tennessee. Indy’s biggest offensive advantage is the penchant to target running backs in the passing game; the Packers have given up the third most passing yards to RBs. The Colts feature an elite defensive unit that ranks fourth in efficiency against the pass and rush, as well.

But then I looked at the QBs they’ve faced. The two best were Kirk Cousins in Week 2, when the Vikings were a mess, and last week, Ryan Tannehill. Meanwhile, Aaron Rodgers has excelled in domes this season: 3-0 with 12 touchdowns, zero interceptions and 73 percent completions. Overall, Rodgers is the highest-graded QB in the NFL this season per Pro Football Focus.

This is a huge step up in class for the Colts defense, and as long as Davante Adams is healthy (ankle) and Allen Lazard returns for the first time since week 3, the Packers offense will be at full strength.

IN TUA WE TRUST?

The Dolphins have won and covered five straight, so the price is a little inflated; the look-ahead line had this at pick ‘em. Still, it’s difficult to make a case for the Broncos here, with a dinged up Drew Lock and a toothless defense that had zero QB hits on Derek Carr last week despite the Raiders being down both starting tackles.

Miami’s run defense has slowly improved, and it gets back Christian Wilkins from the COVID list. Teams can run on Miami, but the Dolphins' hot starts – an NFL-best +74 first half differential – have forced opponents to pass, where Xavien Howard (five interceptions, tied for second most in the NFL) lays in wait.

Weather won’t be a factor, but this will be Tua’s most difficult test. Can he get a defensive or special teams game-changing play for the fourth straight game?

UGLY SANDWICH SPOT OF THE MONTH

We’ve been telling you for weeks the Ravens offense is in a funk, although you can’t blame them for sputtering in a monsoon in New England.

The Ravens had 530 yards and 29 first downs in the playoff loss to the Titans, so they should snap out of their 2020 malaise against Tennessee this week. But now, the defense is the problem.

Calais Campbell and Brandon Williams (hurt after five snaps last week) are injured, and hadn’t practiced heading into Friday. That’s bad news for a run defense that gave up 173 yards on the ground to the Patriots without them last week.

Tennessee has beaten Denver and Minnesota on the road by a combined three points; they lost their only other road game to the Bengals by 11. Tennessee had seven starters out of Thursday’s practice, and this is a sandwich spot with an enormous game looming next week against the Colts. That’s a rematch maybe for the division.

It's a really tough matchup, so I'm going to pass.

YOUR TRAVEL SPECIAL OF THE WEEK

The schedule-makers must have had it out for Sean McVay. This is the Rams' fifth trip to the East Coast this season. This time, they’ll do it without the heart and soul of the team, veteran LT Andrew Whitworth.

The Rams struggled in the second half without him versus Seattle, totaling just 21 yards on their final three drives while clinging to a lead. The Bucs defense is second in pressure rate and second in blitz percentage, so it could be a long night for Jared Goff, who historically has struggled against pressure (see the Miami game from last month).

If there’s any concern about Tampa, it’s the night game factor. They’re 0-3 against the spread at night this season, with losses to the Bears and Saints, and a non-cover against the Giants.

Last year, when Drew Brees went down, Teddy Bridgewater got the start, and went 5-0 and 5-0 ATS. I wasn’t sure if Jameis Winston was capable of doing that, given his turnover history.

And now, Sean Payton is rolling with Taysom Hill, a wild card who has thrown five passes this season, and just 18 in his NFL career.

True, Atlanta probably won’t be able to run on this stout Saints defense. But the Falcons are expected to get leading receiver Calvin Ridley (43 receptions, 6 TDs) back from injury.

Add it all up, and there's just too much uncertainty here. Pass.

Two weeks ago, the Steelers went to Dallas, and I gave you the ghastly numbers: Mike Tomlin does not do well as a big road favorite, standing at 1-10 ATS as a double-digit favorite on the road vs losing teams.

Before you hit me with “sample size,” there’s this: Tomlin’s 15-29-1 ATS on the road versus teams under .500 no matter the spread. He’s just not a coach who can get his players up for lousy opponents.

But with all that said, the Steelers face a QB in Jake Luton who performed well versus a bad defense (Houston) and then poorly against an average defense (Packers), as he was sacked three times and hit four times versus Green Bay. That might be the first quarter against the Steelers.

Jacksonville’s two best rookies, starting CB CJ Henderson and WR Laviska Shenault, aren’t expected to play. Pittsburgh has a rematch next week with rival Baltimore, adding to the potential of overlooking an inferior opponent. Not this time. Pick: Pittsburgh -10.

HOLD YOUR NOSE PLAY OF THE WEEK

Historically, Mike McCarthy has been fantastic off a bye – 11-3-1 ATS in his career. But most of that was with Aaron Rodgers and Brett Favre. This week, the Cowboys get Andy Dalton back, which is an upgrade, but not quite Rodgers or Favre.

The Vikings, on the other hand, are off short rest, having beat the Bears on MNF. Minnesota’s game plan is simple – run Dalvin Cook through a Cowboys defense that has been hit-and-miss: Washington rushed for 208 yards, while Pittsburgh only managed 46.

Dallas finally has healthy linebackers, but this week its defensive line was hit with an illness, and it’s unclear if Randy Gregory or DeMarcus Lawrence will play.

Still, this feels like too big a number for the Vikings to be favored by. Three weeks ago they were a touchdown underdog in Green Bay. Now they’re a TD favorite over Dallas?

The Cowboys have gradually improved since Dak Prescott went down, losing by 28 to Arizona, 22 to Washington, and then being competitive in a loss at Philly and nearly stunning the Steelers. Give me Dallas.

Seahawks Crush Eagles As Wentz Struggles
A late Hail Mary couldn't help the Eagles, even if it spelled a backdoor cover. Is it time for Philly to make a QB change?
34 mins ago

Club Shay Shay Reaches Major Milestone
Shannon Sharpe wants to thank you, the fan, for the club's incredible growth, as we share some of the best moments so far.
2 hours ago