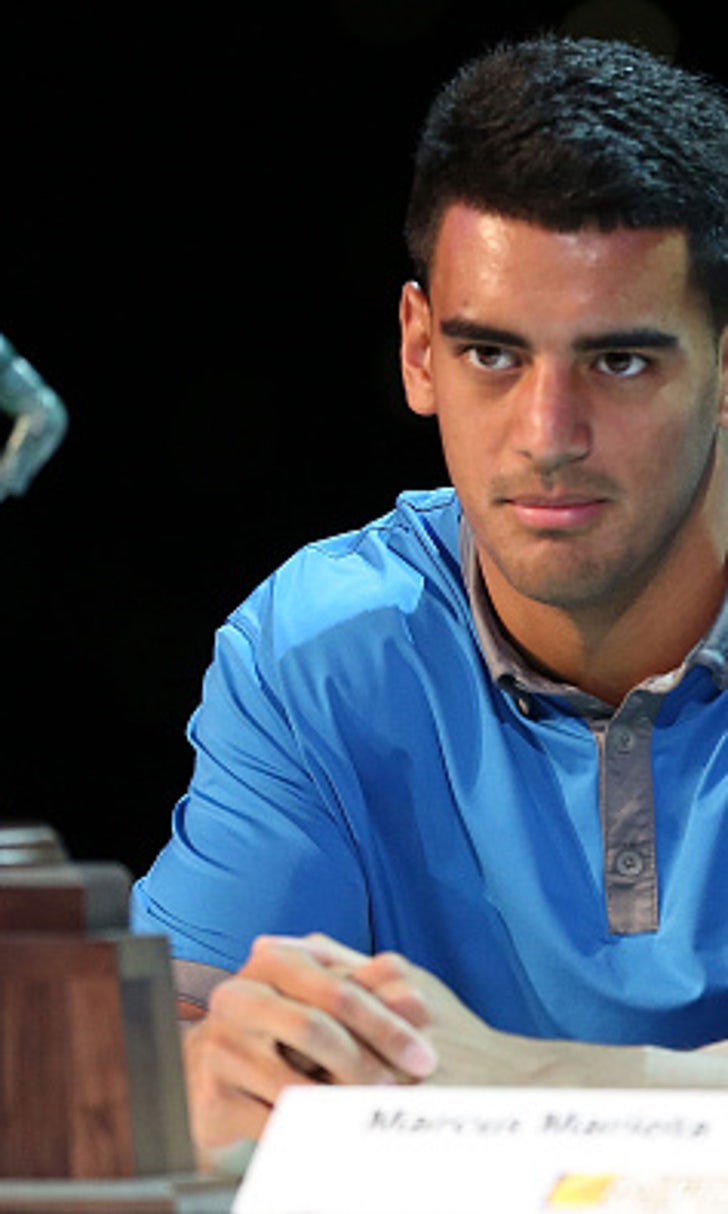 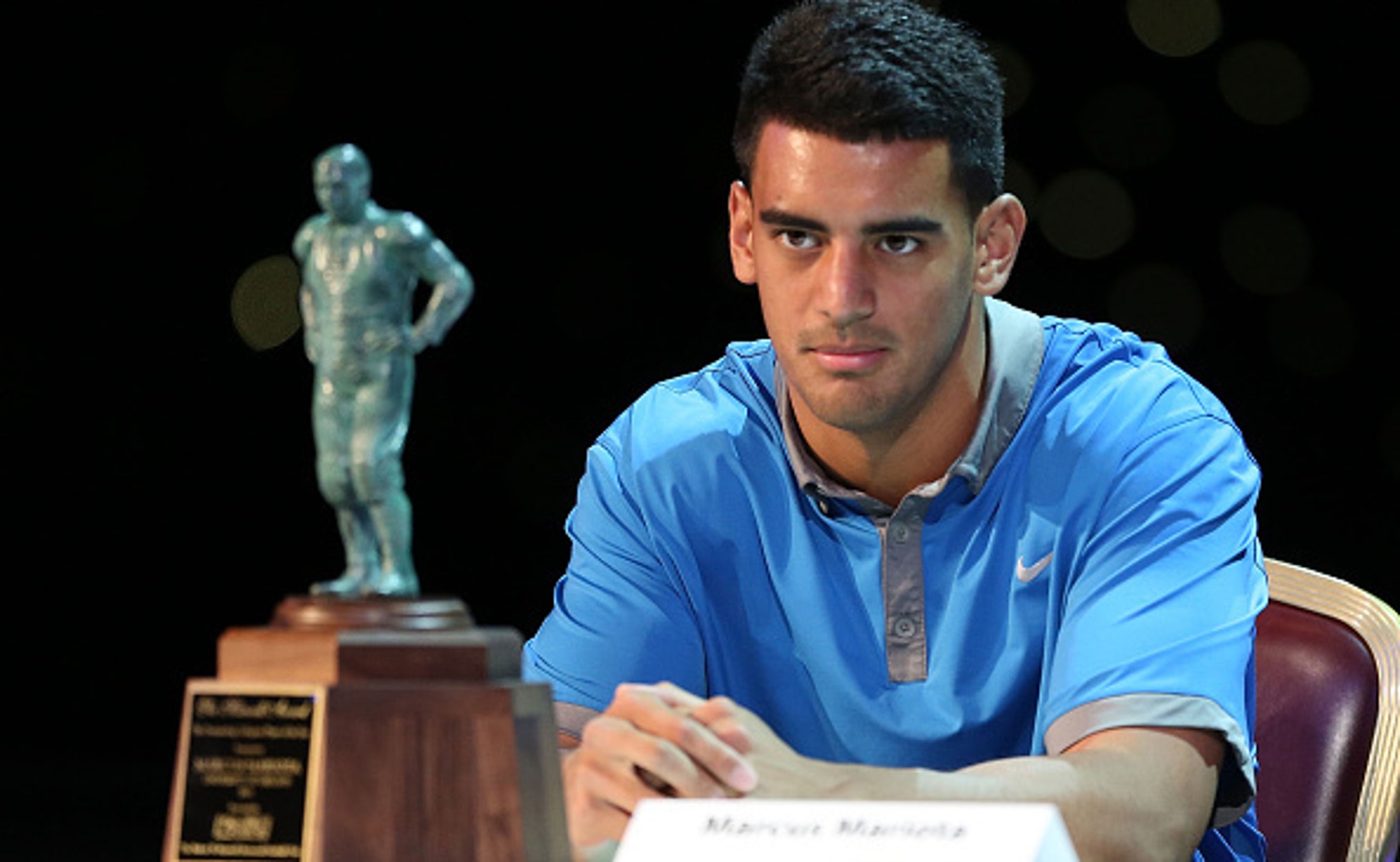 The five most likely landing spots for Marcus Mariota 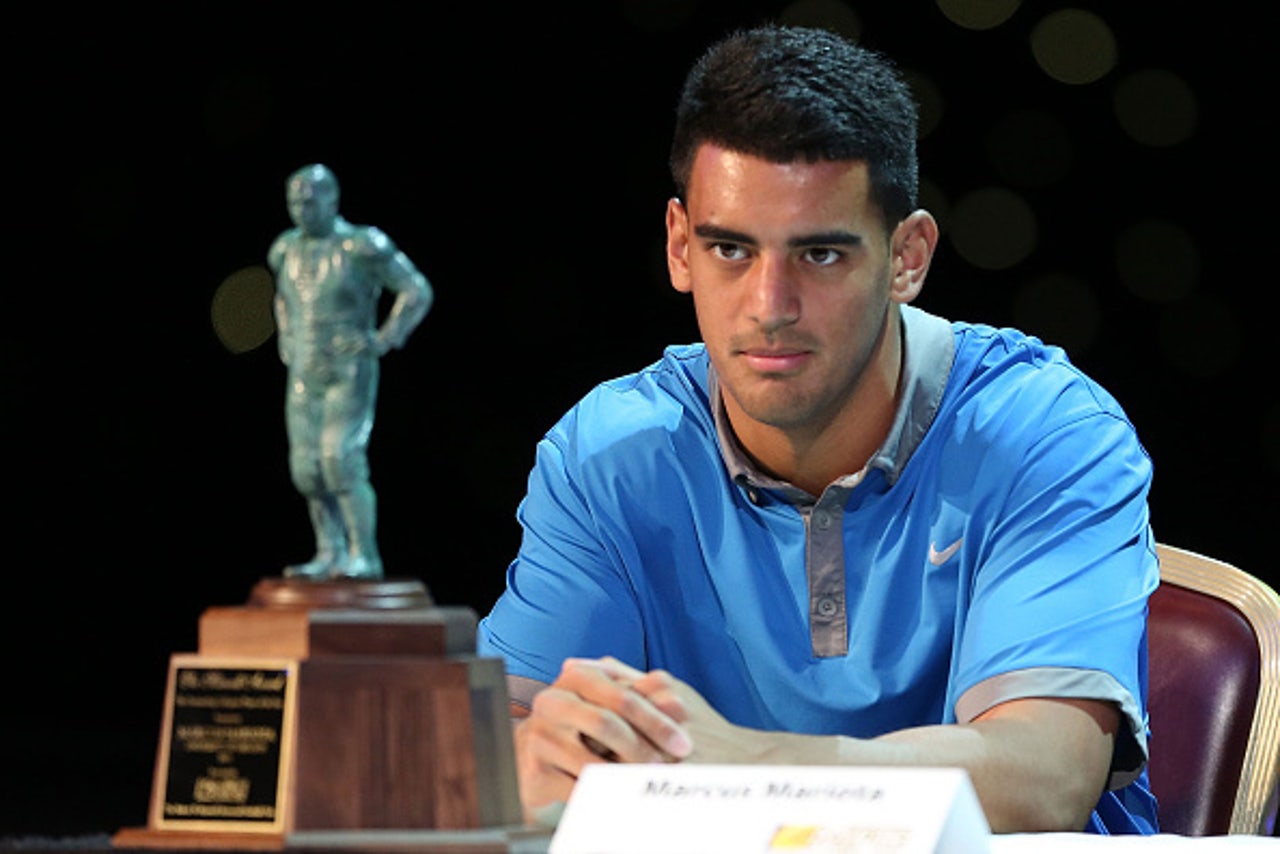 The fun part of the NFL draft this year is that we have almost no idea what’s going to happen in the top 10. Just a couple weeks ago, it seemed a near guarantee that the Tampa Bay Buccaneers would select Jameis Winston with the first pick. Now, about two weeks from the draft, that’s no longer etched in stone.

Even more interesting, the Marcus Mariota situation seems to be capturing the attention of the football world. Once considered the top prospect in the draft, this former Heisman winner has seen himself subject to over-analysis from some of the top critics in football. It’s being said he could go anywhere from No. 2 overall to the middle of the first round. This has led to speculation that numerous teams are looking to trade up for the ultra-athletic signal caller.

Here are the five likeliest landing spots for one of this draft’s most interesting prospects.

It might not make a lot of sense that a team selecting 20th overall would be the likeliest landing spot for the reigning Heisman winner. That’s until we realize Chip Kelly is attempting his best poker face in the public eye while still working behind the scenes to acquire his former quarterback at Oregon.

With a carrot to dangle in the form of Sam Bradford, the Eagles are in prime position to move up and nab Mariota. Whether the team decides to offer up the house to Tennessee for the quarterback or wait to see whether he falls outside of the top five, there’s little doubt that Philadelphia is going hard after him.

The scenarios are seemingly endless here. Philadelphia has been rumored to be interested in trading the newly acquired Bradford, potentially even to the Browns. That would enable the team to offer up the 19th and 20th picks as well as a player (maybe Brandin Boykin) for Tennessee’s pick. Another option would be working directly with the Titans to see if they want Bradford in a potential draft-day trade scenario.

Personally, I think Tennessee would be foolish to stand pat at two and select Mariota. It has a need at defensive tackle, and Leonard Williams is by far the best overall player in the draft. Heck, trading the second pick to the San Diego Chargers for Philip Rivers would make more sense than drafting Mariota. The reasoning here is simple. Tennessee already possesses a high-upside young quarterback in Zach Mettenberger. Why go after a more unproven player in Mariota when value dictates otherwise? Recent reports also suggest that the Titans’ brass likes what it sees from Mettenberger.

With that said, the Titans are either playing one of the best smokescreen games in recent league history or are interested in drafting Mariota. It’s possible that the team’s brass has a much higher opinion of Mariota than Mettenberger. If so, it will likely pull the trigger at two.

Sitting at six, it has to be almost a foregone conclusion that the Jets would select Mariota there should he fall out of the top five. With Ryan Fitzpatrick, Geno Smith and Matt Simms on the current roster, it doesn’t take a quarterback guru to understand what the Jets have here.

The simple fact that this team was able to add talent up and down the board on both sides of the ball in free agency indicates that the team could target a player that’s not necessarily a Day 1 starter. It would also be a tremendous fit for Mariota. Ideally, the Oregon product would be able to sit for a year or two to learn the nuances of the offense and the speed of the NFL game.

There have been rumors floating around that Chicago might be open to trading Jay Cutler to the Tennessee Titans in a trade-up scenario that affords John Fox and company the right to select Mariota with the second pick. As far-fetched as this might sound, especially from the Titans perspective, the Bears need to seriously consider moving on from Cutler in the not-so-distant future. He leads the NFL in turnovers over the past two seasons, and simply hasn’t seen his on-field production live up to the talent that made him a first-round pick.

Slated to pick seventh overall in the draft, it would be a minor miracle if Mariota fell to the Bears. Tennessee, Washington and the New York Jets are all said to be targeting the Heisman Winner. And with a staggering amount of teams potentially looking to trade up for his services, John Fox and company would have to out-fox others in order to nab the Oregon product. The idea of potentially giving up multiple picks for a quarterback when the Bears need a ton of help on defense, isn’t necessarily an ideal scenario. That’s only magnified by the presence of a defensive-minded head coach in John Fox. This leads me to believe Mariota will not land in the Windy City.

This would take the cake as one of the all-time dumbest moves in NFL history. Just four years removed from yielding multiple picks in a trade up for Robert Griffin III, the Redskins are seriously considering blowing that entire situation up. Talk about a knee-jerk reaction to what is an admittedly bad situation.

If anyone thinks the Redskins wouldn’t seriously consider taking Mariota at five, they surely haven’t paid attention to how this team has been led by owner Daniel Snyder over the years. Favoring the splashy move over smart football-related moves, Snyder’s Redskins have been a dumpster fire in the player personnel category for the better part of the past decade.

Is Mariota a better quarterback than RGIII? We have absolutely no idea. Will he add more to the table in 2015 than RGIII? That’s highly unlikely.

No matter our personal thoughts on whether Washington should make a move for Mariota, it’s a distinct possibility right now. If it does, just watch the fireworks in the nation’s capital come training camp.

Herd Hierarchy: Week 12
It's a bloodbath in the latest "Herd Hierarchy," where Cowherd has tossed out four top 10 teams from last week.
1 hour ago

Josh hits the Jackpot
Josh from South Carolina, along with seven other Super 6 players, won Terry Bradshaw's $1 million prize on Sunday.
17 hours ago

Keep It A Buc
After another shaky performance from Tom Brady, the Buccaneers might have to face some hard truths about their star QB.
21 hours ago

How Jimmy Johnson's Cowboys Ate Up The NFL
Jimmy Johnson and Troy Aikman enjoy a nostalgic and festive conversation ahead of the Cowboys' annual Thanksgiving Day game.
23 hours ago

MVP Watch: Mahomes Running Away
After another epic outing, Patrick Mahomes is tightening his grip on a second MVP award. Is it his to lose?
23 hours ago
those were the latest stories
Want to see more?
View All Stories
Fox Sports™ and © 2020 Fox Media LLC and Fox Sports Interactive Media, LLC. All rights reserved. Use of this website (including any and all parts and components) constitutes your acceptance of these Terms of Use and Updated Privacy Policy. Advertising Choices. Do Not Sell my Personal Info