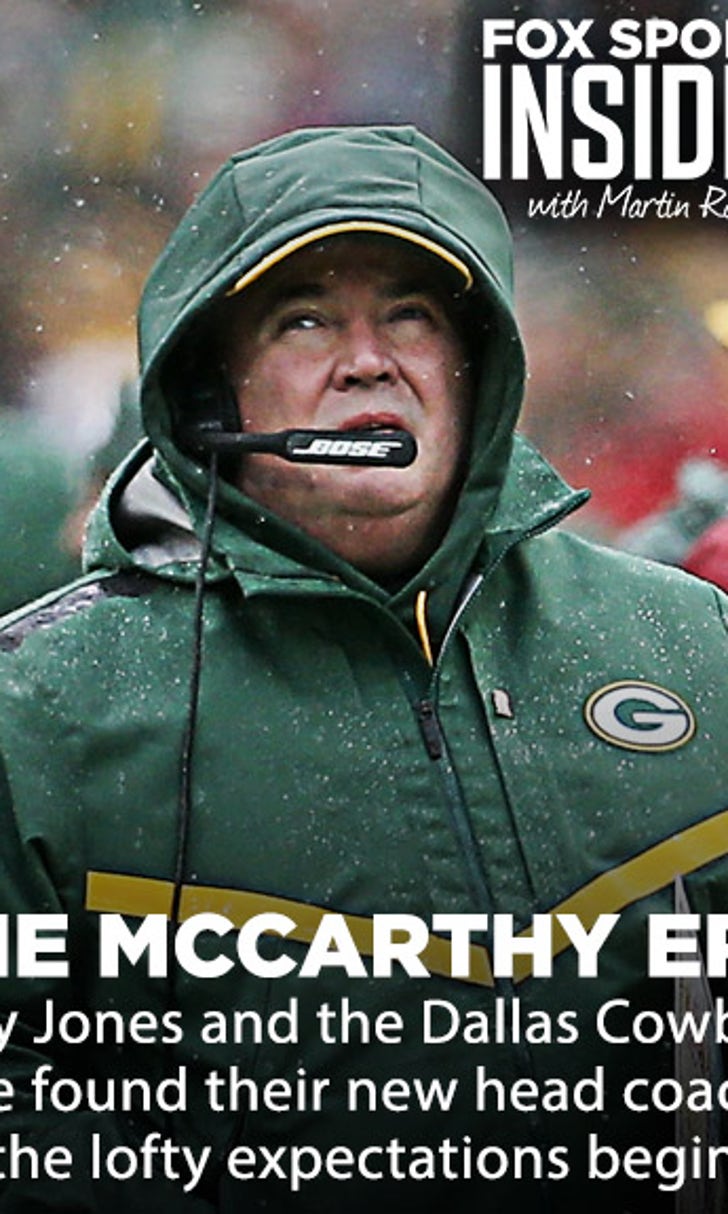 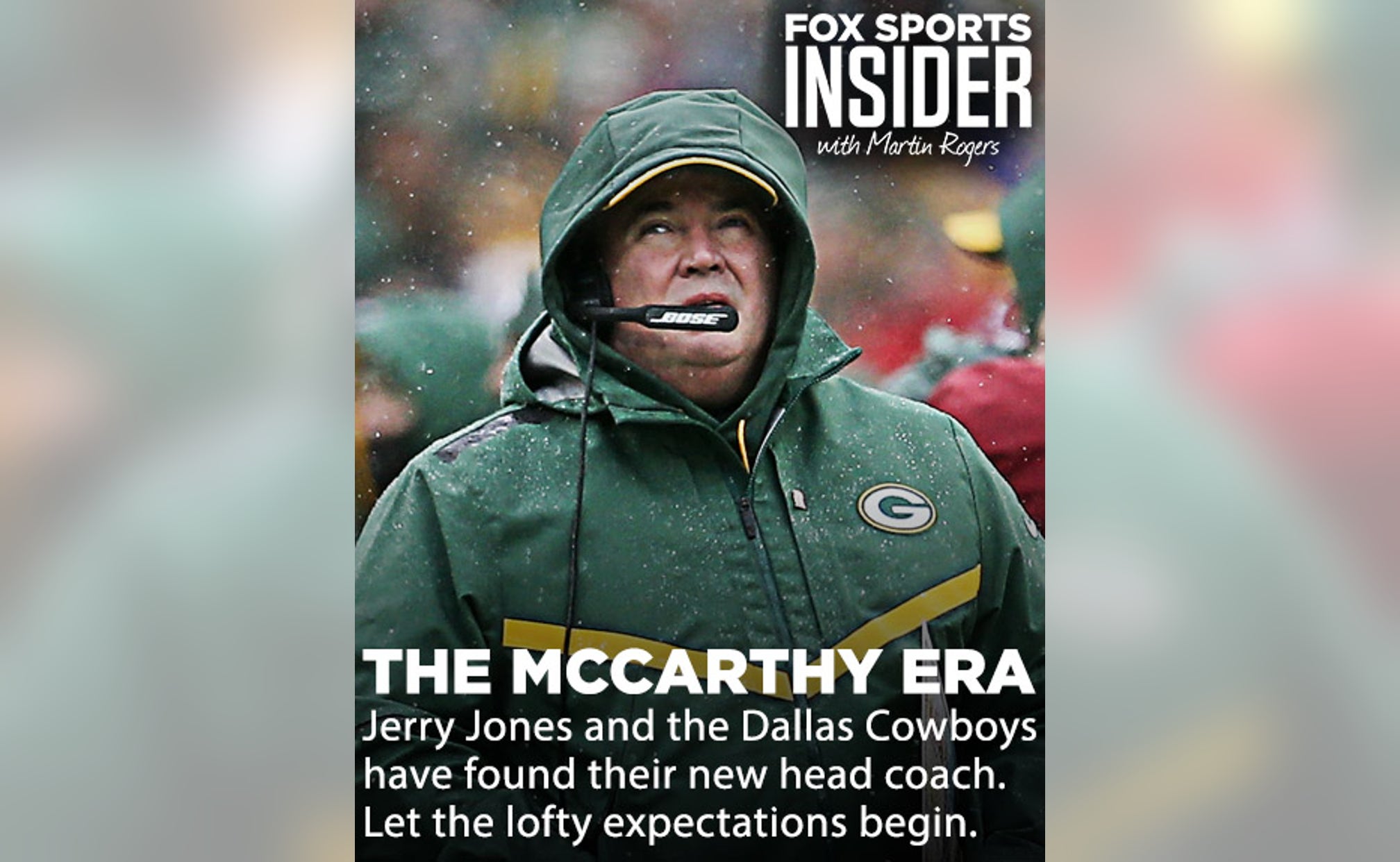 previous story
Plawecki would earn $1.15M with 350 plate appearances
next story
Rich Hill can earn up to $9.5M in bonuses from Twins

The Cowboys have lassoed Mike McCarthy as their new head coach 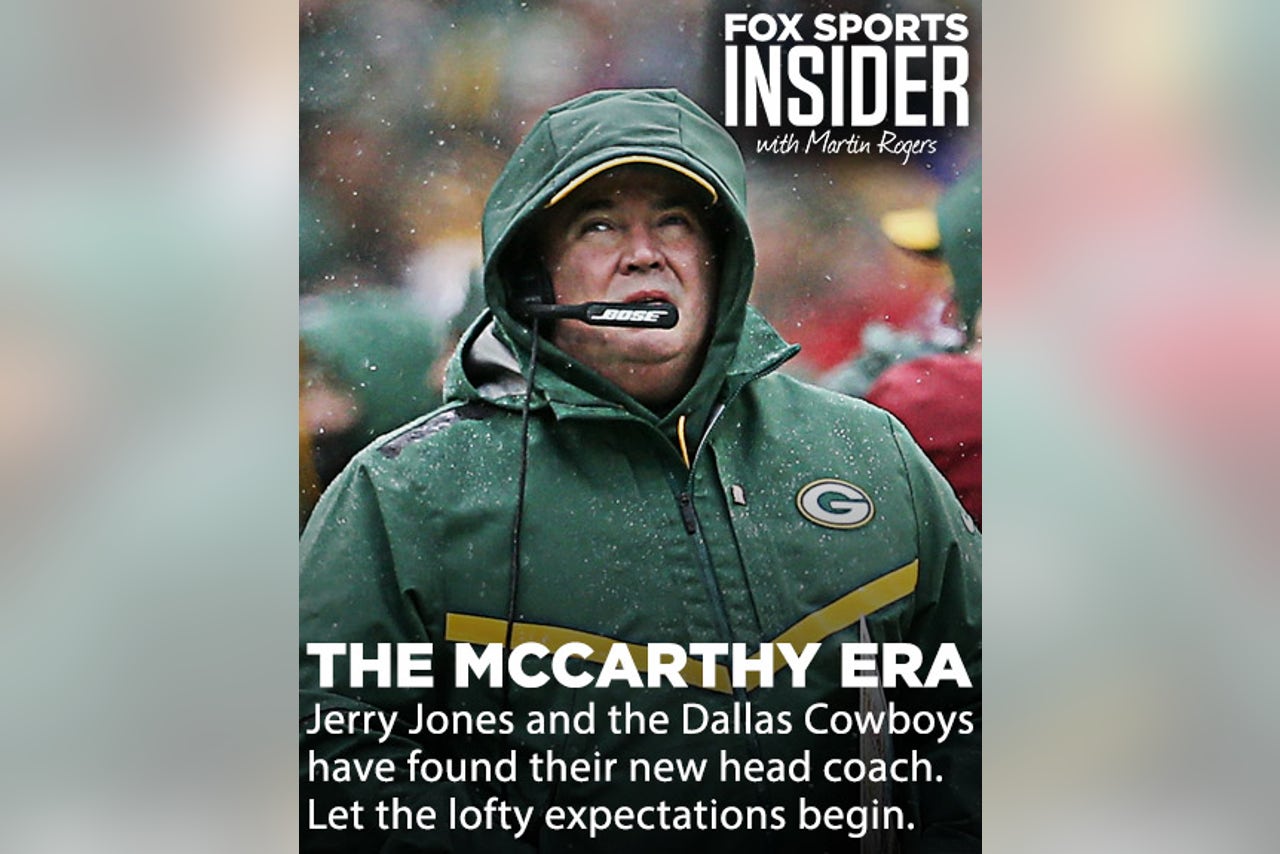 Forget about Jerry Jones having made the safe choice in tagging Mike McCarthy as his next head coach. Safe choice? There’s no such thing when it comes to the Dallas Cowboys.

It is little wonder Jones took longer than some would have liked in offloading Jason Garrett and then plumping for McCarthy, a former Super Bowl winner coming off a year out of the game.

When the Cowboys are involved, no matter what other machinations rumble through the National Football League over the coming months, this is the decision that will be scrutinized more than any other.

Yet whatever was being said elsewhere, Glazer told Colin Cowherd on The Herd, Jones was certain he had found the guy to finally fulfill the undoubted potential on the Cowboys’ roster.

“They wanted NFL head coaching experience,” Glazer said. “They didn’t want someone with college experience. The more they did research on Mike McCarthy, the more they started to fall in love with the grunt that is Mike McCarthy. He is a football guy.

“There is such a difference between him and Jason Garrett. Garrett is a Princeton guy. McCarthy is just a Pittsburgh guy. The way he went in there and explained how he would run their team ... the interview went so well they kept him there into a second day.”

Dallas is coming off a frustrating 8-8 season that saw the team miss the playoffs despite having headed into the campaign as a presumed Super Bowl contender — and despite the weak competition in the NFC East. Dak Prescott, Ezekiel Elliott and Amari Cooper are a powerful triple threat on offense, but the team simply couldn’t get it done, week after week, as Jones’ ire grew.

After a solid start, 3-0 turned into 3-3. Then 6-4 turned into 7-8, by which time the injury-riddled yet feisty Philadelphia Eagles had taken control of the division and would go on to clinch a playoff spot.

That reality essentially sealed Garrett’s fate. Can McCarthy be the man to spark a turnaround?

The biggest plus on McCarthy’s resume is the most obvious. Nine years ago, he won a Super Bowl with the Green Bay Packers ... at AT&T Stadium, no less. That’s right: he had the finest moment of his professional life in the house that Jerry built.

Yet that fact is also McCarthy’s biggest potential knock. Despite his tenure in Wisconsin coinciding squarely with the Aaron Rodgers era, the head coach had nearly a decade to get his team back to the promised land and was unable to do so.

McCarthy came close, taking the Packers to the playoffs in eight straight years. It took an onside kick recovered by the Seattle Seahawks to tip them out of the biggest game in 2014-15 and there were four overtime losses in his trips to the postseason.

There was also a highly-publicized difference of opinion with Rodgers that first rumbled and then festered, despite both men keeping their issues essentially private. Missing the playoffs two years in a row ultimately doomed McCarthy in Green Bay, yet his reputation remained strong enough to push him to the top of the Cowboys’ thoughts.

Inevitably, however, not everyone who bleeds for Dallas will be on board with the selection, with some wishing for a riskier choice.

“I just don’t love it,” FS1’s Skip Bayless said on Undisputed. “I just can’t get excited about Mike McCarthy. I’m not saying it’s bad, because it’s not bad. Is he a dynamic leader? No. Is he a charismatic figure? Will he start a fire in my locker room? He is not that guy. What’s going on here? Jerry thinks they’re right on the verge of winning, so no Urban Meyer, no Lincoln Riley.”

It looked for a while like either Meyer, the college football coaching legend, or Riley, the much touted offensive wizard currently in charge at Oklahoma, could be Jones’ new pick — and just the ninth coach in Cowboys history.

However, after a long and drawn out farewell to Garrett, he decided that going outside of the league was too great a risk for a job that is a beast all its own. Garrett held the position for nine years and at times looked likely to break through, especially during 2014’s 12-4 season that ended against the Packers in the playoffs amid the furor of the infamous Dez Bryant catch/non-catch.

Mixed in, though, were simply too many disappointing seasons. McCarthy will inherit a roster capable of better than what it managed this year, but he will have to dispel some notions before success beckons.

“McCarthy was viewed as a successful coach to be sure, but not one to push the envelope or to bring imagination to his game plans,” Tim Cowlishaw wrote in The Dallas Morning News. “If you want to say he was Jason Garrett with a better quarterback, be my guest.”

However, appearances can be deceiving. Yes, Garrett was the Ivy Leaguer, but he never spoke particularly highly of the trend skewing heavily towards teams that invest in analytics. McCarthy might be old school, but during his year out of the sport invested thousands of hours into creating his own analytics department to fill what some saw as a gap in his coaching arsenal.

Jones is done with doing things on feel. He wants some level of certainty. During discussions, he undoubtedly found McCarthy’s data-driven approach reassuring.

Now, of course, because this is the Cowboys, guarantees do not exist. No job in football has a higher upside, or comes with as much pressure. After a troubled and tormented season, Jones was faced with a mighty decision, and the owner could surely use a W right now.

Whether he got one or not, only time will tell.

Rams Defense Dominates Brady On MNF
The clutch Brady of old was nowhere to be found Monday. Instead, Sean McVay's squad simply made the Bucs QB look old.
7 hours ago

Market Decline
Nothing seems to be trending in the right direction for Carson Wentz and the Philadelphia Eagles. Could a change be imminent?
12 hours ago

Sean Payton Is The NFL's QB Whisperer
Sean Payton has a body of evidence that suggests he knows exactly what he’s doing when it comes to the QB position.
13 hours ago

Commander in Chief
Mahomes and the Chiefs got their revenge Sunday, and proved that even a perfect game plan is not enough to stop them.
19 hours ago

Two-Horse Race
Geoff Schwartz says the Chiefs and Steelers have separated from the AFC pack, and he picks the horse to bet on in the NFC East.
19 hours ago
those were the latest stories
Want to see more?
View All Stories
Fox Sports™ and © 2020 Fox Media LLC and Fox Sports Interactive Media, LLC. All rights reserved. Use of this website (including any and all parts and components) constitutes your acceptance of these Terms of Use and Updated Privacy Policy. Advertising Choices. Do Not Sell my Personal Info