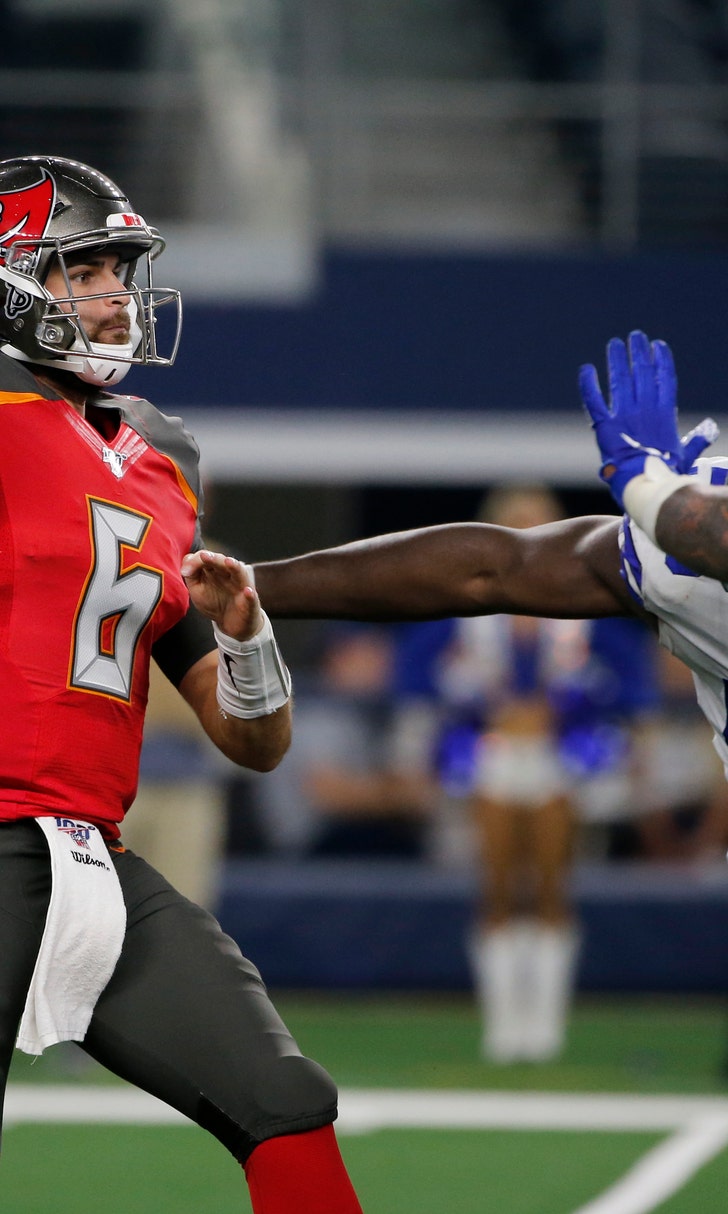 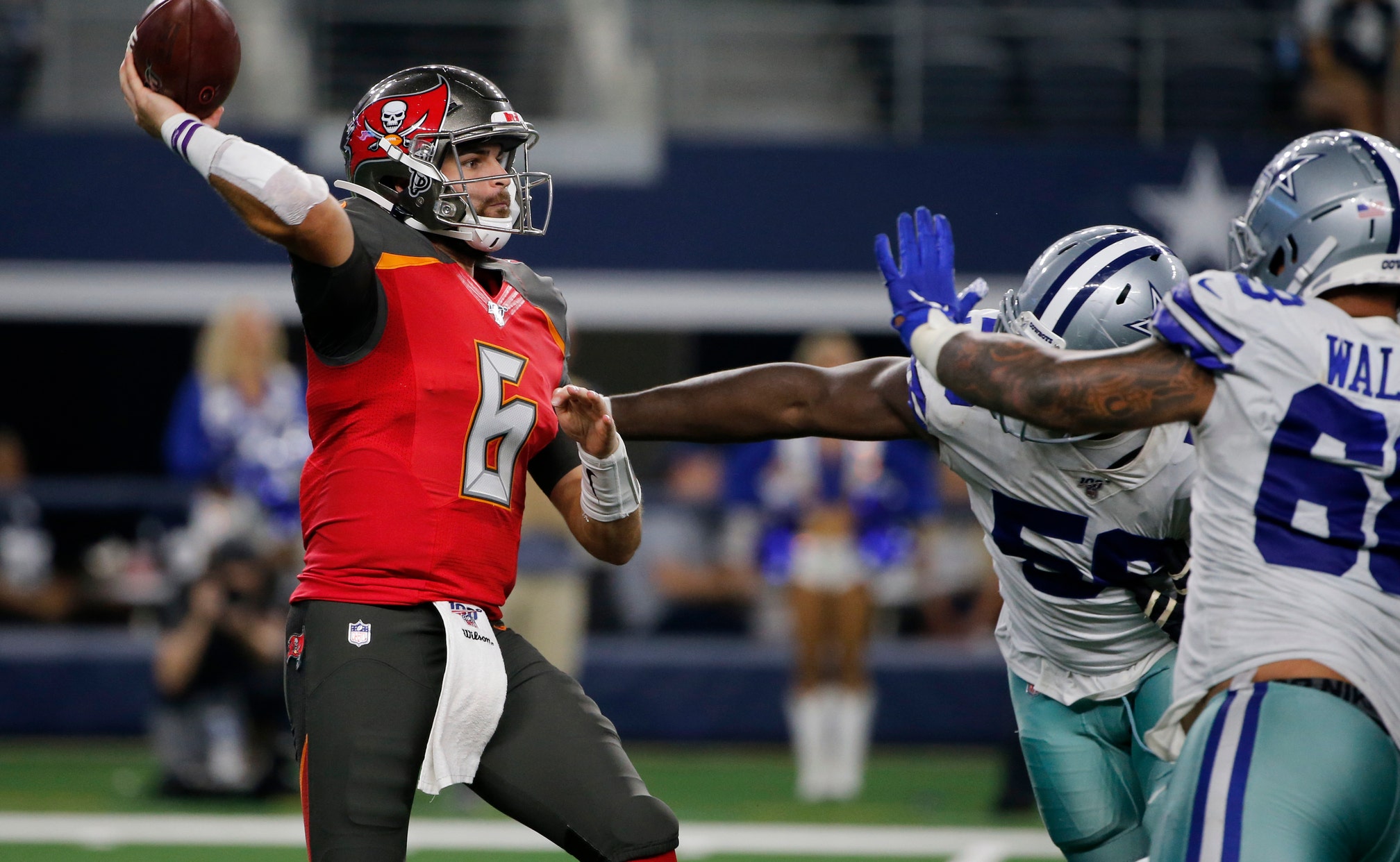 ARLINGTON, Texas (AP) — Vincent Testaverde's first NFL pass was badly overthrown on a simple toss in the flat, and the second was intercepted.

At least the son of Vinny Testaverde could say he played in a preseason victory for the team that drafted his dad No. 1 overall in 1987.

The younger Testaverde was part of a touchdown drive after Ryan Griffin threw a scoring pass in Tampa Bay's 17-15 win over the Dallas Cowboys in a preseason finale Thursday night.

"Fun. That's how I would describe the whole night," Testaverde said. "Shaky at first. I thought I bounced back. At the end of the day, we won, and I can't complain. I'm happy."

It was actually a matchup of two of Vinny Testaverde's former teams. He spent his first six seasons with the Buccaneers and is still the club's career leader in yards passing, although Jameis Winston should surpass 14,820 yards early in the season. The elder Testaverde spent one of his 21 seasons with Dallas, starting for the Cowboys in 2004.

The Cowboys pulled within two late in the fourth quarter on Jalen Guyton's 69-yard catch and run for a touchdown from fourth-string quarterback Taryn Christion. But Christion's 2-point conversion pass was incomplete.

Vincent Testaverde played most of the game because Tampa Bay wanted to protect Griffin as Winston's backup after Blaine Gabbert injured a shoulder in the previous exhibition against Cleveland. His TD drive was capped by Bruce Anderson III's 1-yard run.

"I can tell you it's more nerve wracking watching it than it ever was playing," said Vinny Testaverde, who was waiting outside the locker room to greet his son. "My stomach's still in a knot. The game's been over for an hour. And I'm just happy it's over. Glad he survived."

The younger Testaverde, who had been at the home of the Cowboys five years ago but didn't play for Texas Tech against Baylor, was 4 of 8 for 41 yards with a 25.5 passer rating. He transferred to Miami before finally getting a chance to play regularly at Albany last year.

Testaverde was a workout player for the Bucs in rookie minicamp before they brought him back early in training camp. Tampa Bay had to sign him again after Gabbert's injury, and give him a crash course in order to take most of the snaps against the Cowboys.

He entered in the second quarter and played the rest of the way. Testaverde likely won't make the 53-man roster, and the practice squad is probably a long shot also.

"The coaches after the game had told me they thought I did a really, really good job," Testaverde said. "That definitely made me feel good. If this is my last one, it's my last one. Not living with any regrets. Leaving the field, knowing that I did all I could."

Griffin was 9 of 11 for 92 yards with two interceptions, the first returned 26 yards for a touchdown by Donovan Olumba on a pass tipped by Jameill Showers. Testaverde's interception was rookie Donovan Wilson's third of the preseason for Dallas.

The Cowboys sat their top two quarterbacks in Dak Prescott and Cooper Rush, and Mike White didn't do much to displace Rush as the backup. The fifth-round pick from 2018 was 14 of 26 for 132 yards without a touchdown or interception.

Dallas kept three quarterbacks on the 53-man roster last year but doesn't seem likely to do that again. White is a candidate for the practice squad, although Christion's versatility could influence that decision after a spotty preseason from White.

With Ezekiel Elliott's holdout now in its second month, the Cowboys didn't play the top two running backs behind him. Rookie Tony Pollard's idle time cemented his status as the starter if Elliott, a two-time rushing champion, doesn't end his holdout before the opener. Pollard's backup is Alfred Morris, Elliott's primary replacement during a six-game suspension in 2017.

"There's no deadlines here with any of our contracts with our players," owner Jerry Jones said when asked if the end of preseason brought new urgency to Elliott's absence. "We'll be need Zeke any time we can get him out there. So we don't have deadlines here."

KICKS FOR THE BUCS

Rookie Matt Gay, a fifth-round pick, continued a strong preseason with a 53-yard field goal to put Tampa Bay ahead for good in the third quarter. Coach Bruce Arians has suggested he might keep two kickers, which would mean incumbent Cairo Santos could be used for shorter kicks.

How To Win $50,000 On Thanksgiving
As old rivals collide with first place in the NFC East on the line Thanksgiving Day, fans can win big – for free.
7 hours ago

The Story Of America's Team
Jimmy Johnson and Troy Aikman reflect on their Dallas dynasty ahead of the Cowboys' annual Thanksgiving Day game.
7 hours ago

Feasting On Wins In Week 12
From a Turkey Day teaser to all the wagers a bettor could want, Geoff Schwartz makes his picks for Week 12.
7 hours ago

Colts Win Thriller, Cowboys End Skid
Also, the Chargers held on for a much-needed win, and Tua Tagovailoa suffers his first loss as a starter.
3 days ago
those were the latest stories
Want to see more?
View All Stories
Fox Sports™ and © 2020 Fox Media LLC and Fox Sports Interactive Media, LLC. All rights reserved. Use of this website (including any and all parts and components) constitutes your acceptance of these Terms of Use and Updated Privacy Policy. Advertising Choices. Do Not Sell my Personal Info