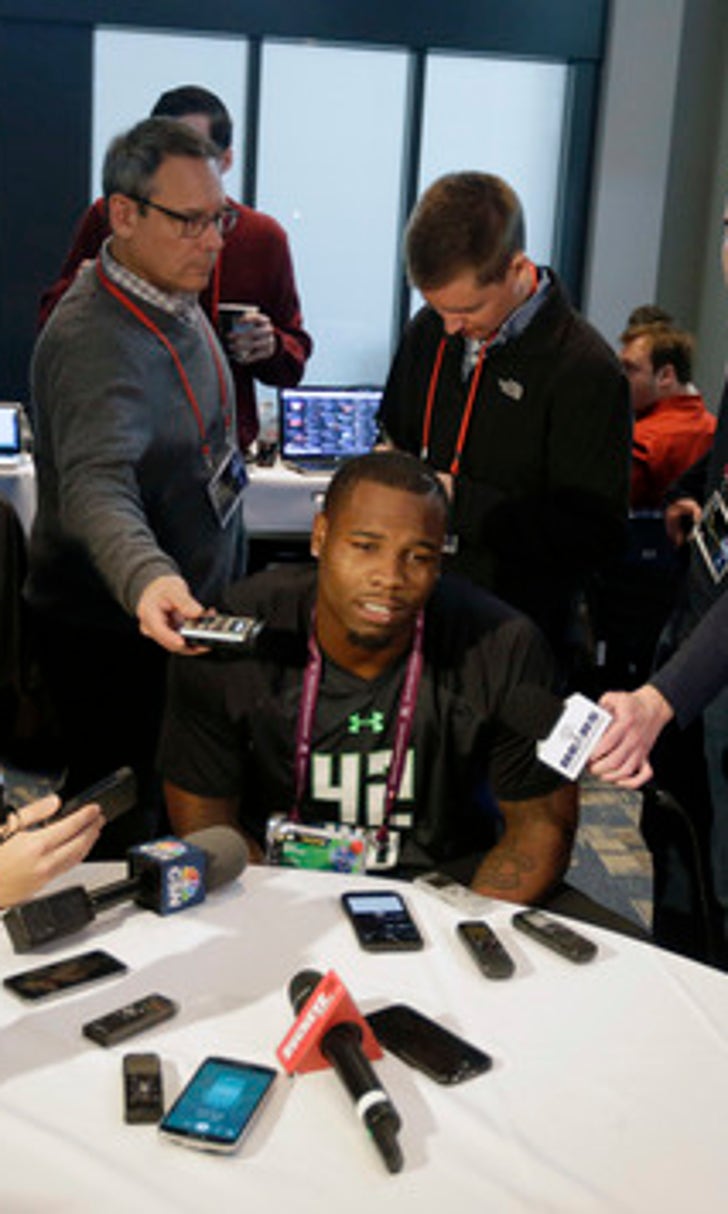 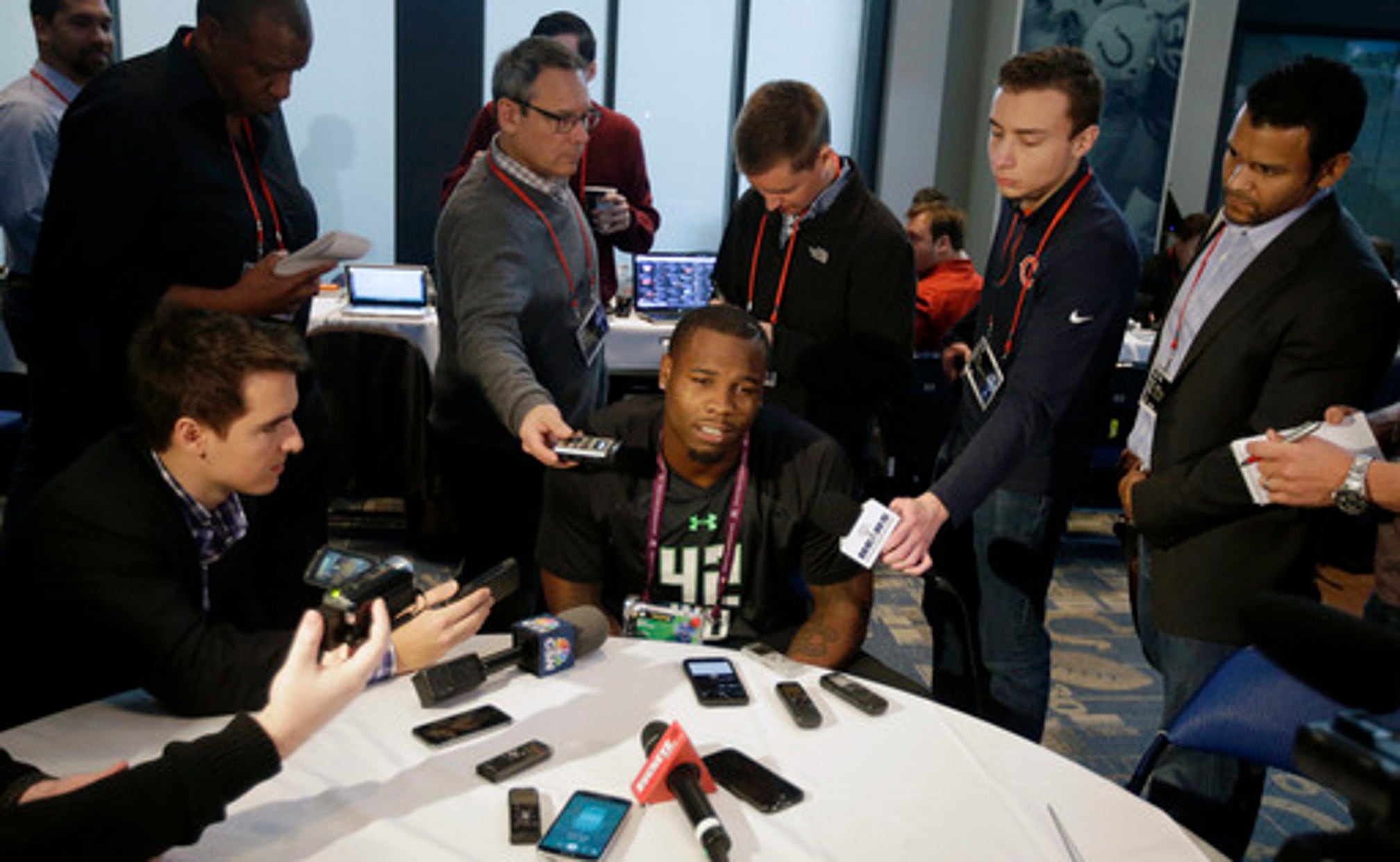 Some draft hopefuls have more to prove off field in Indy INDIANAPOLIS (AP) Duke Williams had something to prove this week in Indianapolis - that he has learned his lesson.

It's a job that will continue long after he leaves town.

Four months after being booted off the Auburn football team for allegedly hitting several people including a teammate during a fight, the humbled Williams was trying to take advantage of his invite to NFL's annual scouting combine by persuading someone, anyone, to give him a second chance.

At 6-foot-2, 229 pounds, Williams is a potential mismatch against smaller cornerbacks even though he ran a 4.72-second 40-yard dash Saturday.

But in Williams' case, and dozens of others, character could count more than numbers.

In an effort to avoid costly mistakes, team officials find ways to scrutinize everything in Indianapolis - interviews with teams, test scores, drills on the field, mannerisms off of it, even how they handle the media.

''The people that we or the public deems are busts in the league, 90 percent has to do with what goes on above the neck,'' said Tampa Bay Buccaneers general manager Jason Licht, who took Jameis Winston with last year's No. 1 pick. ''Whether it is a character issue or a mental issue, we put a lot of resources into that to find out about a player. You can't gauge that from watching them run around out there and do drills. It's mostly when you talk to them face to face.''

Regardless of how much research is done, though, decision-makers don't always get it right.

Cleveland gambled two years ago by using a first-round pick on the flamboyant Johnny Manziel. Instead of becoming a franchise quarterback, though, Manziel wound up in rehab and has had a rash of off-the-field problems. He is expected to be cut soon.

One thing that has become almost standard fare for team officials is asking players with checkered pasts how they've changed.

Michigan offensive lineman Graham Glasgow, who was arrested for drunken driving in 2014 and tested positive for alcohol a year later while still on probation, said he stopped drinking beer.

Team officials must then judge whether the answers are believable.

Not all infractions come under the same umbrella.

Offensive lineman Alex Lewis transferred from Colorado to Nebraska after being involved in a fight that left an Air Force cadet unconscious. Lewis accepted a plea deal that included a 45-day jail sentence and two years of probation.

A former teammate recently alleged Tennessee linebacker Curt Maggitt punched him in the mouth after the former teammate tried to help a woman who claimed she was raped by two other football players.

North Carolina State running back Shad Thornton was kicked off the team in September after being charged with failure to stop and render aid and failure to provide information after hitting a pedestrian while riding a moped. Previously, he had received deferred prosecution for a misdemeanor count of assaulting a female.

''There's a group of people I can't hang with,'' he said. ''I have to be more myself and stay away from that party scene. It was more like partying and going out. Every time I did it, it was me going out and partying.''

But for Williams, who was suspended for a 2014 bowl game and missed multiple practices because of an undisclosed ''discipline issue'' before the fight, there's far more uncertainty.

All he can do now is convince NFL decision-makers that he's turned his life around and hope someone gives him a shot in April.

''Plenty of nights I went to sleep and I cried, I really cried because I didn't just hurt myself, I also hurt myself my family, my friends, my teammates, coaches who gave me chance after chance. I hurt them,'' Williams said. ''So I had to really collect myself as a person because when I lost football I felt like I lost a lot of things. That's something I put my heart into, and just to lose it overnight, it wasn't worth it.''

Spitting Image
Sunday night proved that Kyler Murray is chasing Russell Wilson for the title of 'Best Undersized Quarterback' in the NFL.
5 hours ago

Like Fine Wine
Tom Brady's tearing up the NFL at age 43, and the Buccaneers' offense could be getting even scarier in the coming weeks.
6 hours ago