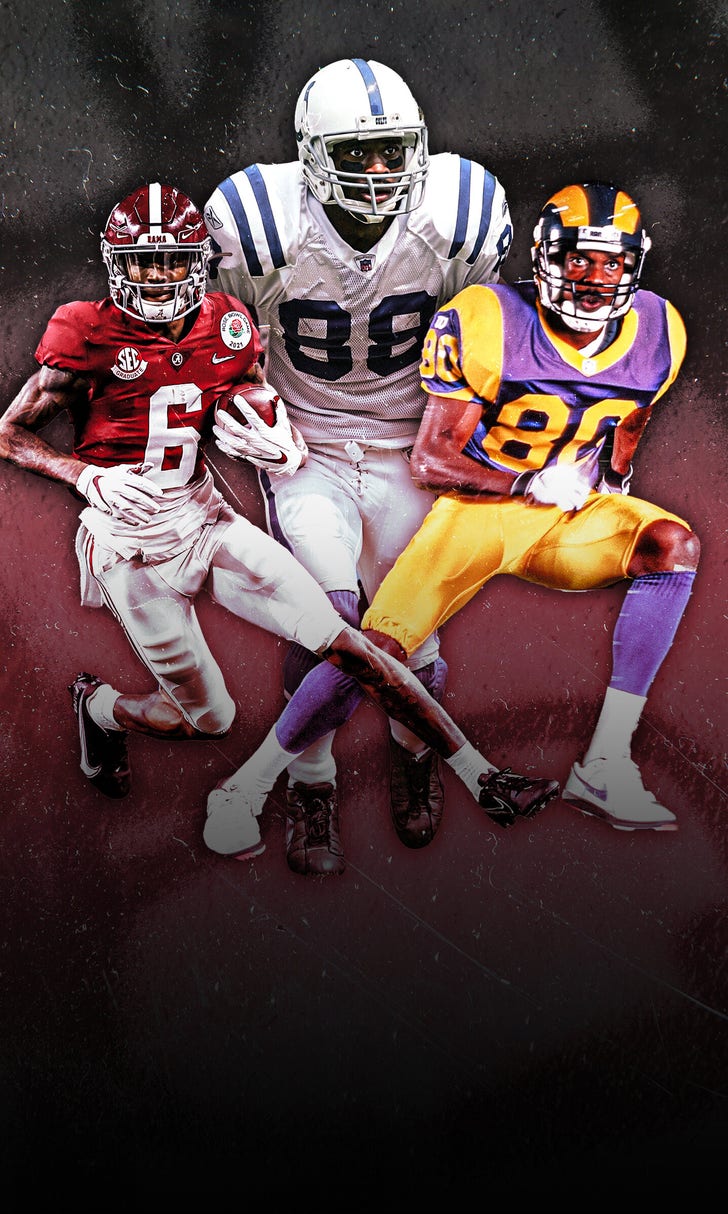 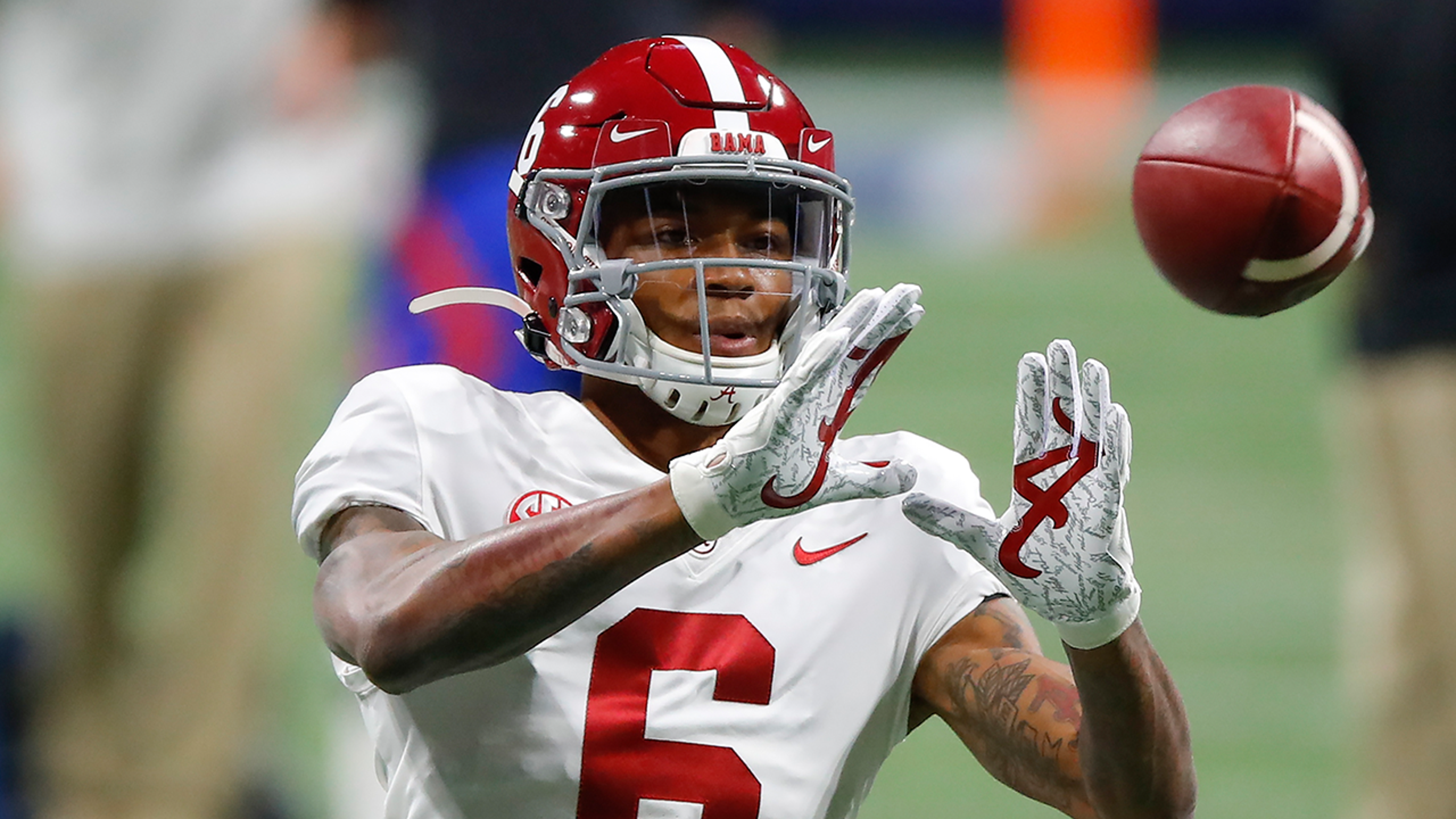 Alabama wide receiver DeVonta Smith has turned heads this season with his dazzling pass-catching and penchant for scoring touchdowns.

And now, with the Heisman Trophy in Smith's hands, pundits have turned their focus to his NFL potential.

Smith leads the nation in every major statistically category, including receptions (105), receiving yards (1,641) and receiving touchdowns (20).

Smith has dropped only two passes all season, and he's added a rushing score and a punt return for a touchdown to his resume. 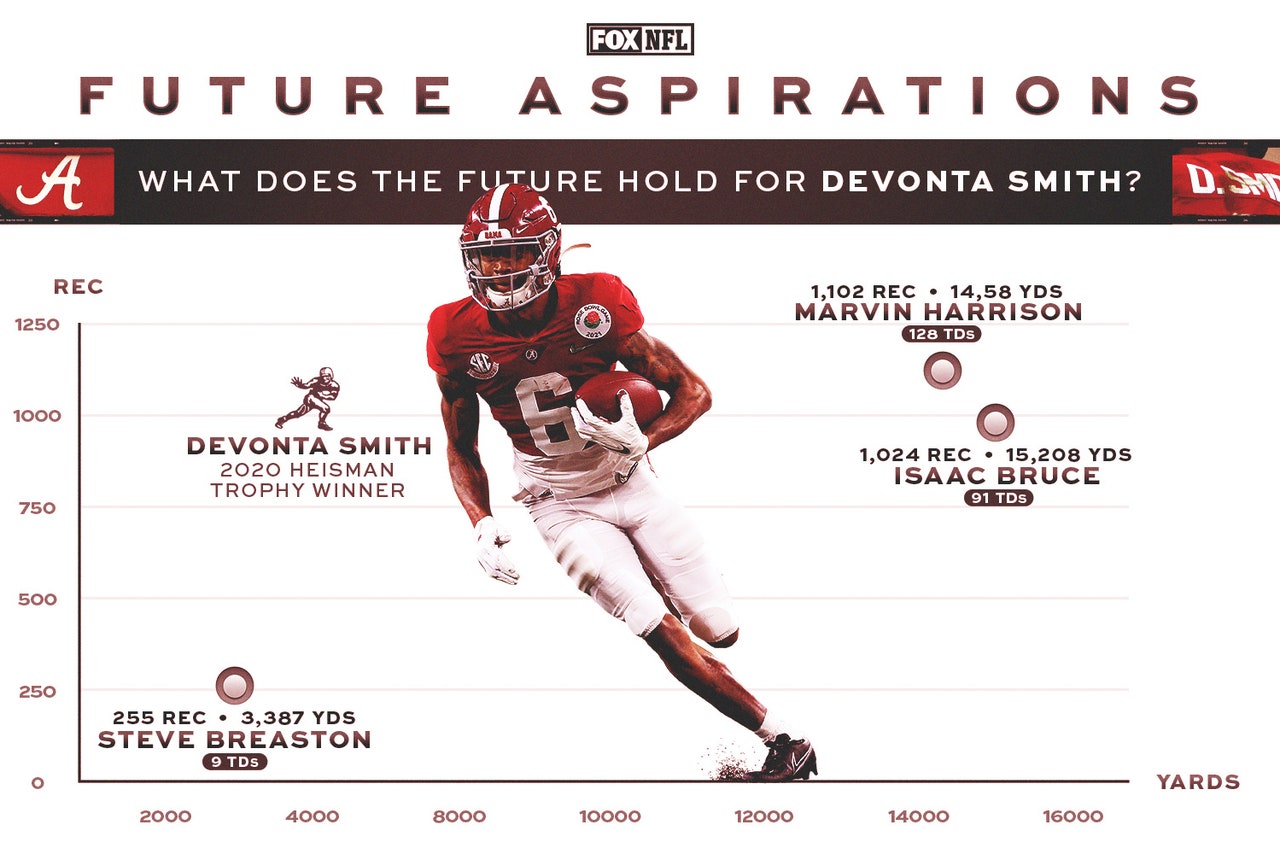 Smith’s soaring one-handed touchdown grab against LSU was just one of his many Heisman-worthy highlight moments, and it wasn't his first.

Smith carved out a place in Alabama’s storied history as a freshman, with the iconic, game-winning 41-yard touchdown pass in overtime against Georgia to earn the Tide the 2017 National Championship.

He is now headed into his third title game appearance (1-1), searching for another trophy after earning the honor of the best player in college football.

And during his acceptance speech, Smith shared a hopeful message for players who might be overlooked, as he was once disregarded due to his size, standing at just 6'1" and weighing 175 pounds.

But, because of his smaller build, route-running ability, and strong hands, Smith has had the pleasure of drawing comparisons to former NFL greats of similar size, outlined by Shannon Sharpe and Desmond Howard, the last receiver to win the Heisman Trophy, all the way back in 1991.

Let's see what's in store for Smith if he were to reach the heights of Isaac Bruce or Marvin Harrison, as well as one lesser-known wild card comparison.

In his 16-year career with the Los Angeles Rams (1994-2007) and San Francisco 49ers (2008-09), Isaac Bruce became legend via his route running, and he currently has the fifth-most receiving yards in league history.

In just his second season, Bruce earned a starting spot with the Rams and was the top receiver for the 'Greatest Show on Turf', totaling 119 receptions, 1,781 yards and 13 touchdowns in 1995.

He also produced eight 1,000-yard receiving seasons and 10 seasons where he racked up at least 60 receptions, and according to Sharpe, Smith could be on a similar trajectory.

"Smith's built of the right stuff. I think he can be a very, very good pro."

Marvin Harrison spent his entire career with the Indianapolis Colts, and quickly established himself as an elite receiver in the league.

Harrison held the record for most receptions in a single season (143) for over a decade, before it was broken by Michael Thomas (149) in 2019. Harrison is fifth all-time in career receptions and receiving touchdowns.

Harrison thrived alongside quarterback Peyton Manning in Indy, and he posted a streak of eight straight years with at least 1,000 yards receiving and at least 10 touchdowns. He also had four consecutive seasons with 100 or more receptions.

The last receiver to win the prestigious Heisman Trophy, Desmond Howard, also thought of Harrison when sizing up Smith on Wednesday.

"Reminds me of Marvin Harrison. He's really smooth. He's a technician when it comes to running routes. He's very hungry – he's a dog."

However, Howard had one more name in mind.

Steve Breaston heard his name called by the Arizona Cardinals in the fifth round of the 2007 NFL Draft.

In his first season in the league, Breaston racked up 1,786 return yards for the Cardinals.

In 2008, Breaston had a breakout campaign, starting nine games for Arizona and finishing the year with 1,006 receiving yards.

Lastly, similar to Smith, Breaston was also measured at 6'1", 175 pounds during his playing days.

"Stevie Breaston's body type – long and slender," said Howard of Smith. "They call him the 'Slim Reaper.' The sky is the limit for this young man. Just an incredible talent."

According FOX Sports analyst Jason McIntyre, Smith will be the sixth pick in the 2021 NFL Draft and is the top-ranked wide receiver in the draft class.

And if Sharpe and Howard are correct, the Hall of Fame is waiting.