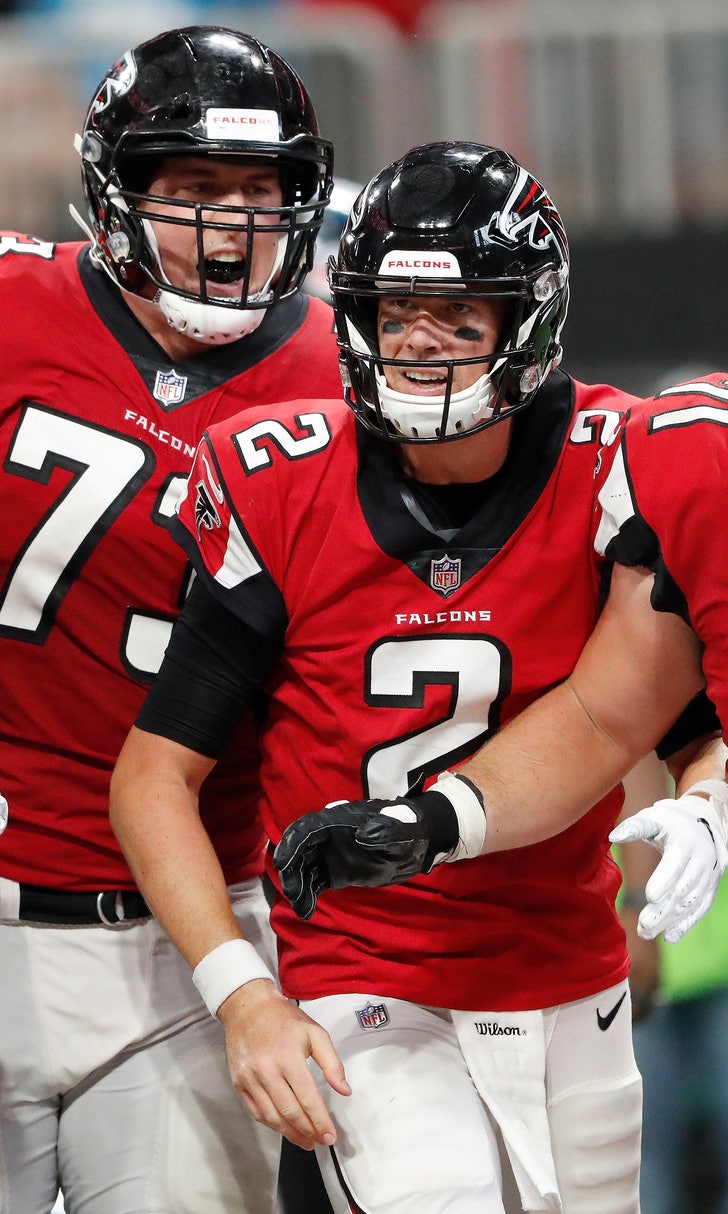 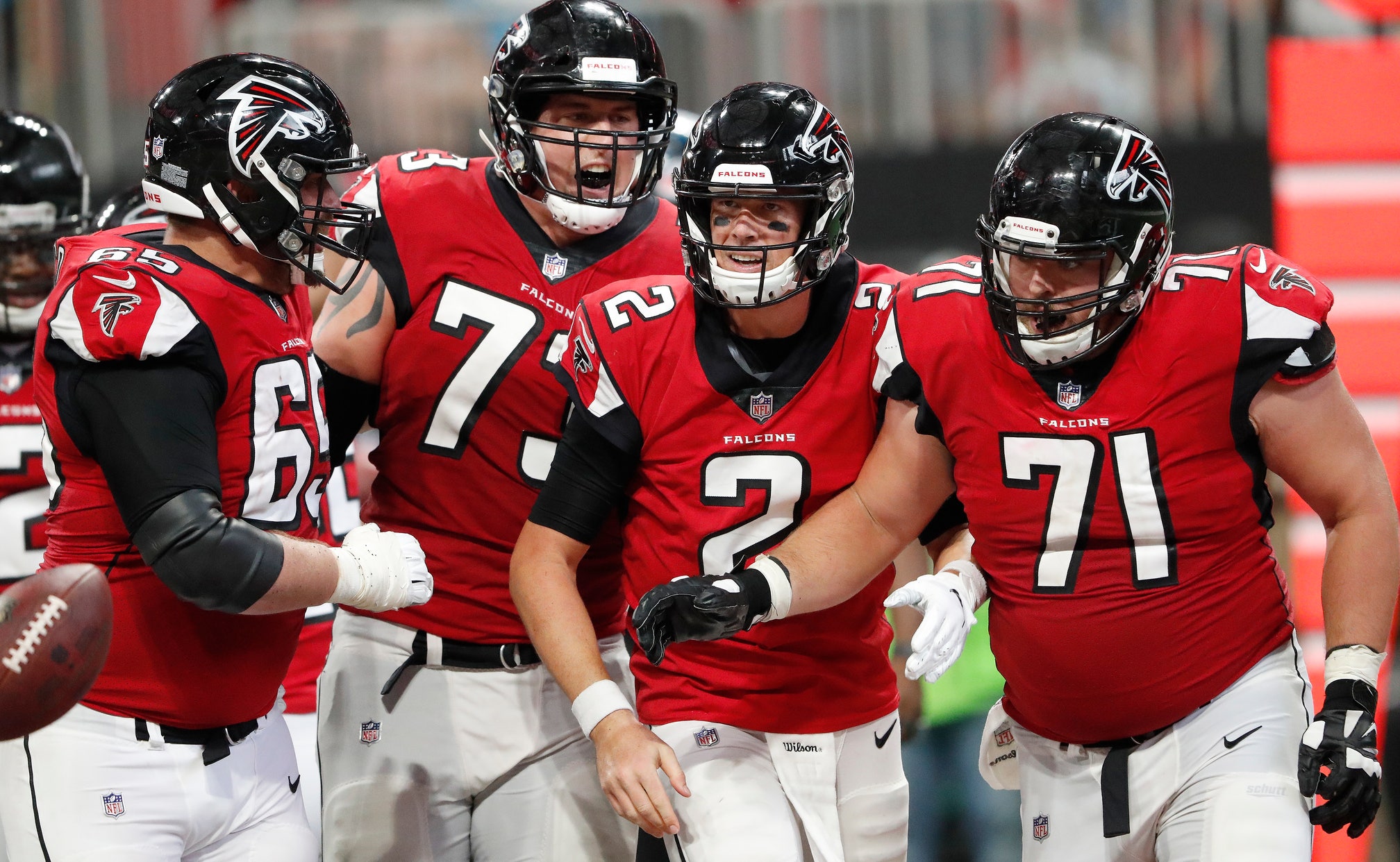 ATLANTA (AP) — The quarterback took off running, only to find three defenders waiting for him at the goal line.

No problem. He simply ran right over them.

Ryan threw a pair of scoring passes, which wasn't all that unusual, and also ran for two touchdowns for the first time in his career, leading the Atlanta Falcons to a 31-24 victory over the Carolina Panthers on Sunday.

"I can't remember the last time I had two TDs," Ryan said with a smile.

Newton was rocked early on by cheap shot from Damontae Kazee , who was thrown out of the game for the helmet-to-helmet hit while the Panthers quarterback was sliding at the end of the run. Newton was able to stay in the game, throwing a pair of touchdown passes, and he had one last chance to send the game to overtime.

From the Falcons 31, Newton lofted a pass into the end zone for D.J. Moore, who was double-covered and let the ball slip through his hands as time expired.

While Newton rushed for 42 yards, it was Ryan who had the most significant impact with his legs.

After scoring on a 1-yard sneak that pushed Atlanta (1-1) to a 24-10 lead early in the third quarter, Ryan delivered the biggest blow with a gutsy scamper midway through the fourth quarter. Looking to throw on third-and-5 from the Carolina 8, he spotted a running lane to the left and took off.

There were three Carolina players waiting for him at the goal line — including 346-pound former teammate Dontari Poe — but Ryan leaped in the air and bowled them all over , falling across the goal line for the TD that restored Atlanta's two-touchdown lead over the Panthers (1-1).

"I didn't want to slide in that situation or go down because you don't know where you're going to be marked," he said. "I felt something below my feet, and just went up the best I could. It was a good decision."

Ryan finished 23 of 28 passing for 272 yards, a performance that took some of the heat off offensive coordinator Steve Sarkisian. Roundly panned for his play-calling last season and in a season-opening loss to Philadelphia, he got a bunch of people involved.

Just like that, the Falcons resembled the high-scoring team that made it all the way to the Super Bowl two seasons ago with Kyle Shanahan as the coordinator.

The most telling possession for Atlanta came with the first half winding down. Ryan completed six straight passes to five receivers — none of them, amazingly enough, Julio Jones.

Tight end Austin Hooper had two catches for 15 yards, including an 8-yard touchdown with 22 seconds remaining that gave the Falcons a 17-10 halftime lead .

Backup receiver Marvin Hall had a 30-yard reception, while rookie Calvin Ridley hauled in a 22-yarder. The running backs also got into the passing game, with Coleman and rookie Ito Smith also making catches.

Ridley, a first-round pick from Alabama, had his first career TD on an 11-yard pass in the second quarter .

The Panthers were livid about Kazee's hit on Newton, who was sliding to the turf at the end of a 10-yard run. Kazee came at him helmet-first, snapping back Newton's head.

Carolina receiver Torrey Smith raced in to deliver a shot that sent Kazee to the turf, also drawing a personal foul penalty but not an ejection. Ricardo Allen jumped on top of Kazee to prevent any other Carolina players from going after him.

Newton was quickly examined and returned to the field without missing a play.

Afterward, he didn't seem too upset.

The Falcons ran the ball 32 times for 170 yards. They threw 28 passes for 272 yards, finishing with the second-most total yards (442) of Sarkisian's 20-game tenure. Even more important, they scored on all four trips inside the red zone, a longstanding issue.

This was the fifth time the Falcons have scored at least 30 points under Sarkisian, compared with 13 times in 19 games during the 2016 season. They have yet to score 40 points under their current coordinator; Atlanta did it six times in Shanahan's final season.

The injuries continued to pile up for both teams, which already were dealing with several missing starters.

Carolina had a pair of starters in the secondary go down: strong safety Da'Norris Searcy (concussion) and cornerback Donte Jackson (hamstring).

Panthers: Return home next Sunday to host the Cincinnati Bengals (2-0), who have 10 days to prepare after playing this past Thursday night.

NFL's Top Plays of Week 11
Follow along live with all of the action around the NFL, updating as it happens!
4 days ago

NFC South Rivals Meet Thursday Night
The Falcons and Panthers will finish off their division series tonight. Here's some insight on how to bet their matchup.
October 29
those were the latest stories
Want to see more?
View All Stories
Fox Sports™ and © 2020 Fox Media LLC and Fox Sports Interactive Media, LLC. All rights reserved. Use of this website (including any and all parts and components) constitutes your acceptance of these Terms of Use and Updated Privacy Policy. Advertising Choices. Do Not Sell my Personal Info