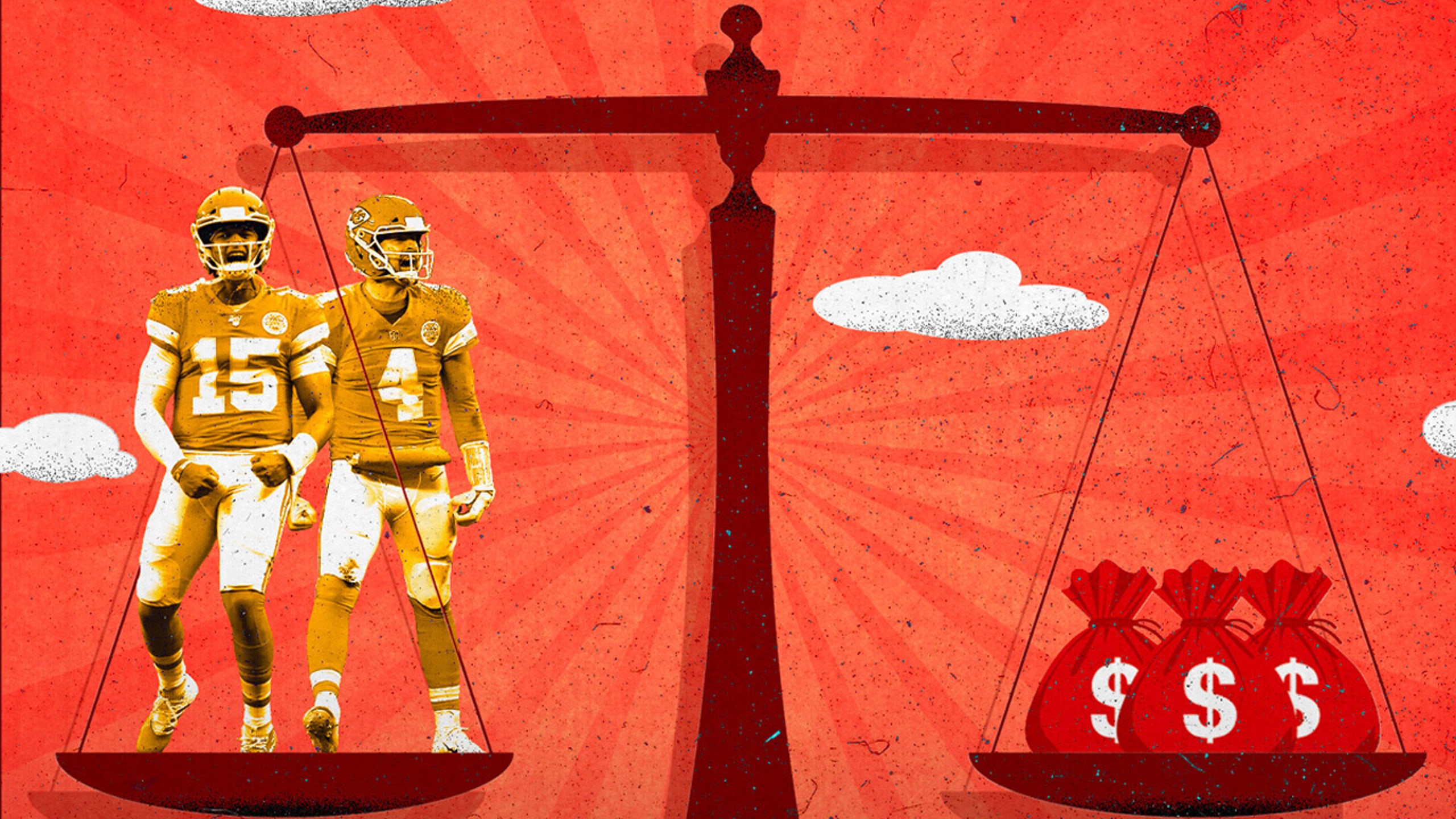 You could almost hear the collective gasps when Kansas City Chiefs superstar quarterback Patrick Mahomes exited last Sunday’s playoff game against the Cleveland Browns because of a concussion.

Mahomes kept the ball on a speed option run to the right and was met by Cleveland Browns linebacker Mack Wilson midway through the third quarter. Mahomes’ head and neck smashed into the ground at an awkward angle, and anybody watching the game live knew his afternoon was likely finished.

"Uh-oh," veteran play-by-play man Jim Nantz announced on the broadcast. "He is absolutely dizzy. You can see it in his eyes."

As Chiefs Kingdom panicked and pleaded for the health of its franchise cornerstone, oddsmakers were working to calibrate new in-game betting odds. Computing an immediate live spread without knowing Mahomes’ status is a literal guessing game. In that situation, a sportsbook has to do its best to balance liability, probability and uncertainty.

The live point spreads ranged anywhere from Kansas City -6.5 to -8.5 as backup Chad Henne entered the game with the Chiefs leading 19-10. Mahomes was eventually ruled out of the contest, and go figure, the reigning world champs held on for a 22-17 win and non-cover.

Mahomes’ health was the single biggest story in the NFL this week. Fortunately for Kansas City, news came down Friday that the Chiefs superstar will be on the field on Sunday, as he told reporters he's been cleared from the NFL's concussion protocol.

Still, I was asked multiple times over the past few days how much he’s worth to the point spread, so I asked legendary Las Vegas oddsmaker Kenny White to help us crunch the numbers.

"I’ve got a nine-point drop-off from Mahomes to Henne," White told FOX Sports. "Before Week 17, Henne hadn’t started an NFL game since 2014, and he was just OK earlier this month against the [Los Angeles] Chargers.

"Mahomes does things on the field that no other quarterback can do. And he also covers up a lot of things for a very overrated Chiefs defense. The defense can be much more aggressive when Mahomes is part of the mix. He changes everything."

White makes his own player power ratings and updates them after every game. His system is more complex than most, as he makes a number on every player in the league. An average quarterback such as Henne is a "0" in White’s system, and Mahomes is a "9." In this case, it's about the combination of Mahomes being incredible and Henne being interchangeable.

"Whoever has the ball in their hands the longest is the most essential," White explained. "The quarterback has the ball more than 60 percent of the time. That’s the most important guy on the field. My dad came up with his player power ratings back in the ‘70s, and right away, he figured out that ratings for quarterbacks are three-and-a-half times higher than they are for regular players.

"It’s all I’ve known for 40 years. The quarterback has the most value."

FOX Bet is currently dealing Kansas City -3.5 with a total that opened at 53 but has been bet up to 54.5. That line clearly implied that Mahomes would play, and FOX Bet confirmed that the line likely wouldn't move much with the news, as the assumption all along was that he would be cleared.

But if he hadn't recovered?

"If Mahomes doesn’t play, my true numbers say it should be Buffalo -4," White had estimated. "The betting line [would] probably be closer to Buffalo -1.5 or -2, though. My numbers are a lot larger than most people’s, and that’s just my handicapping.

"My number is usually worth half to the betting line. It never really moves the whole way. Most of the time, it moves about half."

Sportsbooks would also get blasted by bettors salivating at the chance to take the Chiefs +4, especially at home. The line maneuvering process that White touched on is how bookmakers are able to stay ahead of the curve. They make the proper adjustments to avoid an avalanche of action on one side.

Mahomes isn’t the only quarterback in the playoffs who moves the meter. Green Bay Packers gunslinger Aaron Rodgers is also worth nine points to the betting line, but that wasn’t the case early in the season. Rodgers completely balled out in his 37-year-old season, and White was taking notes.

"I raised Rodgers up three-and-a-half points from the beginning of the year until now," he said. "Game in and game out, he kept overperforming the rating I had, so I had to keep raising the number until I got to a point where he wasn’t overcoming the rating.

"Each and every game, I give a quarterback a plus-minus and track if they played above or below expectations. Rodgers had the most games where he played four points above the average quarterback, and he did it 10 times."

White’s numbers say that Mahomes and Rodgers are each worth nine points, Buffalo Bills quarterback Josh Allen is worth 7.5, and Tampa Bay Buccaneers quarterback Tom Brady is worth 5.5. 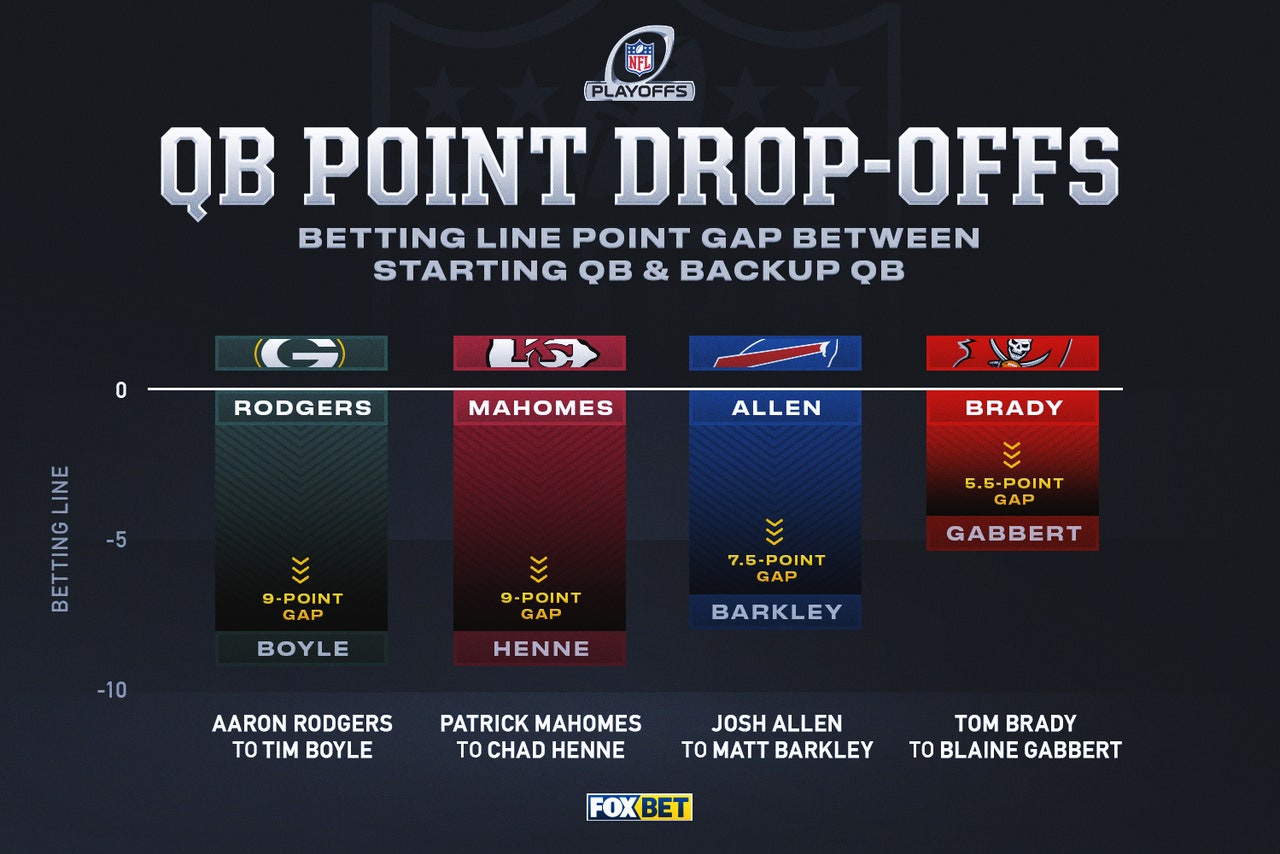 Things go next-level for oddsmakers when they have to balance perception and reality around an aging quarterback. Detaching past performance is exceptionally tough when it comes to a player such as Brady. He doesn’t have the same zip on his fastball, but he’s also a six-time Super Bowl champion, and bettors still line up to bet on him in the playoffs.

"That’s the tough part because you’re making an educated guess," White said. "When you’re doing player power ratings, you have to figure out the why.

"For certain quarterbacks, it might be a drop-off because of age. For others, it could be an injury either to the player or to the offensive line. I try to be fair and look back at the last three years for a bigger sample size. And then during the season, I don’t want to be knee-jerk about anything, so I’ll raise a guy up a half a point here and a half a point there."

All this talk about quarterbacks and their value to the point spread made me wonder about the most impactful non-quarterbacks in the eyes of oddsmakers.

"The biggest difference I ever had for a position player was three points," White recalled. "That was Deion Sanders. He was such an amazing cornerback but also a great return man, too. In this day and age, I’ve got Aaron Donald worth two-and-a-half points. He’s the most valuable position player right now."

Donald won’t be on the field this weekend, of course. But Mahomes will be. And no player on Sunday will have a bigger impact on the game or the spread than the Chiefs QB.