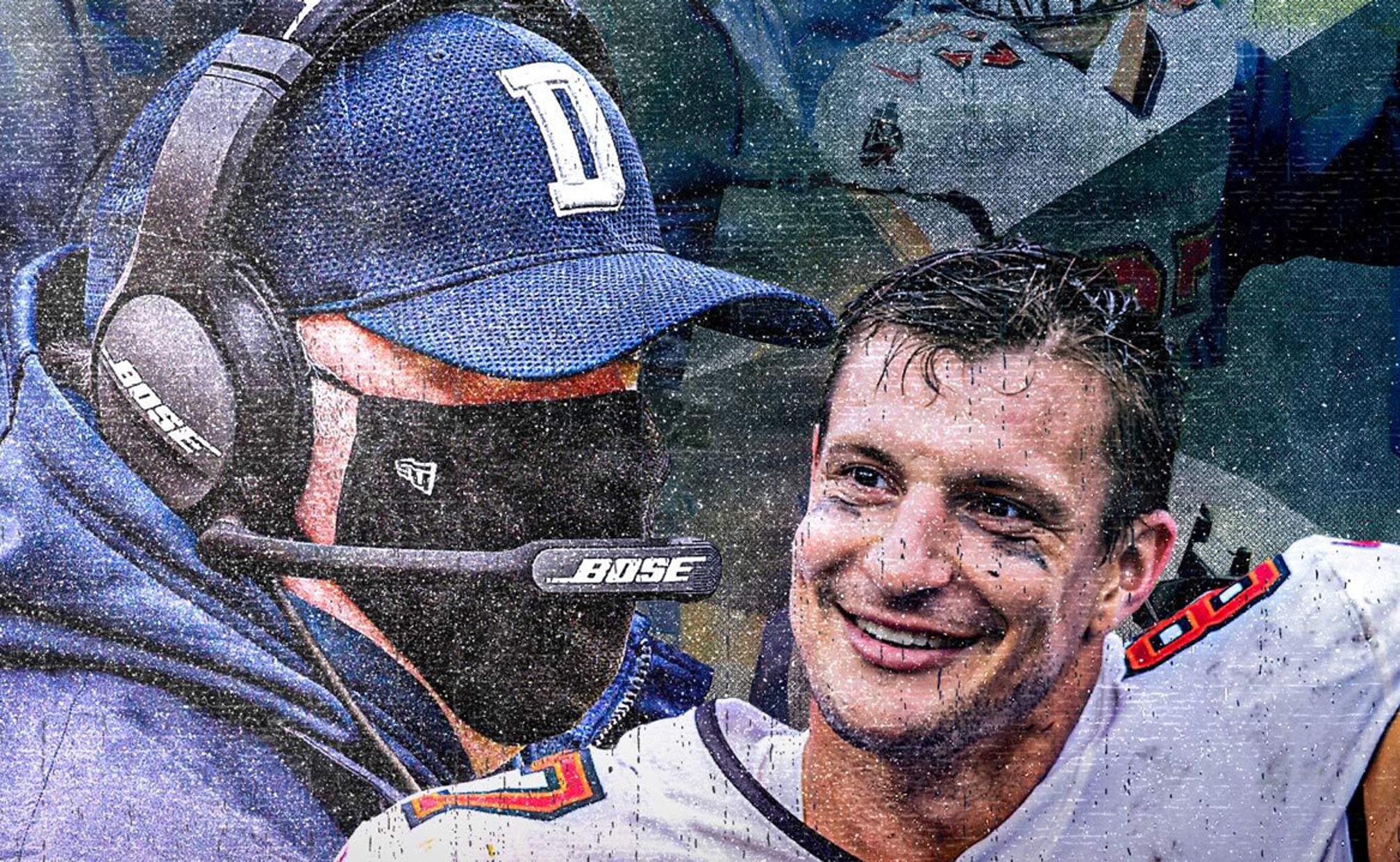 The NFL was cooking with gas this weekend. What a Sunday of action, including a riveting 10-minute stretch of drama at the end of the 1 p.m. ET slate of games when money flip-flopped within minutes and the sports books took a beating.

We also continued to see contenders separating themselves from the pretenders, which will create more betting opportunities as we move into November (with all odds via FOX Bet).

The most complete team in the NFL is the Tampa Bay Buccaneers. Now, Chiefs fans, this doesn’t mean y’all are bums. In fact, when the Chiefs play their best game, no one is beating them. And to you Steelers fans, I’ve been on your bandwagon since August, but now is not the time to count your chickens before they hatch. Just keep playing well.

Right now, Tampa Bay is firing on all cylinders. Either because of the one-point loss to the Bears on national TV or because of animosity toward Tom Brady, people are sleeping on what the Bucs are doing. In Week 6, they soundly beat the Packers 38-10, and they followed that up with an impressive 45-20 victory against the Raiders. Brady and the offense started slow and had a third-quarter loll, but finished strong.

After the win in Vegas, the Bucs sit atop Ben Baldwin’s tier rankings, which is a great way to evaluate the overall quality of a team.

The Bucs are fabulous on defense and continued their oustasnding season in Las Vegas. I wrote Thursday that I expected the Bucs to not allow the Raiders to throw deep, and outside of a few passes, they did just that.

After the game, the Bucs have moved far ahead in defensive EPA (expected points added). They are second in pass defense before the Rams play on Monday night and first against the run. They rank first in yards per play allowed, in the top 10 on third-down stops and close to the top in pass-rush win rate. They are as much of a lockdown defense as you get in the NFL in 2020.

But defense alone doesn’t make the Bucs the best team in the NFL right now. I’ll keep repeating it because I like being right, but everyone knew Tampa Bay’s offense would take time to gel. Brady was entering a new offense, one that’s vastly different than his Patriots system, with no offseason program, a short camp and an entire new roster of weapons. After Week 7, we are seeing the offense come alive, and that’s without Brady yet finding a reliable connection with the fabulously talented Mike Evans.

Tampa Bay entered this weekend seventh in DVOA, with a balanced attack coming in ninth in passing and sixth in rushing. The Bucs were 13th in EPA, but moved to ninth after their performance in Vegas. Their offensive line has their players -- Ali Marpet, Ryan Jensen and rookie Tristain Wirfs -- playing at a high level. They have weapons every team not named the Chiefs would be jealous of. And they will continue to improve with the addition of Antonio Brown in Week 9.

Tampa Bay started slowly with the use of play-action passes, and as they’ve picked up that usage, the connection between Brady and Gronk is starting to resemble their time together in New England.

The Dallas Cowboys were a favorite of some (maybe including me!) to win the NFC. They had the talent on paper and a new leader in former Packers head coach Mike McCarthy, a one-time Super Bowl winner. McCarthy was hired to make the offense more explosive and bring a fresh analytical coaching style to the Cowboys. Through seven weeks, none of that is happening, and Jerry Jones must be thinking about removing him after the season.

To be fair to McCarthy, the Cowboys are incredibly injured, and no one would expect them to win with an entire backup offensive line and a second-string quarterback. However, we all expect effort, hustle, proper execution of techniques and crisp play. Unfortunately for McCarthy and his staff, none of that is happening.

Instead, we have a team that routinely makes the same mistakes on defense, appears to play with no fire and players complaining to the media, leading to McCarthy to passive aggressively take shots back at them through the same medium. How did we get here?

It begins with the defense, on track to be the worst in the Super Bowl era. McCarthy hired Mike Nolan, doing him a solid for starting McCarthy’s coaching career as a coordinator in San Francisco. Nolan hasn’t been a good defensive coordinator in years, and it has shown this season. The Cowboys personnel doesn’t fit the scheme Nolan wants to run.

For years, the Cowboys defense majored in Cover 2. It was a “simple” defense, but they flew around the field, played fast and pressured the QB. Now they are being asked to do too much and play different techniques that they don’t excel at.

The best coordinators in the NFL are able to mold their scheme around their talent, and Nolan isn’t doing that. Then, when the players complain to the media about the defense being too complex, Nolan throws them under the bus, saying many high school team can run this defense.

It's tempting to blame the players at times, and there have been effort issues on defense that can’t be denied. However, in speaking with people about the Dallas defense, they acknowledge the same errors are being made over and over again, which leads them to believe coaching is the issue. It’s up to McCarthy at some point to make a change, and if he continues to stick with Nolan, he’s going to lose the team.

It’s hard to judge the Dallas offense without Dak Prescott or a healthy offensive line, but it worries me that players have gone to the media so quickly to complain about not being prepared. That is something the coaches can control and once again, the coaches need to tailor their style to the players. The team just appears to be dead on offense.

Zeke Elliott hasn't been his Pro Bowl self. What about the rest of their offensive weapons? Andy Dalton isn’t a scrub. There’s ample opportunity to generate yards in a capable offense, yet they are lifeless. And there’s no help on the horizon for the Cowboys. As they continue to lose, the moral will drop. The only think that will fix this is another coaching change, something I’d bet will happen after the season.

A Day of Drama

It wouldn’t be an NFL Sunday without sweating out your wagers, and the final 30 minutes of the early NFL window provided all the action. To date, it was the best 30 minutes of football this season. The wagers for multiple games came down to the wire, with the public getting their victories, besting the books.

The Steelers opened up as a 2-point favorite against the Titans, but the line moved four points quickly, with the Titans turning into 2-point favorites. It closed around Titans -1. For the first 40 minutes of the game, the Steelers dominated the Titans. They were up 27-7 before Tennessee hit AJ Brown for a 73 yard touchdown early in the third quarter.

From there, it was a struggle for the Steelers to score points. The Titans eventually closed the gap to three, down 27-24 with 10 minutes left in the game. The Steelers proceeded to drive down the field, chewing up seven minutes off the clock before Ben forced a terrible interception, taking the chance of a field goal or game-clinching touchdown off the board.

The Titans took over at the 20 with 2:34 left in the game. As someone holding a Steelers ticket, I had that uneasy feeling of knowing exactly how this ends – with a Titans win and cover, something they didn’t deserve. The Titans moved the ball down the field and prepared for a game-tying field goal. Titans kicker Gostkowski let it fly ... missing just right! The Steelers win and cover! Hell yes.

The Bengals and Browns went back and forth on Sunday, with Cincinnati coming out strong. The Browns tied the Bengals at 17 to start the second half, then the teams traded scores until Cincy scored with 66 seconds left in the game.

The Browns, a 3.5-point favorite, were down 3 with no timeouts left. Baker Mayfield, who started the game looking like Faker Mayfield, was on a roll. He calmly drove down the field and threw a touchdown pass with under 20 seconds left. Remarkable drive from the Browns. They were now up 3 with an extra point to cover. I was standing in my TV room cheering and texting my gambling friends.

So I take the blame when Cody Parkey missed the extra point ... FML. The Browns win by 3. Just an absolutely brutal beat.

The Falcons were slight favorites at home against the Lions. Detroit was leading 16-14 as the Falcons were driving for a game winning field goal. The Lions were out of timeouts with the Falcons at the 10-yard line. Atlanta should have just taken a knee, kicked a field goal and taken the win. It would be a push for most, depending on your number.

Instead, they handed off to Todd Gurley, who broke a tackle and then tried to fall down before the goal line. But he didn't, and the ball cross the plyon. Touchdown Falcons. They converted on the two-point attempt, now up 6 with a minute left. They went from either pushing, or allowing the Lions to cover with a field goal, to now outright covering.

So of course what happens? The Lions drive down the field and score with no time remaining on the clock. They hammer home the extra point attempt and win. Poor Falcons ticket holders. The money line and the side just ruined by poor clock management.

Burrow's Road To Return
What did Joe Burrow's surgery entail? What will rehab look like? Dr. Matt Provencher answers those injury questions and more.
16 mins ago