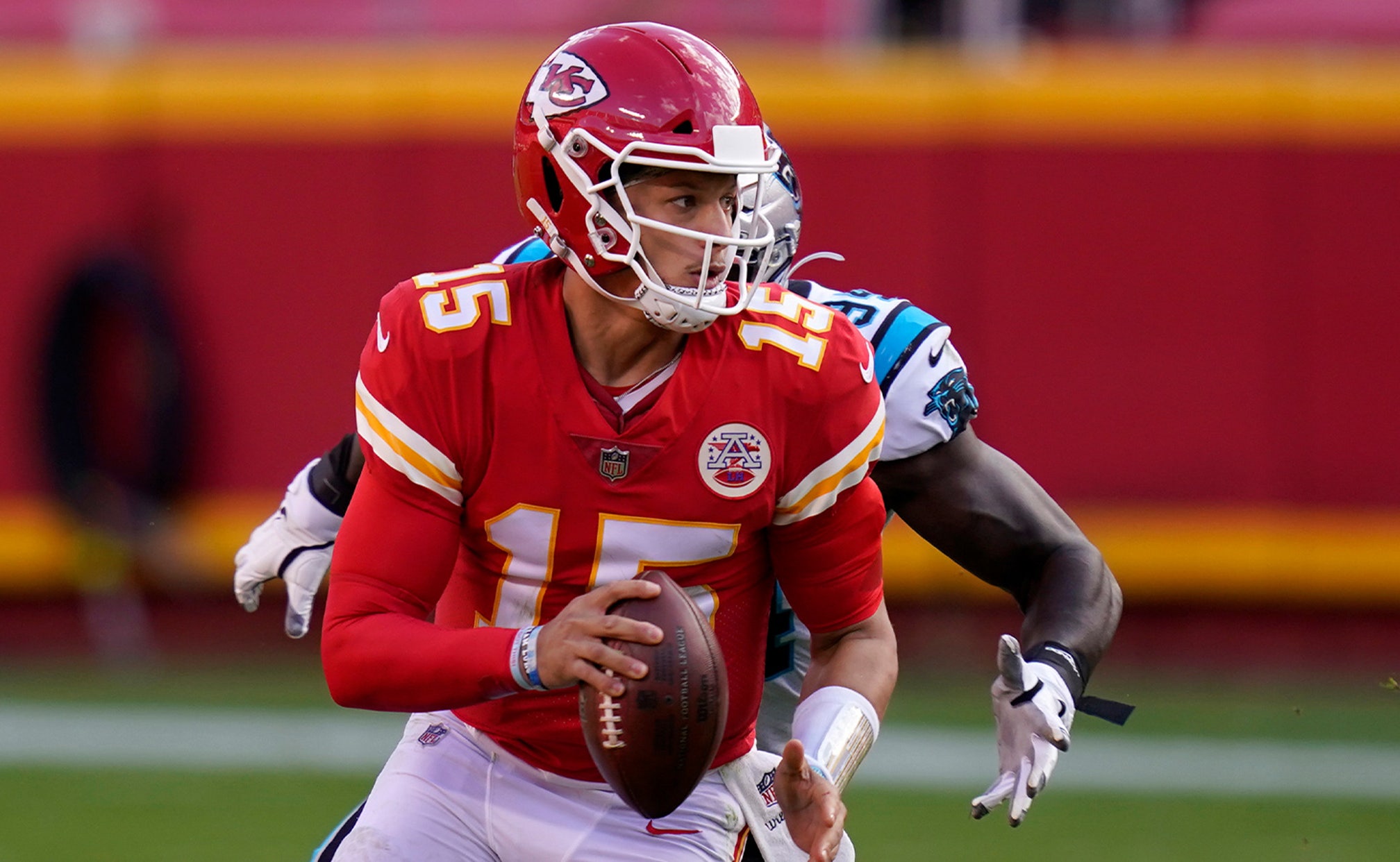 Even though the Kansas City Chiefs were on a bye in Week 10, Patrick Mahomes was busy kicking Russell Wilson out of the kitchen and off the top of the rankings for best NFL MVP odds.

Don't worry, Seahawks fans, Russ is still in a good spot to win his first MVP award ⁠— and there is still a LOT of football left to play. Furthermore, there are a lot of worthy candidates outside of Mahomes and Wilson, too. 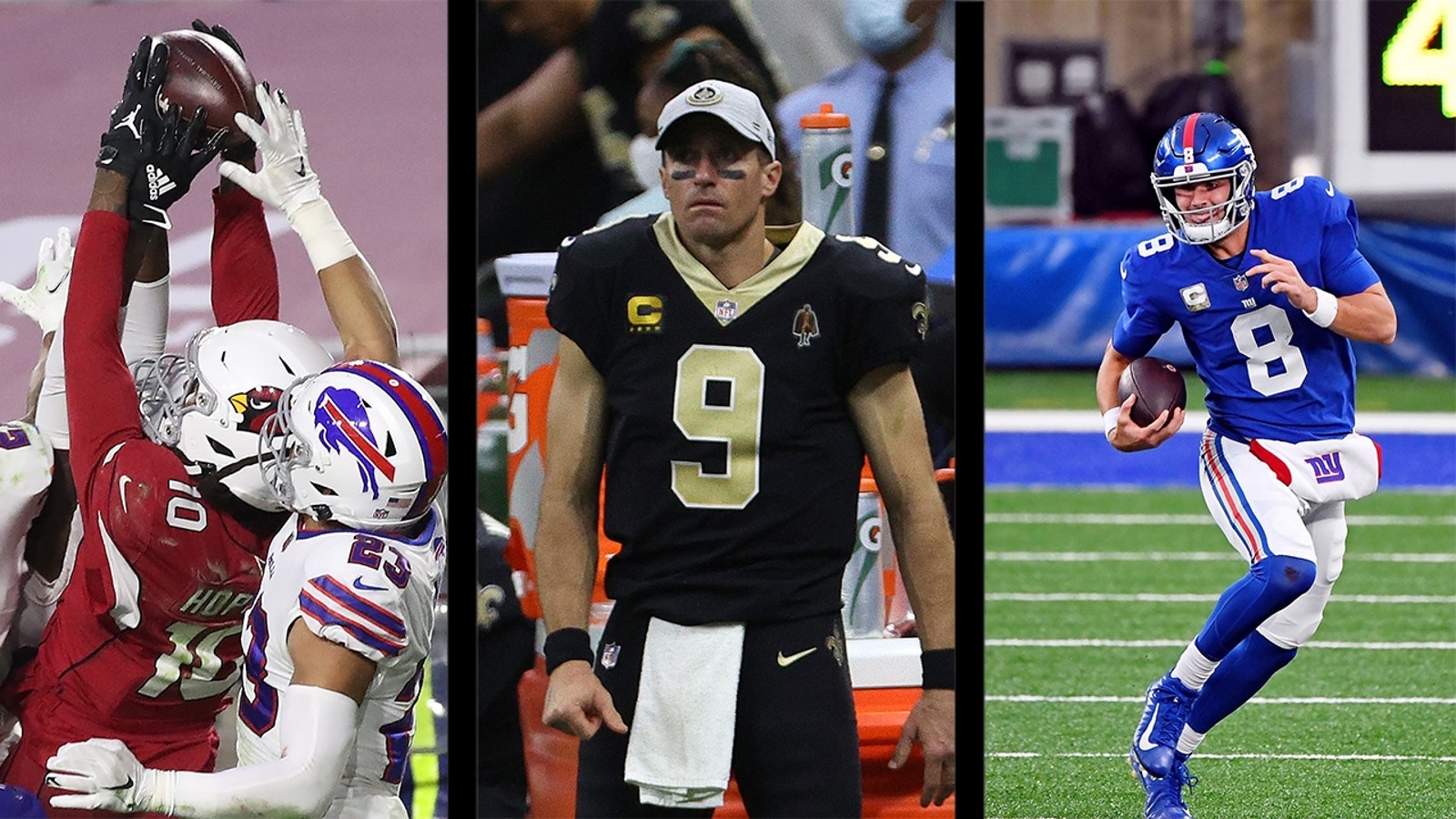 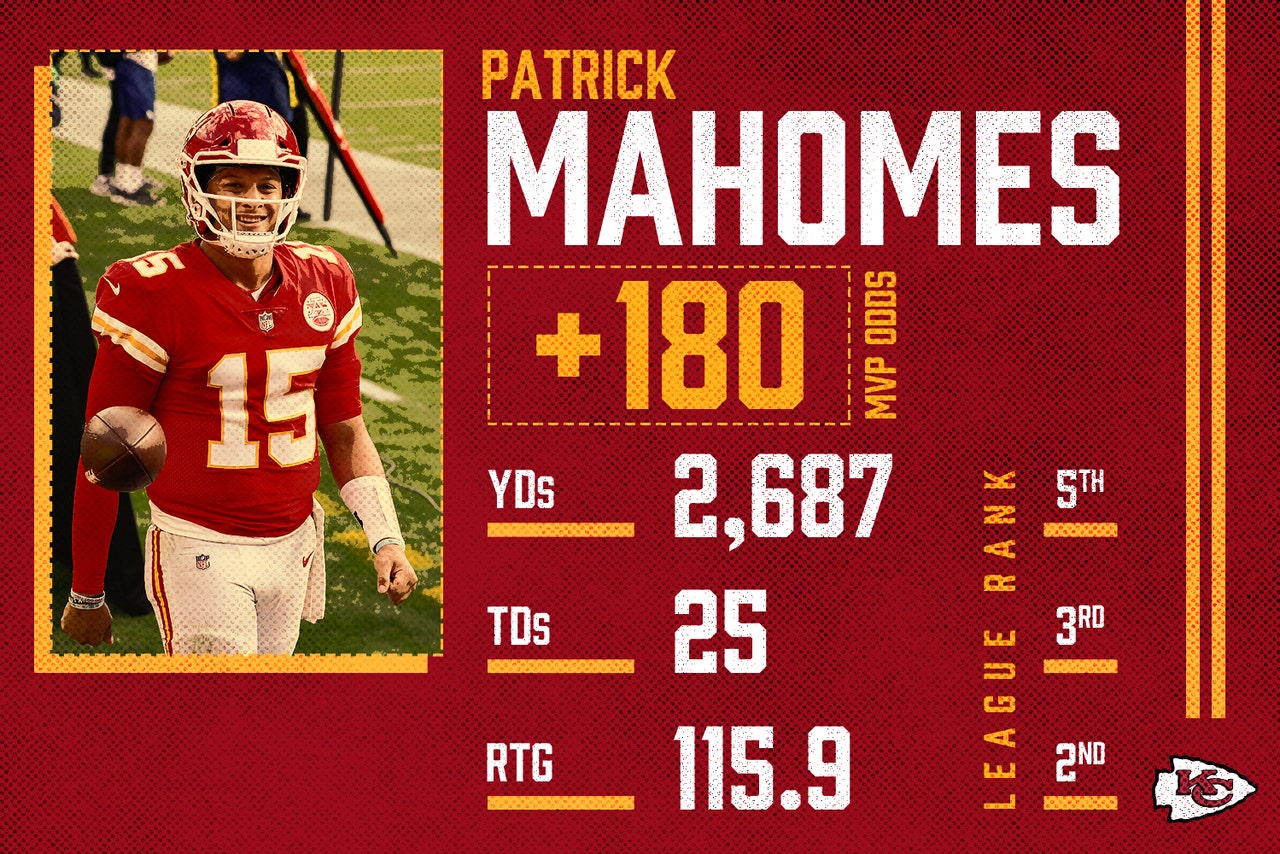 How it's going: Mahomes finally supplanted Russell Wilson for the first time since the MVP Watch series launched on Oct. 14. It's well-deserved recognition, too. The 2018 MVP has been on an absolute tear with a combined nine touchdowns and 788 passing yards in his two games prior to a Week 10 bye. He has just one ⁠— that's right, one! ⁠— interception so far this season.

What's up next: Fresh off a bye, the red-hot Chiefs will aim to extend their winning streak to five games in a tasty rematch against the Las Vegas Raiders. Jon Gruden's team is responsible for the lone interception, and loss, on Mahomes' record this season, a 40-32 encounter in Week 5. Mahomes and the Chiefs will look the return the hospitality as they visit Vegas' state of the art stadium Sunday night.

What people are saying: "Right now, it's a lot of drama for who's going to get the honor of finishing second to Patrick Mahomes in the MVP race." ⁠— Nick Wright 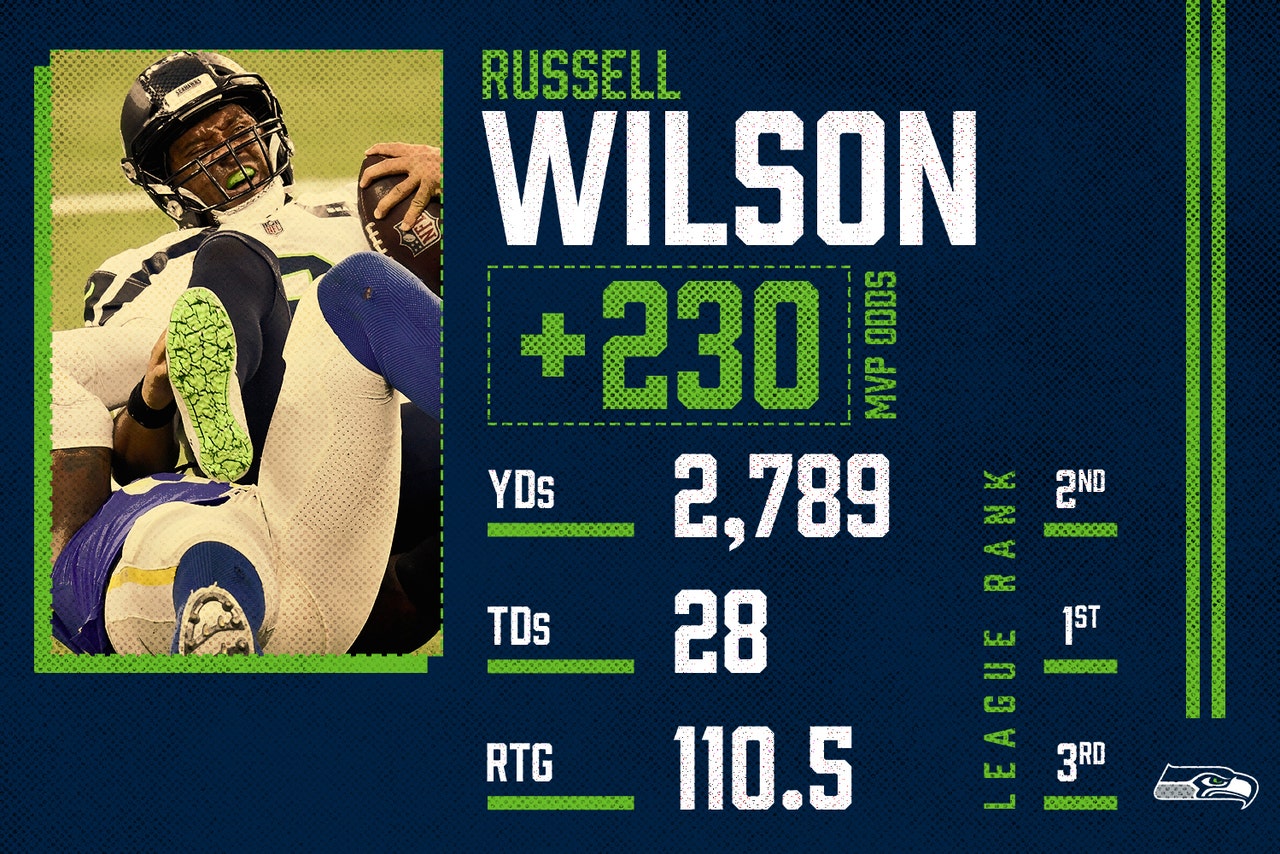 How it's going: With three losses in their past four games, things aren't going too great for Wilson & Co. in the Pacific Northwest. After having just three turnovers through the first five weeks of the season, Russ has lost the ball 10 times in the past four games. In last week's game against the Rams, Wilson failed to throw a TD pass for the first time all season and registered a paltry passer rating of 59.5.

What's up next: It's a short turnaround for the Seahawks, as Kyler Murray and the Arizona Cardinals come into town for Thursday Night Football. These two last squared off in Week 7, where Wilson had three TDs ⁠— along with three picks ⁠— in a gut-wrenching 37-34 loss in OT. That game featured it all, including DK Metcalf's epic chase-down tackle on a would-be pick-six. Thursday should be fun!

What people are saying: "I don't need Russ to cook all the time. C'mon, Russ. Too many turnovers." ⁠— Shannon Sharpe 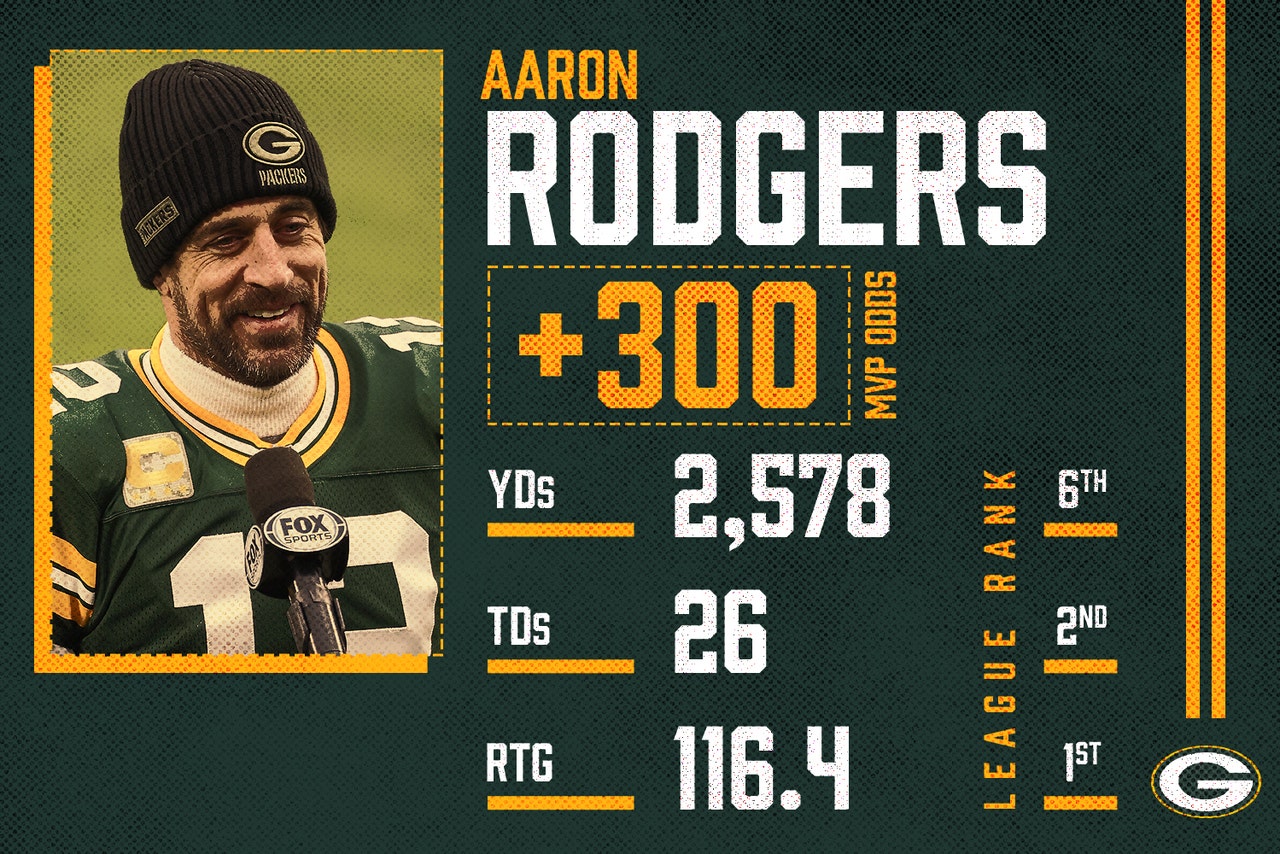 How it's going: Rodgers is putting together a sneaky-good season – at least, as far as standards go for a two-time MVP. The Packers QB followed up a Week 9 dismantling of the Niners with an efficient, 325-yard performance in a close shave against the Jaguars. He had two passing TDs, one rushing score and a pick in that Week 10 tilt.

What's up next: A cross-conference clash awaits the Packers in Week 11, as Green Bay visits the 6-3 Colts. Rodgers will have his hands full with a defense that allows just 19.7 points per game, good for fourth in the league. Indy also boasts the second-ranked pass defense (198 yards per game) and third-ranked rush defense (91 yards per game).

What people are saying: "Most years, MVPs win the crown over the final half of the season. So while Rodgers is right in the running at the halfway point, he’ll need a strong finish over the final eight games." ⁠— Zach Kruse, The Packers Wire 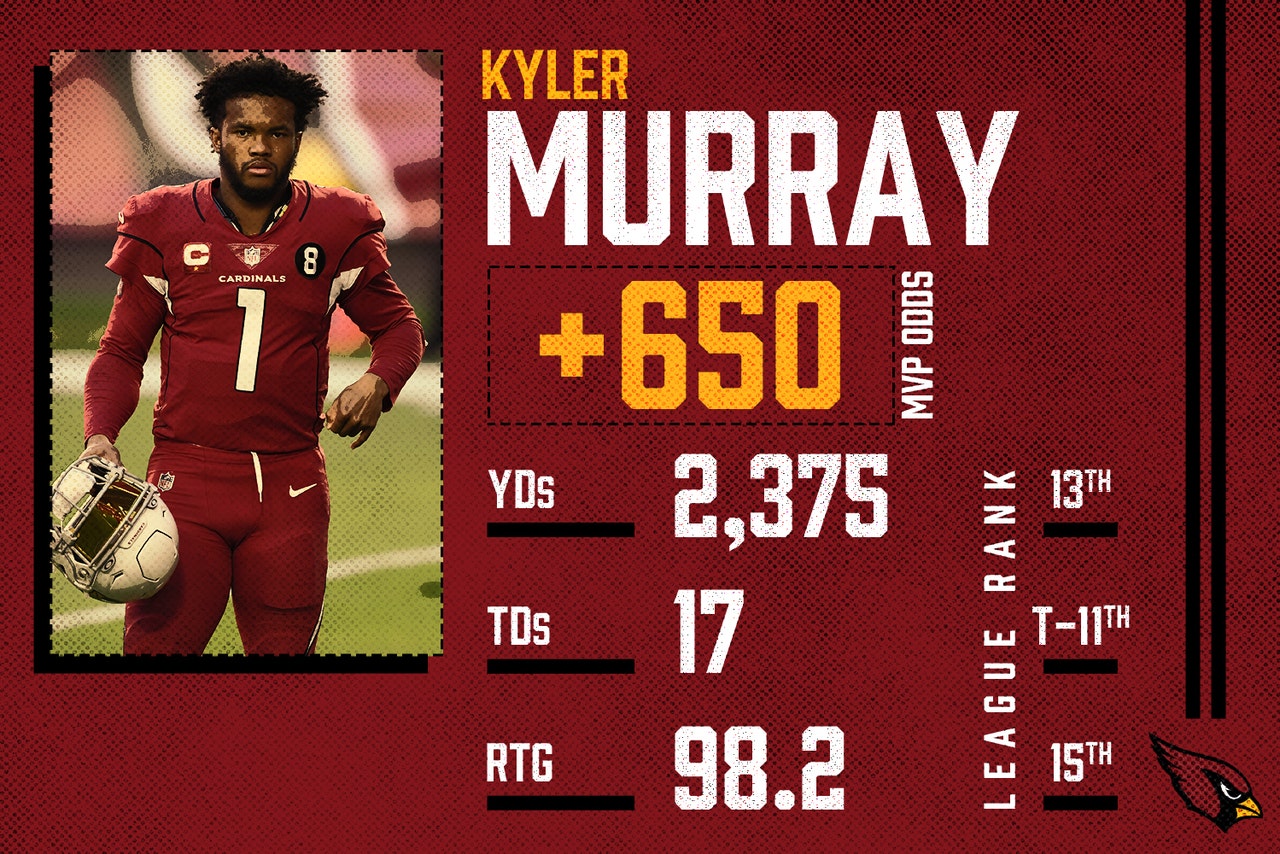 How it's going: Two words: Hail Murray. Arizona's quarterback put on another show-stopping performance against Buffalo last week for a 32-30 win that was must-see quality. Murray's deep throw, combined with an equally amazing DeAndre Hopkins catch, gave the Cardinals a signature win and vaulted Murray's MVP value. For reference, FOX Bet had Murray priced at +2800 last week. Good luck finding anything close to that number now.

What's up next: How about a battle between two oft-compared, MVP-seeking division rivals? Murray and Wilson will run it back as the Cardinals visit the Seahawks on Thursday Night Football. Murray got the better of Wilson last time out with four total TDs and one interception in a 37-34 victory in overtime.

What people are saying: “He throws this ball falling sideways out of bounds, across his body. And manages to get enough velocity on it to get it 55 yards in the air. But more important, he manages to drop it right into the apogee of DeAndre Hopkins' leap ... It was a perfect throw to a perfect spot.” ⁠— Skip Bayless 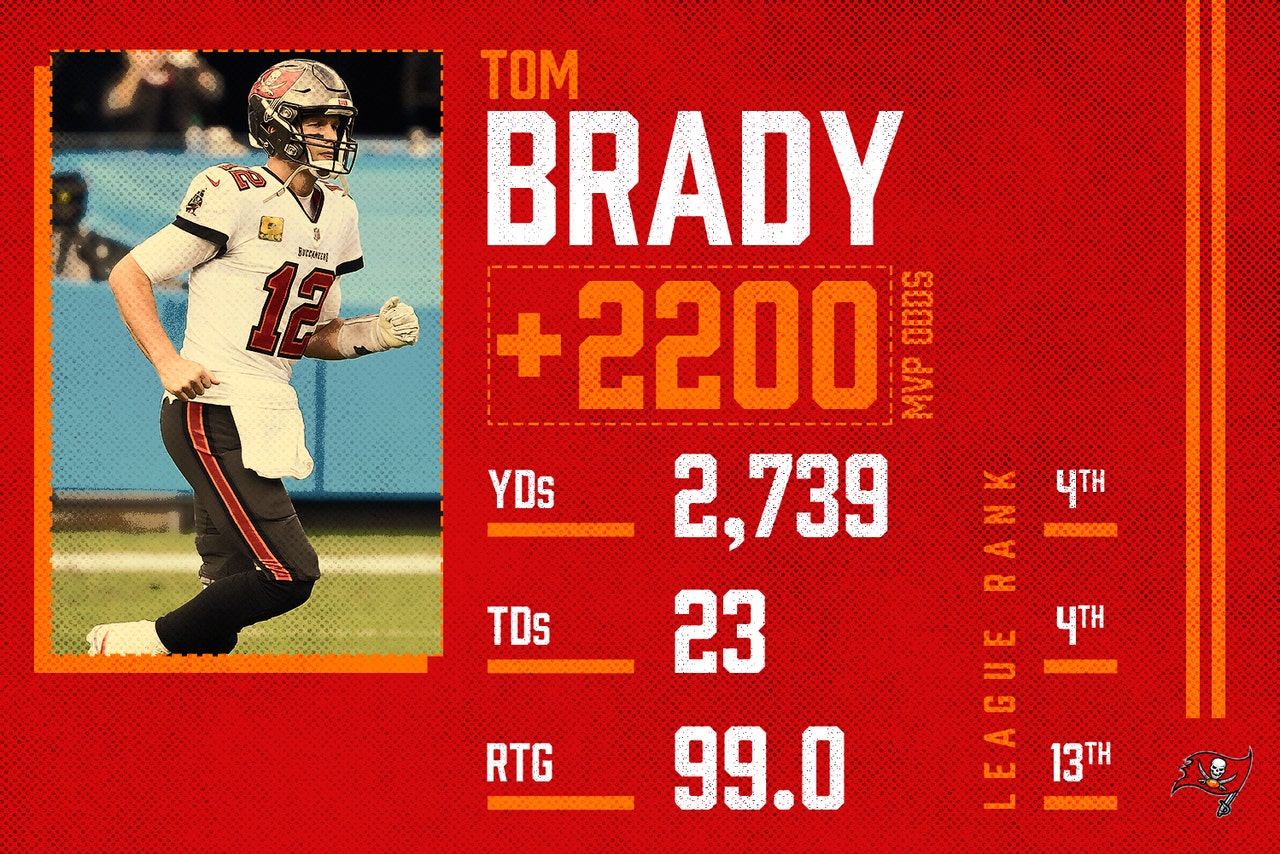 How it's going: Boy, did Brady and the Buccaneers need that. After floundering in a 38-3 Week 9 loss against the Saints, Brady's Bucs rolled into Carolina and dropped 46 on the Panthers. Brady completed 71.8 percent of his passes for 341 yards and three touchdowns in the air, and added a vintage Brady sneak for a rushing TD, to boot. It's been an up-and-down first year for Brady in Tampa, but there have certainly been more ups.

What's up next: Sean McVay and the Rams head across the country for a visit on Monday Night Football this week. Brady is 3-1 lifetime in the regular season vs. the Rams, but LA's defense is one of the stingiest units out there. The 18.7 points per game the Rams allow is second in the league, and they're third in passing yards allowed (199) and fifth in rushing yards allowed (96) per game.

What people are saying: "Tom Brady, under the circumstances, was extremely impressive yesterday. He went from arguably the worst game of his career to the best game he has played so far this football season." ⁠— Skip Bayless 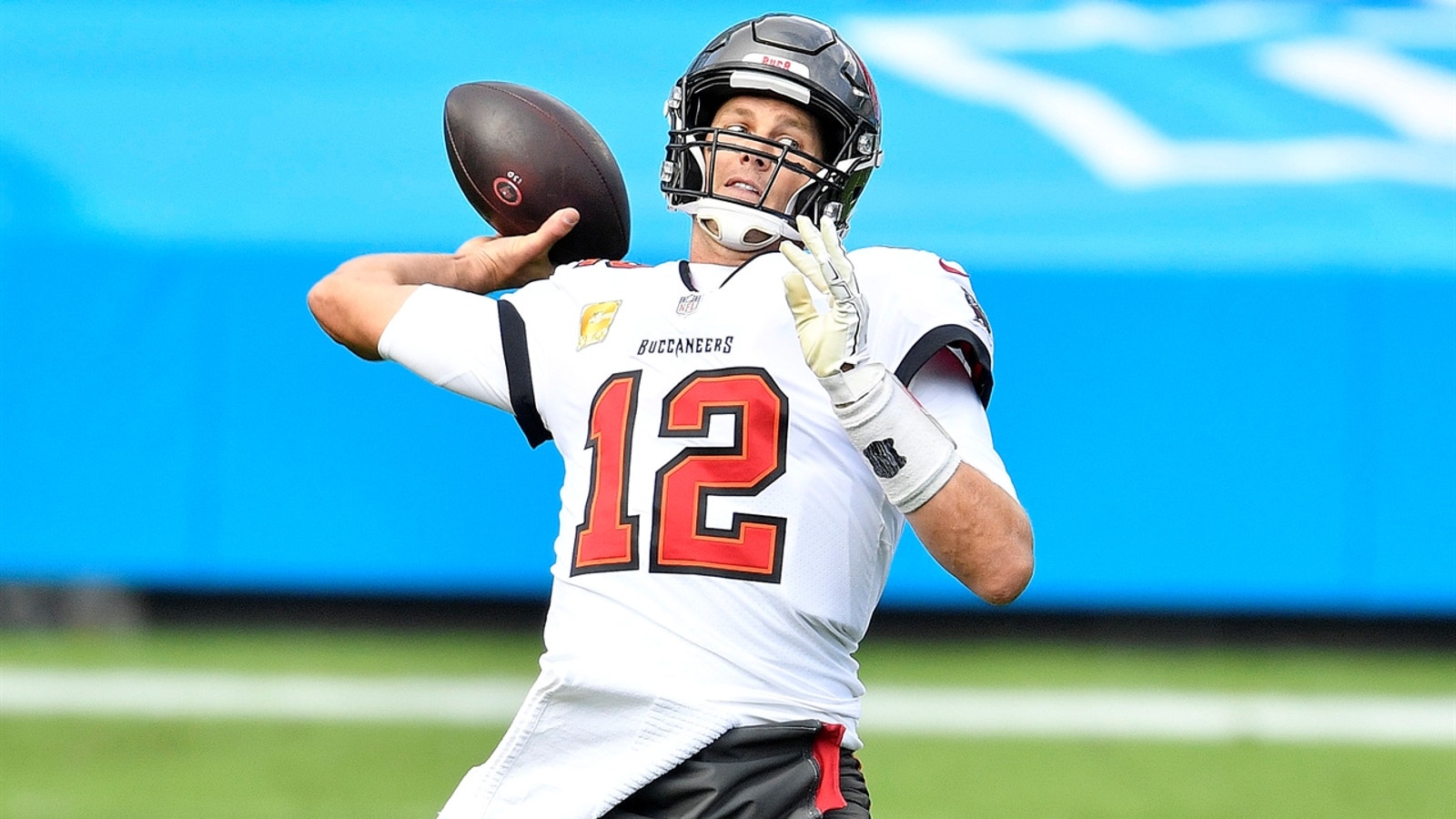 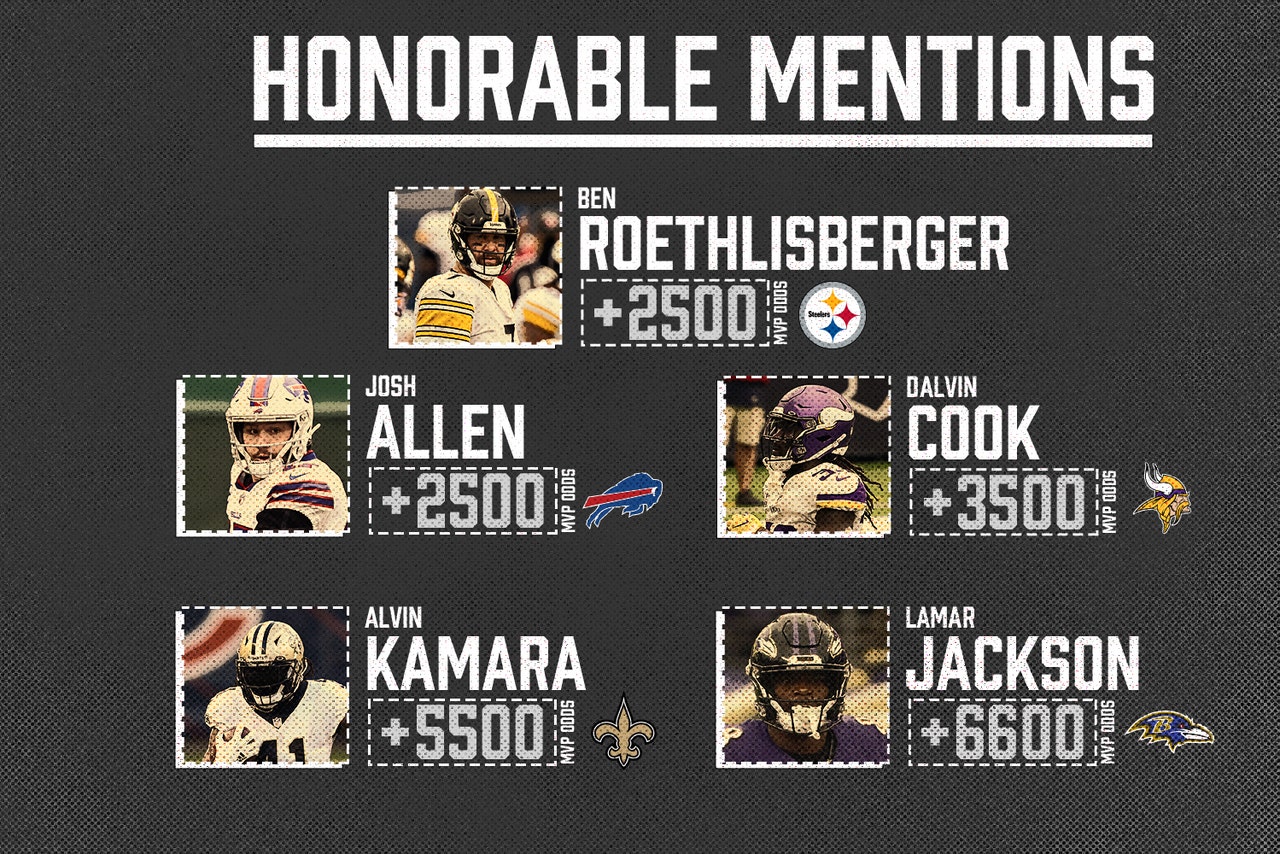