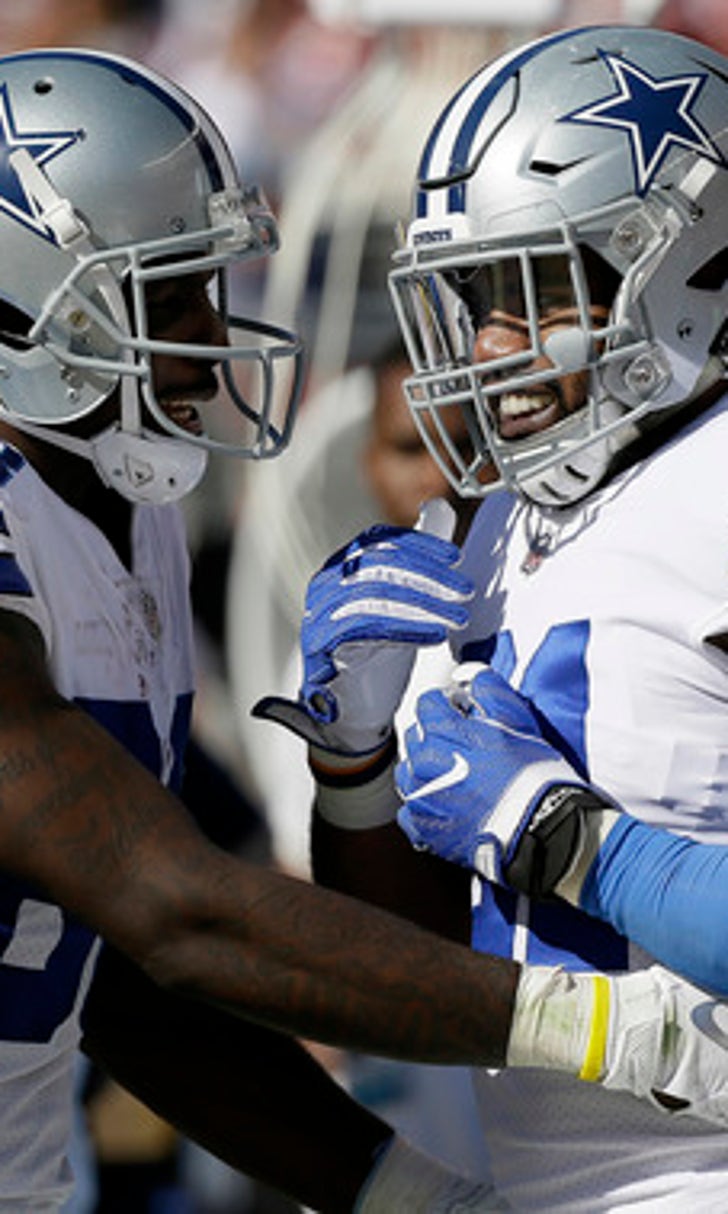 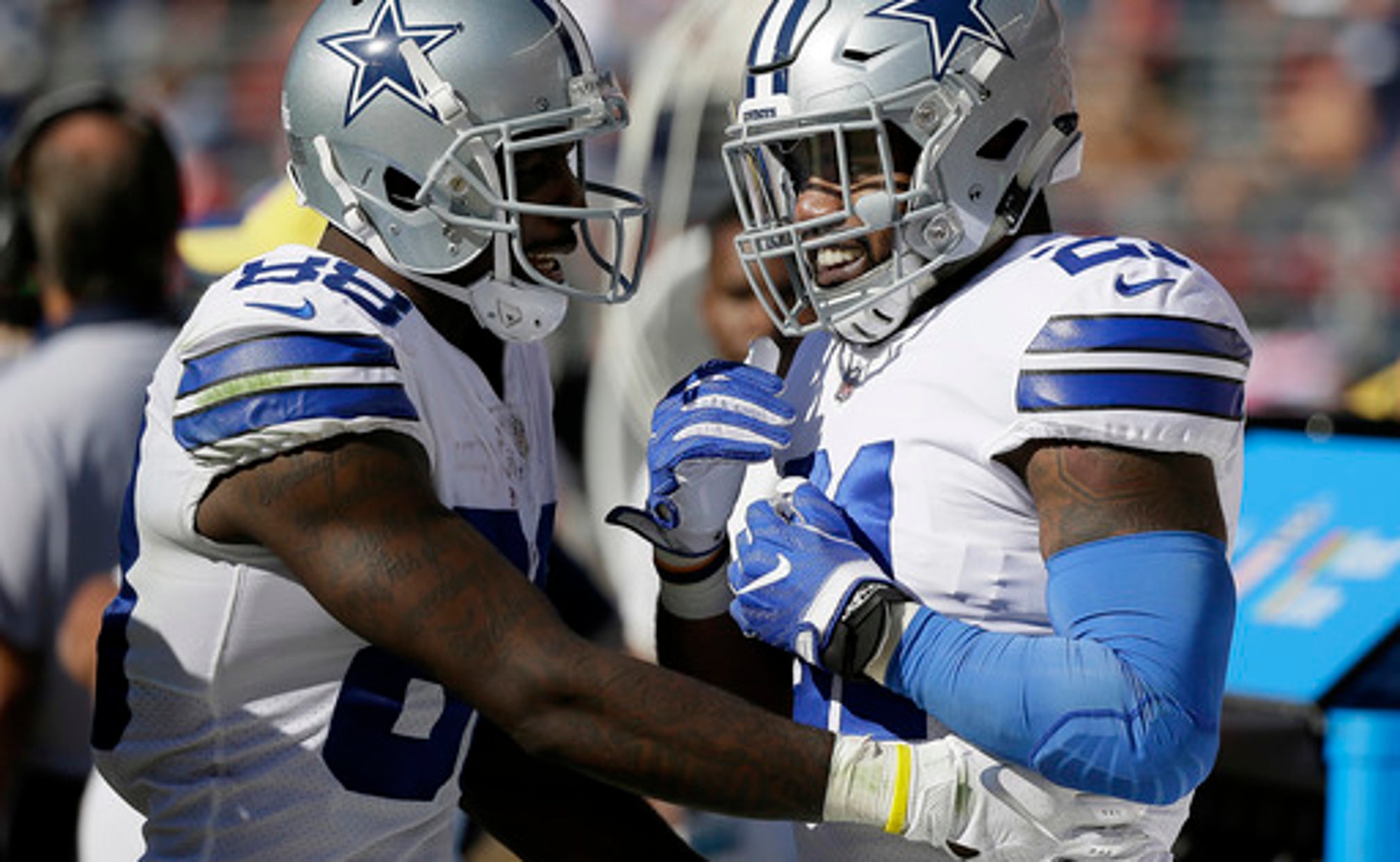 SANTA CLARA, Calif. (AP) Ezekiel Elliott made the most of his legal reprieve, taking advantage of a legal ruling that put his suspension on hold and responding with the most productive game of his career.

Elliott gained 219 yards from scrimmage and tied a career high with three touchdowns just days after winning in court and the Dallas Cowboys beat the winless San Francisco 49ers 40-10 on Sunday.

''I put that aside when I get with these guys,'' Elliott said. ''These guys do a good job of giving me something else to think about, keeping me up no matter what's going on out there. I'm just happy to be out here and be able to play with them and go and get another win.''

Elliott was granted his second temporary restraining order Tuesday, putting his six-game suspension over domestic violence allegations on hold and then gave the Cowboys (3-3) a big boost on the field.

Elliott matched his season total of rushing touchdowns with two in the first quarter and then took a short pass from Dak Prescott 72 yards for another touchdown on Dallas' first possession of the second half to put the 49ers (0-7) away. Elliott ran for 147 yards on 26 carries to go with the big catch, setting a career high in scrimmage yards in a game.

That performance spoiled the starting debut of rookie quarterback C.J. Beathard , who was sacked five times, lost two fumbles and failed to lead the 49ers into the end zone until he scored on a run with the game out of hand in the fourth quarter.

Beathard finished 22 for 37 for 235 yards, but his fumble on a sack by DeMarcus Lawrence late in the first half ended a promising drive that went down to the 5.

''They brought a lot of pressure, which we hadn't seen them do much of,'' Beathard said. ''I guess when you're a rookie, they try to see what you know and put you on your heels a little bit.''

The 49ers, the first team ever to lose five straight games by three or fewer points , were never really close against the Cowboys.

MOMENTUM TURNER: The 49ers got off to a good start when they forced a three-and-out on the opening possession. But Trent Taylor fumbled the punt return , setting up Dallas at the 20. Elliott ran three straight times and scored his first TD of the game from 1-yard out.

INJURED KICKER: The Cowboys lost kicker Dan Bailey to a right groin injury in the first half, forcing coach Jason Garrett to scramble a bit. Dallas went for the 2-point conversion following their first TD after Bailey's injury and couldn't convert. Safety Jeff Heath then made two of three extra points in the second half and performed well on kickoff duties in his first game kicking since high school. Heath is the first non-kicker or punter to make multiple extra points in a game since former Houston linebacker and current Packers GM Ted Thompson made four in 1980.

''I saw Morten Andersen go into the Hall of Fame in Canton. I don't know if he has anything on Jeff Heath,'' Cowboys tight end Jason Witten said. ''The guy is a really special athlete. Those are big kicks. Guys were having a lot of fun with it, too.''

BIG CATCHES: While Elliott delivered most of the big plays for Dallas, Witten added an impressive catch of his own in the second quarter. He pulled in Prescott's 18-yard pass to the end zone with one hand to put the Cowboys up 20-3. Dez Bryant then delivered a big TD catch of his own in the fourth quarter, tying Bob Hayes' franchise record with the 71st in his career.

The team brought in about 30 of Clark's former teammates, all wearing No. 87 jerseys, to honor him for his famous ''Catch'' that beat Dallas in the 1981 NFC title game and launched the 49ers dynasty.

Clark spoke haltingly to the crowd while describing the one wish he had for this day.

''I just want to see my teammates. And the 49ers heard that and flew all these players in so I could see them one more time,'' Clark said.

The 49ers lost RT Trent Brown to a concussion and LB Reuben Foster to a rib injury.

The Path of Least Consistence
For the NFC East, wins haven't been aplenty. However, intrigue has been in never-ending supply.
6 days ago

How To Win $50,000 On Thanksgiving
As old rivals collide with first place in the NFC East on the line Thanksgiving Day, fans can win big – for free.
November 26
those were the latest stories
Want to see more?
View All Stories
Fox Sports™ and © 2020 Fox Media LLC and Fox Sports Interactive Media, LLC. All rights reserved. Use of this website (including any and all parts and components) constitutes your acceptance of these Terms of Use and Updated Privacy Policy. Advertising Choices. Do Not Sell my Personal Info