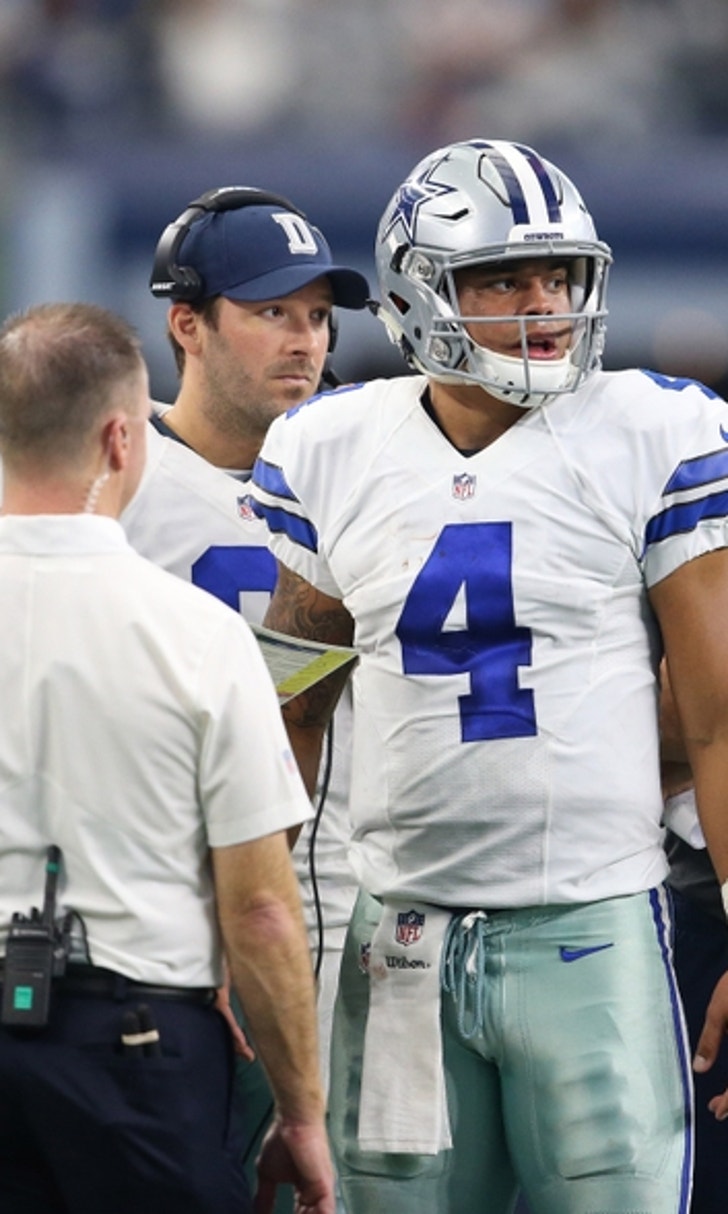 BY Fansided and Brad Austin/FanSided via The Landry Hat • December 29, 2016
share

The Dallas Cowboys face a meaningless game, though one veteran QB will take this opportunity serious as management evaluates his future.

Aside from injuries, the outcome of the Dallas Cowboys‘ final regular season game in Philadelphia will have no impact on playoff performance.

Some say a win would sustain momentum, while a loss could shake their mojo.

A loss while playing it safe (resting starters) against the 6-9 Eagles won’t dampen team confidence one ounce.

Setting the single-season franchise wins record (14) would be nice, yet it certainly won’t help defeat their first playoff opponent.

When the playoffs start, records hit reset. Win or go home applies equally to all.

Regular season accomplishments fall by the way side, and past failures are forgiven.

While the Cowboys finale won’t affect the playoffs, it does hold future implications.

One veteran QB will take this battle seriously as management evaluates his play.

Discussing the Cowboys’ future at back-up QB must begin with Tony Romo.

Just to clarify, Dallas will not risk his playoff health against the Eagles.

Despite mixed emotions, it’s a near certainty Romo will play elsewhere in 2017.

Regardless of trade, release, or retiring, $19.6 million in already paid bonus money will flood the Cowboys’ 2017 salary cap.

However, Romo’s $14 mil base (and future base salaries) will leave the books.

The salary cap cost of keeping him another season was set to total $24.7 mil.

Tony will always be appreciated in Dallas, but cap maximization is crucial to winning.

While he’ll leave with all our best wishes, business is business and life moves on.

The $5.1 million saved from Romo’s exit will be enough to secure a quality back-up and apply the remainder to other positions.

For example, Mark Sanchez signed for $2 million this season. With a raise to $2.5 mil next year, Dallas would still have $2.6 mil in reserve.

There is a problem. Without Romo, Prescott will be the only QB under contract.

Romo won’t play Sunday, which sets up Sanchez to receive at least a half.

In an ironic twist, Sanchez’s audition will come against the last team he played for.

In March the Eagles slapped him in the face in a trade to Denver for a 7th round pick.

The Broncos rubbed salt in the wound by cutting him before the season began.

On Sunday Sanchez has the rare opportunity to impress his current boss by beating the team who tossed him away for draft peanuts.

IN BACK-UP LAND, SANCHEZ IS WORTHY

Before the moaning and groaning begins, let’s have a little back-up perspective.

The grading measure of a quality back-up is someone who can at least tread water (50-50 split) in reasonably short stints of relief.

The back-up would earn his paycheck simply by handing the team back at 6-4.

Playoff bound and quarterback deprived, the Texans (Tom Savage) and Raiders (Matt McGloin) only wish he was on their roster.

On Sunday Sanchez will have a chance to prove his worth and get a jump on the Cowboys’ soon to be vacant, primary back-up spot.

A Fresh Start In The SEC
Two of college football's powerhouses named new starters on Monday, and Matt Leinart sees big things for both.
14 hours ago

Deion Sanders Joins The Coaching Ranks
Call him "Coach Prime." The Hall of Famer is back, and he made quite an entrance. Here's how the sports world reacted.
16 hours ago