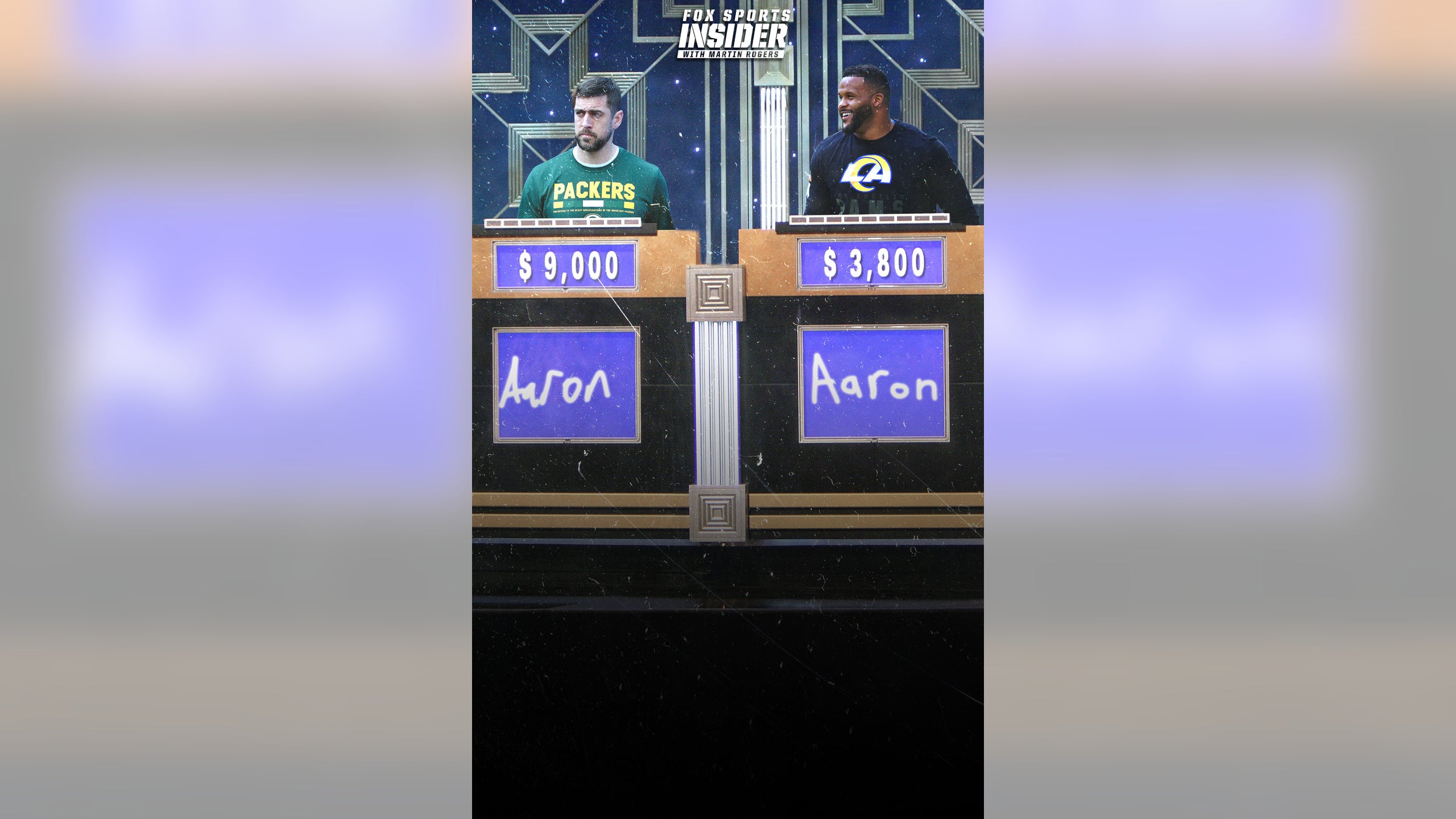 previous story
How To Win $250,000 On Rams-Packers
next story
North Carolina Fans Get Their Prize
National Football League

In one of the quirkiest yet most enjoyable storylines from the week leading up to the National Football League’s blockbuster slate of divisional-round games, Aaron Rodgers spoke of his delight at the fact that he will soon become a stand-in host on Jeopardy.

That’s right: Rodgers -- soon to be known as "Who Is Aaron Rodgers?" -- will temporarily fill the illustrious shoes of the dearly departed Alex Trebek and quiz an assortment of contestants once the Green Bay Packers’ season is over.

Like Jeopardy’s timeless brainteasers, the solution to how soon that outcome will come to pass is best posed in the form of a question. Ask the right ones, and you’re on the road to riches.

As the Packers prepare to begin their postseason campaign against the Los Angeles Rams on Saturday (4:35 p.m. ET on FOX), all kinds of queries are being posed, and all of them have some kind of merit.

Unpredictable but not overly cold, settling at around 30 degrees. What is … the game day weather forecast?

Up-and-down this season and recently named the starter in this contest, despite having surgery on his right thumb after a Week 16 loss. What is … Los Angeles Rams quarterback Jared Goff?

Correct and correct, yet you don’t have to be Ken Jennings to know that the most pertinent factor on Saturday isn’t likely to be the wind chill or the former No. 1 pick who has thrown at least one interception in 10 of his 16 starts this season.

The biggest deal in this game is the one where the stars collide, and it figures to decide the whole thing. On one side, Rodgers and his power-punching Packers offense. On the other, the no-nonsense machine of the Rams defense, which will try to invade his space with malevolent intent.

"I really like the Rams' defense," former Packers Super Bowl-winning wide receiver Greg Jennings said. "I like what they do [with] interior pressure with Aaron Donald and Leonard Floyd on the outside getting pressure on the edge, someone that can contain and keep Aaron Rodgers in the pocket.

"Aaron Rodgers and this offense -- I love him, but I like this defense a little bit better. When you have a bye, I feel like it disrupts your rhythm and what you’ve been doing so well. This Rams' defense is on a roll."

On the past four occasions Rodgers has squared off against a team ranked No.1 in total defense, he has lost. The Rams' defense ranks first in points allowed, total yards and passing yards.

Los Angeles’ defense was quick to give Rodgers credit during media sessions this week, yet the Rams are determined to disrupt his flow as much as possible. With prolific tackle David Bakhtiari out, protecting Rodgers effectively will be a point of concern for Green Bay.

"The biggest challenge is not being afraid," Rams defensive lineman Michael Brockers said. "His mystique and the magical ability he has when he makes off-schedule throws, it is really just about getting after it, making it a tough physical football game, just getting after him."

It seems probable that Donald will start despite suffering a rib injury in the Rams’ victory over the Seattle Seahawks last week, and Jalen Ramsey’s ability to shut down elite receivers is another major X-factor for L.A. Don’t expect Rodgers to throw much in Ramsey’s direction, and don’t be surprised if Davante Adams lines up in the slot with far more frequency than normal.

Yet despite the Rams’ defensive force, they are up against a monster on the other side of the ball. The Packers lit a fire under Rodgers by drafting his long-term replacement Jordan Love, and he responded by throwing 48 touchdowns against only five interceptions, en route to becoming an overwhelming favorite to win the MVP award.

"I've really tried to savor every moment this year and enjoy the heck out of everything," Rodgers told NFL.com. "I know that my time in the league is way closer to the end than the beginning, and I just want to really savor all the things that make our game what it is and the experience what it is."

Green Bay is a 6.5-point favorite, per FOX Bet, a sentiment shared by FS1’s Nick Wright on First Things First.

"The Packers are going to win," Wright said. "John Wolford or Jared Goff are not going to go to Lambeau Field and win against Aaron Rodgers."

Rodgers, Donald, the weather, the Packers’ bye, the history, the QB saga in L.A. – it all adds up to an opinion-splitting matchup and a tremendous contrast between the power of unstoppable offense and unbreakable defense.

The best pure football battle of the weekend.

What is … Rams at Packers?

The Prayer, Unanswered
In our Black History Month series, RJ Young looks at the career of Eldridge Dickey, the first Black QB selected in the first round of the draft.
13 hours ago

Watching Watson
The Deshaun Watson saga in Houston continues, as despite Watson's face-to-face with the coach, the Texans aren't willing to budge.
14 hours ago