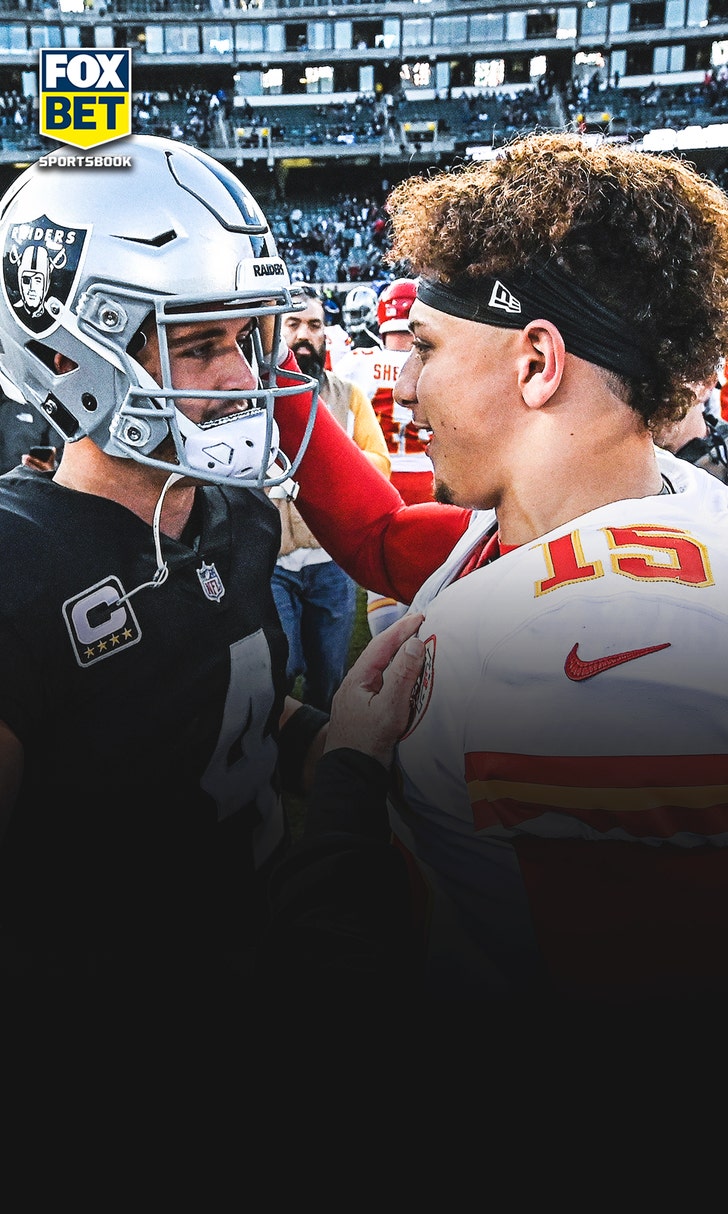 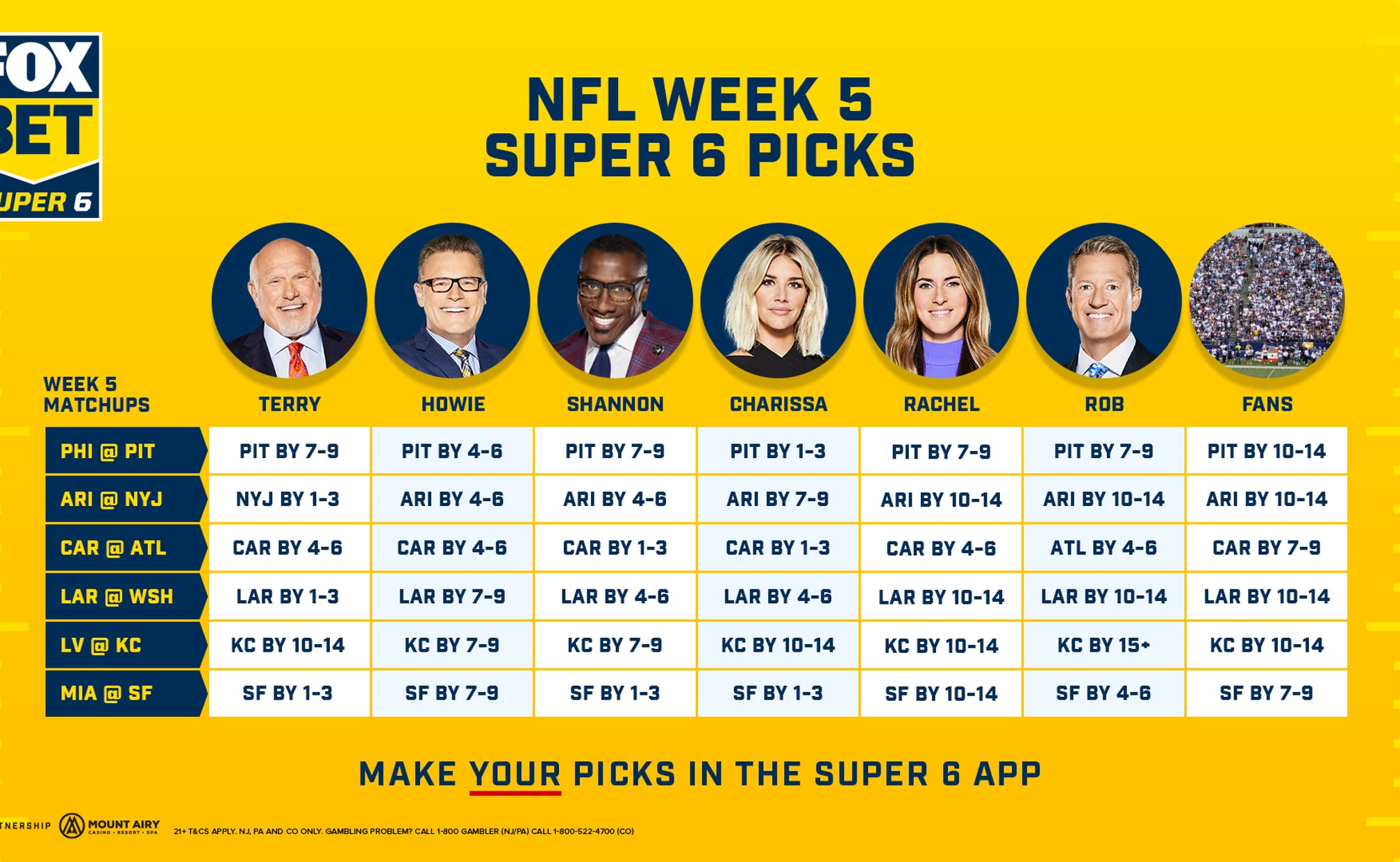 A Super Week 5 In The NFL

The Battle of Pennsylvania, a classic rivalry in the AFC West and a few teams trying desperately to get back on track are among the highlights of Week 5 of the National Football League.

With FOX’s Super 6 game, you can pick all of those games and earn the chance to win $100,000 by picking all six games successfully. And it’s free when you download the FOX Super 6 app on your cell phone or tablet devices. Even if you don’t pick the winner of all six games correctly, you could still win some great prizes.

Here’s a look at this weekend’s action.

Like a presidential cycle, the two teams in the Keystone State get together every four years in what usually is a huge contest. The two quarterbacks – Carson Wentz (Eagles) and Ben Rothlisberger (Steelers) – are the standout performers in this one. However, both teams have weapons in the backfield with Miles Sanders (Philadelphia) and James Connor (Steelers) that could decide the winner of this one. The road team hasn’t won in this series since Philadelphia’s 26-23 win over the Steelers in Pittsburgh back in 2000.

Who do you like in the Battle of Pennsylvania? Download the FOX Super 6 app and you could win up to $100,000 by picking all six NFL games on the docket. It’s free and it’s fun. Try it today at the App Store and Google Play.

Arizona has dropped two straight games after a strong start. But nothing has made teams feel better than facing the Jets, who will be without starting quarterback Sam Darnold. Former Super Bowl MVP Joe Flacco will start at quarterback for New York, who is the second-worst team in the NFL in points per game. Kyler Murray has been an offensive force for Arizona.

Will the Cardinals get back on track or will the Jets breakthrough for their first win? With FOX Super 6, you could pick the winner of six NFL games and take a crack at $100,000. Download the app today.

Matt Rhule’s Carolina team has won two in a row even without star running back Christian McCaffery. The combination of quarterback Teddy Bridgewater and wide receiver Robby Anderson has begun to click in the passing game.

Meanwhile, the Falcons are reeling after blowing two huge leads at Dallas and to Chicago and must bounce back after a Monday night loss at Green Bay. Matt Ryan is still an offensive force for Atlanta, but Julio Jones has been battling hamstring injuries that have slowed him down.

Who wins this battle of the NFC South? With FOX Super 6, you can pick the winner and take a shot at potentially $100,000 in prizes while playing for free. Download the Super 6 app on App Store or Google Play.

The Rams make their third trip in five weeks to the Eastern time zone with a chance to complete a sweep against the four teams in the NFC East. Rams QB Jared Goff is off to the best start of his career under the tutelage of Sean McVay, the former Washington assistant coach making his first return back to the District as a head coach. Meanwhile, Washington coach Ron Rivera pulled the plug on Dewayne Haskins as his starting quarterback, moving backup Kyle Allen into the starting role. Washington has lost three straight games by 14 or more points.

Do the Rams keep going or can Washington bounce back? With FOX Super 6, you can bet and take a shot at great prizes. If you win all six games, you can win $100,000. Download the app at the App Store or Google Play.

The classic AFC West rivalry adds another chapter on Sunday. The defending Super Bowl champion Chiefs were able to hold off the New England Patriots last Monday night to stay perfect. Patrick Maholmes has already thrown for over 1,100 yards and 11 touchdowns.

Meanwhile, the Raiders have lost back to back games after a 2-0 start. Quarterback Derek Carr has protected the football well, not throwing an interception in his first four games.

Can the Chiefs remain perfect? Or will the Raiders make it a race in the AFC West? With the FOX Super 6, you can bet that game and take a chance at $100,000 if you can pick all six games right. Download the free app today.

Two teams at a critical point in their season. The Dolphins hung in there with the Seattle Seahawks last Sunday before losing 31-23. Ryan Fitzpatrick will once again start at quarterback for Miami, who has Tua Tagovailoa waiting in the wings to take over the starting quarterback job. Meanwhile, San Francisco has been battered offensively with key injuries. The 49ers could get quarterback Jimmy Garoppalo back from injury on Sunday.

It’s a big game for both teams and it could be a huge game for you on the FOX Super 6 app. If you pick that game and five others correctly, you could win $100,000. It’s free to play, so download today at the App Store or Google Play.

No purchase necessary. Open to legal residents of the US, excluding WA. 18 and older. See terms and conditions at foxsuper6.com. Sweepstakes and Prize Sponsored by TSG Interactive US Services Limited.