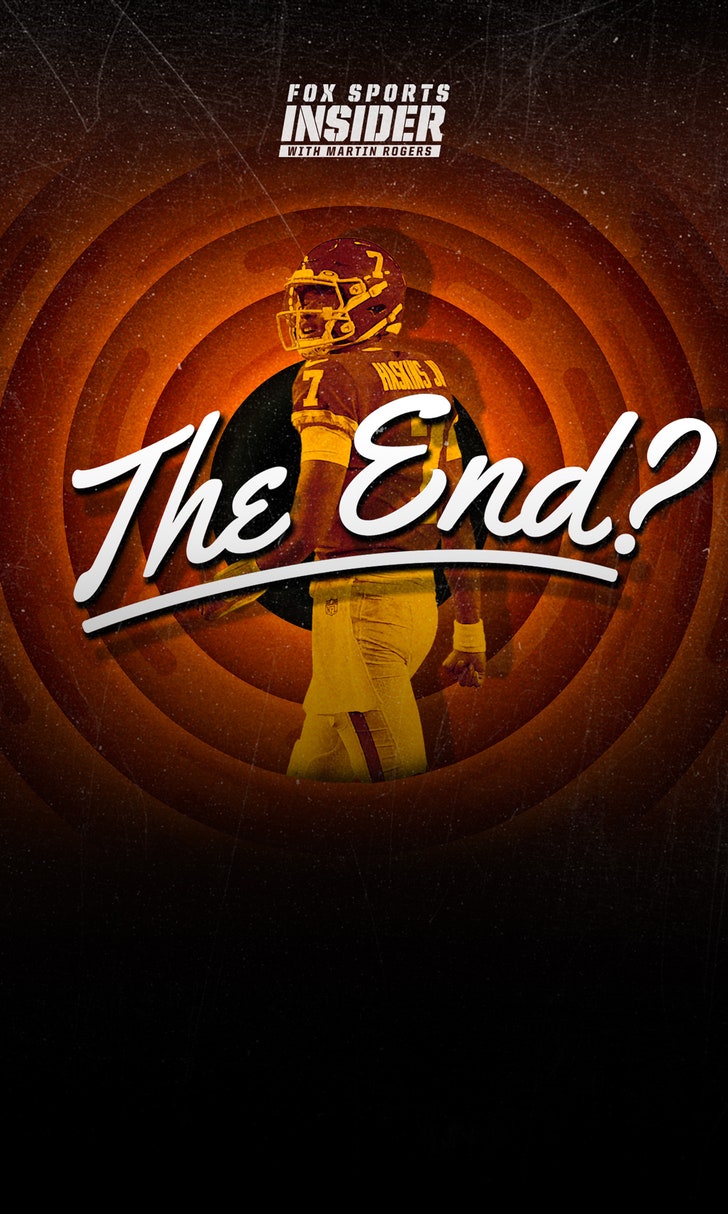 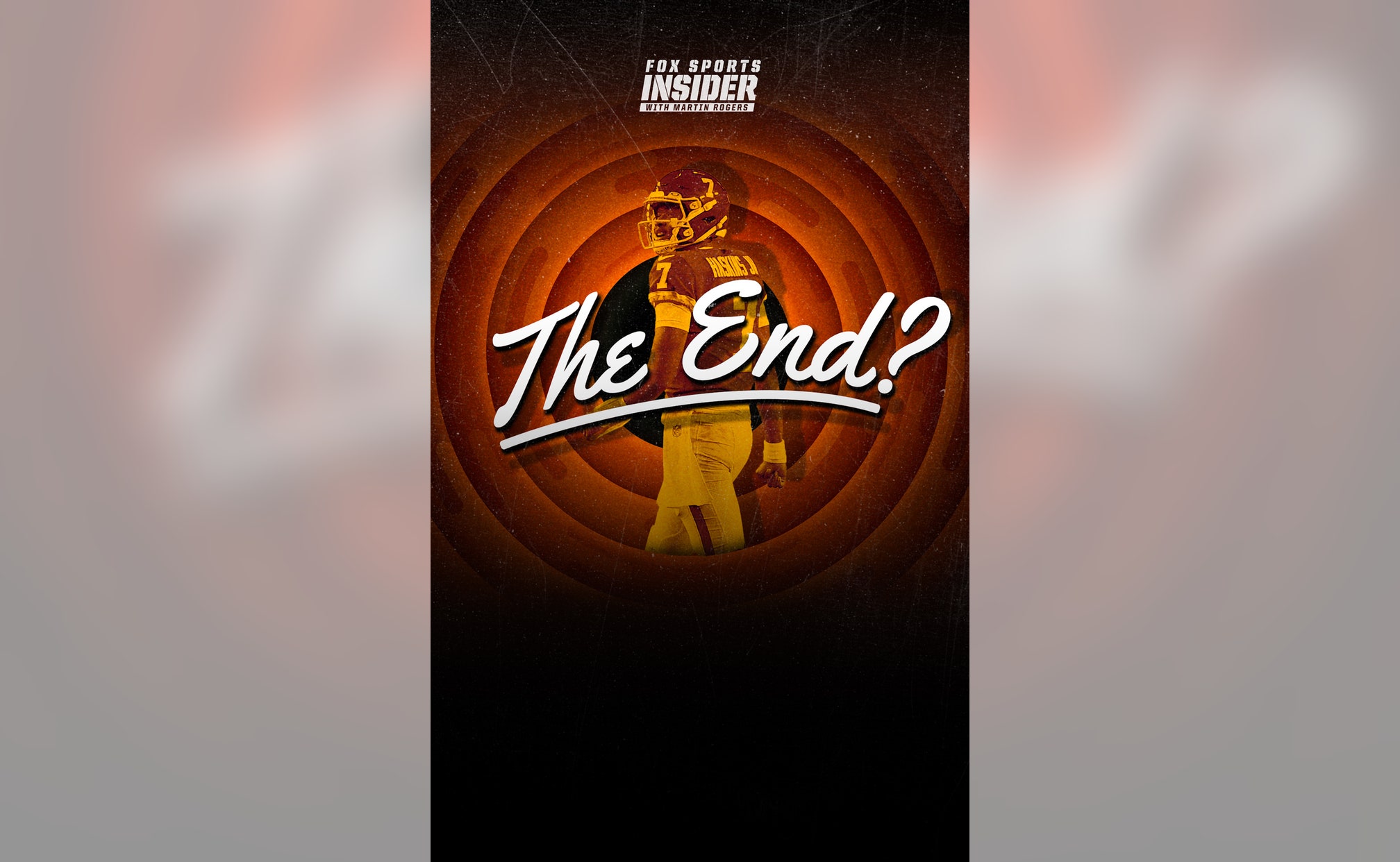 previous story
Can Gonzaga Run The Table?
next story
Cutting Through The Chaos
National Football League

Haskins' Downfall & What Comes Next

The career path of a National Football League quarterback unfolds like a novel, complete with twists and turns and dramatic evolutions, and triumphs and tragedies.

Sometimes the tale lasts so long to provide sufficient information for a mountainous tome. Often it is barely enough for a single chapter.

Dwayne Haskins has spent 613 days in the NFL and now two full days outside it, which means he already counts as old news, which is one step removed from being forgotten entirely.

If there is more to be written about Haskins, who has already attracted reported interest from several teams after clearing waivers, it will be done so with the most skeptical of eyes, after he was bumped out of the Washington Football Team franchise 20 months after being anointed as its future.

Haskins was the author of his own downfall, and thus the primary reason why his journey to the waiver wire had a miserable arc. There were plenty of spicy moments and elements of farce and if you believe it is all his fault - every bit of it - you’ll find good company.

In truth, there is a little more to it than that, and a lot of unavoidable drama to talk about first.

"He is 100 percent of the blame for what happened to Dwayne Haskins," Hall of Famer Shannon Sharpe said on FS1’s Undisputed. "As long as production is high, tolerance will be high. Haskins did not build up the on-field cache. You have to understand where we are in 2020, today’s society. One guy can upset and blow the whole thing up. How long did you think they were going to let this happen?"

Haskins certainly carries the lion’s share of the culpability, yet there were also reasons and factors that suggest there was very little likelihood of him succeeding to begin with. The problem is that if you give your detractors so much juicy ammunition to poke holes in your case for redemption, they never quite make it to the bit where the mitigating factors get discussed.

Last weekend, in advance of Washington’s 20-13 defeat to the Carolina Panthers, Haskins was photographed at an event with strippers to celebrate his girlfriend’s birthday. It is the kind of thing that would be borderline comical if it wasn’t 2020, when the ramifications of inadvisable behavior must be seen through a far more serious lens.

The emergence of partying photos at the most pivotal point of a season when Washington remains the favorite to win the awful NFC East wouldn’t play well at the best of times.

When it happens during a pandemic, in flagrance of strict protocols, during a campaign that has seen some team’s rosters ravaged by the coronavirus and when your franchise’s head coach is an immunocompromised cancer patient, it is about as ludicrous as it gets.

Nope, this isn’t one of those shake-the-head and chuckle in bewilderment type of deals. It was just stupid.

It is also the sort of behavior that gets remembered and becomes part of your narrative much more than other things that might be more relevant to the way you actually perform.

For there are issues in Washington that will not be fixed by simply booting a 23-yeard-old QB out of the building. The organization has a horrible history of choosing first-round QBs that dates way back further than Haskins, who was the 15th pick out of Ohio State in 2019.

There was dysfunction all around his selection and his time in Washington. Team owner Daniel Snyder was behind the Haskins pick when his coaching staff back then reportedly was firmly opposed. When Ron Rivera came in during the offseason, he made it clear he was never fully sold on Haskins.

"The Washington organization itself shares in the big-picture blame for Haskins' downfall," NFL.com’s Judy Battista wrote. "Haskins was thrust into circumstances that would have made it difficult for anybody to succeed, and he was operating in a particularly bright spotlight because he was drafted by his hometown team."

Haskins’ numbers were not good but maybe not as bad as you would think. Yet again, the positives get obscured when there is word of other detriments. According to the Washington Post, Haskins developed a reputation of being a poor studier with bad game prep habits, who didn’t listen, who once took a fan selfie during a game and would celebrate his rare high yardage performances in the locker room even if the team lost.

That all added up to him being seen as a poor influence, while Alex Smith, who will start against the Philadelphia Eagles on Sunday if fit, is regarded as one of the most upstanding people in the NFL and a shoo-in for Comeback Player of the Year.

In terms of output though, their stats are actually near-identical. Smith has managed four touchdowns to six interceptions, Haskins five to seven. Smith has thrown for 1,420 yards, Haskins 1,439.

One inspires a level of confidence, the other does not. Smith is seen as a figure of inspiration after recovering from a life-threatening leg injury. Haskins, now, is the guy who partied with strippers and ignored COVID. Again, perception.

There are not many people on Haskins’ side right now. This may not be a popular opinion but part of me feels a sense of empathy for him. He clearly didn’t handle himself well or gel with his teammates, but he wouldn’t be the first person to act up and behave in that manner.

A lifetime of inscrutable hard work can, if you are immensely gifted and blessed with fortune along the way, grant you an opportunity. Yet just as Trevor Lawrence’s reward for departing college as one of the most complete quarterbacks ever to enter the NFL might be a spot at one of its worst franchises, you rarely get to pick what your chance looks like.

However, when things go wrong, especially if you are seen as the architect of your own demise, no one has a lot of pity.

It is a cold reality and part of every quarterbacking story. Haskins made the right statements this week, but who knows if he can turn those sentiments into positive action.

"I take full responsibility," Haskins said in a statement. "(I) will become a better man (and) player because of this experience."

Words to live by … and a career that is one more failure away from turning into nothing. If Haskins wants a happy ending now he’ll have to write it himself.

He should see the next opportunity - no matter what it looks like and whatever in-built obstacles there are – as not just a second chance, but a last chance.

One More Matchup For The Ages
Tom Brady and Drew Brees have faced countless big occasions before, yet Sunday’s showdown between the Bucs and Saints feels different.
24 mins ago

Bills Pick Off Ravens To Advance
A low-scoring first half gave way to one explosive, game-changing play. Here's how Buffalo knocked off Lamar Jackson & Co.
11 hours ago