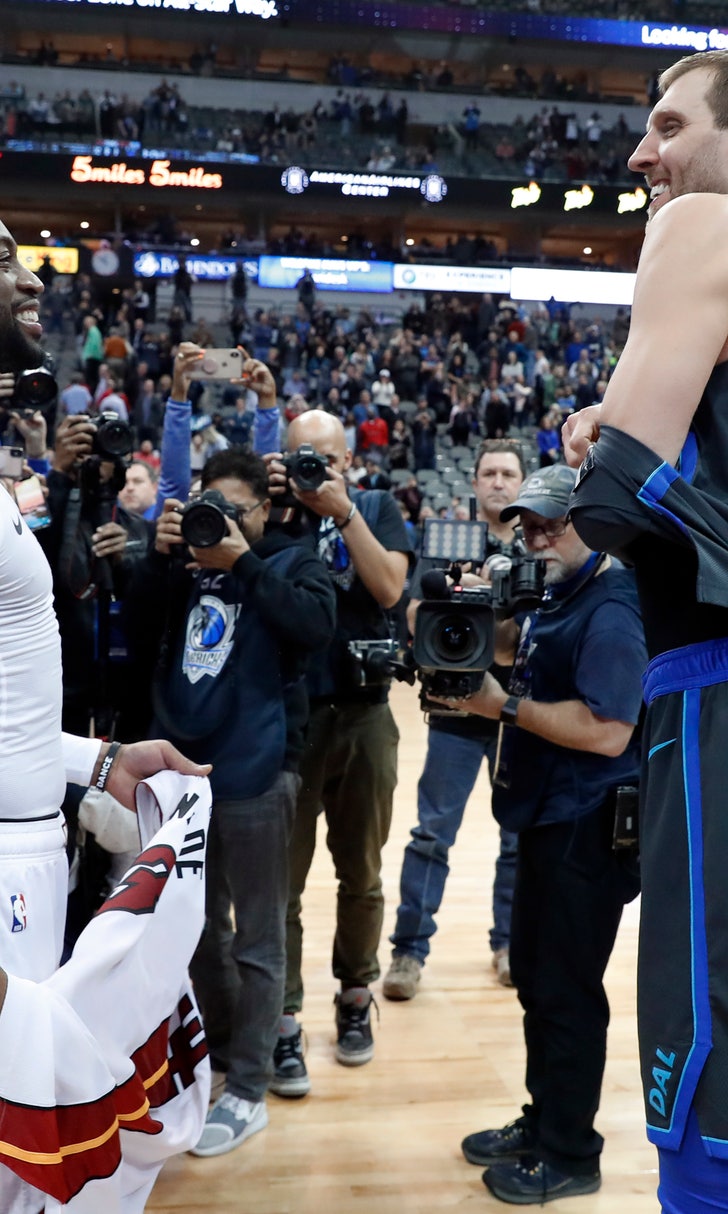 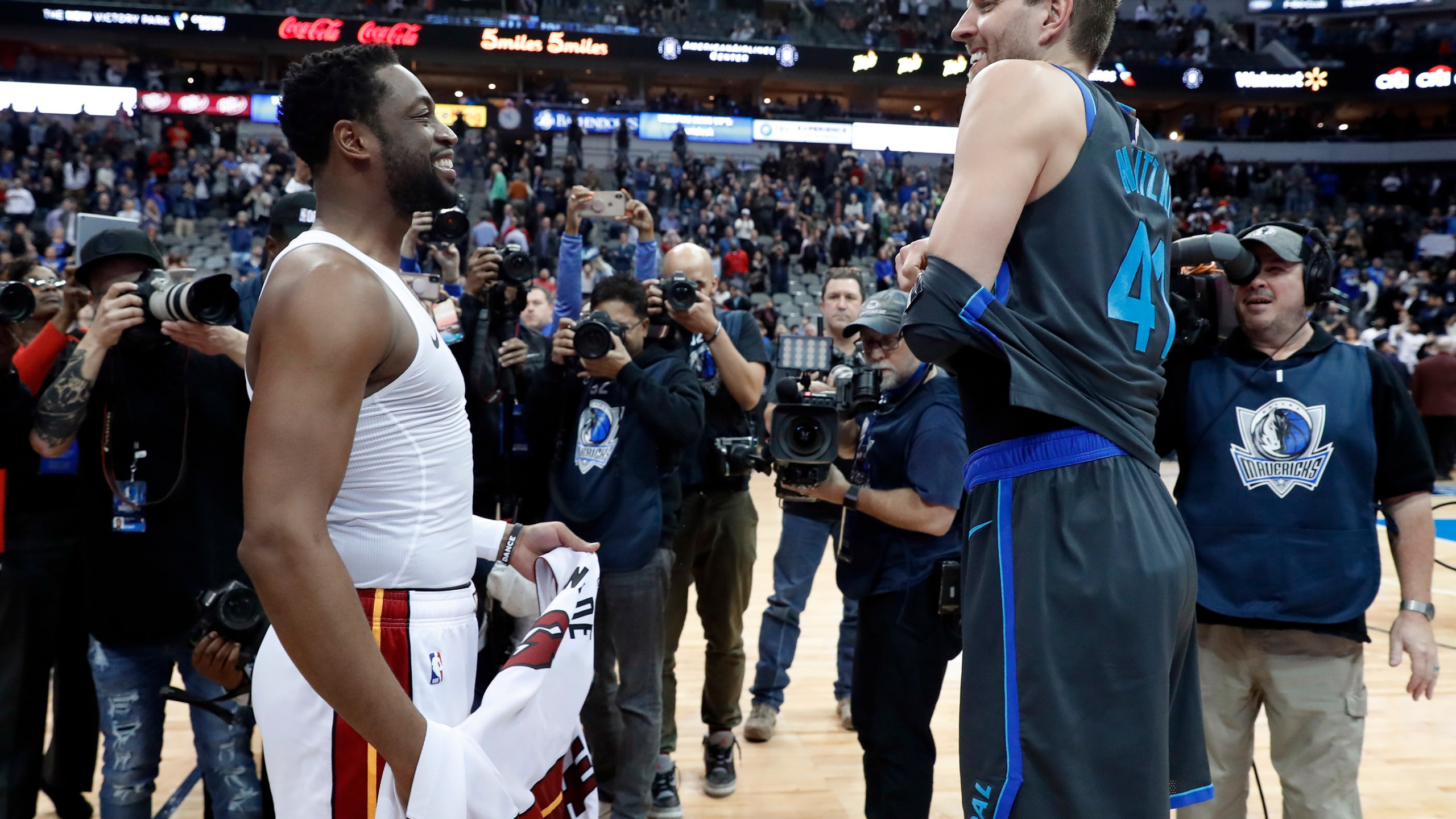 DALLAS (AP) — Of all the opposing jerseys Dwyane Wade has collected through swaps during his final NBA season, Dirk Nowitzki's was among those the Miami star wanted the most and somehow seemed worried he wouldn't get.

Maybe it had something to do with the "frosty" phase of their relationship, as the Dallas icon described the strain following the Heat's six-game win over the Mavericks in the 2006 NBA Finals. Maybe Wade thought such a display wouldn't be possible on Dallas owner Mark Cuban's court.

In reality, Wade didn't need to worry about Nowitzki turning him down.

The two-time Finals foes are elder statesmen in their league now, a co-existence better defined by sharing honorary All-Star status for the NBA's biggest party than bitterness over a championship lost to a rival.

"You appreciate having someone like that that's a part of your journey, that pushes you," Wade said, a few hours before that jersey swap took place near midcourt following Miami's 112-101 victory in Dallas on Wednesday. "We're an important part of each other's story."

NBA Commissioner Adam Silver added Wade and Nowitzki as All-Star extras for Sunday's game in Charlotte, North Carolina, with the 37-year-old Wade already saying his 16th season will be his last and the 40-year-old Nowitzki's record 21st season with the same franchise having the feel of an unofficial farewell tour.

After winning his first title on Dallas' home court in 2006, Wade wasn't thrilled with complaints that the Heat — and their star player in particular — got a huge assist from the officials. He eventually shot back that the Mavericks might have won with better leadership from Nowitzki.

When Nowitzki was on his way to payback with a title five years later, Wade and LeBron James mocked Nowitzki by faking coughs in front of cameras after that year's finals MVP made the decisive bucket in a critical Game 4 win while playing with a fever.

Those days are long gone, replaced by mutual admiration for players in supporting roles on teams with little hope of winning titles after years as pressure-laden leading men for franchises that were among the elite.

"I always say he pushed me to become the player in '11 to ultimately win," Nowitzki said. "There were some things said after the '06 finals, and both sides didn't love it. There were some times that we didn't speak much. But I always watched from afar."

Wade won his second and third titles — both with James — the first two years after losing to the Mavericks. He essentially says the same thing about his experience of losing to Nowitzki.

"We don't lose that Finals in '11, we're still going, me and 'Bron still fighting it out to see who's the best," Wade said. "I took a step back at that point to kind of let him take over, an organization that I would call mine before that."

The Mavericks haven't won a playoff series since taking the franchise's only title and have ground to make up if they want to avoid missing the postseason for the third straight year.

The Heat had one playoff series victory in the four years after going to the Finals in each of James' four seasons. Miami has more realistic playoff hopes than Dallas this year, but only because the Eastern Conference is more forgiving.

None of that will matter as the All-Stars celebrate two players with 27 appearances between them. This will be 14 for Nowitzki, the German who is the only foreign-born player among the NBA's seven 30,000-point scorers, and 13 for Wade.

"Dirk is one of the first guys to have ever done it from overseas," said Milwaukee's Giannis Antetokounmpo, the "Greek Freak" who is an All-Star captain alongside James. "Hopefully, all the other international guys and overseas guys can do the same thing for the next generation."

The most competitive part of Nowitzki's weekend will come in the 3-point contest Saturday night — he's the only 7-footer to win it (in 2006). And he'll be one of the coaches in the Rising Stars game, leading 19-year-old Dallas rookie sensation Luka Doncic.

As for the game, Nowitzki expects his role to be about like that of an extra in the movies — very, very minor.

"It's going to be fun to be part of and watch, maybe coach some, maybe get in for a minute or two," the 2007 NBA MVP said. "But really I think that game is more about the guys that deserve to be there and got voted in."

The other guy who didn't get voted in has similar feelings.

"Me and him have had our fair share of All-Star games," Wade said. "This is a lot different for what we're looking to get out of it. I'm glad it is me and Dirk. I think it fits. I think it's right and I'm appreciative of it."

For Nowitzki, it's no secret why it fits better now than it did eight years ago.

"We're older," Nowitzki said. "When you're young, you compete, you're stubborn. There was a few guys where I was just not that friendly with. We played against the Spurs every year in the playoffs, and I didn't love them guys either."

Turns out it's nothing personal.