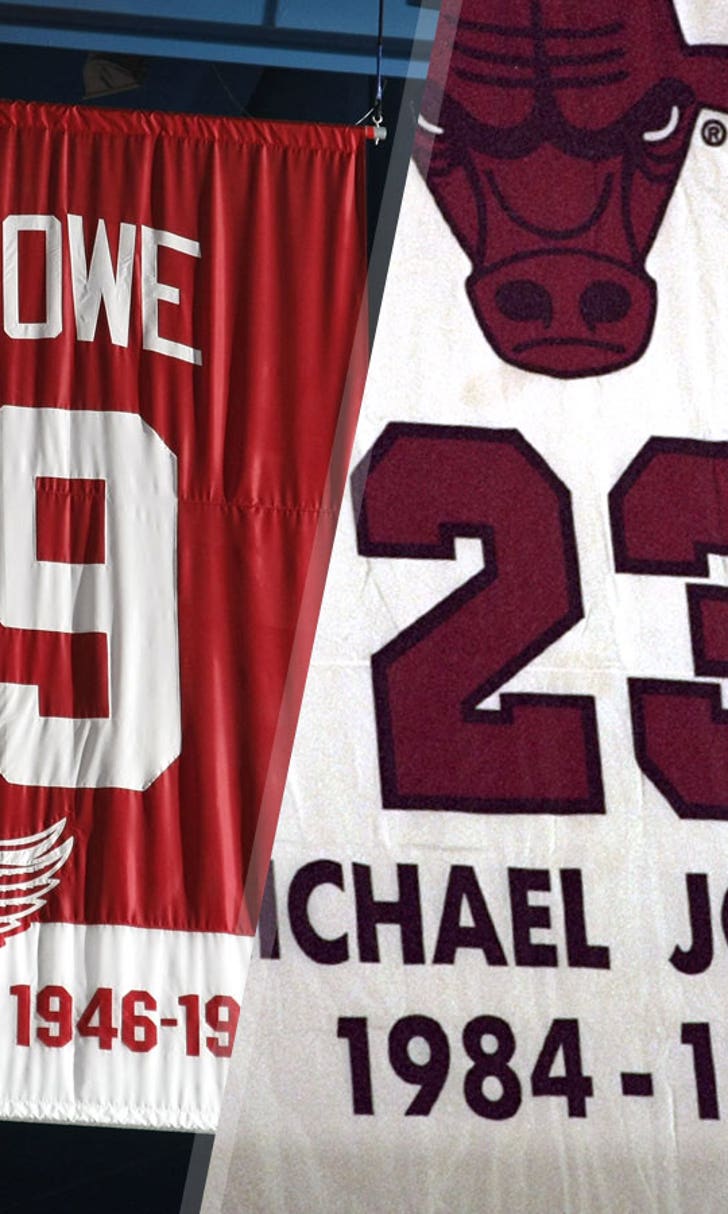 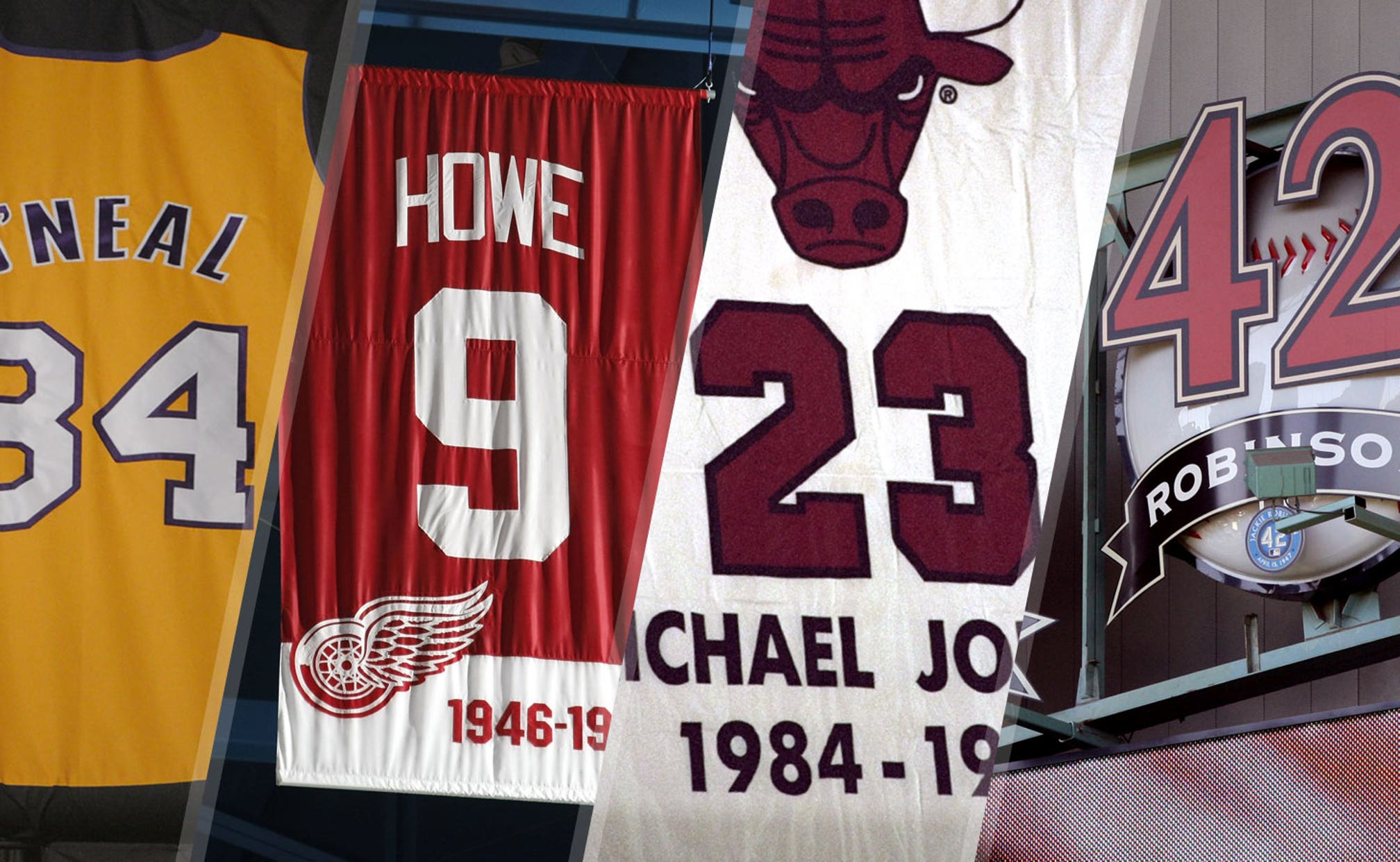 Shaq and 31 more athletes with numbers retired by multiple teams 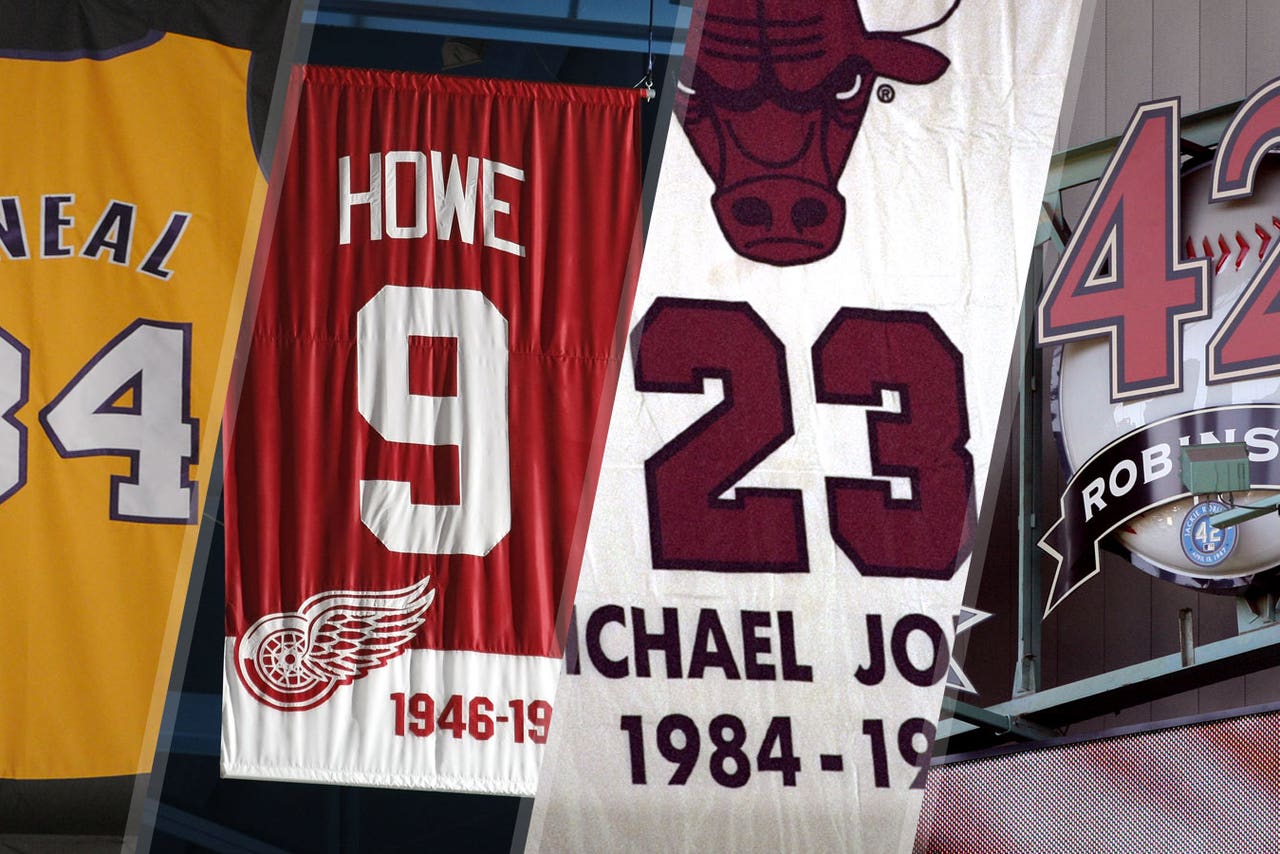 The Miami Heat announced the organization will retire Shaquille O'Neal's jersey -- No. 32 -- during the 2016-17 season, making it the second NBA franchise after the Los Angeles Lakers to raise The Big Aristotle's jersey to the rafters. Shaq's number has also been retired by the LSU Tigers and Robert G. Cole High School.

The NFL's Minister of Defense is the only player in the league to have his number retired by two organizations (so far). Following his death in 2004, both the Philadelphia Eagles and the Green Bay Packers retired No. 92 during the 2005 season. His alma mater, the University of Tennessee also retired his number in 2005.

Sir Charles joined the Phoenix Suns' Ring of Honor in March 2004 when his No. 34 was retired. The Philadelphia 76ers retired his number three years earlier in 2001. Auburn also raised No. 34 to the rafters the same year.

The first team to retire Chamberlain's No. 13 was the Los Angeles Lakers in November 1983. The Philadelphia 76ers followed in March 1991 and the Golden State Warriors retired it in December 1999. Chamberlain's number was also retired by Kansas in 1998.

Drexler played for two teams during his NBA career: the Portland Trail Blazers, who retired his No. 22 in March 2001, and the Houston Rockets, who retired his number in February 2000. Drexler finished his career with more than 20,000 points as well as 6,000 rebounds and 3,000 assists.

Dr. J's first professional retirement ceremony came while he was still playing. During a final appearance against the Nets in 1987, the organization honored him by retiring his No. 32 in recognition of his time with the ABA's New York Nets. The second ceremony came when the 76ers retired his No. 6 in April 1988. The UMass Minutemen have also retired No. 32 in honor of Erving.

When MJ returned to the Chicago Bulls for the start of the 1995 season, he couldn't wear No. 23 … because it was retired. When Jordan announced his would be leaving basketball to play baseball, the Bulls retired his number in November 1994. After he announced his final retirement during the 2002-03 season, the Miami Heat retired No. 23 during Jordan's final trip to South Beach for his contributions to the game. North Carolina also retired No. 23 in recognition of Jordan's time in Chapel Hill.

The Milwaukee Bucks retired No. 16 in December 1984 to honor Lanier. A year after his 1992 induction to the Naismith Memorial Basketball Hall of Fame, the Detroit Pistons also retired No. 16. In 1970, his college number, 31, was retired at St. Bonaventure.

The NBA's Chairman of the Boards had his No. 24 retired by the Houston Rockets in November 1998. The Philadelphia 76ers announced plans to retire his No. 2 during the 2016-17 season. Malone finished his career with more than 28,000 points and 17,000 rebounds.

Pistol Pete spent the majority of his career playing for the New Orleans Jazz. He was with the franchise when it relocated to Salt Lake City in 1979, but didn't stay long. He was placed on waivers in January 1980 due to lingering knee problems. He retired at the end of the season as a Boston Celtic. The Jazz retired his No. 7 in 1985. The New Orleans Hornets, now Pelicans, retired his number in 2002 in recognition of his contributions to the city. Maravich also had his No. 23 retired at LSU and the current Tigers' basketball teams play at the Pete Maravich Assembly Center.

Earl The Pearl's No. 15 was retired by the New York Knicks in March 1986. In 2007, the Washington Wizards retired No. 10 in honor of Monroe's years leading the Baltimore Bullets.

Robertson started his career playing for the Cincinnati Royals in 1960. When he was traded by the franchise, now the Sacramento Kings, in 1970, they honored him by retiring his No. 14. He then went and played for the Milwaukee Bucks. Robertson was the only Bucks player to wear No. 1. The organization retired the number in 1974. Robertson also was the first person in Cincinnati Bearcats history to have his number (12) retired at the completion of his senior season in 1960.

After the big man retired following the 1976-77 season, the Cleveland Cavaliers retired his No. 42 the following December. The Golden State Warriors followed soon after and retired his number in March 1978.

Hammerin' Hank played his final MLB game in October 1976. The Milwaukee Brewers retired No. 44 at the end of the season. The Braves organization retired his number during their 1977 home opener.

Anderson only played one season in the MLB, but it was his time as a manager that earned him the honor of having his number retired. The Cincinnati Reds retired No. 10 in 2005 in recognition of Anderson's eight years and two World Series titles with the organization. The Detroit Tigers retired No. 11 in June 2011 in recognition of his 17 seasons with the club and his 1984 World Series win.

The Boston Red Sox announced they will retire Boggs' No. 26 on May 26 this season. They will become the second team to retire his number. The Tampa Bay Devil Rays retired his No. 12 in April 2000.

After recording more than 3,000 career hits and earning seven AL batting titles, both the Minnesota Twins and California Angels retired No. 29 in his honor. The Twins retired it in July 1987 and the Angels in August 1986.

The relief pitcher (and his famous mustache) were inducted into the National Baseball Hall of Fame in the class of 1992. To honor him, the Milwaukee Brewers retired No. 34 in August 1992, and the Oakland Athletics retired it in 1993.

Mr. October won three (in a row) World Series titles with the Oakland Athletics. The team retired his No. 9 in 2004. Jackson also won two World Series championships with the Yankees during his career. The Bronx Bombers retired his No. 44 in 1993. Though he only played one year at Arizona State, the Sun Devils retired No. 44 in his honor in 1990, though he wore No. 24 there during his playing days.

Maddux retired from Major League Baseball at the end of the 2008 season. During the 2009 season, both the Chicago Cubs and the Atlanta Braves retired the pitcher's No. 31. The Cubs honored Ferguson Jenkins, who also wore 31, in the same ceremony.

Robinson became the first player to have his number retired by the Baltimore Orioles when they retired No. 20 in December 1971. More than 25 years later, the Cincinnati Reds retired No. 20 as well in May 1998.

The Los Angeles Dodgers retired No. 42 in June 1972 in honor of Robinson's time with the then-Brooklyn Dodgers. On April 15, 1997, Major League Baseball retired No. 42 league-wide on the anniversary of Robinson breaking the color line in baseball. On the same day in 2004, the league held the inaugural "Jackie Robinson Day." In November 2014, his alma mater UCLA announced it would also retire his No. 42 across all sports.

The Ryan Express pitched for four teams professionally, and had his number retired by three of them. While he was still playing, the Angels retired his No. 30 in June 1992. In September 1996, both the Texas Rangers and the Houston Astros retired No. 34 in separate ceremonies.

The Old Professor spent 54 years in professional baseball as both a player and manager. Both the New York Mets (1965) and the New York Yankees (1970) retired his No. 37 in recognition of his years as manager for the clubs.

Bourque spent 20 full seasons with the Boston Bruins. The team retired his No. 77 sweater after he retired in October 2001. Bourque also spent 15 months with the Colorado Avalanche and won a Stanley Cup. His No. 77 became the first number retired by the Aves in November 2001.

The Great One retired at the end of the 1999 NHL season and it didn't take long for his number to be retired. The team he started his career with, the Edmonton Oilers, retired his sweater in October of the same year. The NHL retired No. 99 league-wide during the 2000 All-Star season. The Kings raised Gretzky's sweater to the rafters in 2002 and built a statue of him outside Staples Center.

After playing 26 seasons in the NHL, Howe had his number retired by two NHL franchises. The Detroit Red Wings retired his No. 9 in March 1972. The Hartford Whalers, now Carolina Hurricanes, retired it in February 1981.

The Chicago Blackhawks retired The Golden Jet's No. 9 sweater in December 1983. The Winnipeg Jets retired Hull's number in 1989. When the franchise moved to Arizona, the team took the number with them. The Coyotes briefly unretired No. 9 so Hull's son Brett could wear it during the 2005 season.

Roy's No. 33 was retired by the Colorado Avalanche in October 2003 and by the Montreal Canadiens in November 2008. The goalie recorded more than 500 wins in his career, including 66 shutouts.