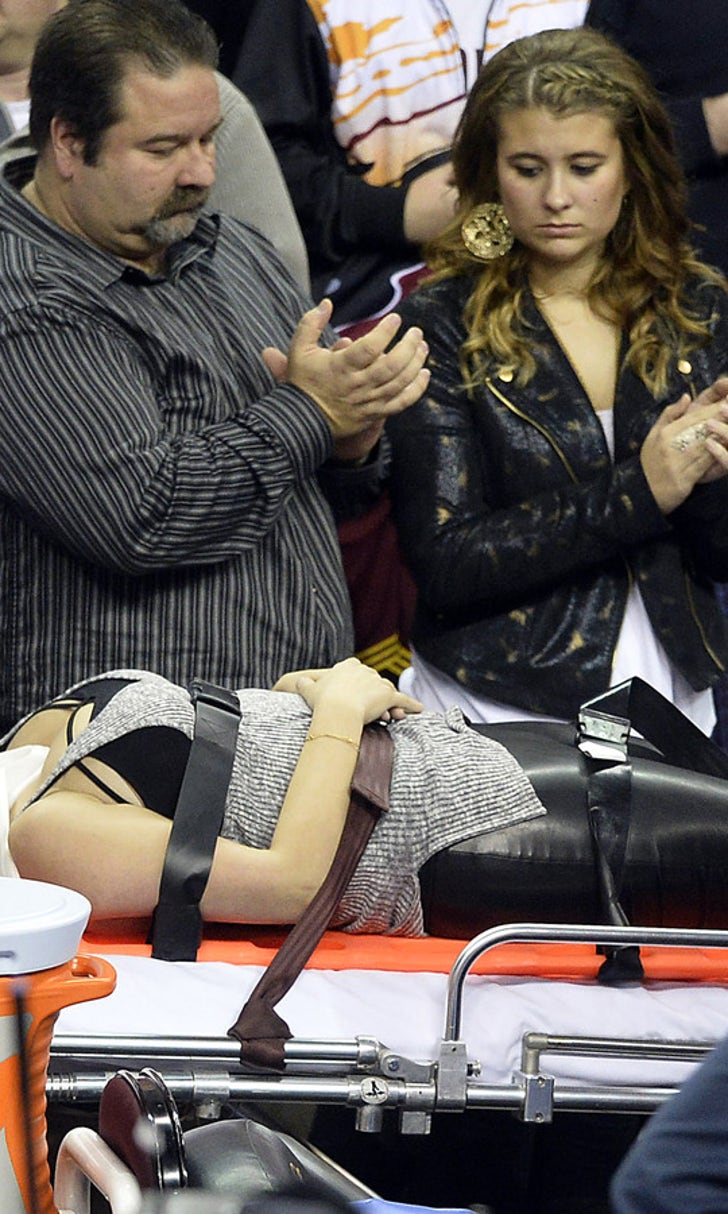 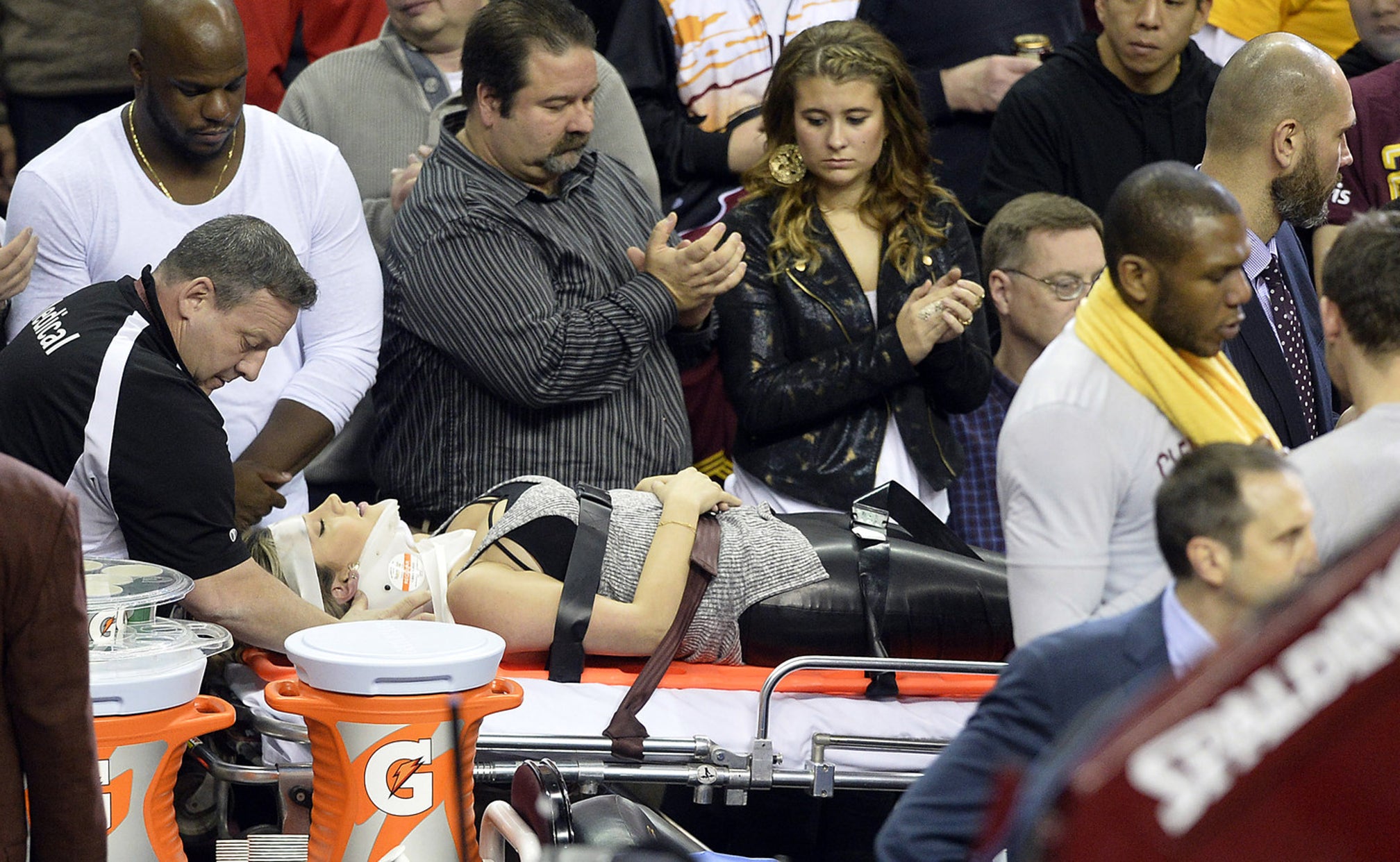 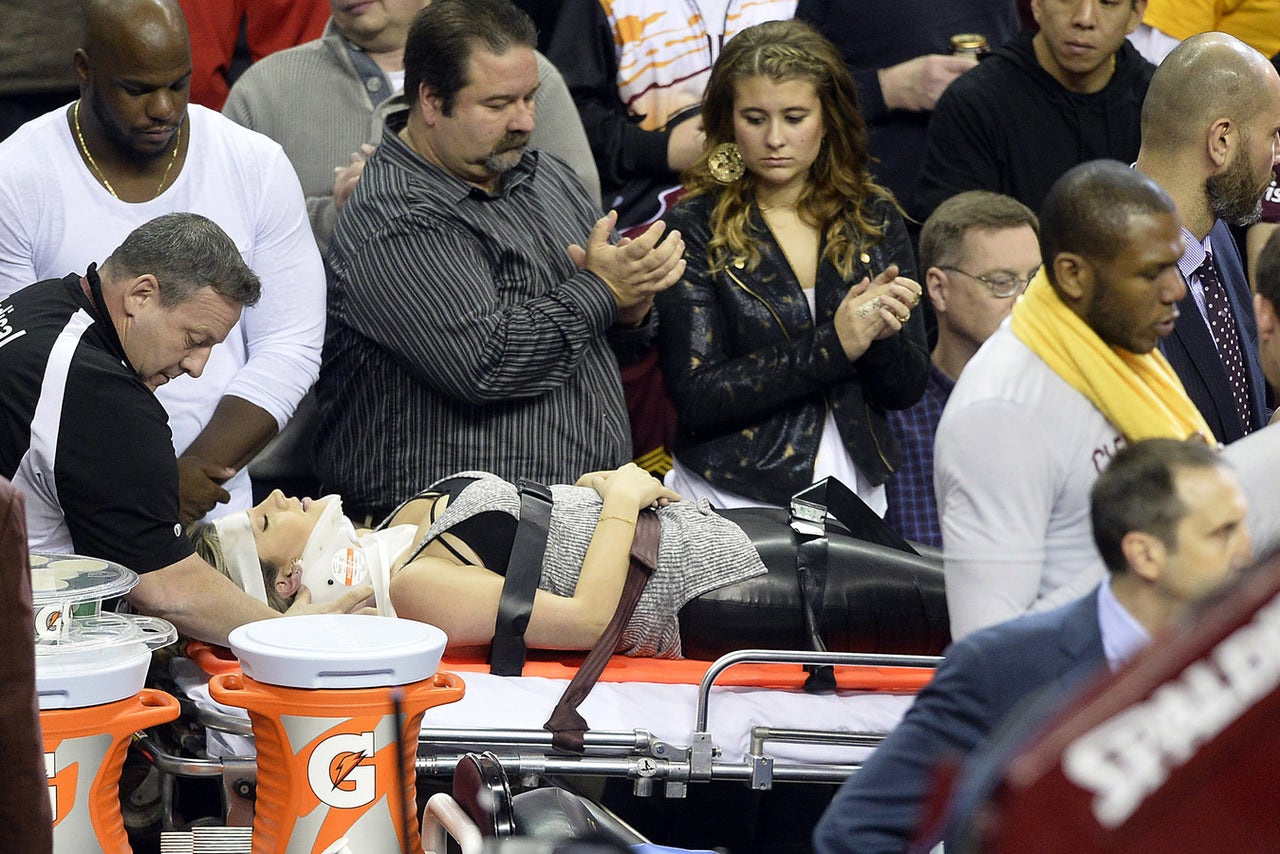 The morning after a vicious sideline collision with Cleveland Cavaliers star LeBron James, the wife of golf star Jason Day is suffering from concussion symptoms.

The Associated Press reported the update Friday, but don't worry, Ellie Day is still a fan of LeBron and the Cavs:

Great to see her in good spirits after the hit, which happened as LeBron tried to track down a loose ball during the fourth quarter of Thursday's game against the Oklahoma City Thunder. Ellie happened to be in the fateful seat:

LeBron checked on her during a stoppage in play, and Ellie Day was eventually stretchered out of the arena. She went to the hospital and was released Friday.

The wife of PGA champion Jason Day is suffering from concussion symptoms after NBA star LeBron James crashed into her during a Cavaliers game.

"First of all, I am OK!!" Ellie Day tweeted Friday. "I am incredibly sore and exhausted. Being tackled by that large man would compare to a minor car accident. My head and neck hit pretty hard so it was really scary. My whole body feels like it was hit by a truck.

"Second, it was so fast. I didn't remember until 2 a.m. seeing the ball come toward me. It was a blur. To the crazies that think Jason should have protected me — if he had had time to react, so would have I. Also, I would not have liked both dudes landing on me. LeBron is huge and had such momentum he could not have stopped!!"

In the statement, she thanked her doctors, emergency medical staff and the entire Cleveland Cavaliers organization for their help.

James said he spoke with Ellie Day while she was being helped by medical personnel during a stoppage in play.

"I squeezed her hand and she said she was OK," he said. "She was just a little weary."

Before he was given more information on her, James, who scored 33 points and flirted with a triple-double, was noticeably shaken when he left the floor following the Cavs' win.

"For me, obviously, her health is very important and hopefully she is doing well," James said. "The guys told me she's doing great now. For me, just going for a loose ball, tried to keep the possession going, I just hate that that was the end result."

James said if she had been pregnant, he would have jumped over the first row of seats.

A little while later, James tweeted: "Ellie Day I hope you're doing okay! My apologies! Hope u guys come back to another game soon. Love LJ!"

Jason Day, who lives in a Columbus suburb, accompanied his wife as she was carried from the floor. The couple has attended Cleveland games in the past, and she was pregnant with their second child when they went to an exhibition game earlier this year in Columbus. That night, Cavs guard J.R. Smith bought cotton candy for the Days' son, Dash, while he sat on the bench.

Jason Day is the No. 2-ranked golfer in the world. He won the PGA Championship this year for his first major win on the PGA Tour.

Shortly before his wife was injured, Jason Day took part in a promotion during a timeout. As fans cheered, the Australian chipped foam basketballs into the crowd.

Cavs coach David Blatt said he was unaware of the severity of the collision. He has long been nervous about the safety of fans sitting so close to the action.

"Honestly, the only thing I saw was LeBron diving for the ball to save the ball," Blatt said. "I kind of got blocked and just saw a sea of bodies. We all hope that she's OK. It's always concerned me, the sideline seats. Always concerned me, because things like that, when you're talking about players of this speed and physicality and effort level, it's not a simple thing.

"The powers that be are the ones that really need to decide how to deal with that. He made an honest attempt at the basketball, that's all, obviously. We all hope she's OK."

LeBron vs. MJ: The GOAT Debate Intensifies
The intensifying LeBron vs. Jordan GOAT debate is a game within the game, and it is far from being over, Martin Rogers writes.
6 days ago

The Case Against Michael Jordan
As the GOAT debate rages on, Nick Wright lays out five reasons why it's not His Airness.
6 days ago

6 Pressing Questions After the NBA Finals
Will the Lakers repeat? Is Jimmy Butler a superstar? Is LeBron the greatest Laker ever? Chris Broussard has the answers.
6 days ago
those were the latest stories
Want to see more?
View All Stories
Fox Sports™ and © 2020 Fox Media LLC and Fox Sports Interactive Media, LLC. All rights reserved. Use of this website (including any and all parts and components) constitutes your acceptance of these Terms of Use and Updated Privacy Policy. Advertising Choices. Do Not Sell my Personal Info