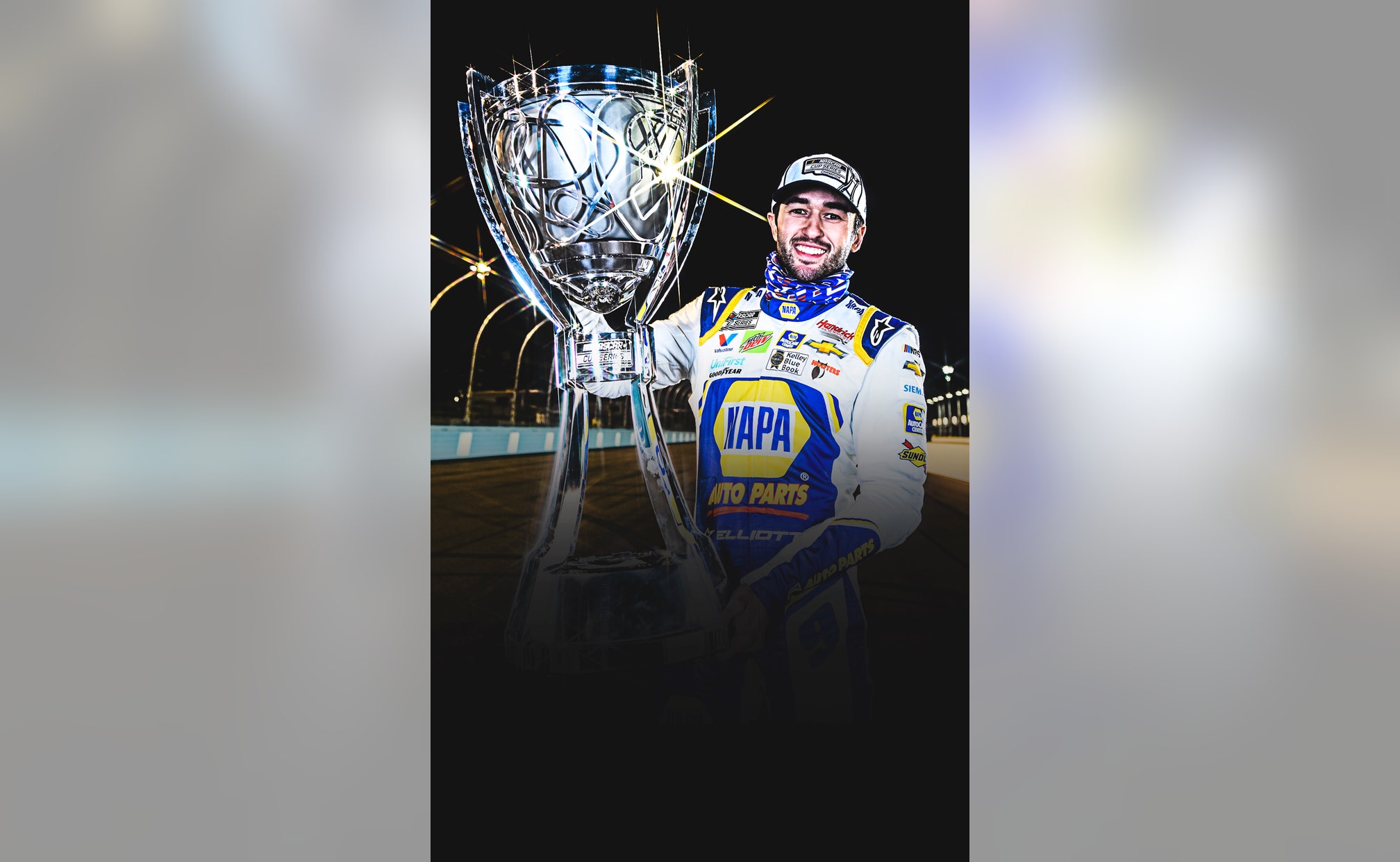 Elliott doesn’t like stats nor most conventional wisdom adages. If he hasn’t experienced it, he isn’t going to believe it.

So the 24-year-old driver wouldn’t proclaim that Sunday night marked the start of him becoming the next superstar, the next Jimmie Johnson, his Hendrick Motorsports teammate who finished his NASCAR full-time career with 83 wins and a record-tying seven titles in the same race Elliott won to capture his first championship.

“Everybody always said, I remember the road to the first race [Cup] win and they said, ‘Once you get one, the rest of them will start coming easier,” said Elliott, who needed 99 races to earn his first race win and has won nine of his last 86. “I have not found that to be so.

“I feel like they are all very difficult. You’re racing against the same people. The challenge is still there. Everybody is just as good. Everything is just as hard.”

But it’s hard not to look at Sunday at Phoenix Raceway as a pivotal moment of Elliott’s career and a point in the future 15 years from now, when he’s not even 40 and and at the age when racers tend to hit their prime, and say Sunday was a day that started it all.

And not only that, he likely will earn his third consecutive NASCAR Most Popular Driver award to become the first champion since 1988 when his father, Bill, won both the award and the Cup title in the same year.

“To see the reaction of so many fans in the stands when Chase got to the lead, it was incredible,” said Jim Campbell, who heads the motorsports program for Chevrolet. “It's indicative of his popularity, not only with the fans here in Phoenix but all over the country, all over the world.

The lift buoyed a Hendrick organization that failed to have a championship-eligible driver in the final race since Johnson won the title in 2016. The similarities to that title included Elliott having to rally from the back after his car failed prerace tech, just as Johnson did.

Elliott shrugged off the issue because he knew he had a fast car and knew he had time to make something happen. In a lot of ways, he mimicked what made Johnson successful.

“He’s a young guy,” team owner Rick Hendrick said. “I think he's going to win a lot of them.  Seven is a big number, but that's something to shoot at.

“Chase has shown so much maturity and everything by just winning these races and now the championship at 24 years old. I think he's got a lot left in his tank.”

Elliott would not look into the future beyond wanting to get with his team and start the party late Sunday night.

“Right now I'm just enjoying today,” Elliott said. “It's certainly easy to look ahead and kind of think what's next. But if there's one thing I've learned so far today, I feel like when you win a championship, it's enjoy the now.

Two of the drivers Elliott beat for the championship Sunday still seek their second title. Brad Keselowski won in 2012 and Joey Logano won in 2018. They likely will be ones battling with Elliott for titles over the next several years.

“A big moment like this really cements you in everybody's head as the real deal,” Johnson said. “It's one thing to win races, it's one thing to be fast, but to get it all done and win races and be fast and win a championship is the most difficult thing to do in our sport.

“For him to have a championship at this age and being so young, there's no telling what the win total will be for him or his championship total.”

He also has a crew chief who has worked with championship drivers and finally has a championship to call his own in Alan Gustafson, who has won races with Mark Martin, Kyle Busch and Jeff Gordon.

Elliott said Gustafson will outwork the other crew chiefs, and Gustafson indicated that Elliott’s race craft will continue to set him apart.

“Chase is not a normal 24‑year‑old person, that's for sure,” Gustafson said. “He's got the physical attributes and skill sets of a 24‑year‑old, but he's got the intelligence and the experience of someone much older and wiser, so he acts like he's a 35‑year‑old in his prime.

“He's very similar to the great champions I've worked with before, and he's going to be every bit as good or better.”

Elliott probably didn’t want to hear that. He seemed truly bewildered by the series of events the last eight days. He was living in the moment, relishing the fact that he had accomplished a feat by drivers he admired, and not the future.

“A champion in the Cup Series?” Elliott said. “Are you kidding me?  It's nuts. It's absolutely nuts.”

But it’s not nuts when looking at the 24-year-old driver’s career. He won at Darlington Raceway, possibly the toughest track on the circuit, in his first Xfinity start there on the way to the Xfinity title as a rookie at age 18.

Coming into the championship race at Phoenix, he had 10 career victories, including a victory a week earlier that he needed just to be eligible for the title. So why is it nuts?

“To win a championship, you have to perform at the highest level at the hardest time,” Elliott said. “That’s the hardest thing to do in any sporting event and certainly in racing because there are so many parts and pieces that go into that.

“I just feel like it’s nuts because up until last week, I would say we had been written off and not expected to perform in tough situations. ... A championship at the highest level of NASCAR is not something that happens every day. And I’m not taking that for granted. And that’s why it’s nuts.”

Chase Elliott is the seventh driver to win the last two races of a season.

“This is unreal.” – Chase Elliott

Timing is Everything
Becoming a NASCAR team owner, more than anything, is about finding the right time to go all in, writes Bob Pockrass.
22 hours ago