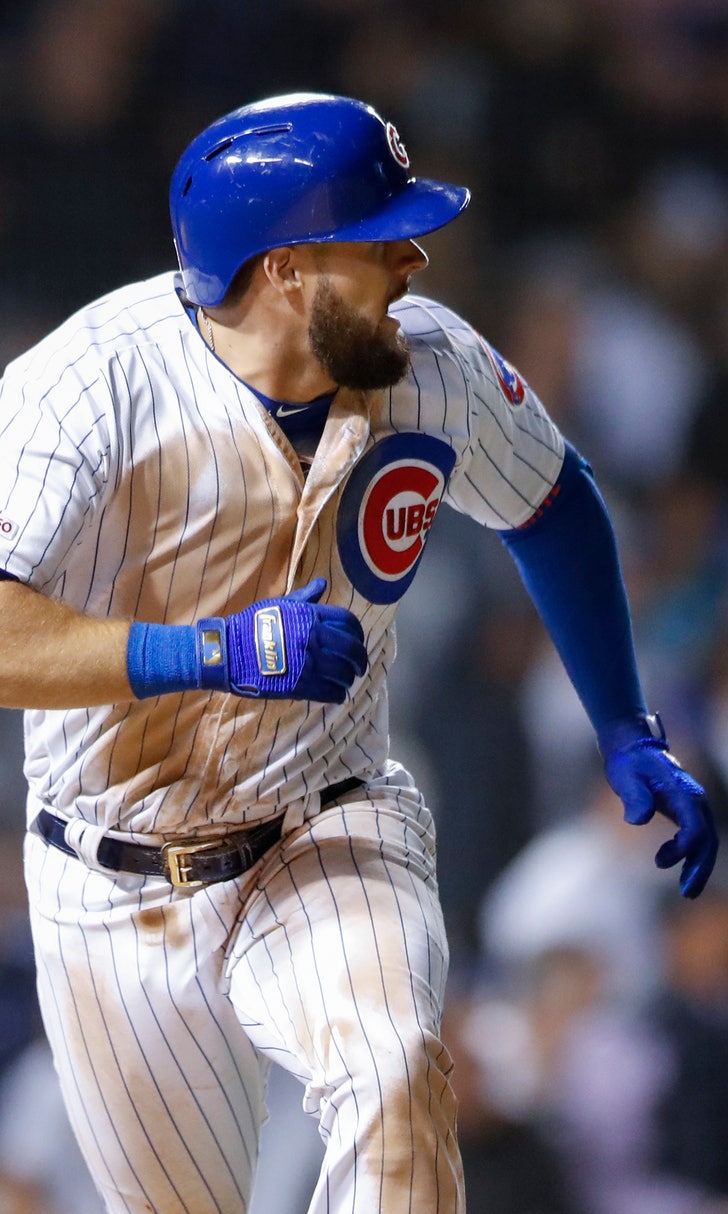 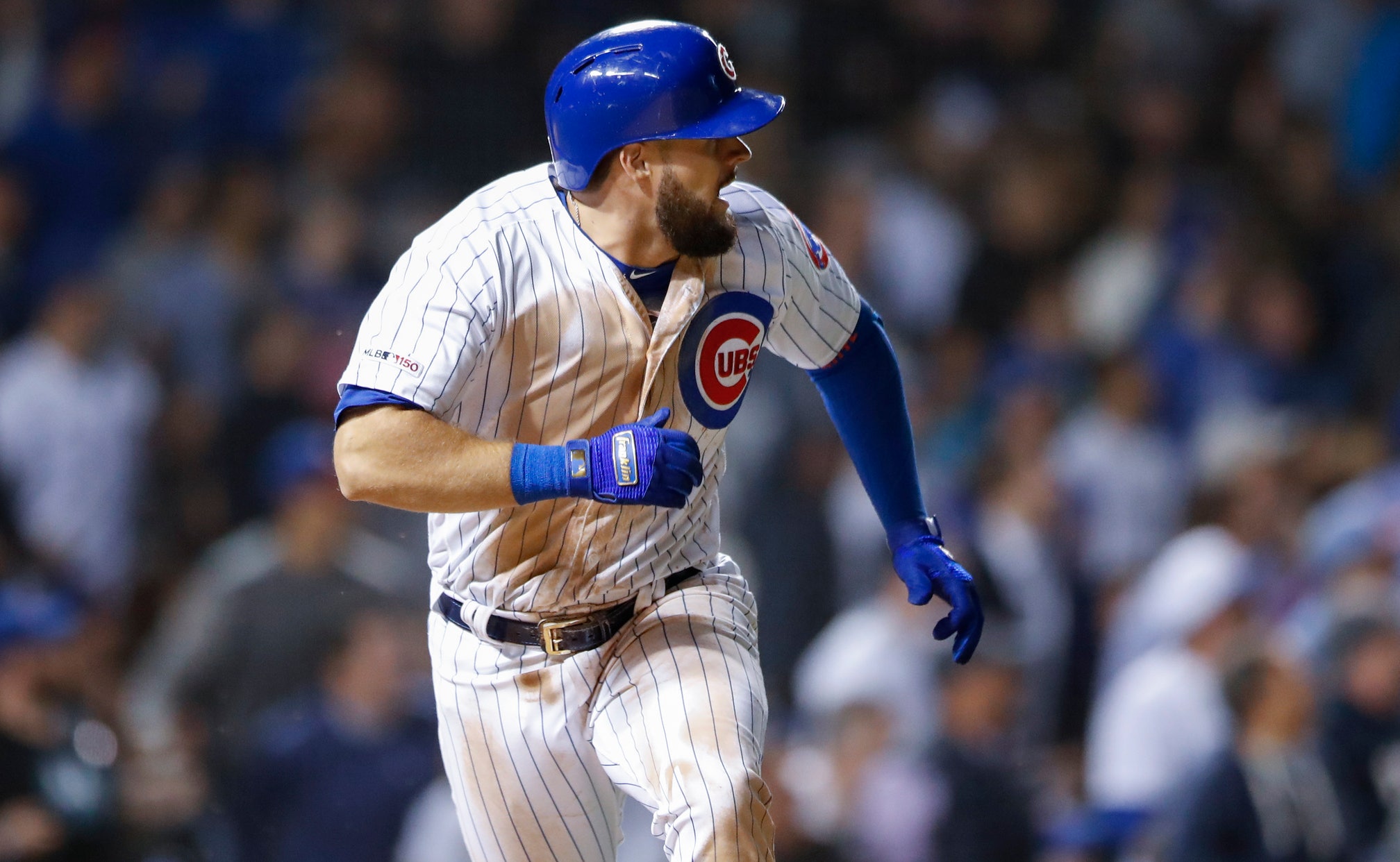 CHICAGO (AP) — David Bote's hitting has been on a solid upswing over the past two weeks. On Wednesday night, his production at the plate spiked.

Bote drove in a career-high seven runs to lead the Chicago Cubs to a 9-8 win over the Colorado Rockies.

The Cubs second-baseman had four hits, including a three-run homer and bases-clearing double as the Cubs handed the Rockies a second straight loss after ending their season-high eight-game winning streak Tuesday.

In his last 12 games, Bote is batting .451 with three homers and 13 RBIs. And against Colorado, he did all the damage batting eighth.

"You never really expect it," Bote said. "The game is so hard. A lot of things have to go right for that to happen. A lot of guys up front (in the lineup) found a way to get on base all night long. I just happened to be the one who got the (pitching) mistakes."

He lined his seventh homer through the fog to left-center in the fifth inning to stake Chicago and Yu Darvish to a 3-0 lead. But the Rockies rallied for three runs off Darvish in the sixth to chase the right-hander and deny him his first win at Wrigley Field as a member of the Cubs.

Bote keyed a five-run rally in the sixth with his double to the left field corner that put Chicago up 8-3. He singled in a needed insurance run with two outs in the eighth to make it 9-7 after Colorado had trimmed the Cubs' lead to a run.

"He think he's befriended, re-friended, the right-center gap," Maddon said. "It's a shorter approach, it's a more handsy approach and it's a more centered approach and that's why I think we've see a better result."

Nolan Arenado drove in a run with a single in sixth to extend his hitting streak to 15 games and added an RBI on a sacrifice fly in Colorado's four-run seventh. David Dahl had three RBIs and three hits, including a triple and double.

Brandon Kintzler (2-0), the second of six Chicago relievers, got the final two outs of the sixth for the win. Steve Cishek allowed a run in the ninth before earning his sixth save in eight chances as the Rockies kept coming back, but fell just short

"I think we fight all the way through," Colorado manager Bud Black said "We had the winning run at the plate in the ninth inning that looked like it was going to go the other way.

"The resiliency of this team is really impressive so that's how we do it."

Darvish set down 10 of the Rockies first 11 batters and didn't allow a hit until Daniel Murphy grounded a single to left with two outs in the fourth. He ended up allowing three runs (two earned) in 5 1/3 innings in his seventh straight no decision.

"It's weird this game ended up 9-8 with these two pitchers pitching like they did in the early part of the game," Maddon said.

It was sunny and 70 degrees at Wrigley Field when Darvish threw the first pitch. The wind switched in the first inning, blowing steadily from the north and accounting for swirling fog and a 20 degree temperature drop.

"You had the mist, the London fog," Maddon said. "It was so weird I was looking or Stephen King in the stands somewhere."

Bote's seven RBIs where the most by a Cubs second baseman since Ryne Sandberg drove in seven runs on June 23, 1984.

Since signing a six-year $126 million contract with Chicago in February 2018, Darvish is 0-4 with six no-decisions in 10 starts at home. His last win this season was on April 29 at Arizona.

The Rockies plan to call up top pitching prospect Peter Lambert from Triple-A to start Thursday afternoon's series finale against the Cubs. The 22-year-old right hander will make his major league debut. The move allows the Rockies to push back RHP Jon Gray's next scheduled start to Saturday against the Mets in New York. Gray is dealing with blister on his pitching hand.

Rockies: OF Charlie Blackmon, out since May 24 (right calf strain) began a two-game rehab stint with Triple-A Albuquerque at Omaha on Wednesday. Manager Bud Black said Blackmon will be re-evaluated after Thursday's game. He was eligible to come off the 10-day IL on Tuesday. . RHP Wade Davis, on the IL since May 22 (oblique strain), faced live hitters off the Wrigley Field mound on Wednesday afternoon. Black said Davis "threw the ball really well" and that the team would make a decision on next step in the next day or two.

UP NEXT: RHP Lambert will face Cubs LHP José Quintana (4-4, 3.78) on Thursday. Quintana has lost his last three decisions over five starts and has a 4.33 ERA over that span.