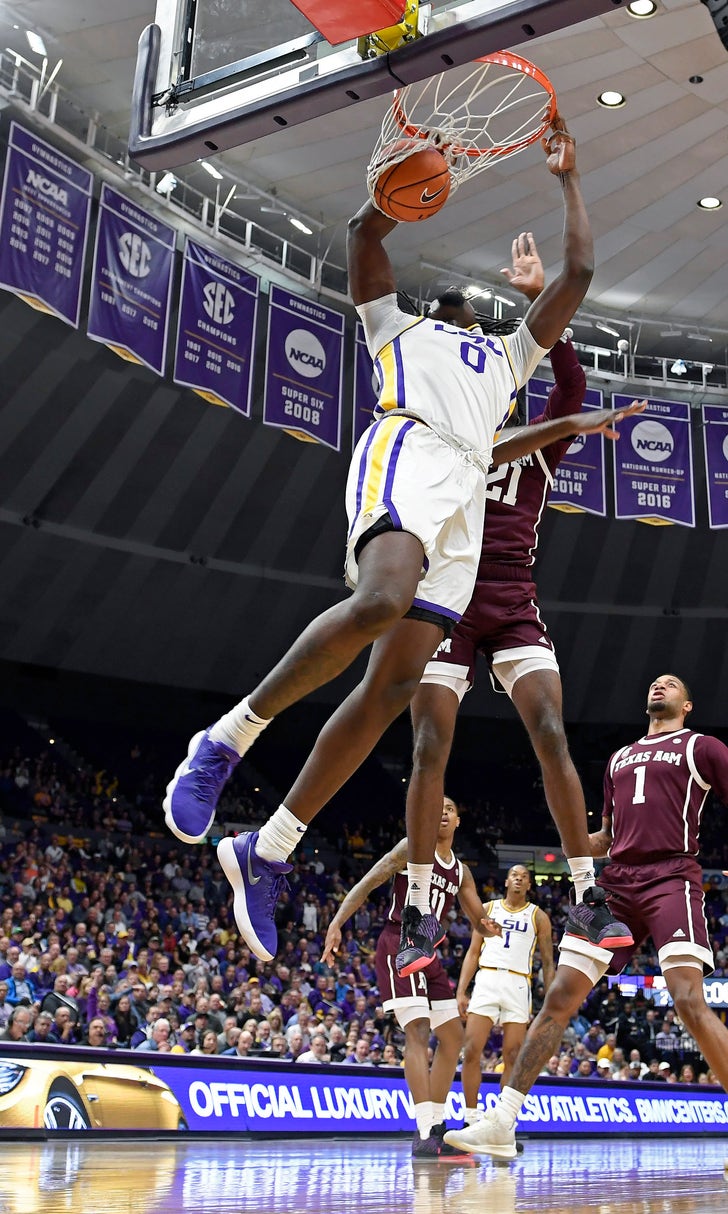 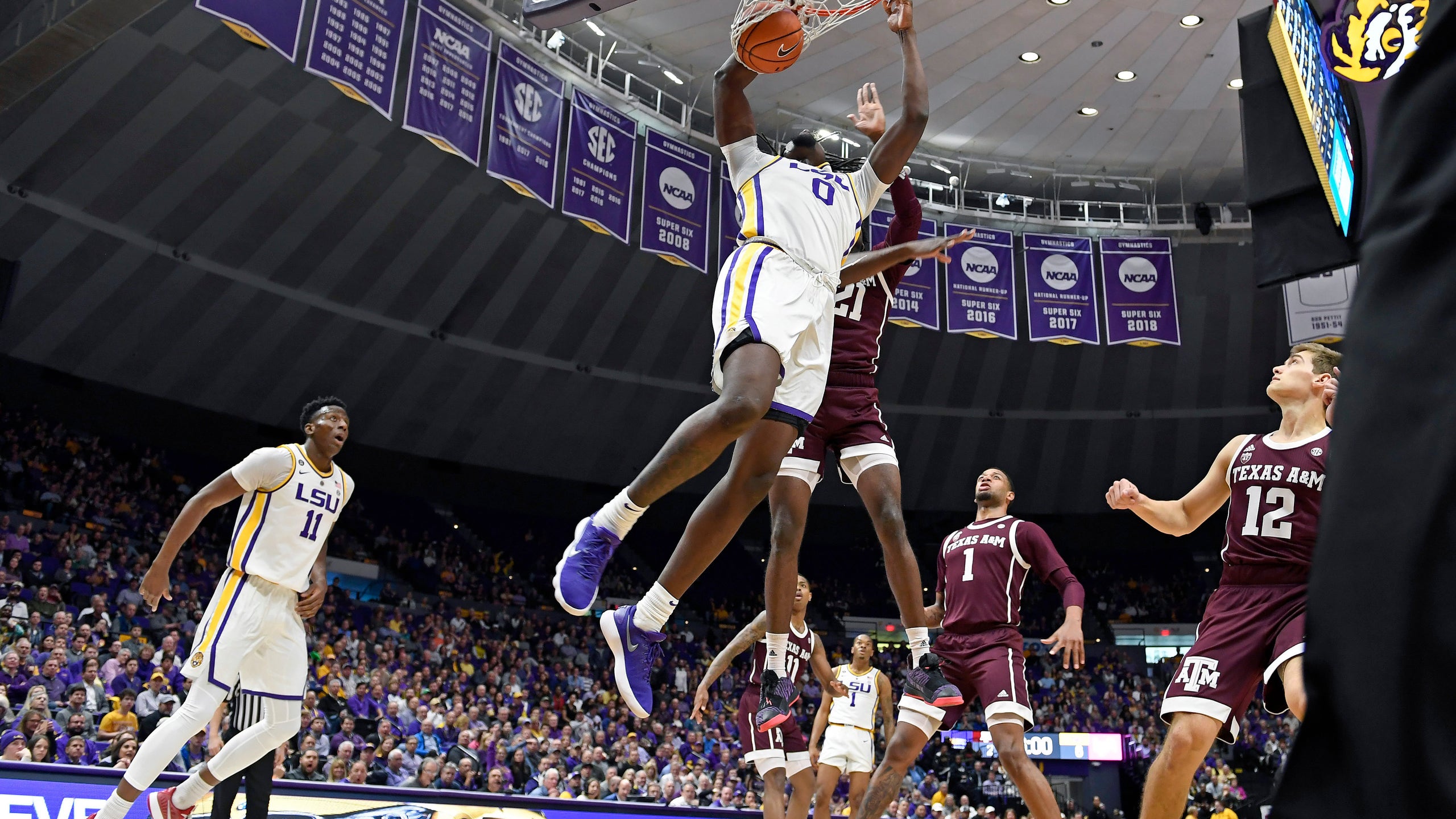 BATON ROUGE, La. (AP) — Naz Reid's path to redemption began straight down the middle of the lane for a two-handed, rim-rattling dunk.

Reid bounced back from his least productive game this season by scoring 18 points and grabbing 11 rebounds, and No. 13 LSU comfortably defeated Texas A&M 66-55 on Tuesday night.

"All I can do is laugh," the versatile 6-foot-10 freshman said about his 0-for-9-shooting, one-point performance against Tennessee last weekend. "But I was able to come out tonight and my teammates helped me score the ball and rebound, so that's what I did."

Freshman Javonte Smart turned in a second straight productive start in place of ailing point guard Tremont Waters, scoring 17 for the Tigers (23-5, 13-2 Southeastern Conference), who led by double digits most of the way and never trailed en route to their 16th victory in 18 games.

Wendell Mitchell scored 14 and Christian Mekowulu had 11 for the Aggies (12-15, 5-10), who seemed to be hitting their stride recently, having won four of five when then they arrived in Baton Rouge to take on a team sharing first place in the SEC.

"I was really impressed with LSU's defensive intensity. Their entire defense is really hard to score against," Aggies coach Billy Kennedy said. "In the first half we had 10 turnovers and we shot too many 3s, but it had to do with LSU's defense."

The result marked the fewest points LSU had scored or allowed in an SEC game this season. But the Tigers, who usually score around 80 points per game, were able to use their athleticism and aggressiveness to impose their will in the paint, where they outscored the Aggies 40-22.

"We won the game the way I like to win," said LSU coach Will Wade, noting his team's 18 points on 21 free throws in addition to all the points in the paint. "I like the fact we're able to win in different ways."

Kavell Bigby-Williams threw down a pair of two-handed dunks in the opening minutes and finished with 10 points and 11 rebounds. Marlon Taylor dunked four times and had goaltending called against A&M on another dunk attempt to give him 10 points.

Texas A&M appeared to be threatening when Brandon Mahan soared along the baseline for a tip-in that cut LSU's lead from a high of 20 late in the first half down to 10, at 47-37.

Smart answered with a driving layup. Shortly after, Emmitt Williams rejected Josh Nebo inside, and while the crowd was cheering that play, Smart hit a 3 on other end.

Smart, whose breakout, 29-point performance led LSU past Tennessee when Waters was out with an undisclosed illness, continued to assert himself against A&M with a nearly end-to-end reverse layup that gave LSU a 15-point lead inside the final nine minutes.

"Saturday I had a big opportunity to help our team win," Smart said. "The next day ... coach said, 'If you work hard, you've got to continue to work hard. Don't let one (big) game stop you from doing what you've been doing.' So, I just continued to work hard and came into this game ready to win."

With one game remaining this week, LSU could make a case to climb into the top 10 before the next AP Top 25 Poll comes out on Monday.

Texas A&M: Fell to 2-5 in SEC road games this season. ... In the minute of the first half, T.J. Starks hurt his right shoulder in a collision near the LSU basket. He was seen by trainers before being escorted to the locker room and did not return. "It's pretty serious. They took him to the hospital and I don't know if it's separated or not,"Kennedy said. ... Zach Walker was assessed a technical foul in the first half after yelling at Williams.

LSU: Waters, who has led LSU in scoring this season with 15.7 points per game, missed his second straight game with an undisclosed illness. Unlike the previous game, when Waters was not seen in the arena, he showed up near the end of warm-ups and watched from the bench before joining teammates in a pregame huddle. Wade "It was our call to sit him tonight," Wade said. "He probably could have maybe played a little bit, but he hadn't practiced and hadn't been real active so we didn't think it would be fair to him or the team." ... This is the fourth LSU team to win at least 23 games in a season. The 1981 team won the most at 27.

LSU junior guard Skyler Mays, who had 11 points, surpassed 1,000 for his career on a technical free throw in the first half.

"Apropos he made it on a free throw," Wade said, calling Mays the team's best free throw shooter. "Very happy for him. Just shows his consistency and how hard he works."

A Case of the Blues
On Monday, the three most famous blue blood programs – Duke, UNC and Kentucky – made history for all the wrong reasons.
17 hours ago