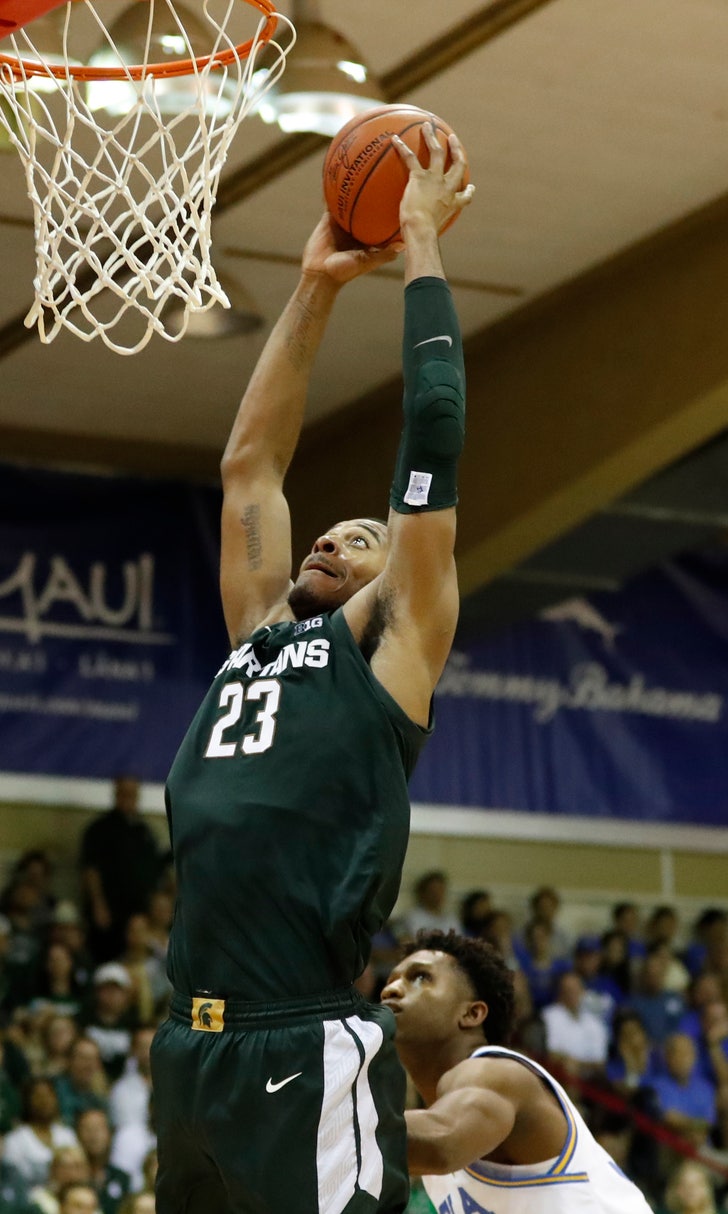 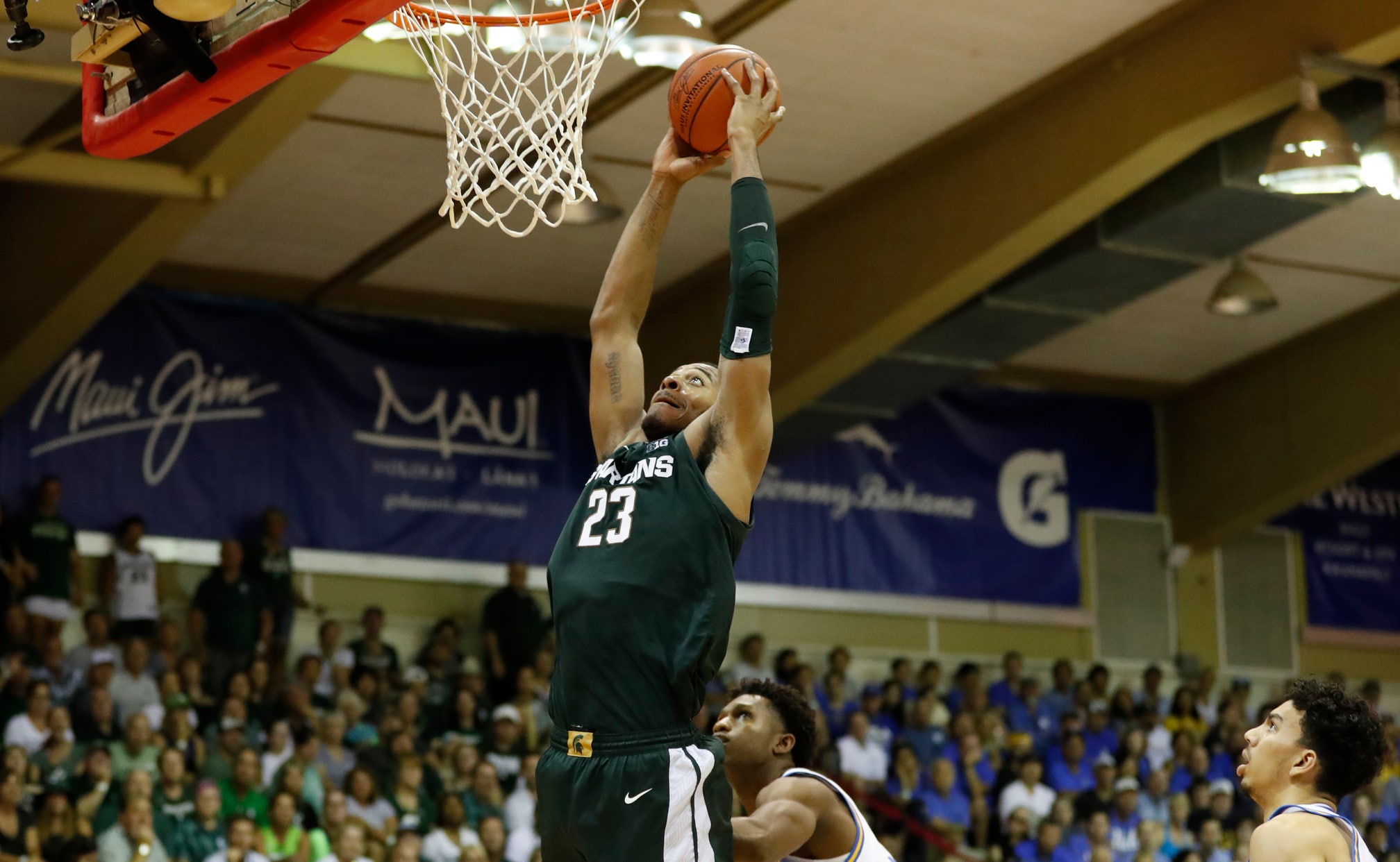 LAHAINA, Hawaii (AP) — Devon Dotson scored 31 points, Udoka Azubuike had seven of his 29 in overtime and No. 4 Kansas outlasted Dayton 90-84 to win its third Maui Invitational title on Wednesday.

The Flyers and Jayhawks spent much of the afternoon trading leads and highlight-reel plays in a bleacher-shaking atmosphere inside the bandbox Lahaina Civic Center.

Kansas (6-1) used a late 11-0 run to go up by three, but Dayton’s Jalen Crutcher buried a 3-pointer from about 5 feet behind the new, deeper arc with 2.1 seconds left in regulation to tie the game at 73.

The Jayhawks went to Azubuike early in the overtime and the 7-footer delivered, scoring three baskets at the rim. A 32% free throw shooter entering the game, he also hit three from the line in overtime.

The Spartans (5-2) opened the tournament with a loss to Virginia Tech, but bounced back with consecutive solid performances.

Winston had a second straight strong performance after struggling in the opener and Michigan State used an 18-2 advantage in fast break points to close its Maui trip with a flourish.

PARADISE ISLAND, Bahamas (AP) — Garrison Brooks scored 16 of his 20 points in the first half and North Carolina overwhelmed Alabama on the glass in a Battle 4 Atlantis first-round game.

Freshman big man Armando Bacot had 12 points and 15 rebounds for the Tar Heels (5-0), who entered the game as the nation’s No. 1 team in rebounding margin. The Tar Heels nearly doubled the Crimson Tide to finish with a 60-31 edge on the glass.

John Petty Jr. scored 23 points with seven 3-pointers for the Crimson Tide (2-3), though 15 points and five of those 3s came in the first half. Preseason all-Southeastern Conference pick Kira Lewis Jr. added 20 points.

The Cavaliers (7-0) played without starting guard Braxton Key, their second-leading scorer and top rebounder, after the school said he had wrist surgery and will be sidelined indefinitely. They also were without Kody Stattmann, another starter, who missed his fourth consecutive game with an undisclosed illness.

Maine (2-4) kept it close for much of the game, more because Virginia had trouble scoring than anything else.

Vilgot Larsson led the Black Bears with nine points. They finished 8 for 43 from the field (18.6%) and had 21 turnovers that led to 20 Cavaliers points.

PARADISE ISLAND, Bahamas (AP) — Corey Kispert broke loose from a brutal three-game shooting funk to match his career high with 28 points and hit seven 3-pointers as Gonzaga beat Southern Miss in the first round of the Battle 4 Atlantis.

Joel Ayayi added 21 points and 12 rebounds for the Bulldogs (7-0), who had no trouble against a team picked to finish last in Conference USA.

LaDavius Draine shook free of his own outside shooting struggles for Southern Miss, scoring 19 points and making 5 of 9 3-pointers after connecting on 6 of 26 through the team’s first five games.

PARADISE ISLAND, Bahamas (AP) — Shakur Juiston scored on a putback with 14.4 seconds left and Oregon rallied from 19 points down in the second half to beat Seton Hall 71-69 in the opening round of the Battle 4 Atlantis.

The Ducks (6-0) trailed 49-30 early in the second half but hung around despite a brilliant performance from Seton Hall’s Myles Powell, who had 32 points for the No. 2 scoring total in the nine-year history of the event.

Payton Pritchard led the Ducks with 16 points. With Oregon having a chance to go ahead, Pritchard airballed a 3-pointer — only to have the ball end up with Juiston underneath for the putback and Oregon’s first lead of the second half.

Seton Hall (4-2) had a final chance after C.J. Walker missed free throws with 5.3 seconds left, but Powell’s long running heave hit only the backboard to end it.